Vicki and I decided to tackle the Nine Peaks Challenge this summer. This is a trip that I’ve wanted to do for years, but never found the time. What with the 4th of July falling on an inconvenient Wednesday this year, we opted to take Thursday and Friday off from work and do the nine peaks in proper style. Do it in one day? Sorry, but that’s for athletes, masochists, and/or people in extraordinary physical condition. Do it in three days? That’s for young Boy Scouts with unlimited energy, who don’t know enough to treat their own blisters. But doing it in five days? Now, THAT’S a hike worthy of civilized people! And it still turned out to be a lot of hard work. But it sure was fun, and a great way to spend five days. Highly recommended.

Day 1: We arrived at the South Fork Trailhead at dawn on July 4th. It had just finished raining (a freak summer monsoonal rain) and everything smelled wet and fresh and clean. The weather service said that there would be a forty percent chance of thunderstorms that afternoon, but we didn’t care all that much. It would be hot and muggy by then and maybe they’d cool us off! It was our first time on this trail, and it was very scenic.

Ferns and pines on the South Fork Trail 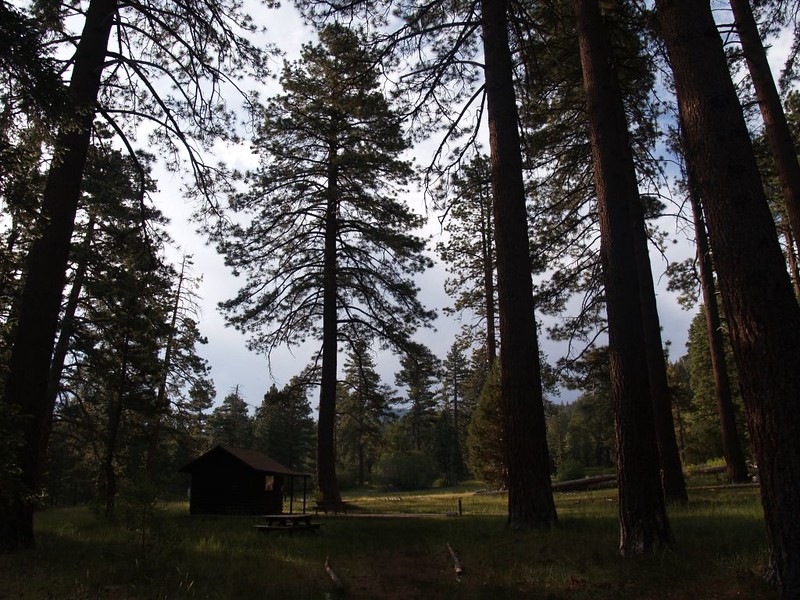 We hiked to Dry Lake and camped there. On the trail, we met the extremely helpful and friendly Ranger Bob. (He made me promise to post a trip report on the SGWA forum.) We stocked up on water at Lodgepole Spring and then day-hiked two gallons of it up to Mineshaft Saddle, where we cached the jugs for the next day. 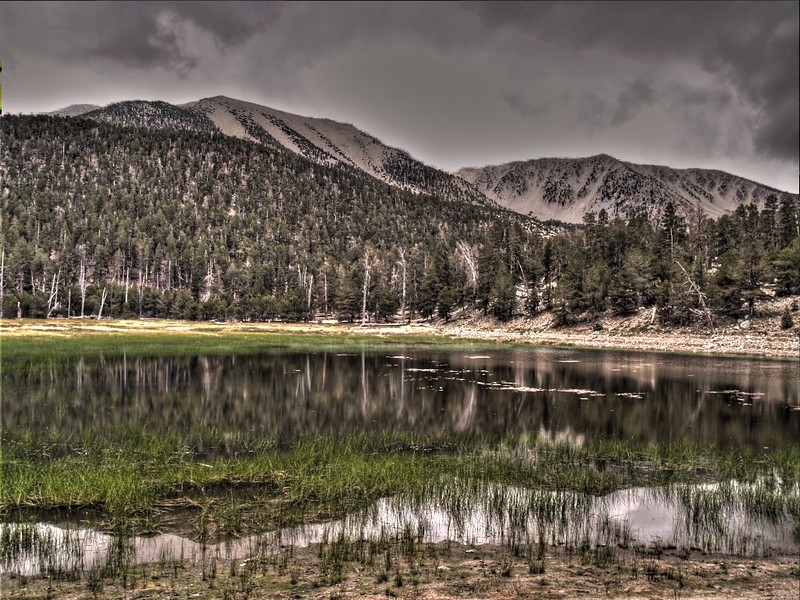 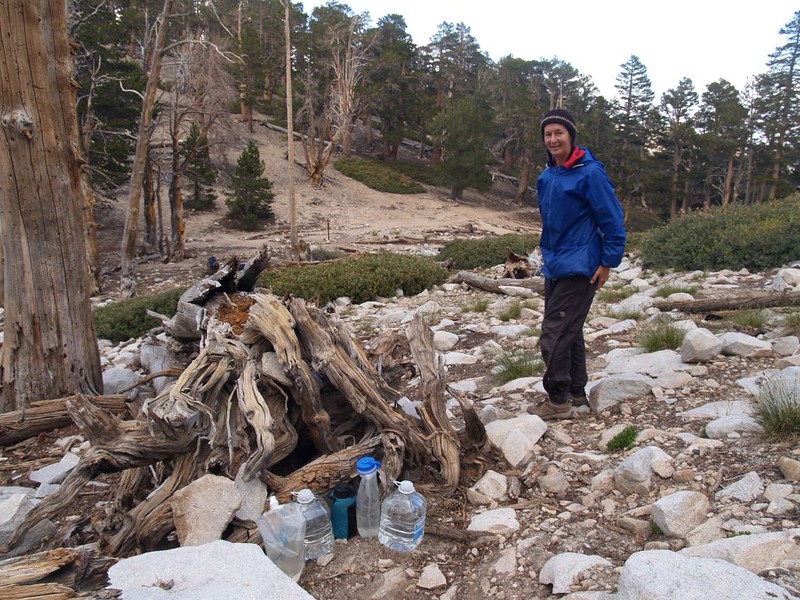 Stashing a cache of water at Mineshaft Saddle 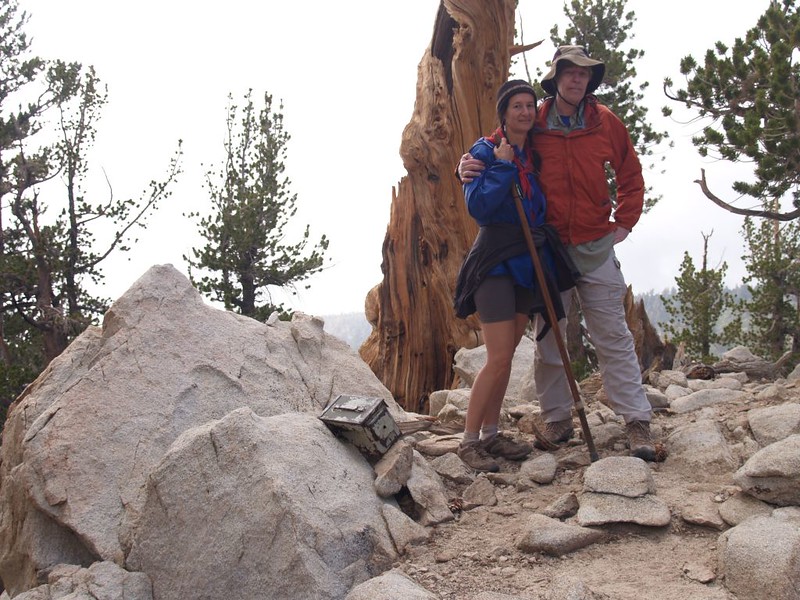 Vicki and I at the Zahniser Peak Summit, aka Peak 10056

On the second day we hiked up the Sky High Trail to the summit of San Gorgonio, where we camped. It was a long hot hike, especially burdened as I was with an extra sixteen pounds of water, but well worth it. As the afternoon progressed, cumulus clouds were building all around, and by the time we made the summit they were blowing gently by all around us. Very scenic. The wind picked up later that night, but it wasn’t all that bad, as it helped to blow the clouds away. 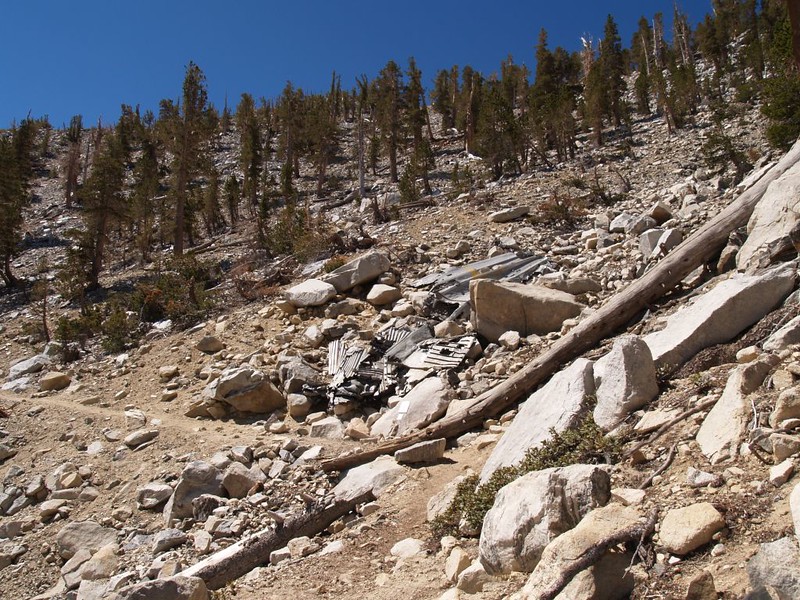 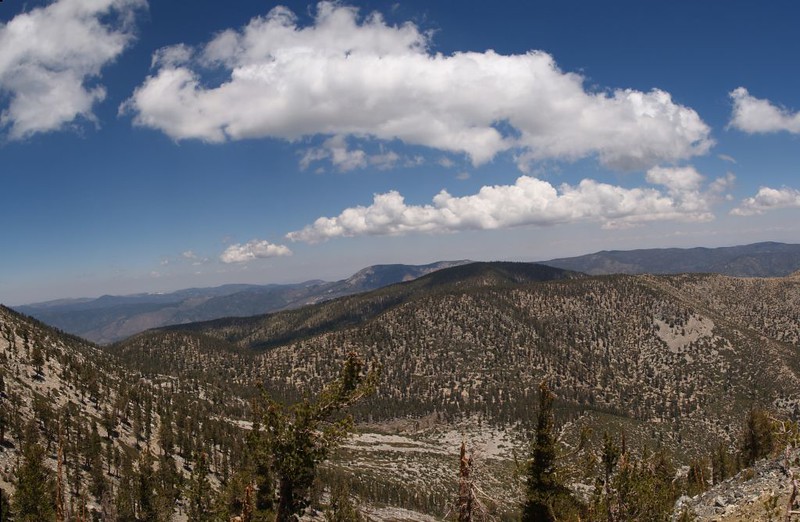 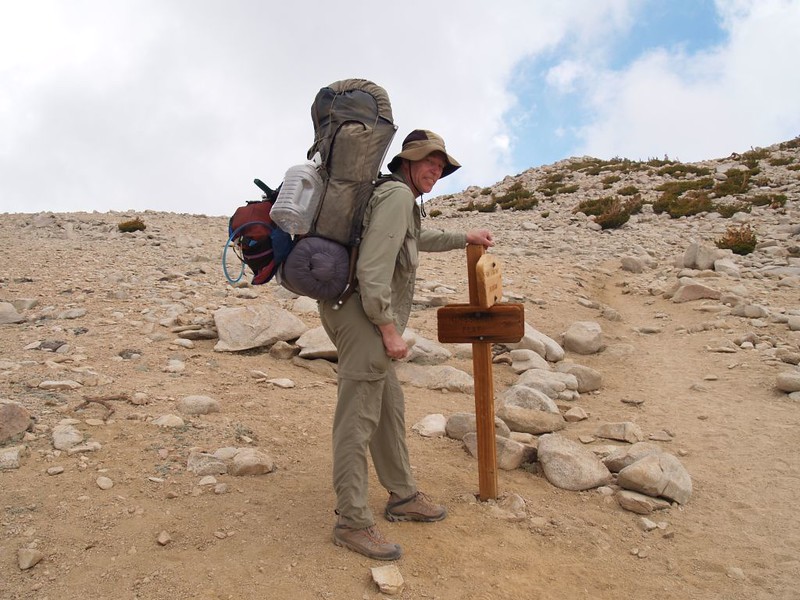 Me carrying extra weight at the junction of the Sky High Trail (1W07.3) and San Gorgonio Mountain Trail (1E02) 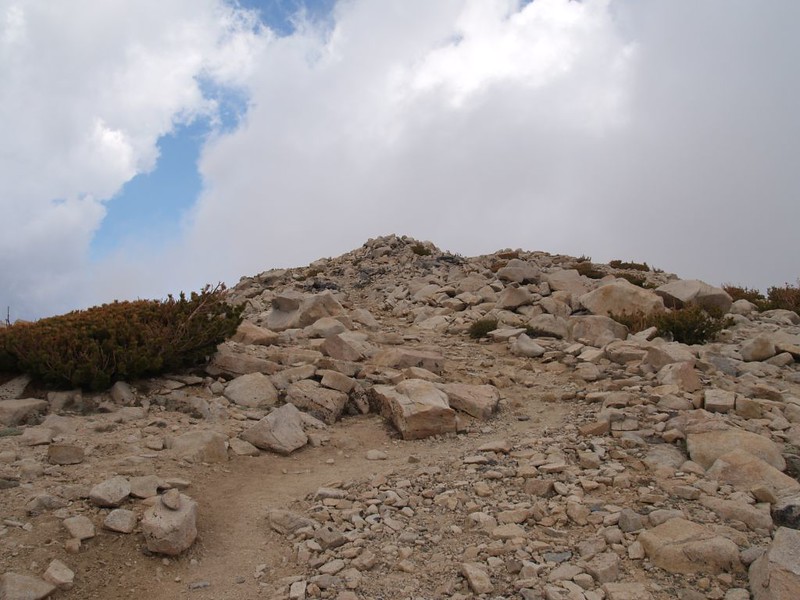 The final climb to the summit of San Gorgonio 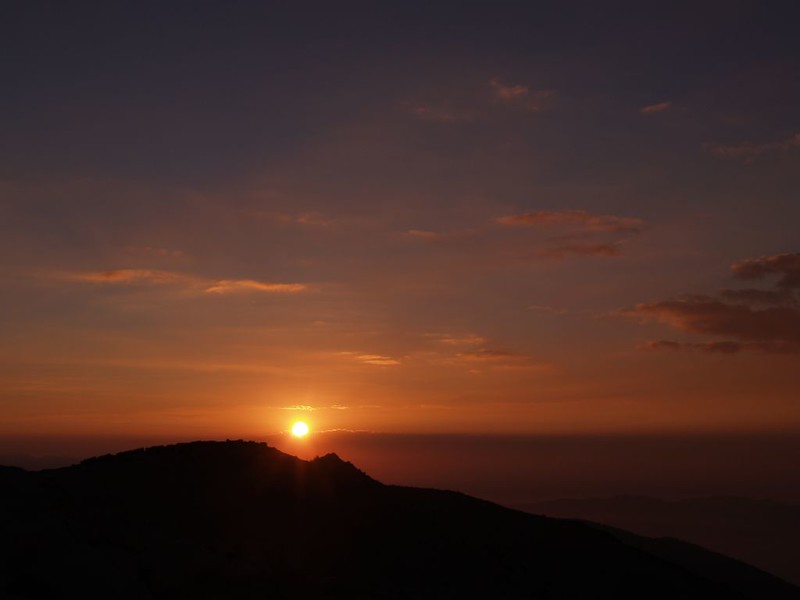 Sunset over Jepson Peak from the summit of San Gorgonio Mountain

Video of the summit wind on our tent in the morning

Day three consisted of bagging Jepson, Little Charlton, and Charlton Peaks. A much easier day than the previous two, as it was largely downhill. We camped at High Meadow Springs that night, and the water was flowing great. Tasty, too. What a beautiful place to camp! 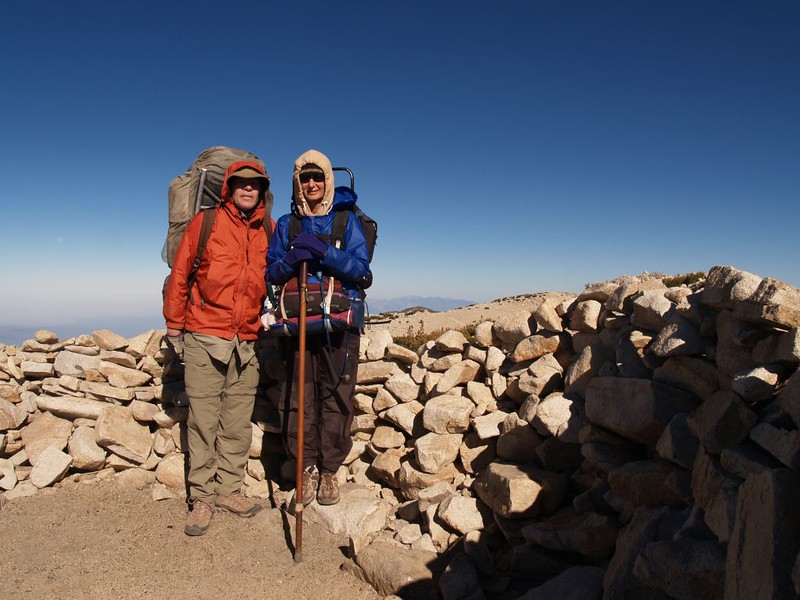 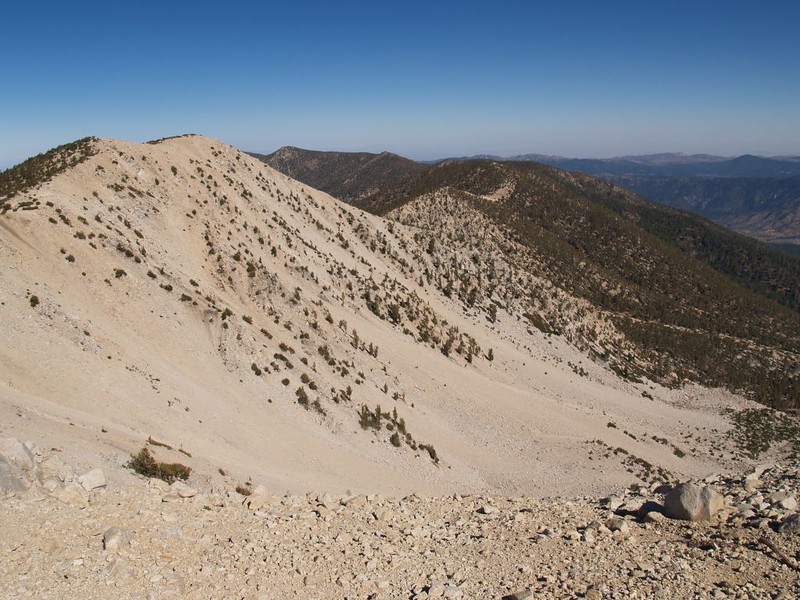 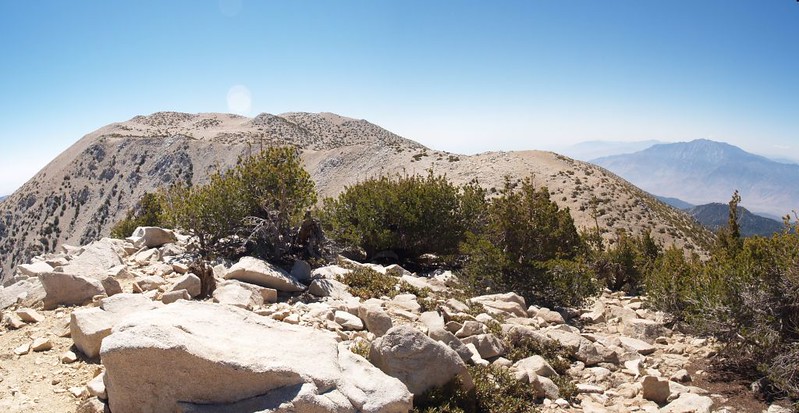 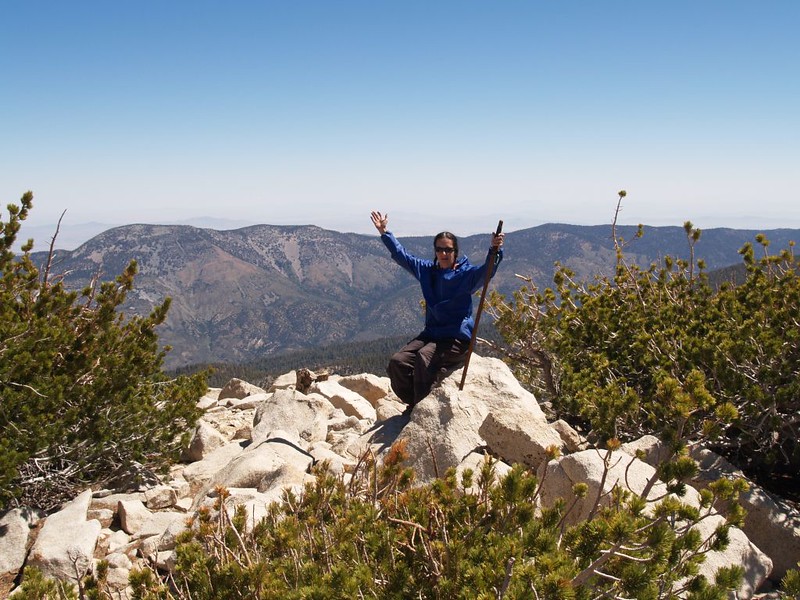 Vicki on the summit of Jepson Peak

I hope I got these peaks and elevations correct 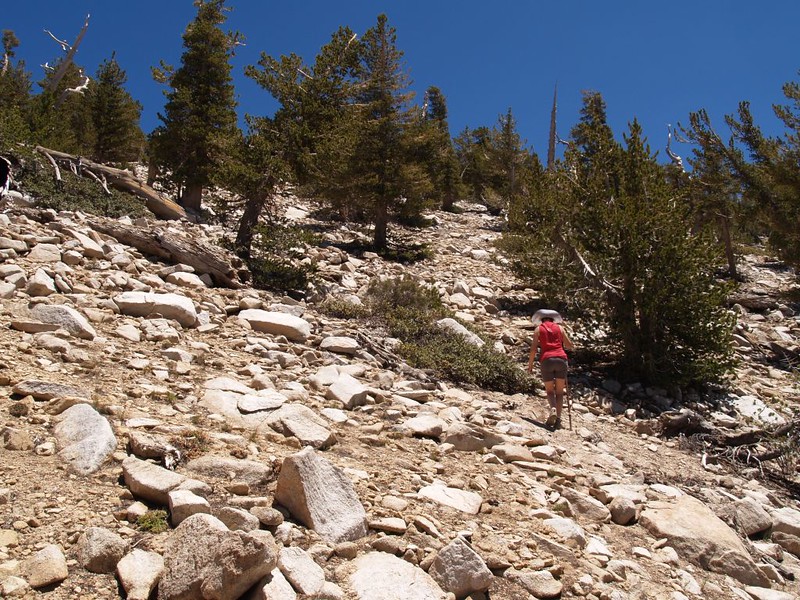 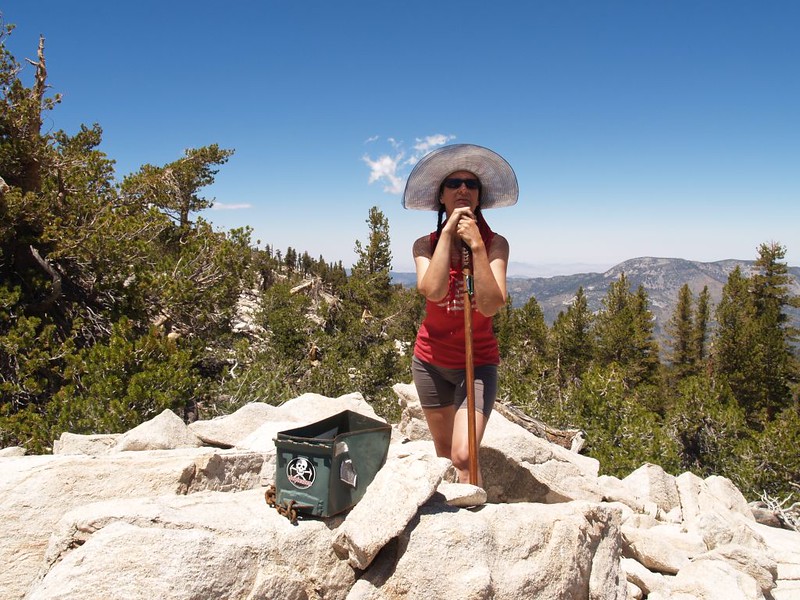 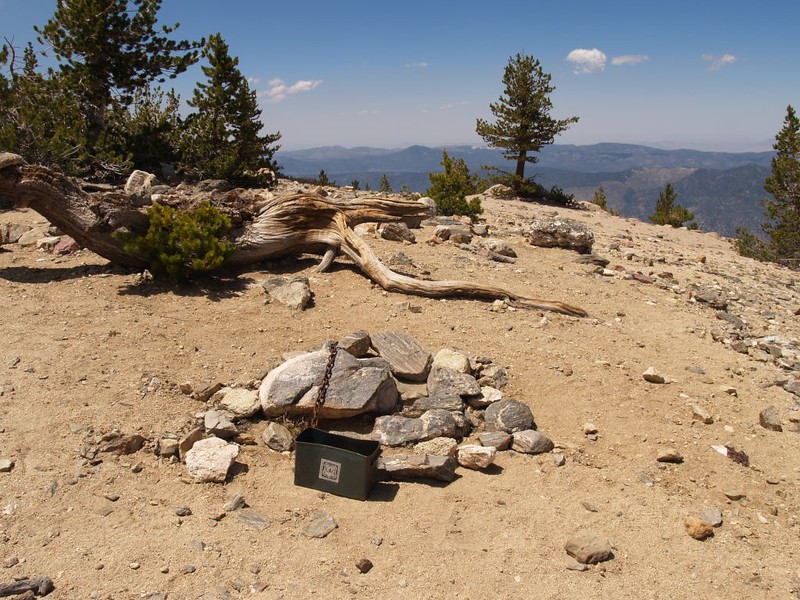 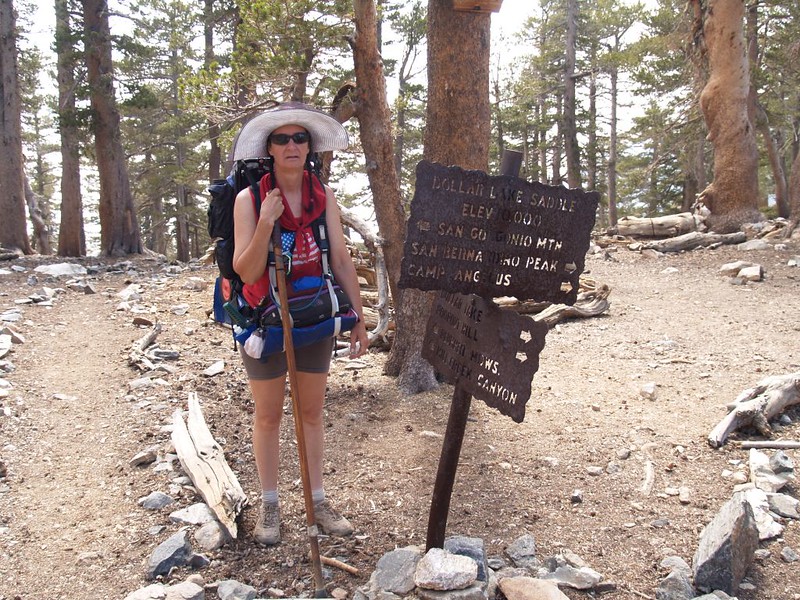 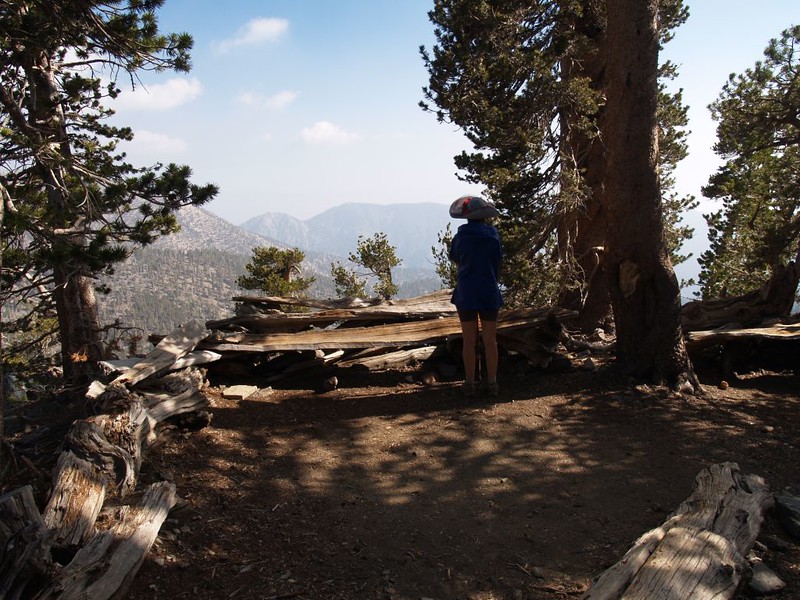 Campsite with a great view at High Meadow Springs

Video of the water flow at High Meadow Springs (this was only one of several small water streamlets):

On day four we bagged Alto Diablo and Shields Peaks, then set up camp at Trail Fork Springs. We day-hiked onward, summitting East San Bernardino and San Bernardino Peaks, then turned around and made our way to Anderson Peak. On the way back to camp we met Ranger Bob again, and we helped direct him and his partner to the last known location of what might be termed an “alternatively prepared” hiker. Later on, after dinner, we met him once more, as he was also camping at Trail Fork Springs that night. And this time he had an extra guest with him! All’s well that ends well.

Cooking breakfast on the rocky summit of Alto Diablo Peak 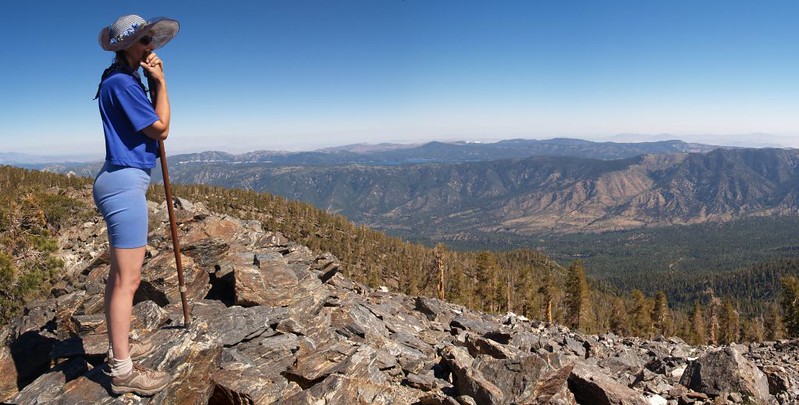 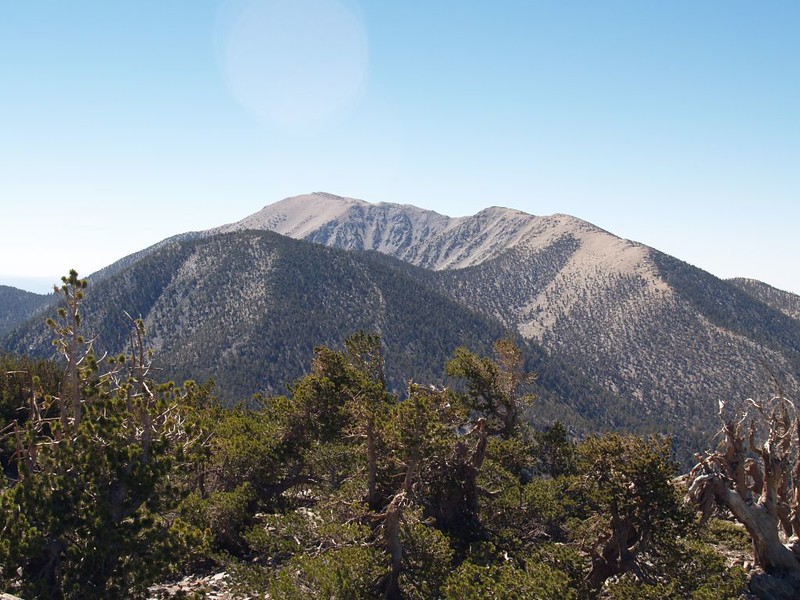 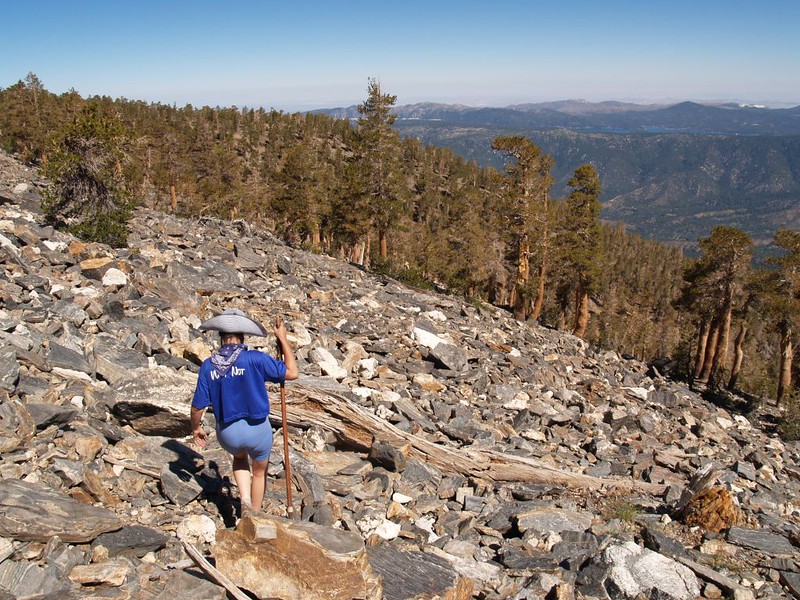 Carefully descending the talus slope of Shields Peak, toward our backpacks on the trail below 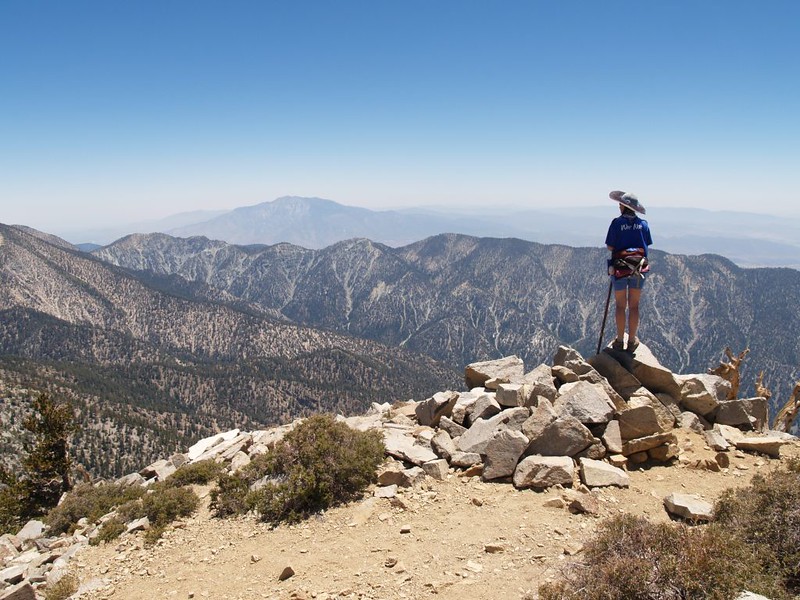 Panorama shot from the summit of East San Bernardino Peak

View back toward San Gorgonio from San Bernardino Peak 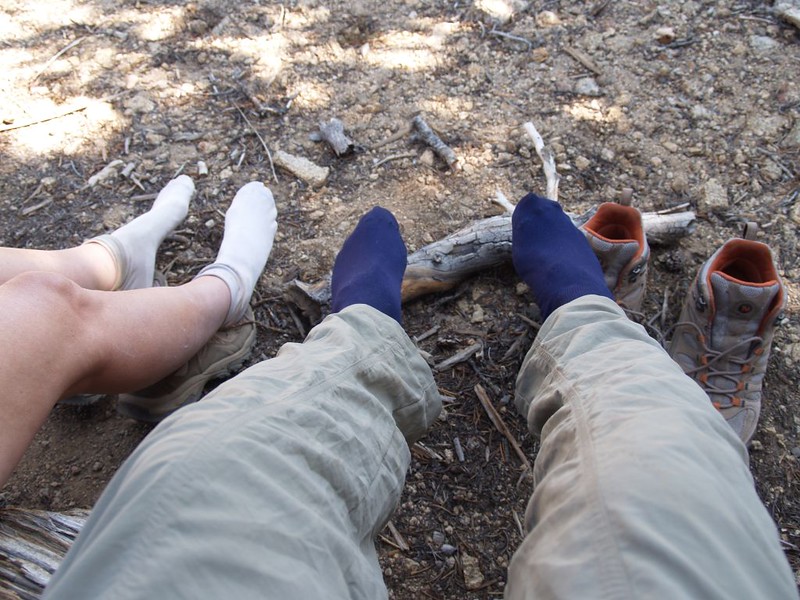 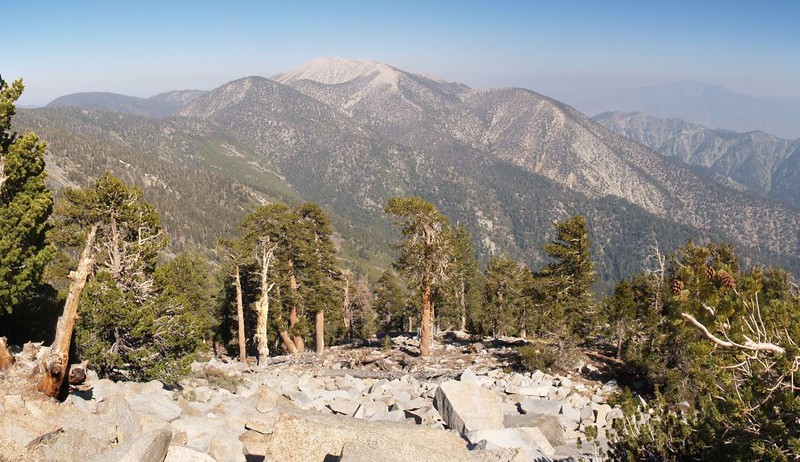 Video of the water flowing at Trail Fork Springs: 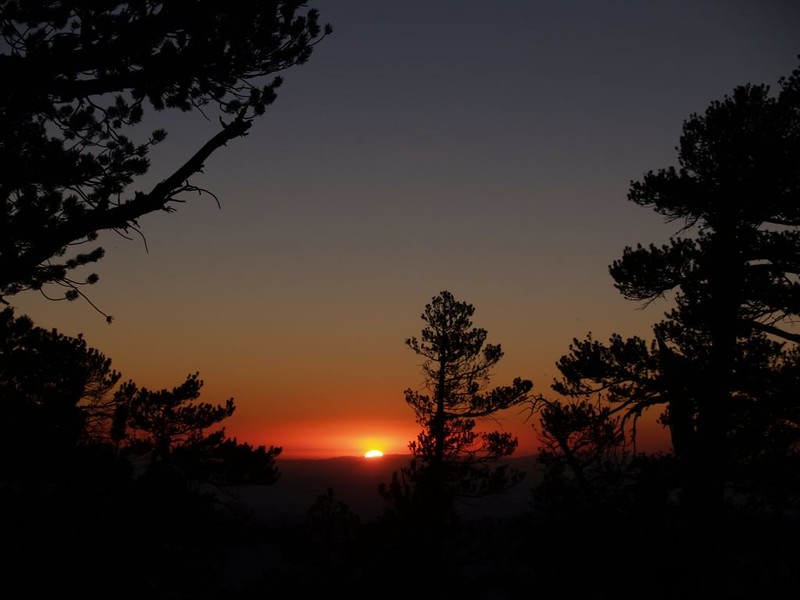 Day five saw us pack up early and hike like the wind down the Forsee Creek Trail. We were sure glad that we weren’t climbing uphill. Ranger Bob told us about a side trail located at the Wilderness Boundary sign which led us directly into the De Benneville Pines Campground. We followed the dirt roads in the camp down to Jenks Lake Road, which was a major short-cut. Thanks, Bob! We ditched our big packs behind a boulder and day-hiked up the road to our car at the South Fork Trailhead. We then drove back, loaded our packs into the car, and made our way to the Barton Flats Visitor Center, where I bought a San Bernardino National Forest T-Shirt and two official 9 Peaks Challenge patches.

Leave No Trace! You’d never know that we pitched our tent on this spot at Trail Fork Springs Camp…

This above shot is for Ranger Bob

Trees in the morning light while descending the Forsee Creek Trail 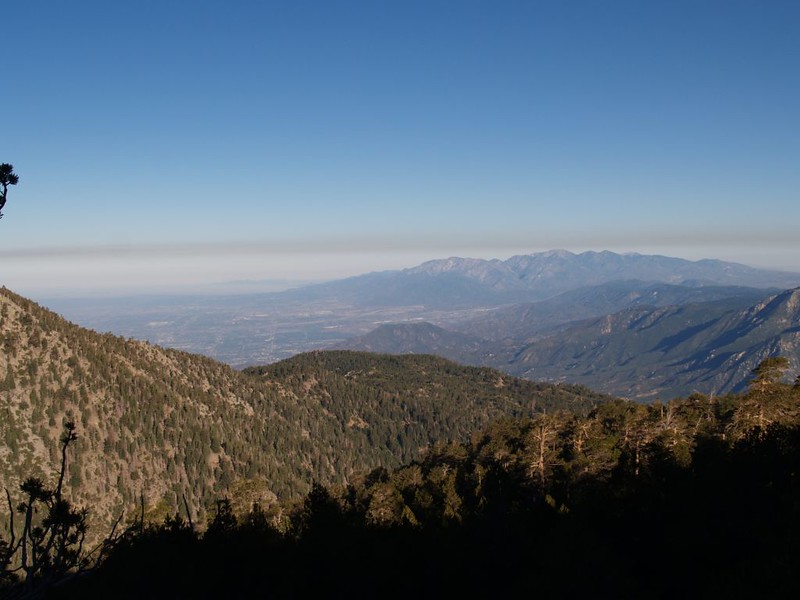 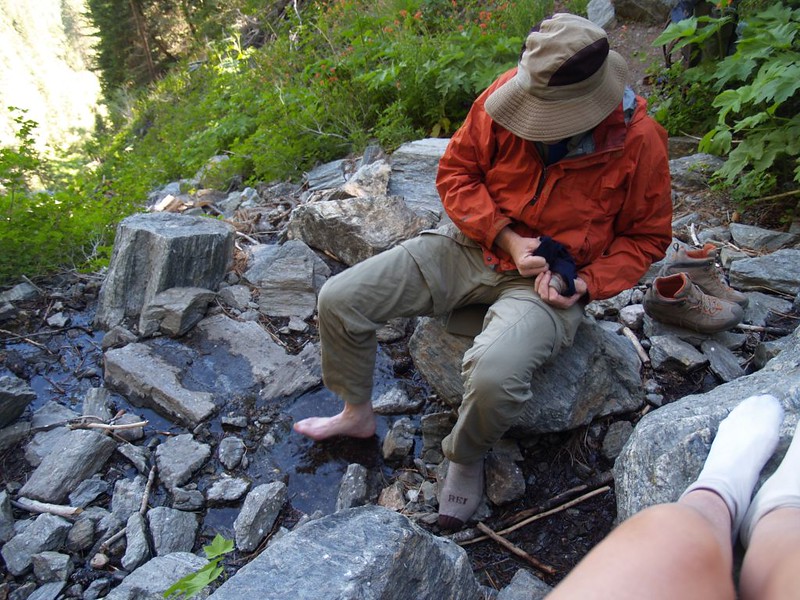 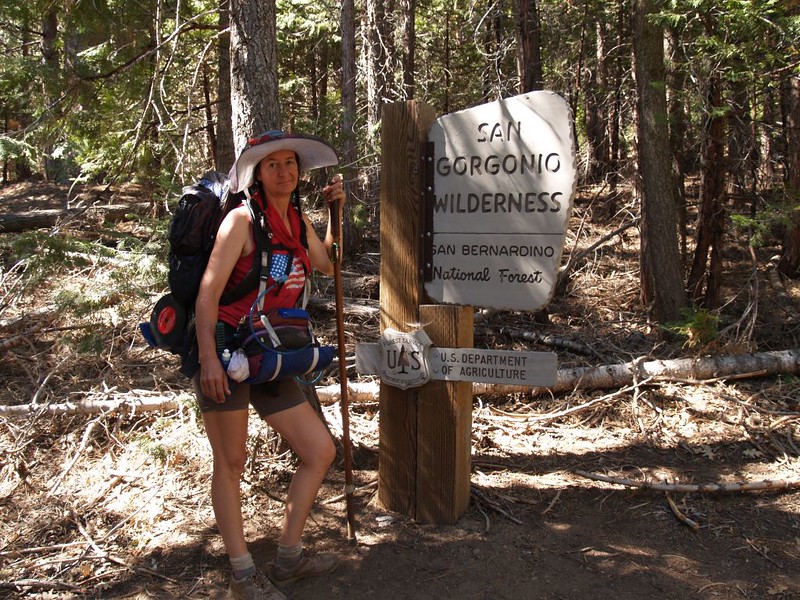 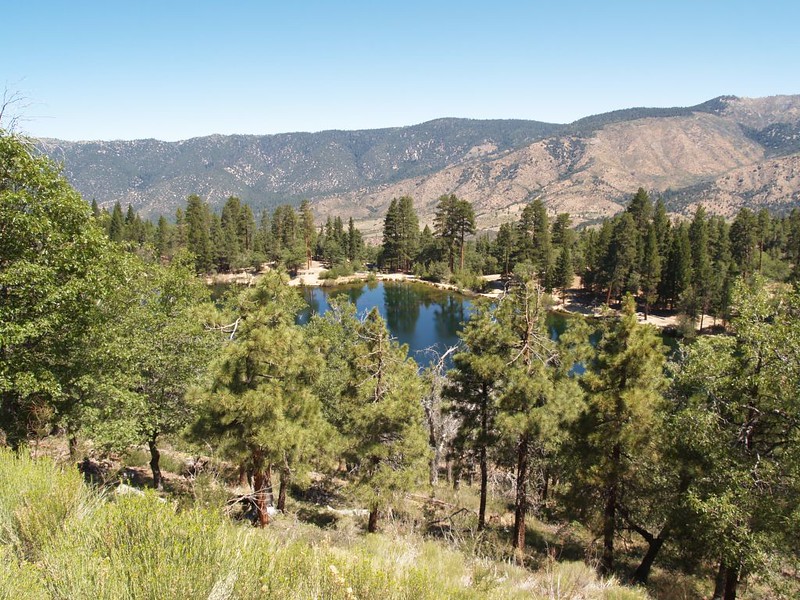 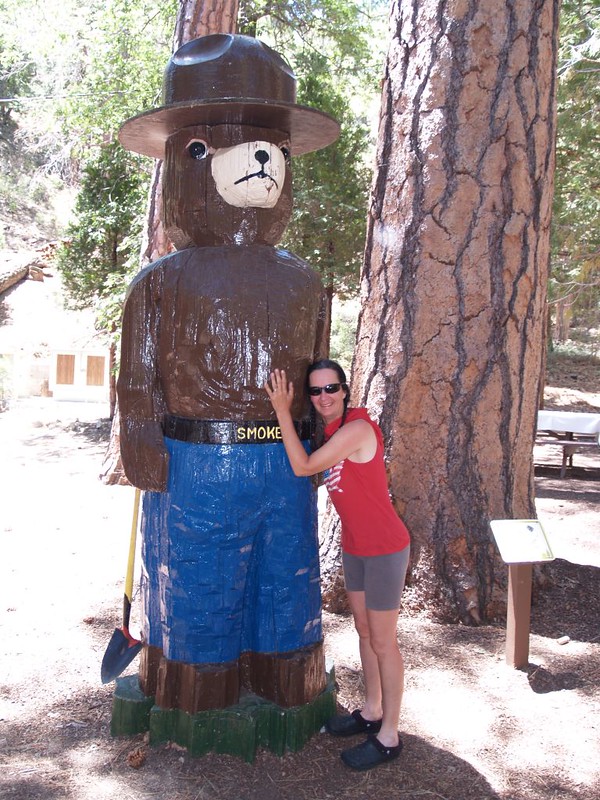 My relatively terse trip report/summary and WAY too many photos and videos are on my Flickr page.

I’d like to thank Hikin’ Jim for several acme mapper tips and the initial route planning. I’d also like to thank the SGWA and their forum for the excellent info on water sources and about the lack of snow on the summit this year. And, last but not least, a special thanks to Ranger Bob!

Delorme Topographic Map of our hike

You can also see the full-sized map here

And, just for completion’s sake, an interactive CalTopo Map, too!