We woke up Saturday at 3am and finally got out the door at 4:30 for the two and a half hour drive from San Diego to Icehouse Canyon. We’d never been there before, so as we stopped along Mt Baldy Road to take the obligatory pictures, car after car went past us, heading up-canyon. By the time we got to the trailhead, just after 7am, the parking lot was already full. 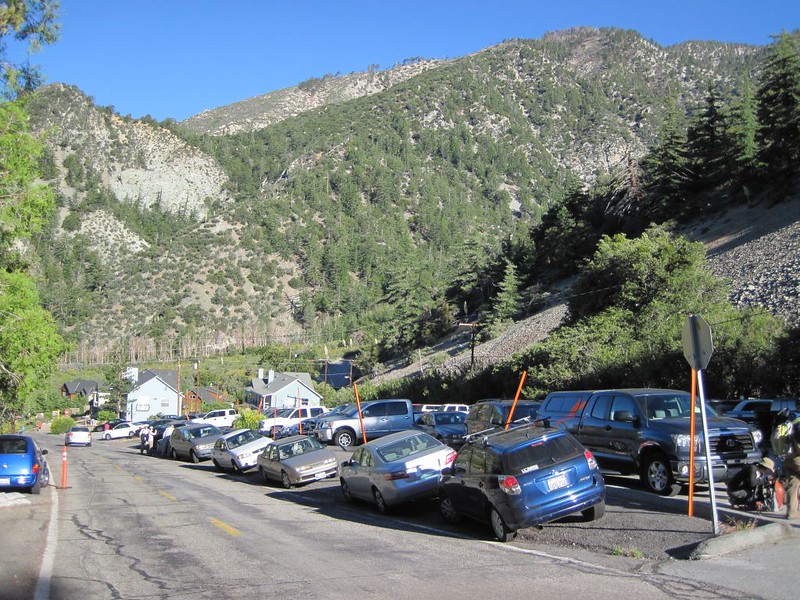 We parked in a semi-legal spot alongside the road at a crazy angle. The couple in the car in front assured us that they didn’t give tickets for parking there, so we displayed our trusty adventure pass and got ready to hike. By the time we changed shoes and donned our backpacks people were parking way down the street and hiking past us. 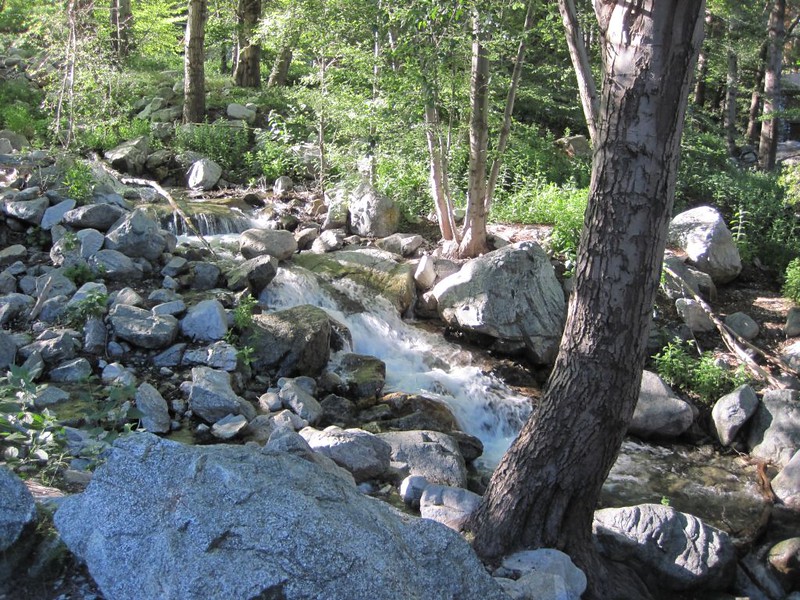 The icy stream in Icehouse Canyon 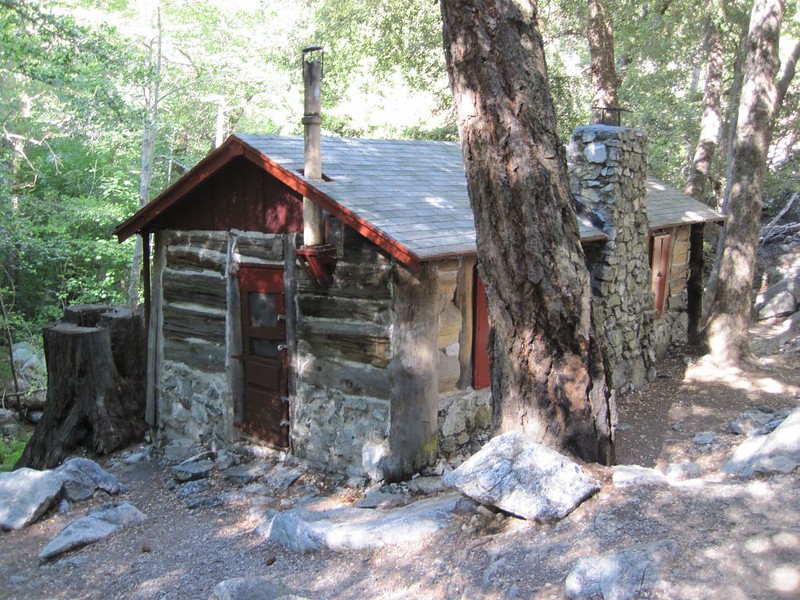 Old Cabin along the trail 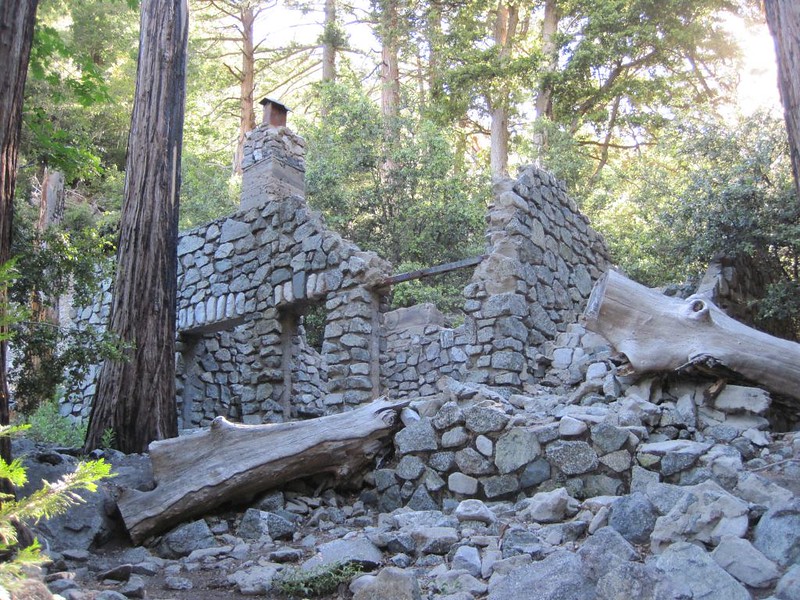 There were hordes of people. I’ve never seen so many on a trail; the San Jacinto Trail from the tram on a busy Saturday was deserted by comparison. And we were hiking slow, with full packs, so people were passing us constantly. Just the same, the beauty of Icehouse Canyon made up for it. Absolutely gorgeous: A rushing stream, quaint cabins, old ruins, big trees, and spring flowers. No wonder so many people were here! 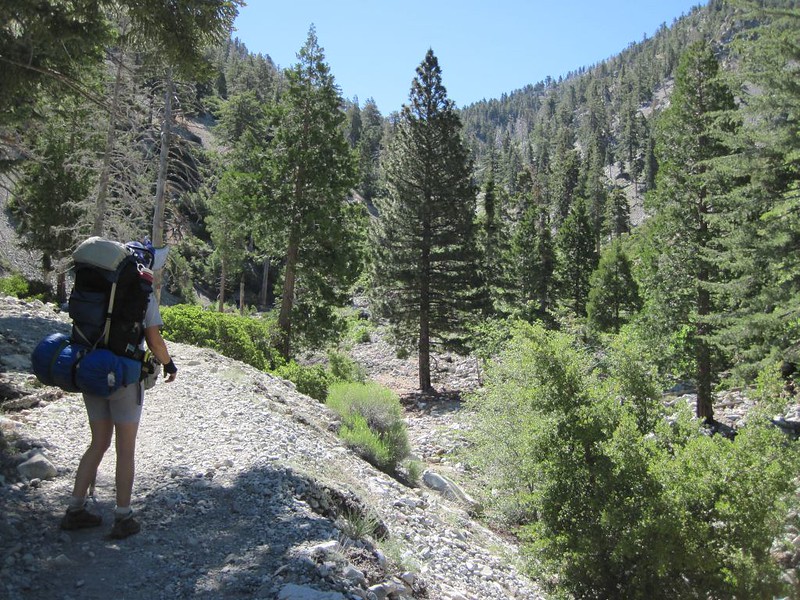 Looking up the Icehouse Canyon Trail toward the saddle 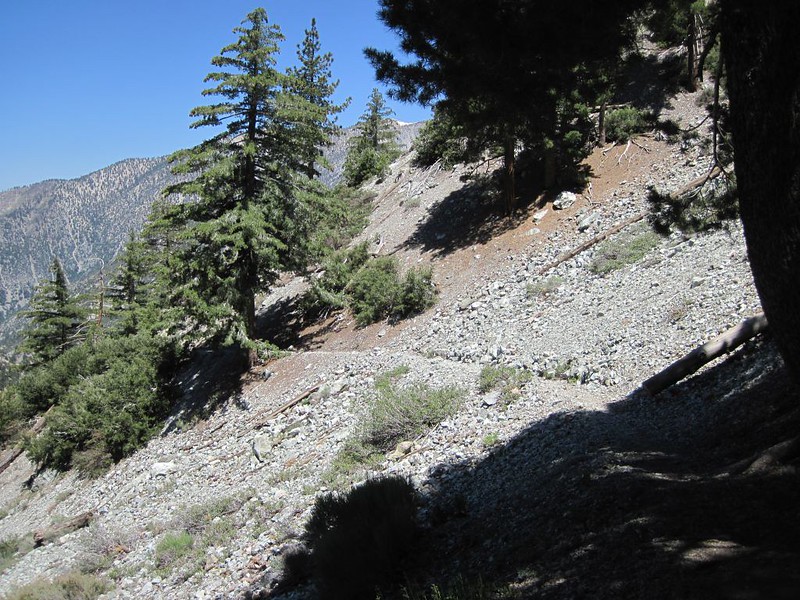 Looking back down-canyon, as we rested in the cool, shady zones

It was a good trail, not too steep, and we mosied along taking pictures, pointing out curiosities to each other, and chatting with the typically friendly people that love the outdoors. True, we would rather have been alone on the trail, but since we weren’t, we had fun with the other hikers. Why not? Life’s too short to spend it with a bad attitude. And with 50 pounds on my back (only 30 on Vicki’s), we rested whenever we felt like it. Just the same, when we got to Icehouse Saddle for lunch, it was so crowded that we decided to continue on. Enough was enough. 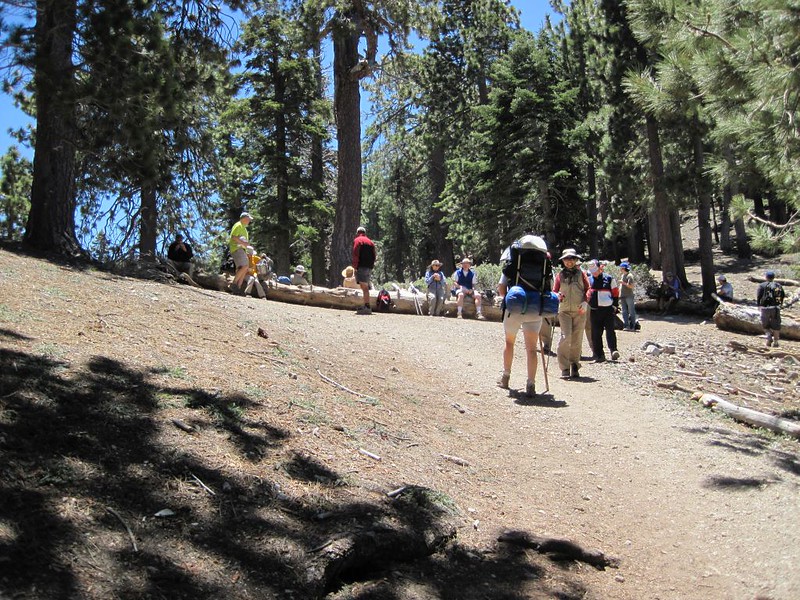 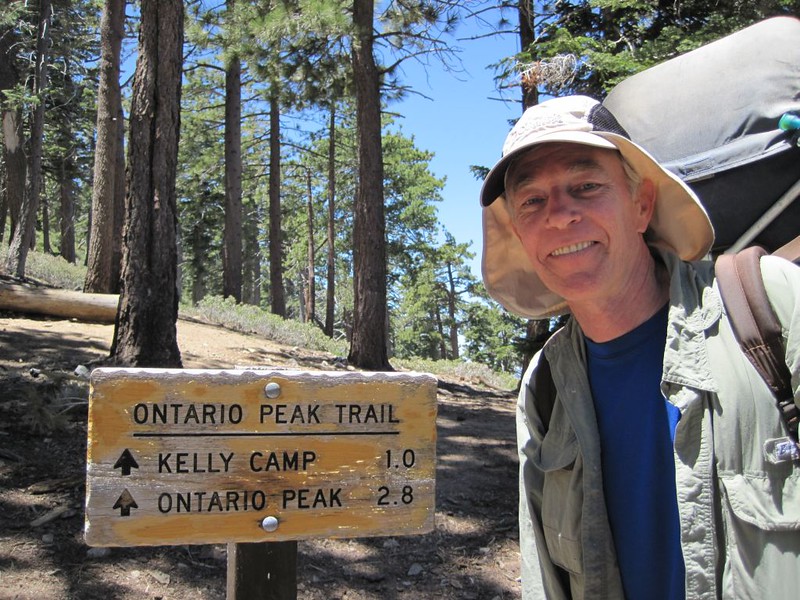 Heading on to Kelly Camp, only a mile to go, and an easy hike

Our destination was Kelly Camp, within the Cucamonga Wilderness, about four miles and 2700 feet of climbing from the trailhead. There were many tents and several groups already in camp by the time we got there. But, as we planned to spend two nights, we weren’t too worried about crowds; we figured the campsite would be deserted by Sunday night. And it was! 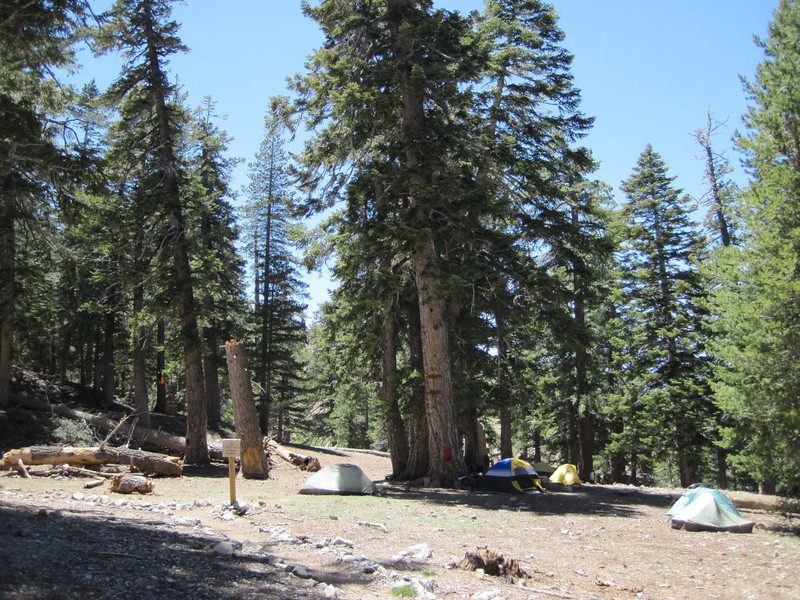 Kelly Camp with groups of tents

I’d read on the eispiraten.com forum that the spring at Kelly Camp wasn’t working, so I’d hiked with four liters of water, and was prepared to hike back down the canyon for more. No wonder my pack was so heavy! But I needn’t have. The spring was running fine. Of course, it wasn’t coming out of the pipe, as the pipe may be frozen underground, but it was pouring out of the ground a few feet above it at quite a decent rate. The pipe was dripping about one drop every three seconds. The other, smaller pipe was dripping about once every ten seconds. We pumped lots of water from the pool below the large pipe, and concluded that the pipe may well be frozen: The water was freezing cold! 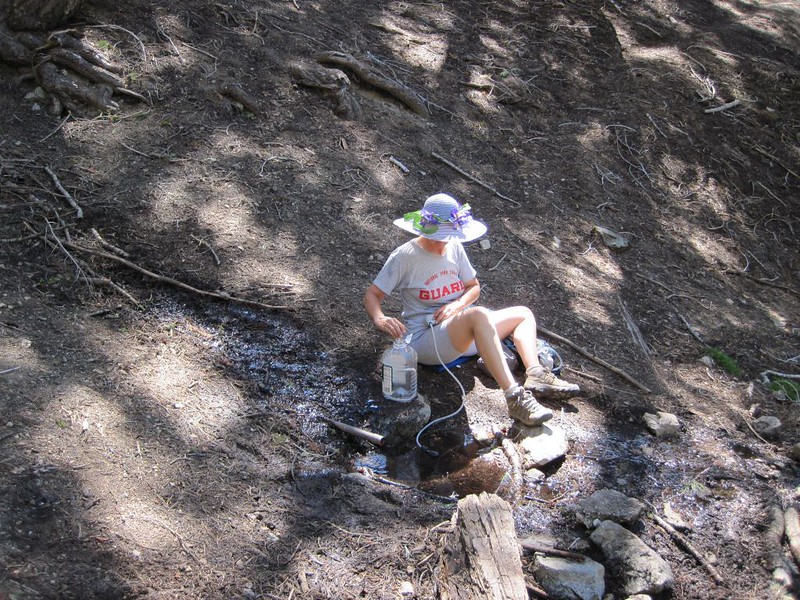 Vicki filtering water from the spring

It was still early, so we hiked up the trail to the ridge overlooking LA. It was a typically hazy view, but it felt good to be far above the city. I turned on my cell, got some bars, and sent a text to the kids: “We’re at 8000 feet!” I turned it off immediately, as I didn’t want a reply. The rest of the world could go hang, for all I cared. We went back to camp, had a Mountain House freeze-dried “Pasta Primavera” dinner, and went into the tent to get away from the tiny flies. They weren’t as bad as I’ve seen them in years past, but they weren’t fun. 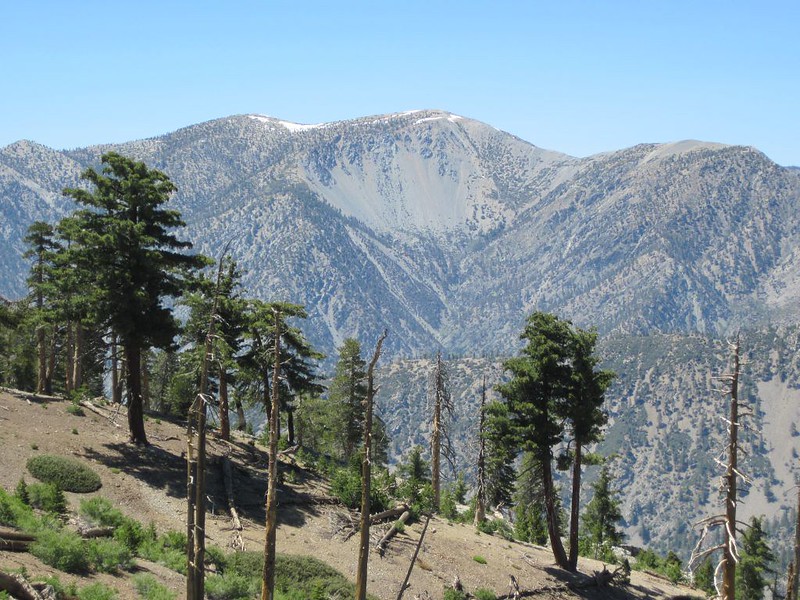 Zoomed-in view of Mount Baldy from the trail above camp

It was still light, about 6pm, but after ten minutes of reading a book I was asleep. I vaguely recall hearing the voices of the other people as they ate dinner and came to the spring for water, but I was pretty much out cold; it had been a long day. Vicki told me the next morning that one group actually washed their dishes right in the pool of the spring where we’d pumped our water! Sad but true. Didn’t they read the rules that came with their permit? Or maybe they didn’t know how to read… Anyway, we’d already pumped every container full, so we were set for a full day’s hiking. The pool would be long flushed out by the time we needed more. 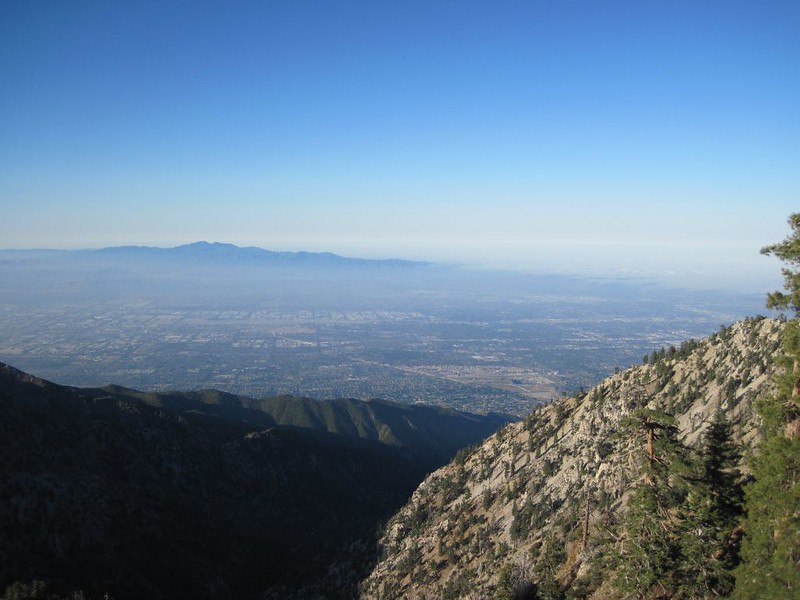 We woke up just after dawn, had breakfast, and got ready to bag some peaks. We went further up the trail and summitted Ontario Peak. There were great views of the marine layer clouds receding toward the coast of LA, Cucamonga peak to the east, Baldy and Telegraph to the north, and just peeking out above West Baldy was Mt. Baden-Powell, which I’d climbed several times in past years. Baldy still had some snow on top, which was nice to see. There were only a couple of patches left at this elevation, and only on protected shaded areas. We’d planned to follow the ridge back and bag Bighorn Peak, then bushwack down to the Cucamonga Peak trail, but Vicki had forgotten her hat, so we went back to Kelly Camp. When we got there, only three people were left, and they were packing up. It was a mass exodus, and we couldn’t have been happier. With a bit of luck, we’d have the camp to ourselves that night! 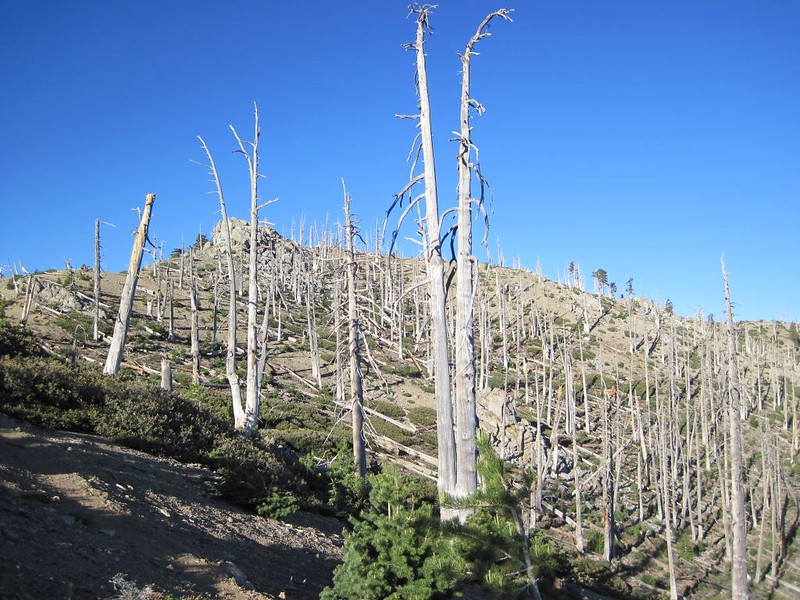 Dead trees on the way to Ontario Peak 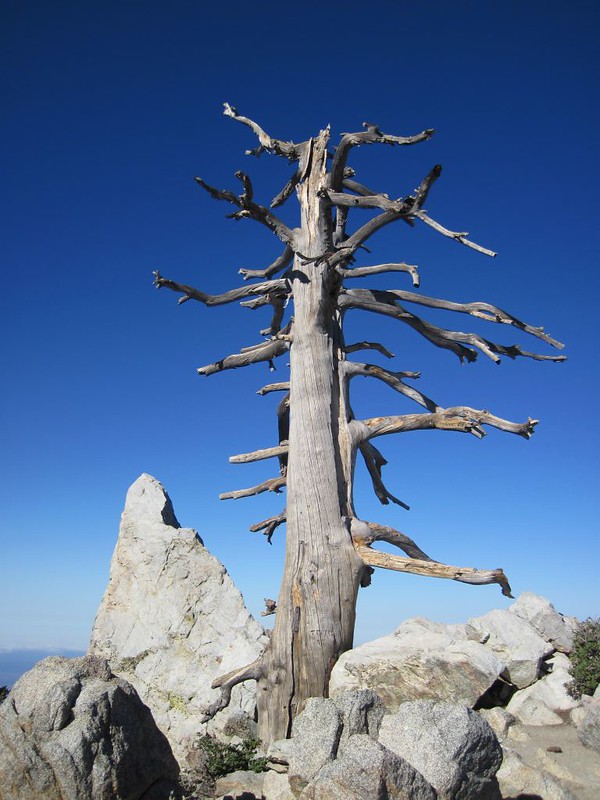 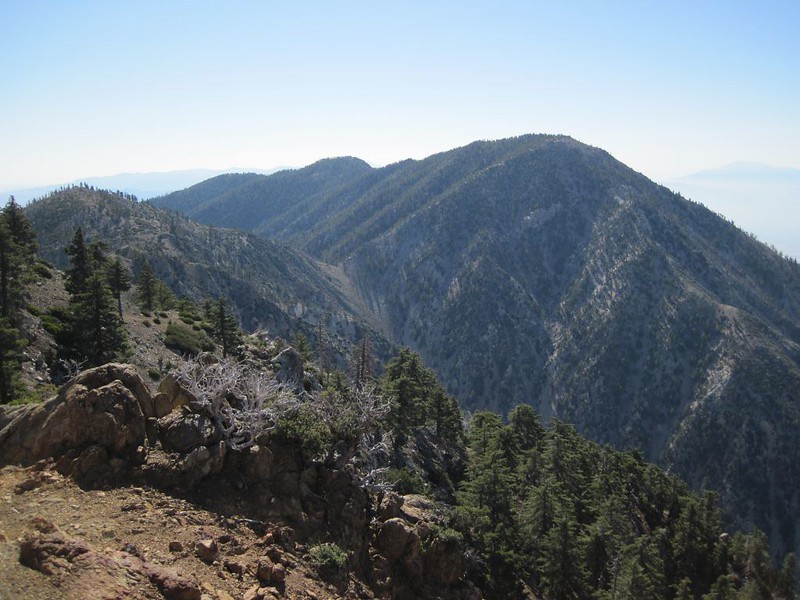 We got the hat and headed back to Icehouse Saddle. Once again, it was mobbed. But we blasted away down the trail to Cucamonga Peak. Ahhh. Instant isolation. We checked out the abandoned gold mine and had lunch on the saddle between Bighorn and Cucamonga. It was very breezy there, so I put on my windbreaker. 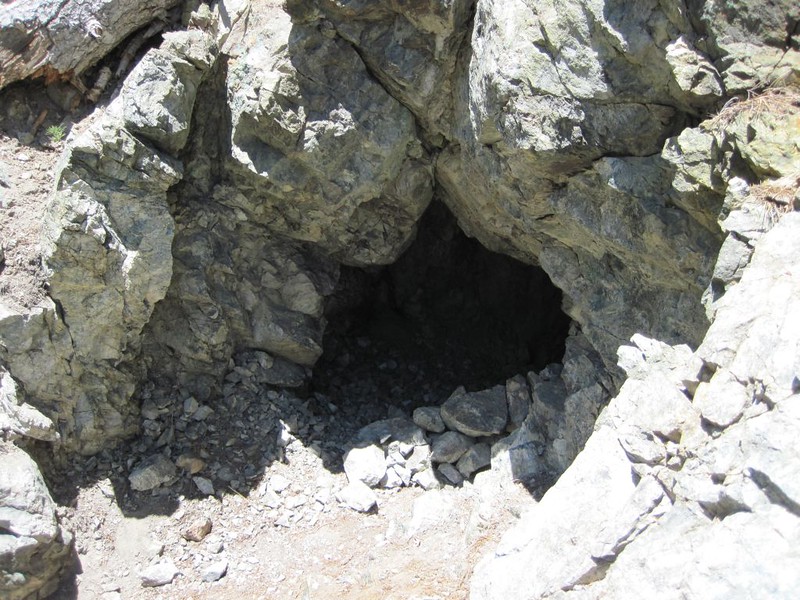 Old gold mine (?) on the Cucamonga Peak trail 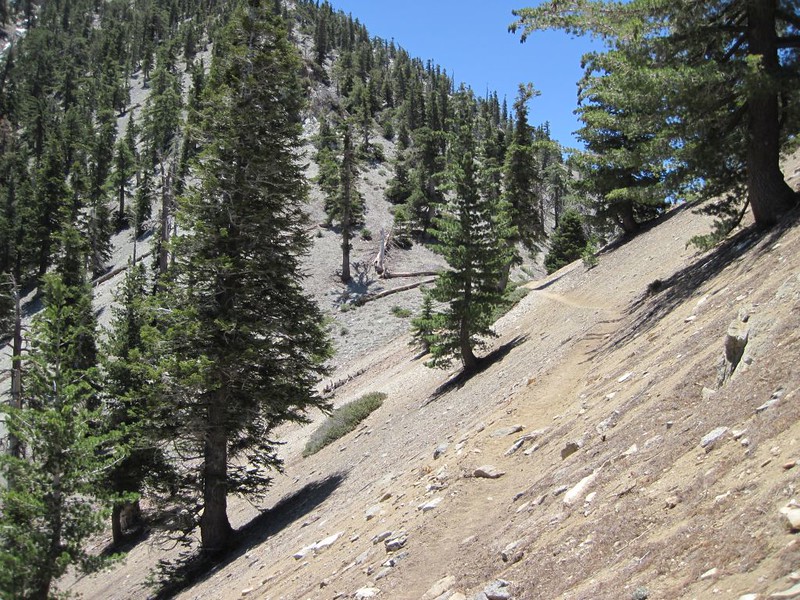 Nearing the saddle between Cucamonga Peak and Bighorn Peak

Then we started up the switchbacks to the peak. There were still a couple of patches of snow in the couloir, and another along the trail near the peak. Vicki lay down on that one to cool off, but not for long: It was slushy and wet and dirty.

Ontario Peak and Bighorn Peak panorama, with Mt Baldy behind them 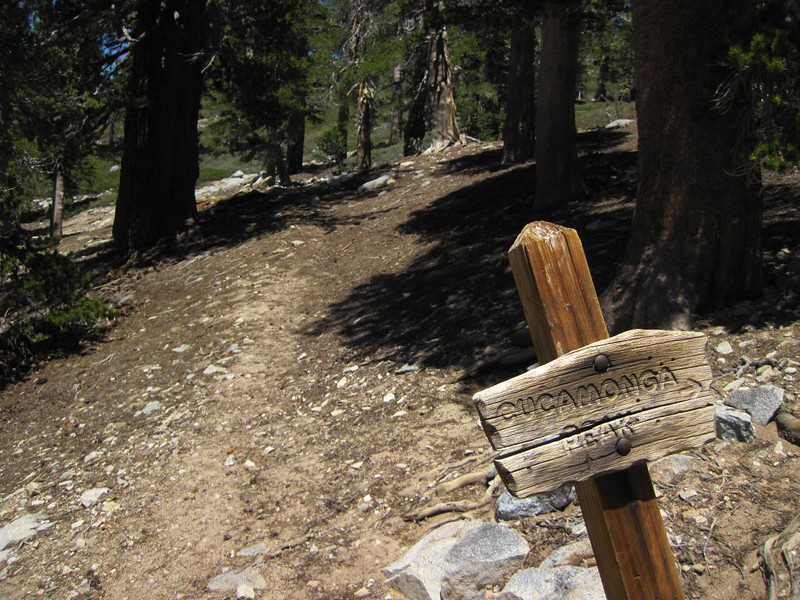 We saw San Gorgonio and San Jacinto off in the distance to the east, but it was a bit hazy. Within the next month we’d be hiking on both of them. This hike, as well as the other peaks, were all part of our plan to train for our ten-day Sierra Trek in August up in the Yosemite high country and Ansel Adams Wilderness. Going camping and hiking in order to “train” for going camping and hiking. What an excellent plan! We hung out on the peak for a while and had some snacks, then headed back. 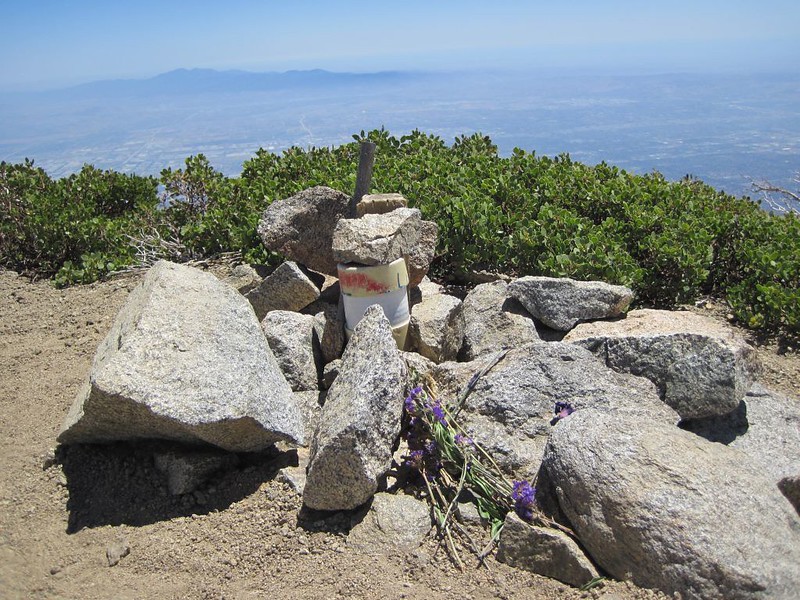 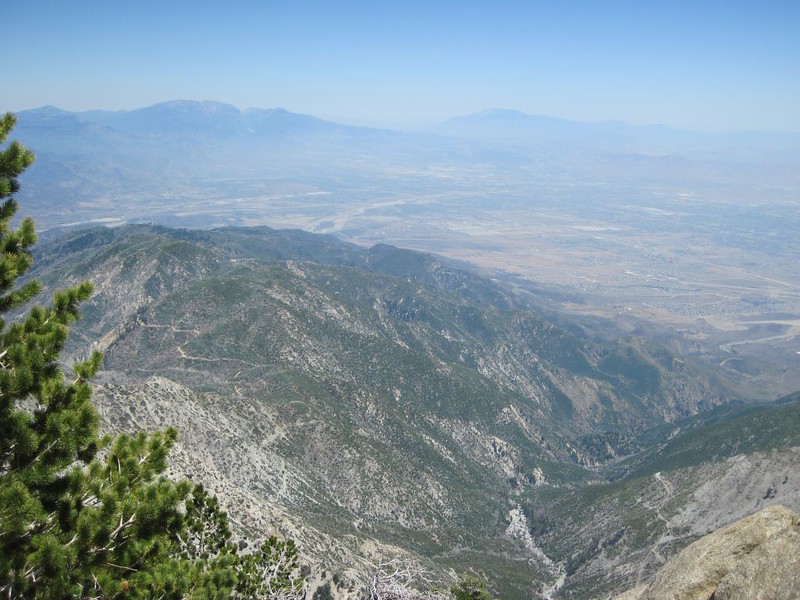 By the time we got to camp we were quite tired, and could feel it in our legs. It was only a bit over ten miles, so maybe it was the elevation gain. Or maybe it was the downhill, which I never really like. Anyway, we’d obviously have to keep training. Heh heh. Oh, yeah! 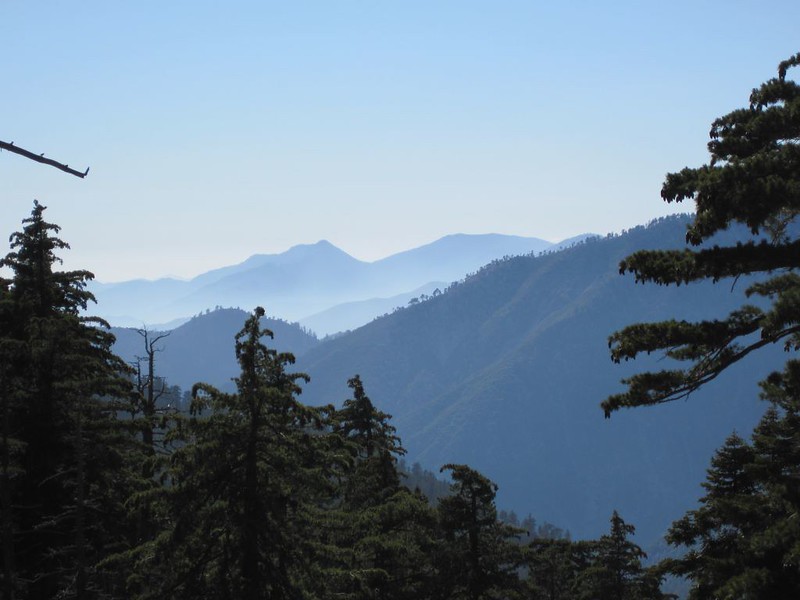 Looking down Icehouse Canyon into the afternoon haze 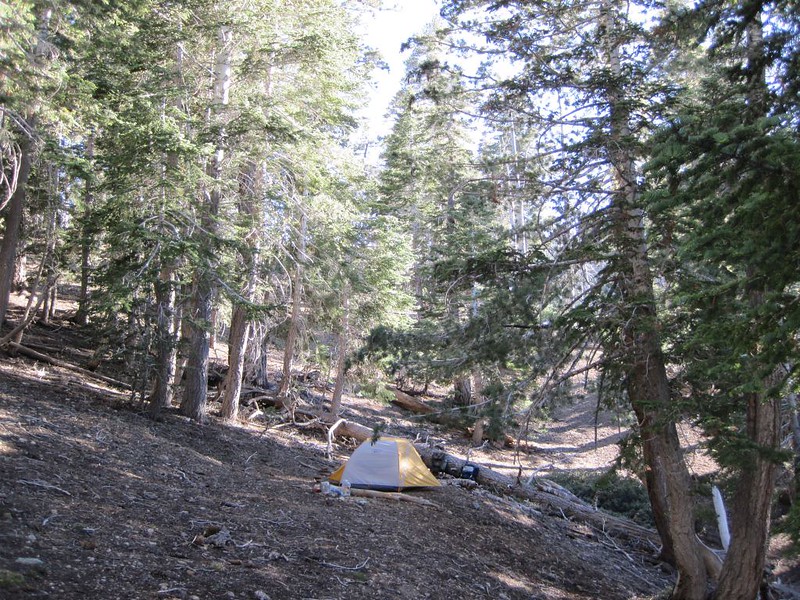 Our humble tent in Kelly Camp 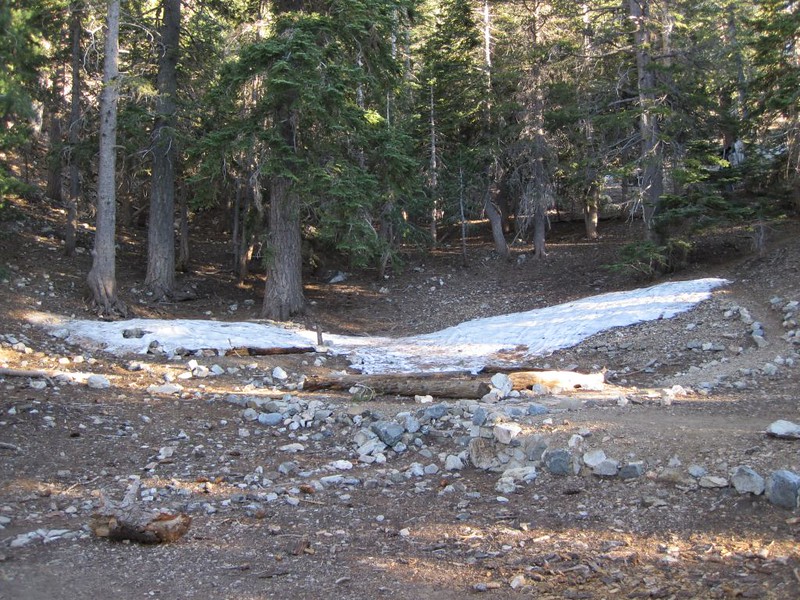 The snow patch in Kelly Camp

The next morning, Monday, we lazed around the camp. Vicki played with the spring and cleaned out the pool. She put a nice rock lining along the bottom where the filter-pump hose inlet could stay somewhat clean and mud-free. I told her that someone else would probably mess it all up next week, but she didn’t care. She was having fun. I stayed in the tent and read my book. It felt weird to not be packing up at the crack of dawn to hike all day. But it was extremely relaxing; I may even try this again! We finally finished packing up about eleven, and headed down the trail. 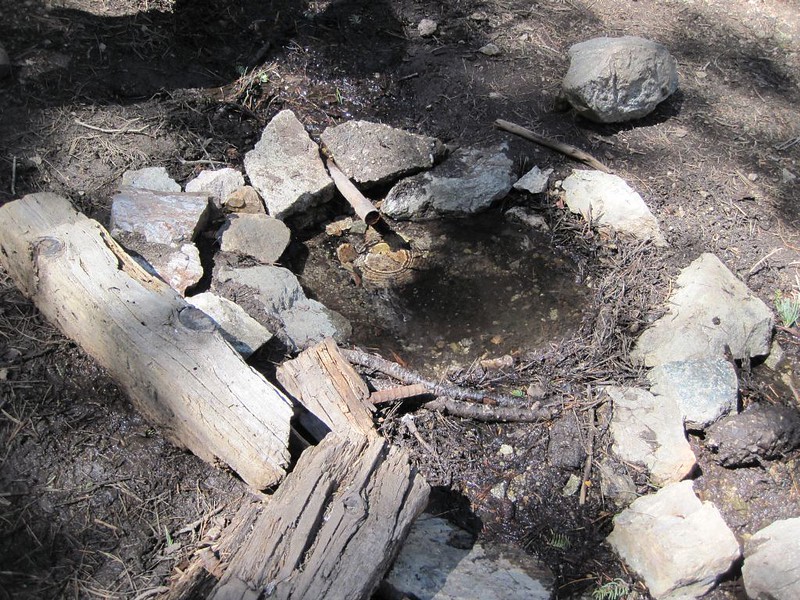 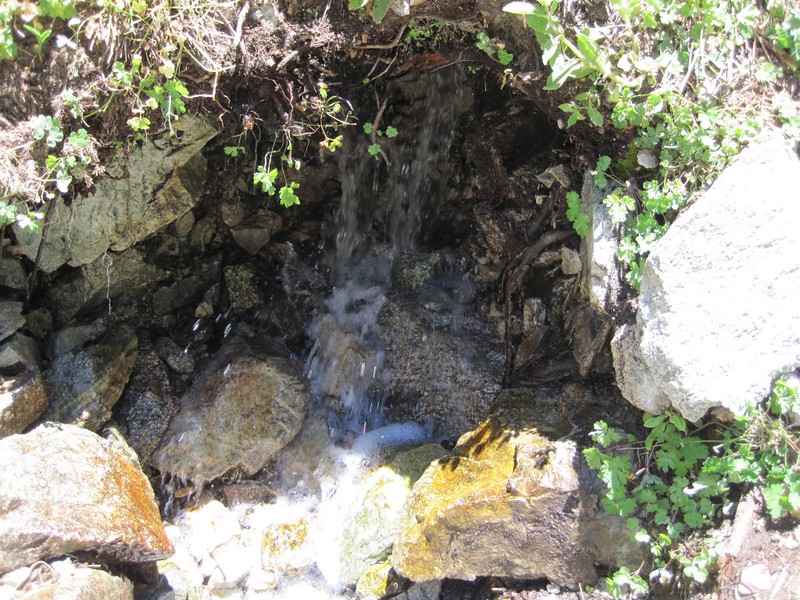 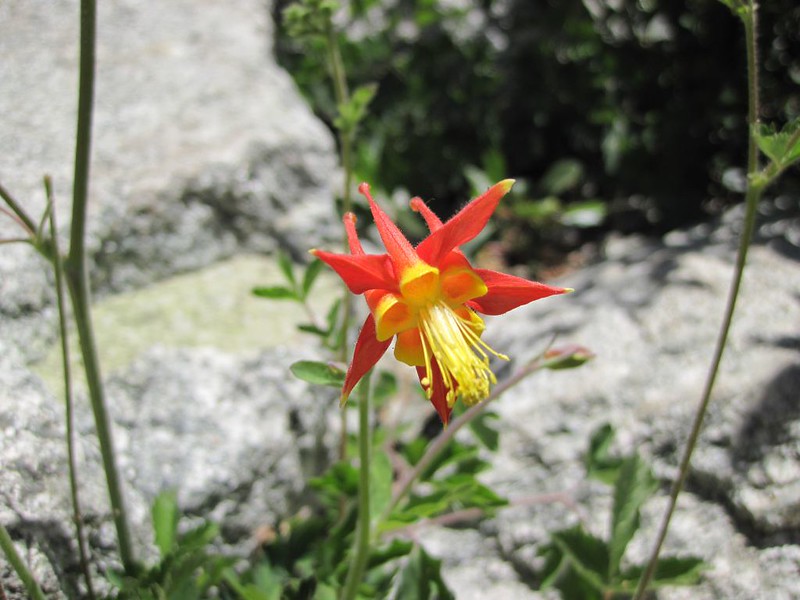 Lovely Columbine flower at the spring 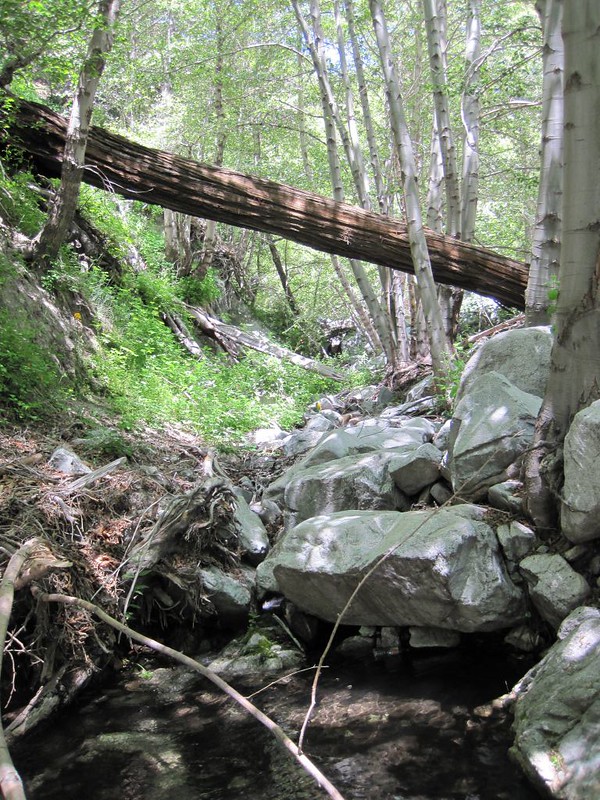 This time the trail was relatively deserted. We only met about a dozen people the whole way, and Icehouse Saddle was completely devoid of people. It was just as wonderful going down as coming up, and both of us were extremely glad that we’d experienced the beauty of Icehouse Canyon. We’ll be coming back there again, for sure!

Caltopo Map of the Hike

One thought on “Cucamonga Wilderness June 2010”