For our first summer hike this year we decided to visit the San Gabriel Mountains. Of course, there wasn’t much water flowing in the Southern California Wilderness after two years of drought, so our choices were limited. Unless we carried our own water. But that is also limiting, as water is heavy. Still, it seemed like an idea worth trying.

So we stared at some maps. Two years ago, we camped near Little Jimmy Spring and attempted to day-hike to Mount Baden-Powell. We got a late start and never made it the whole way to the summit, and that defeat was still bothering me. So we thought to rectify it this year. We considered camping at Little Jimmy yet again, as it always has water, but what we really wanted was peace and quiet and solitude, and Little Jimmy doesn’t have those qualities in abundance, at least not on a summer weekend.

So I stared at the map, and noticed that there was a trail from Dawson Saddle to the PCT. Maybe we could camp there. It’s much closer to Baden-Powell. True, we’d have to carry our own water, but maybe it would be worth it. Looking on Google Earth, it appeared that the ridge just above the trail about a mile from the saddle had a broad flat area on top. Zooming in, it looked like a certain-sure camping spot. Carrying two gallons of water is never fun, but only carrying them a mile seemed eminently do-able. So that’s what we did.

We arrived just after dawn at Dawson Saddle, and got ready to hike. 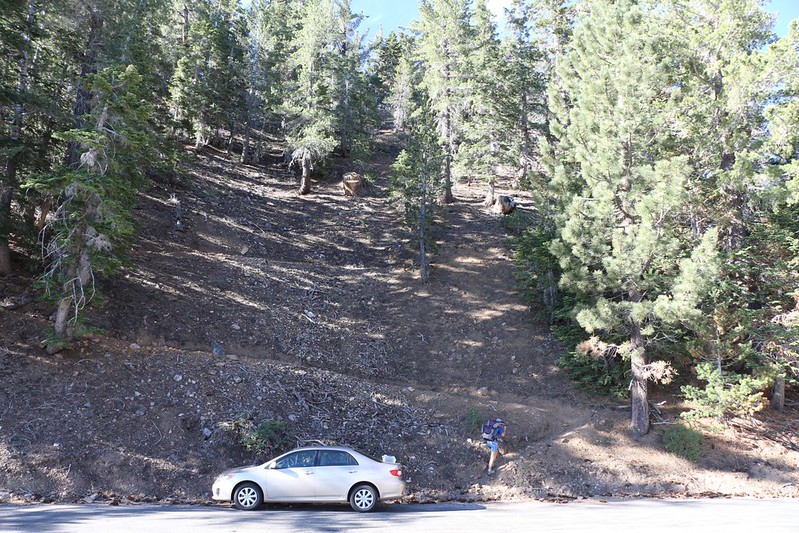 The trail switchbacks steeply up the ridge from Dawson Saddle.

There were a few sketchy sections where the trail was very narrow. We didn’t know (since we’d never been here before) that the “true” trail begins around the corner to the east. Not sketchy or steep at all, but much longer. Live and learn. 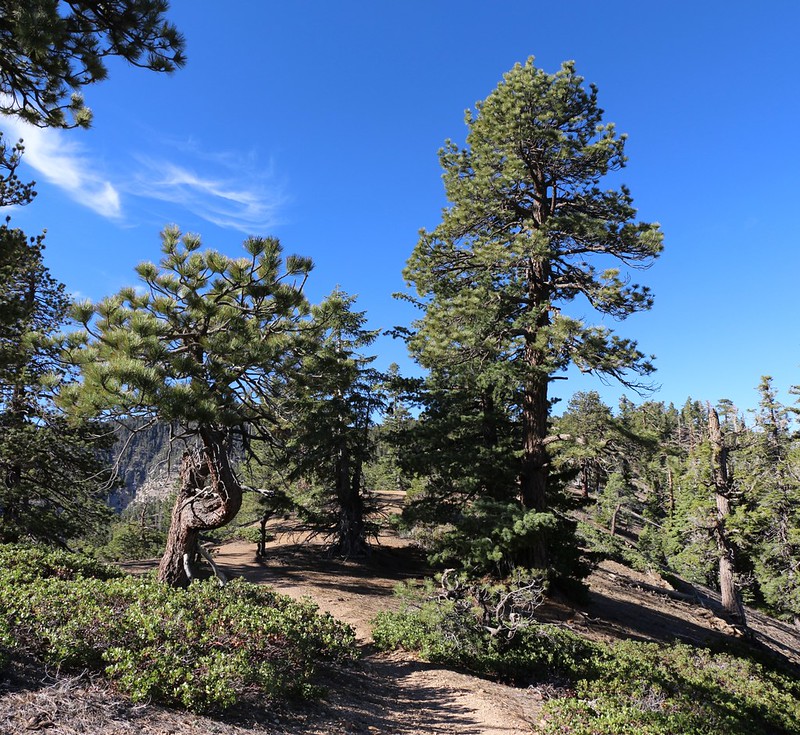 Easy hiking on the ridgetop on the Dawson Saddle Trail, with views both east and west. Nice! 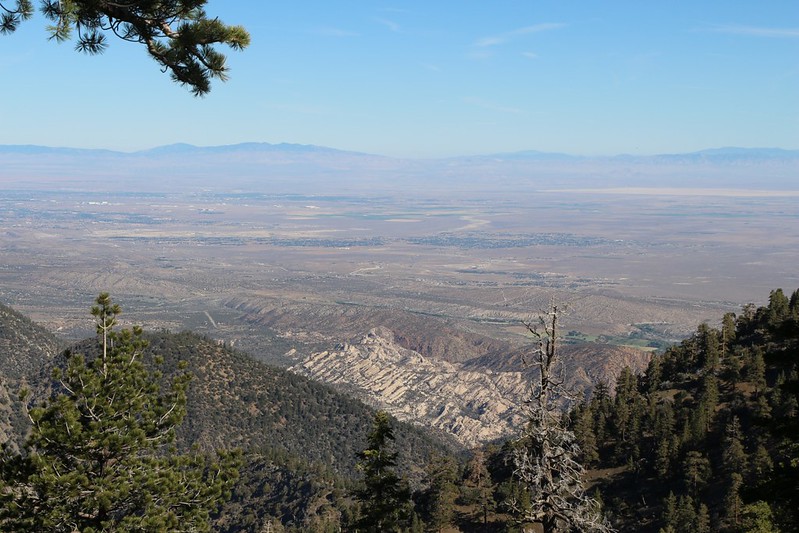 Looking northwest over the Mojave Desert, with Sandrocks below us.

With a major heatwave going on, we didn’t even want to think about the temperatures down there. It was still early morning, yet it was already in the mid-seventies up here, and the sun was potent. We hiked uphill using the “shade-patch leap-frog” method, pausing to breathe only in the shade while turning to face any breezes that might be available. 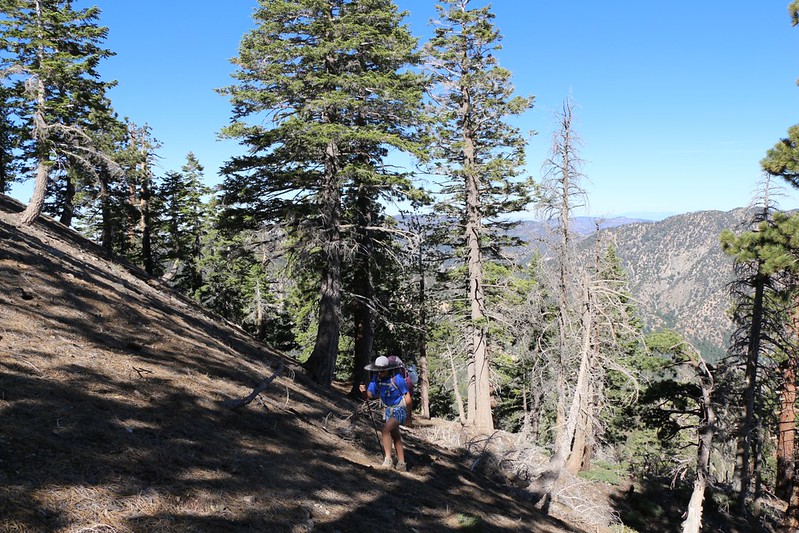 Steep climbing up the ridge after leaving the trail.

This was all a part of our evil plan. The trail side-hilled along the left side of the ridge, so all of the other hikers would never suspect that we were camping up above them on the ridge-top. Heh heh heh… 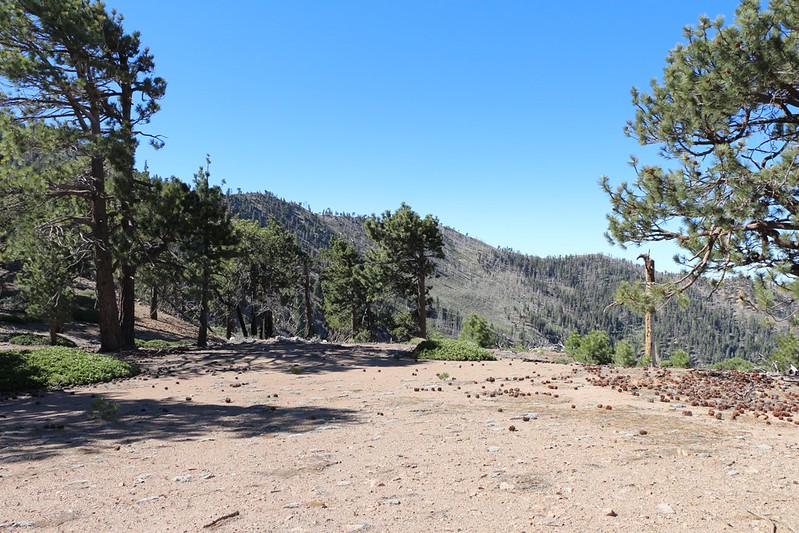 Hundreds of people could camp here above the Dawson Saddle Trail.

I don’t want to bore you with all the shots I took of flat spaces perfect for tents.  You could camp a small army up here. 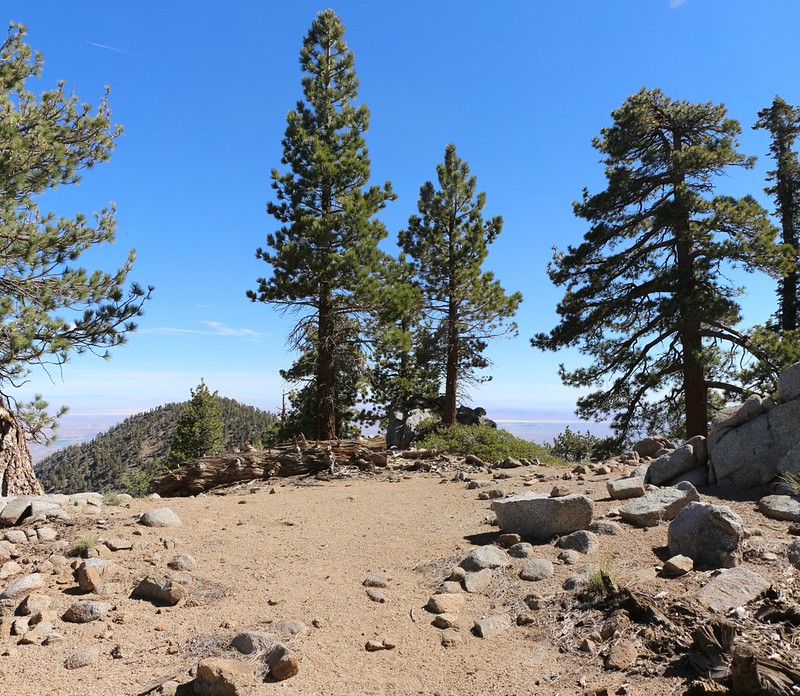 This is where we decided to set up camp, with nice views both east and west. Mount Lewis is visible to the north. 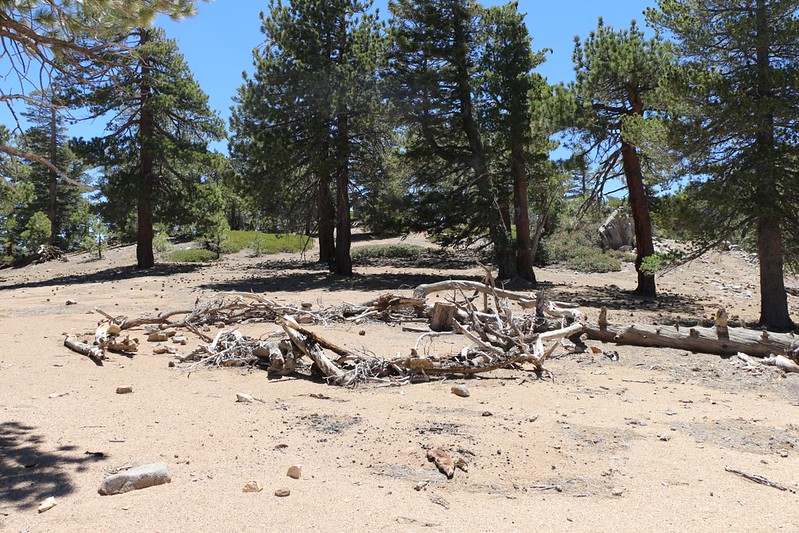 Sorry to bore you, but here’s another big camping area.

After setting up camp, we day-hiked along the ridgetop to meet up with the trail further south. We were planning to bag Baden-Powell the next morning, but for now we wanted a relaxing hike, so we set out for Mount Hawkins.

View west to Mount Islip from the Dawson Saddle Trail.

Panorama from the PCT near Mount Throop looking south to Mount Baldy and other peaks. 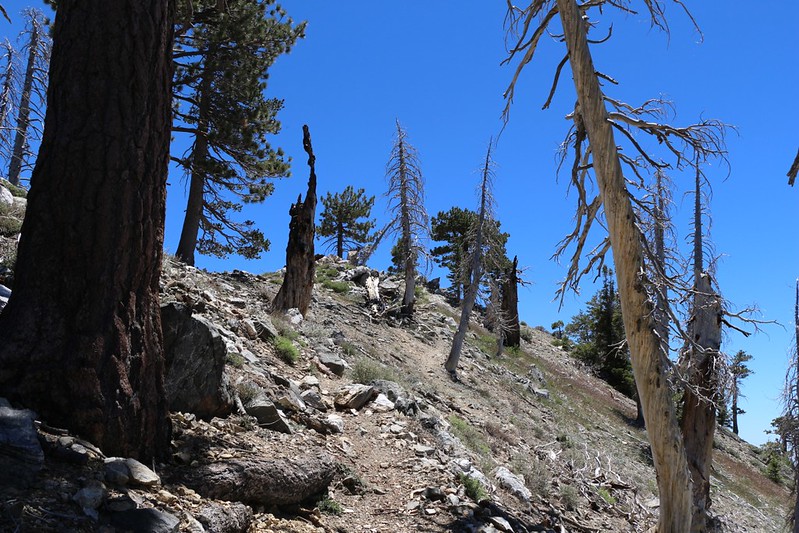 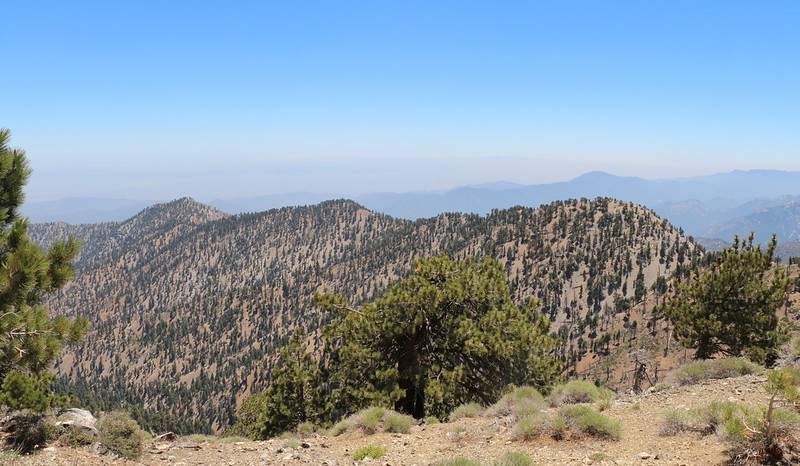 We took a nice break on the summit of Hawkins. Vicki took a nap in the shade, and I read my book for a half hour or so. We ate lunch and digested it for awhile. It was nice to be out in the wilderness with great views all around.

Hiking back to camp on the PCT west of Throop Peak, with Mount Baden-Powell and Mount Baldy. 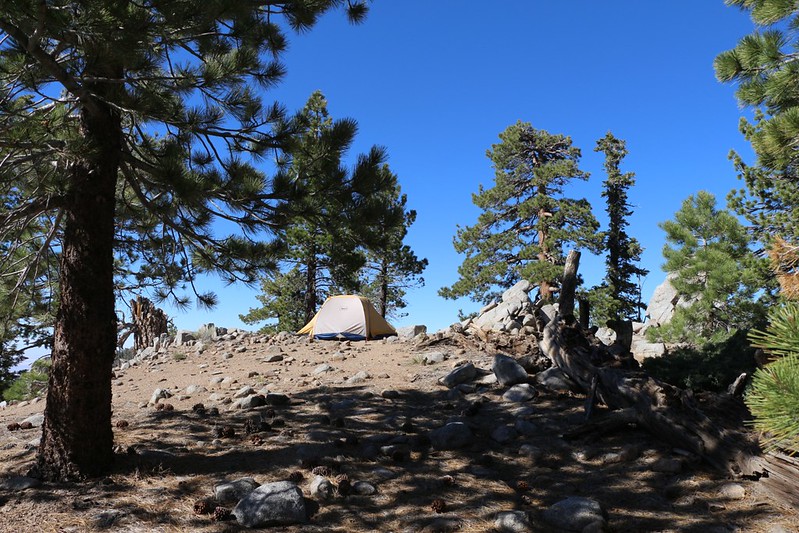 Our tent on the ridge.

We chose a spot on a narrower section where there were better views. And better breezes. Too bad there wasn’t much shade on the tent. So we hung out on some shady granite boulders instead.

After dinner the temps cooled off and it developed into a nice night. We could see the generalized glow of the lights of LA to the southwest beyond Windy Gap, and the sparse sparkling lights of the desert below us on either side of the ridge. Beautiful! 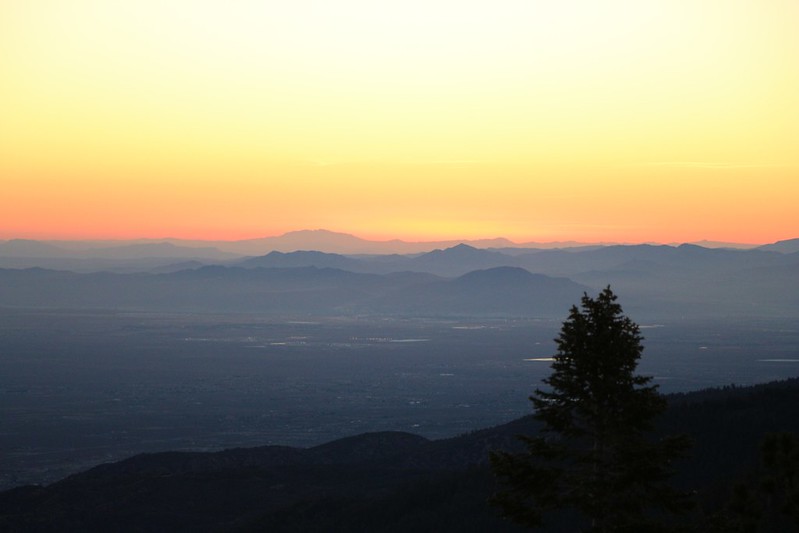 Sunrise over Victorville from our campsite.

We got up early, ate some oatmeal, and started hiking while it was still cool. 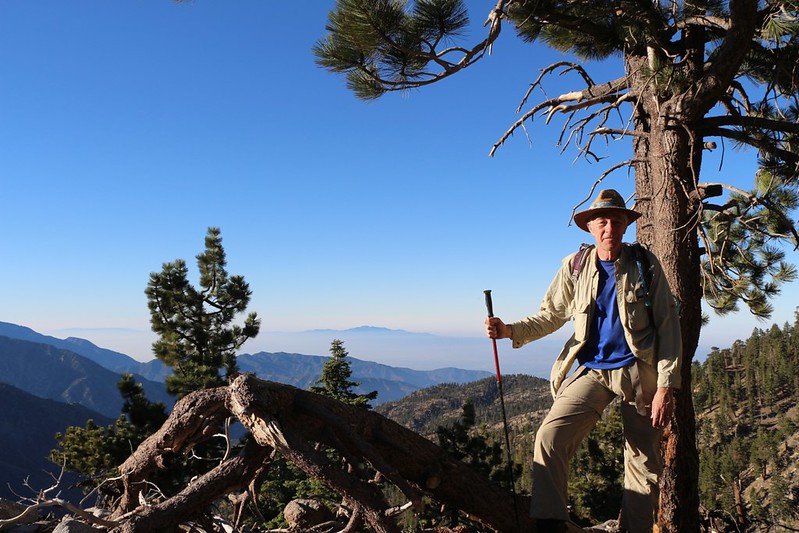 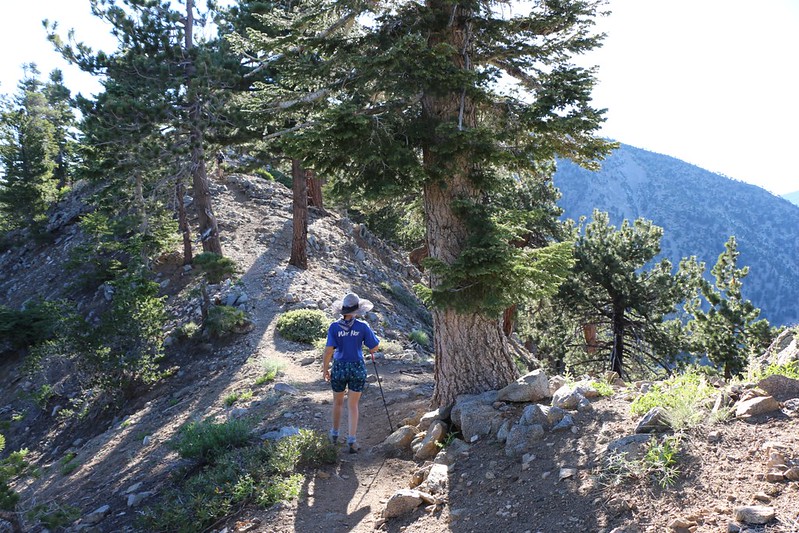 Hiking the PCT on the narrow ridge between Throop Peak and Mount Burnham.

This was possibly the most scenic section of the trail. I imagined water flowing into the Mojave Basin on our left and the Pacific Ocean on our right. A watershed daydream on the true Pacific Crest. 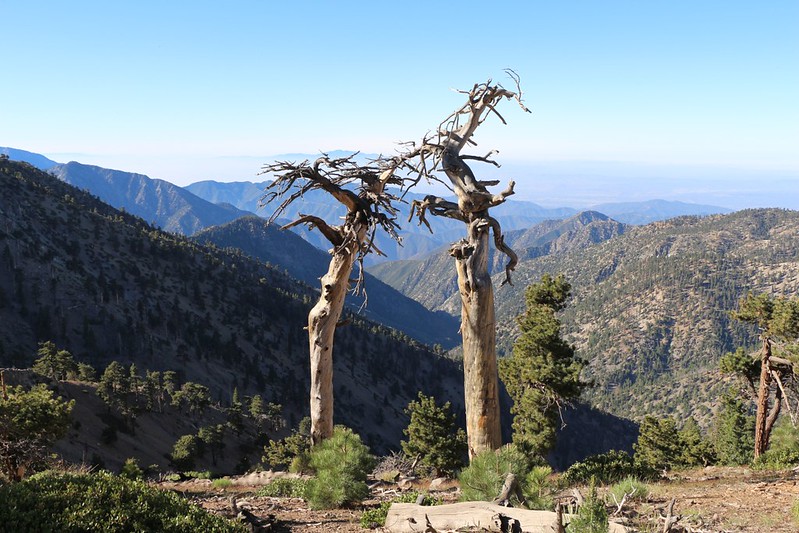 Two dead trees on the PCT between Mount Burnham and Mount Baden-Powell. They reminded me of an old married couple. 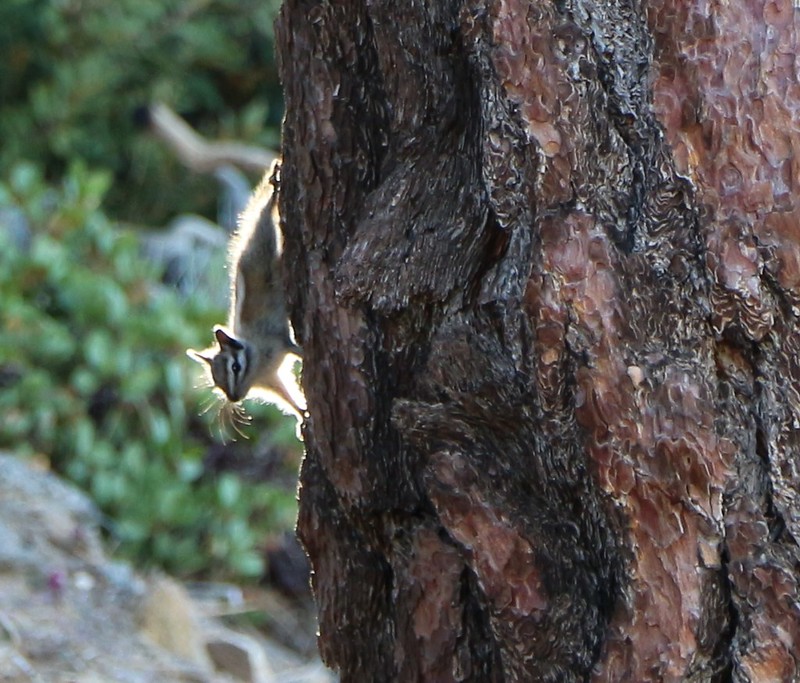 Chipmunk on a Jeffrey Pine in the morning sunlight.

Wide panorama southeast toward Mount Baldy from the northeast ridge of Mount Baden-Powell. 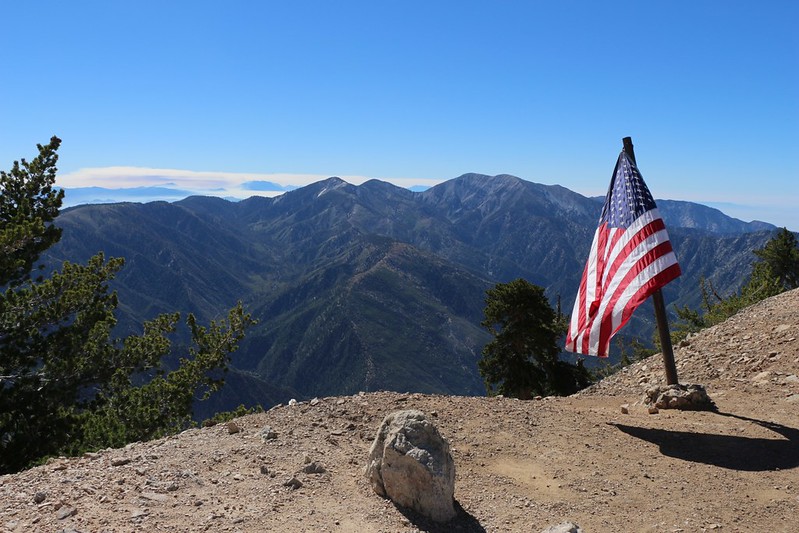 American Flag on the summit of Mount Baden-Powell, looking southeast toward Mount Baldy.

Panorama view west from the summit of Mount Baden-Powell

Seeing it burn was killing me, as there was nothing I could do to stop it. And so much for the permits we had to camp over there three weeks later in July. The San Gorgonio Wilderness was closed for the foreseeable future. Game over, man. 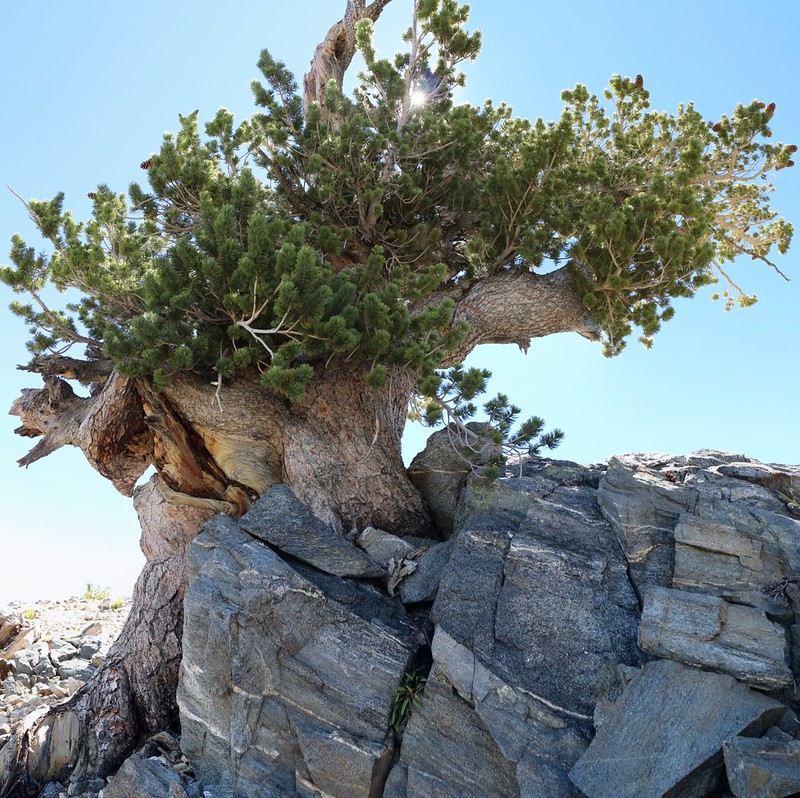 Huge old Lodgepole Pine on the ridgeline west of Mount Baden-Powell on the PCT. It wouldn’t surprise me if this one was as old as the Wally Waldron Tree back on Baden-Powell. 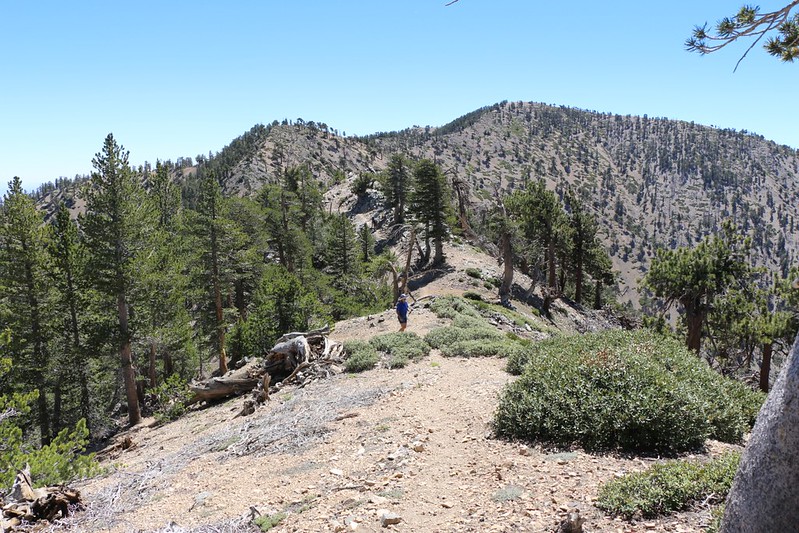 Looking back toward Mount Baden-Powell from the east ridge of Mount Burnham. 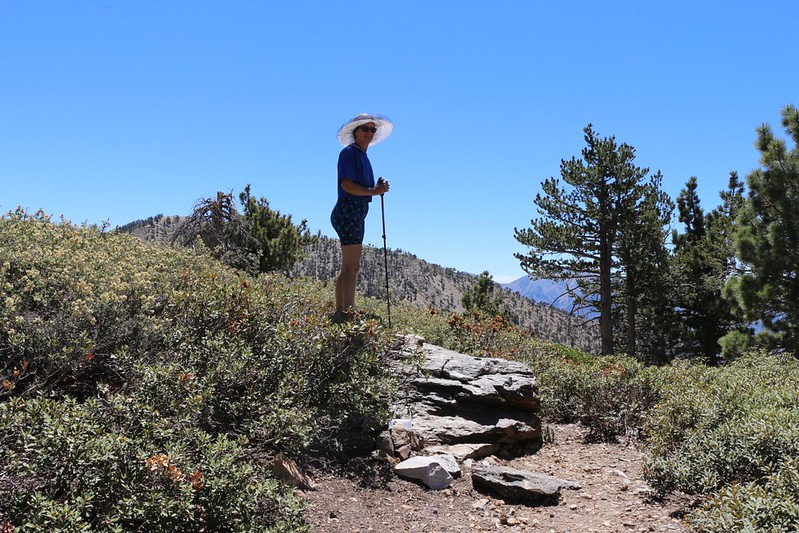 Vicki on the “summit block” of Mount Burnham where the peak register can be found. 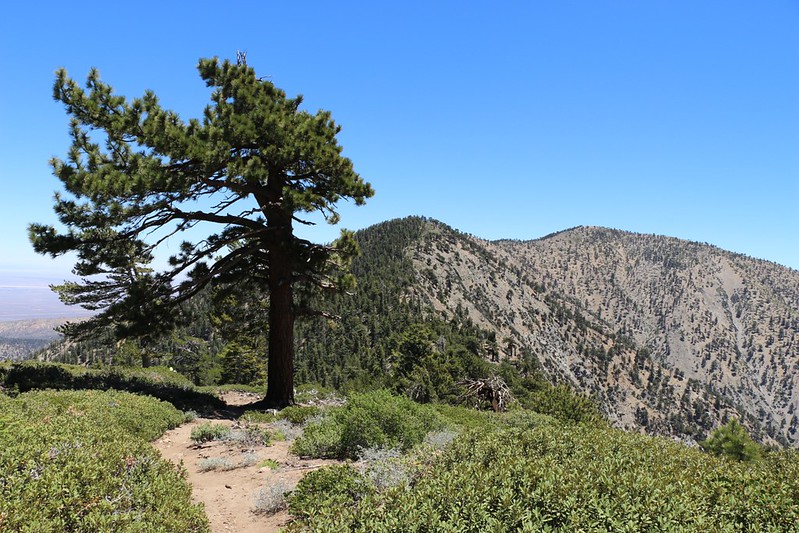 Looking back east toward Mount Burnham and Mount Baden-Powell from the PCT near Mount Throop.

Then we hiked back to camp, arriving just after noon. It was roasting in the sun but we didn’t have much choice in the matter. We grabbed our belongings from the tent and dropped them in patches of shade along with our big backpacks. Then we rolled up the tent as fast as possible (the hot nylon was burning my hands!) and ran for the shade ourselves. At that point we were able to relax and pack our packs in comfort. 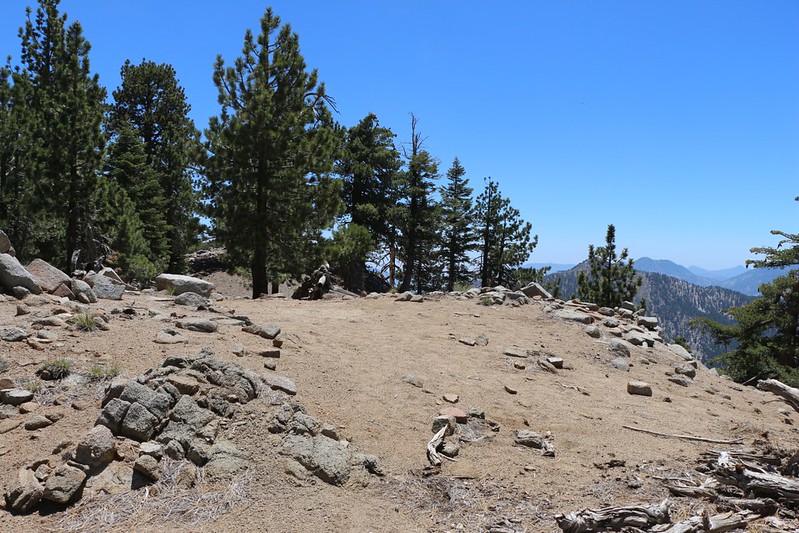 We said good-bye to our wonderful campsite and hiked on out. This time we took the proper trail down to the other, bigger parking area at the saddle. 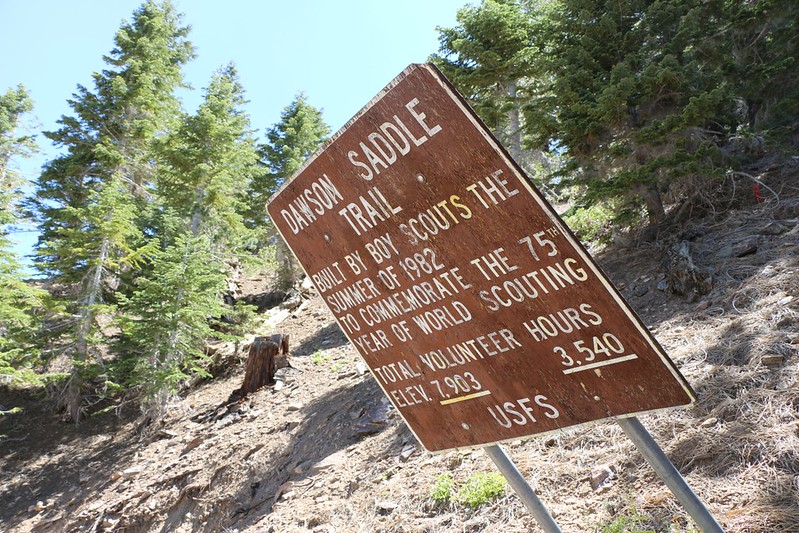 After reading the sign and thinking about it since then, I realized that all those Boy Scouts that built the trail must have camped up on that ridge back in 1982 during the construction. No place else made sense. If anyone reading this can corroborate my theory I’d appreciate hearing about it.

Anyway, that was the Trip Report. It was a fun hike, and it was nice to find a new (old) spot to camp where so many excellent peaks could be reached with relative ease.

Caltopo Map and GPS Track of our hike