This is a satirical trip report, loosely modeled after the awesome exploits of Burchey, that amazing mountaineer, a true master of trip reportage, and one of my personal heroes. The more adventures he undertakes, and the more trip reports he publishes, the happier I am. Really! (OK, Burchey, you can stop blushing now!) Some examples: TR1 and TR2. In this report I do the opposite of Burchey, who makes extreme mountaineering adventures seem like merely a tough day’s work; herein I take an easy hike and make it, well, let’s just call it semi-fictional…

NEVER MADE IT TO THE SUMMIT (elevation 2894 feet!)

We drove haltingly through the toll booth at Lake Poway, morosely looking on as the guards looted my wallet for my last five bucks. I wasn’t sure how we’d ever get home, flat broke, but it was too late now. We drove on in, found a spot, and donned our day-packs, ready to hike. But it was worse than we expected, as conditions were severe that morning. The fog was thick. We hiked around the lake, barely seeing the shore below us, and then we headed up the mountain in near-white-out conditions. 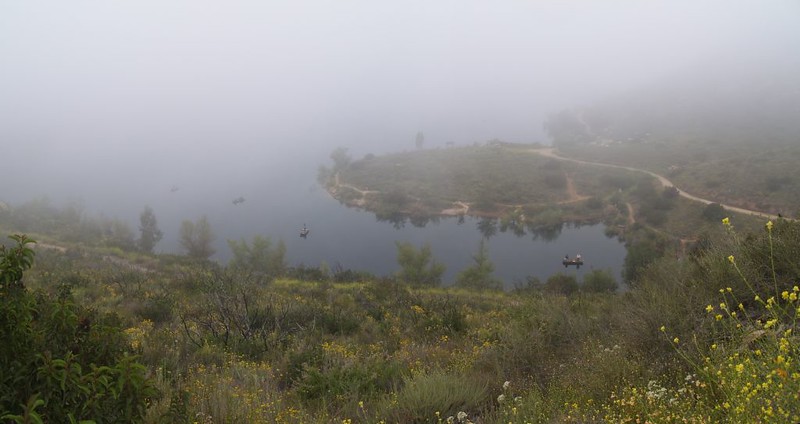 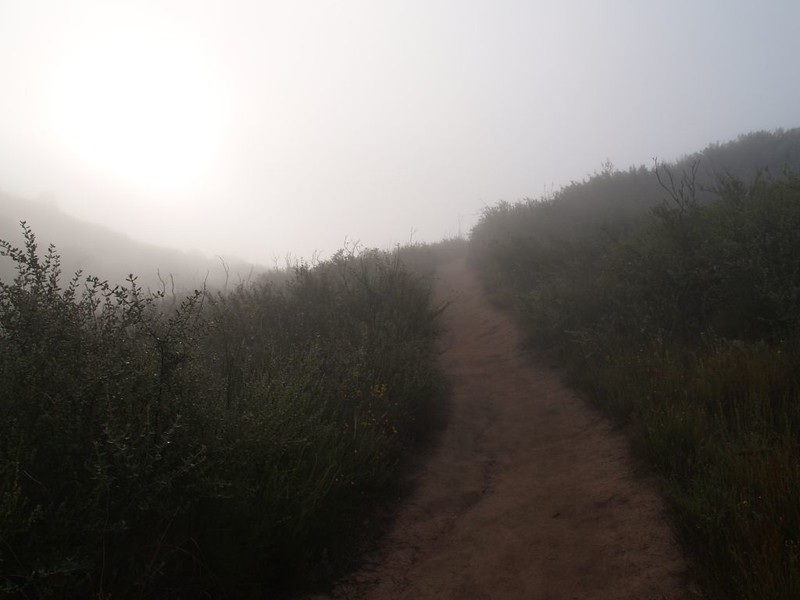 I had my GPS with me, but it didn’t do much good as there were seemingly hundreds of confusing use-trails. This place was too popular (on a sunny day those guards would be getting rich, but this morning, in this weather, the trails were deserted). We stumbled on anyway, following the “Rule of UP”, as we made our way into the clouds. Mist drifted in our faces; we were clammy and sweaty under our rain gear.

Finally we broke through into sunshine! The sight of nearby peaks sticking up through the clouds helped us regain our bearings, and we soldiered on up the now-dusty trail. We tore off our rain gear to dry out, and stood shivering in the breeze. The wind was gusting to nearly ten miles per hour!

As we hiked, the sun rose higher, and so did the temperatures. Soon it felt like we were in an inferno, with temperatures soaring into the low seventies. The smell of the blooming lilac bushes reminded us of graveyards, while the many colorful spring flowers were reminiscent of funeral parlors. We felt very mortal, humbled by the looming might of the mountain towering above us.

We gained the ridge, and attained a grand view over the valley of Ramona, now covered in dense marine layer clouds. Isolated hilltops poked through into the heavens. Soon the summit came into view, a summit bristling with sharp antennae, with huge towers commanding microwave dishes beaming data in all directions. A formidable summit, indeed. We began wishing for the clouds to return, so that we could approach unobserved, but it was not to be. Heads bowed, we advanced under its pitiless gaze.

Granite Monoliths Ravaged By The Elements

Lesser Peaks to the South

We Were Bathed In RF Energy, Sapping Our Will

The trail to the summit is nearly four miles long, with an elevation gain of 1900 feet, nearly at the limit of human endurance. The lofty summit, at 2894 feet, strains the lungs of many. And we were no exception. Hearts pounding, pausing for breath every few steps, we reached a major milestone of our journey: Potato Chip Rock.

The Dreaded Potato Chip, Alone In The Sky

Just shy of the summit, Potato Chip Rock is famous all over the world. (Google it and you’ll see!) A perilous spear of paper-thin granite, it juts out into space, fearlessly challenging the cosmos for mastery. Puny humans dare to crawl out onto its lofty eminence, posing for lurid photos which they shamelessly post on the internet. “Sacrilege!” cry the practice’s many detractors, but the mountain remains serene and uncaring, as if to say “What do humans matter in the large scheme of things?”

We were amongst the first to pose that day. Soon, other supplicants arrived to worship the symbolic phallic rock. They, too, gave obeisance to the protruding stone, observed benevolently from above by the almighty towers. Many left sacrificial offerings in the form of cracker crumbs as they snacked nearby. Chipmunk acolytes collected them.

Dizzying View to the Lake Below

But enough resting, it was time for the summit push.

That was when my partner began exhibiting symptoms of Altitude Sickness. Conspiracy Theorists would claim that it was the microwave radiation from the towers that made her hurl her lunch, but there is really no need to look for more reasons beyond the simple fact that we were exposed to such an extreme altitude. Maybe if we hadn’t stayed at the rock so long we could have made the summit before the sickness had reached its full manifestation. But we’ll never know for sure.

And, as everyone knows, the only guaranteed cure for Altitude Sickness is to remove the offending altitude. She held on to me for support as we made our way down the steep, hot trail. By the time we descended from the ridgeline she was feeling better.

By this time the layer of clouds had all been burned off by the roasting sun, and we were finally able to see not only the trail, but the other side of the lake, as well. It was pretty, but the sun was brutal. We were longing for a return of the morning’s cool fog as our hot feet slapped up clouds of choking dust.

Nearing the End of Our Grueling Journey

Tired and footsore, we arrived at the car, and that was when we realized that we were still in trouble. As we approached the evil toll booth, we saw that there was a stop sign on the exit side as well! What more did they want from us? They’d already taken everything we had! This was when my partner came up with a brilliant plan. She noticed that anyone could walk out without being molested; it was only the cars that got stopped. So she got out of the car and walked over to the inbound side of the road, adjacent to the guard. I waited until she was in position, then got the car up to speed and turned off the engine, gliding silently toward the booth. Just before I reached it she called out “Hi!” to the guard and lifted her top up to her neck. The guard’s jaw dropped; he was totally stunned. Meanwhile, I coasted past unnoticed. Success! Teamwork. It’s a beautiful thing.

It’s too bad that we never made it to the top, as our GPS track attests. Oh well. Maybe next time, when we’re better acclimated.

As they love to tell you when you fail: The mountain will always be there.