Vicki and I day-hiked the El Cajon Mountain Trail in the El Capitan Preserve (a San Diego County Park) on December 21st 2013. Although the mountain is only 3675 feet in elevation, the 5.5 mile trail to get there (which we had to hike back) never stays flat for long, and the total elevation that we climbed that day was over 4000 feet! Whew! Needless to say, it was a long but satisfying day, and we were glad to take advantage of December’s cooler weather.

Unfortunately, they don’t open the gates to the parking area until 7am, and they lock them at 4:30pm, so early starts or late starts can be equally troublesome.  Or so we thought.  It turns out that you can park out on Wildcat Canyon Road, but we weren’t sure the first time we got there at 6am, so we put off our hike to a later weekend.  Having your car locked in a parking lot because you’re a slow hiker isn’t very much fun.  So don’t use the parking lot unless you’re very fit. 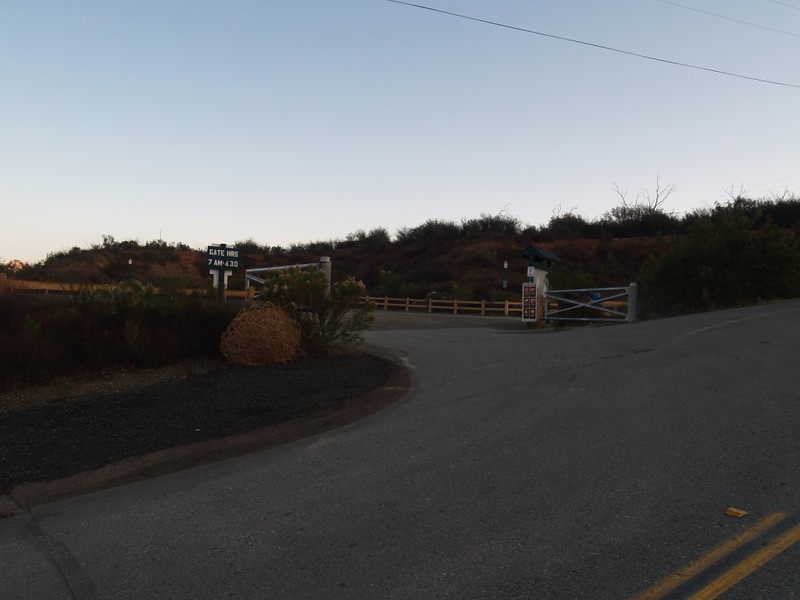 The trail doesn’t start at the parking area.  First you have to hike up Blue Sky Ranch Road through a neighborhood.  The trailhead proper is found up near the base of the first climb, where there is a bathroom and picnic area.  Then the switchbacks begin, and you gain some fine views to the west.  This section is cool in the morning, as it stays in shadow, but will be warm when you descend later on. 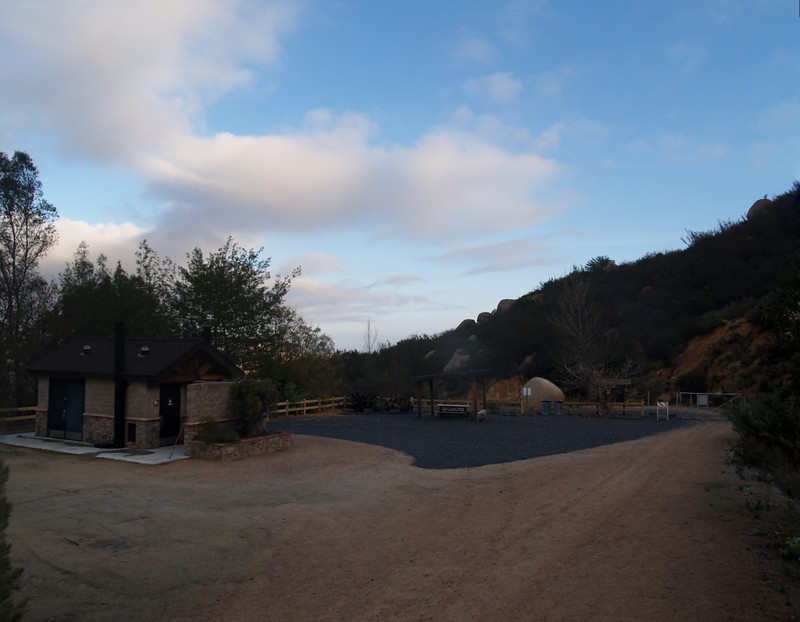 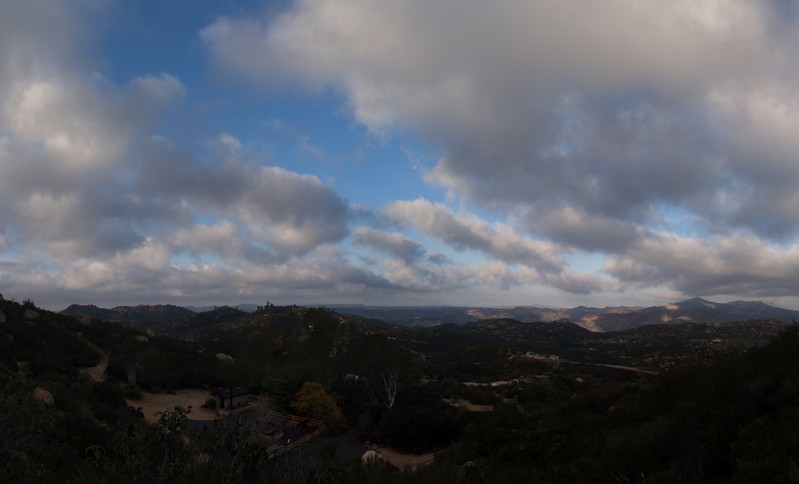 View west as we climb the first switchbacks

The views open up once you reach reach the top of those initial switchbacks.  You can see Barona Casino to the north, as well as your ultimate destination far off to the east.  Is it really that far away?  It sure looks it.  But, as always, take your hike one step at a time and you’ll reach your goal.  The elevation profile of the trail indicates that it is relatively flat for the next mile or more, but this is an illusion.  The trail rarely stays flat.  it goes up and down constantly, travelling over bumps and cuts.  You can tell that it used to be an old road, but it isn’t used any longer.  The weather has torn the old road up, leaving gullies and washed out sections.  It’s pretty much a very wide trail now. 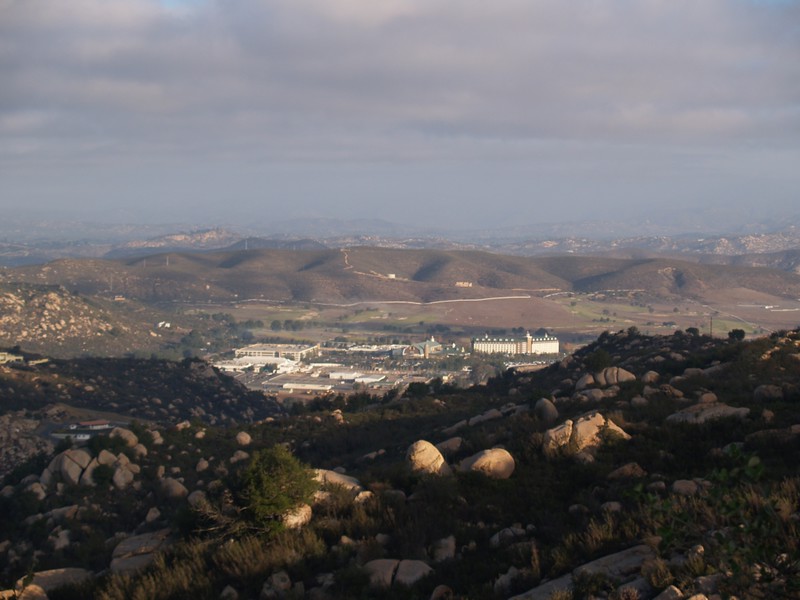 The Barona Casino could be seen to the north 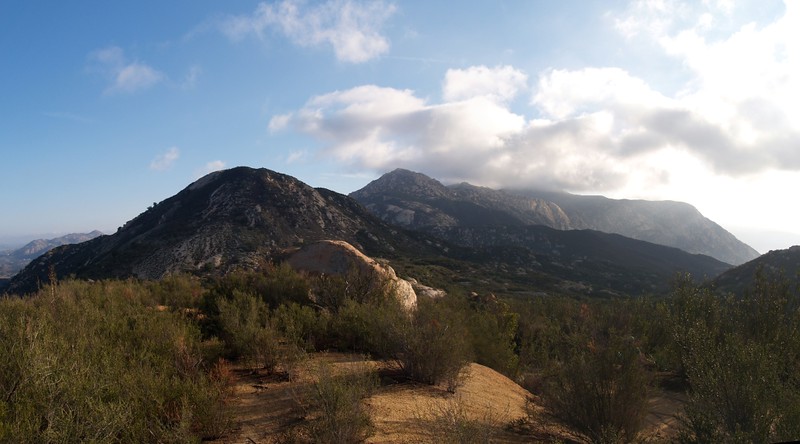 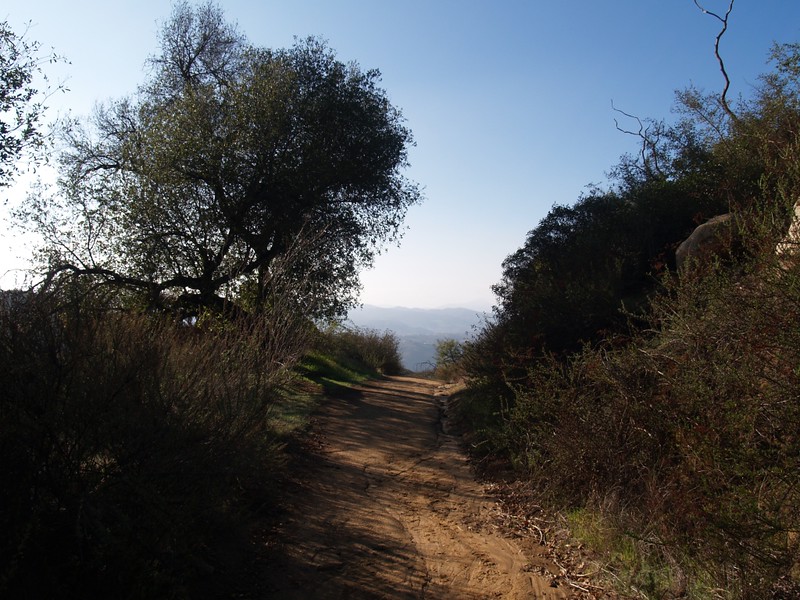 There is only one shady spot on the trail, under a nice oak tree, so take a break there, as the next section climbs quite steeply.  It goes uphill for a mile or so, climbing along the south side of Silverdome.  This is a hot section that can be quite deadly when hiked in the summer, so don’t do it.  Heed the warnings, as getting heatstroke and being airlifted out are not fun at all.  It’s hot enough in December, and is stenuous enough that you should still carry plenty of water. 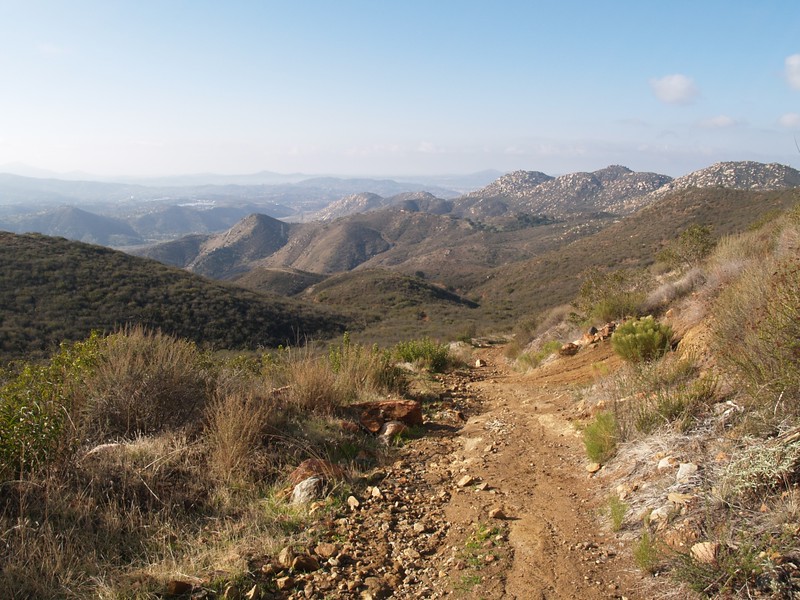 Steep climbing on this section of trail, but the views are excellent! 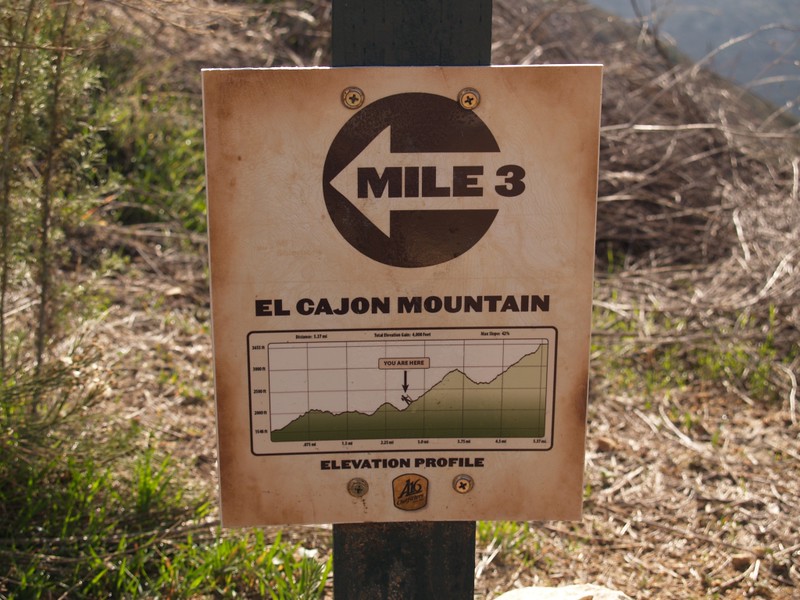 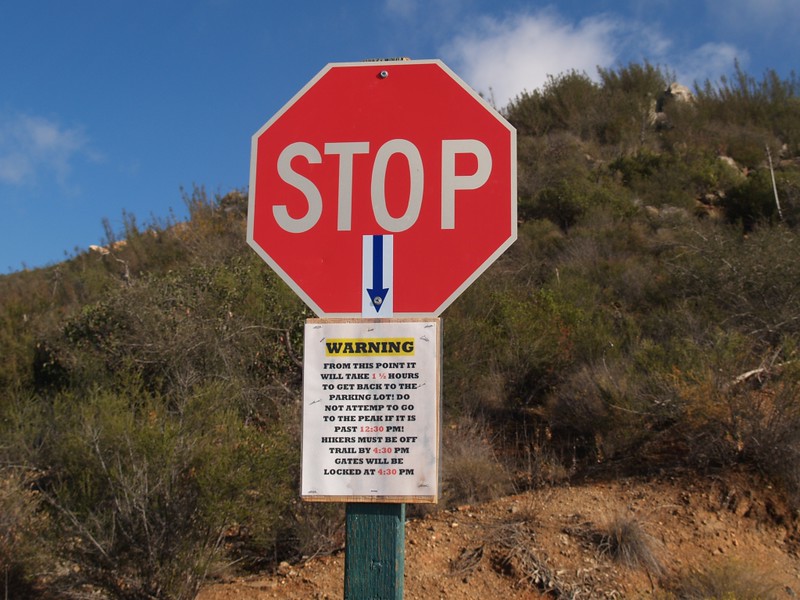 Warning Stop Sign on the El Cajon Mountain Trail, to make you aware of your “turn-around” time. 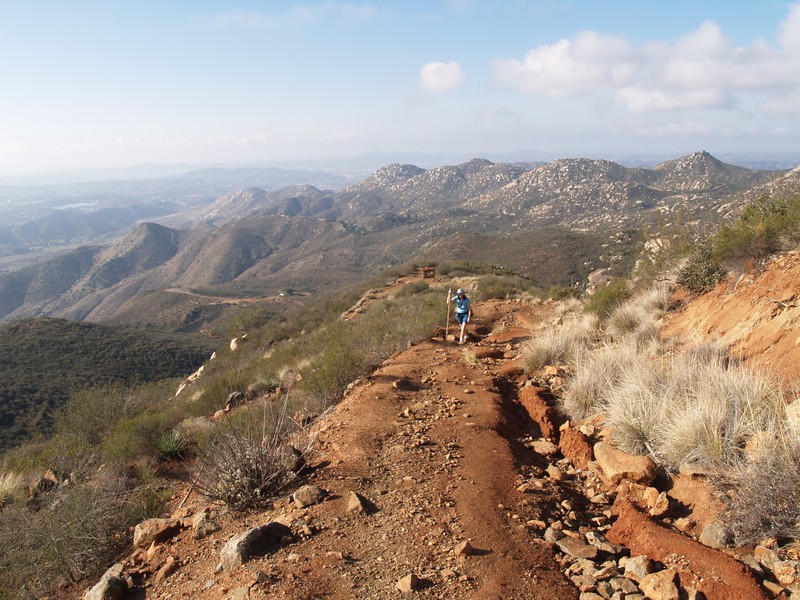 After the Silverdome Saddle area, the trail descends toward the north.  Hiking downhill after that last big climb sure feels great.  Too bad you have to gain it all back (and then some!) as you make the final long ascent to the trail junction up ahead.  This section has some major washouts that make you realize that no vehicles have been out here in a very long time. 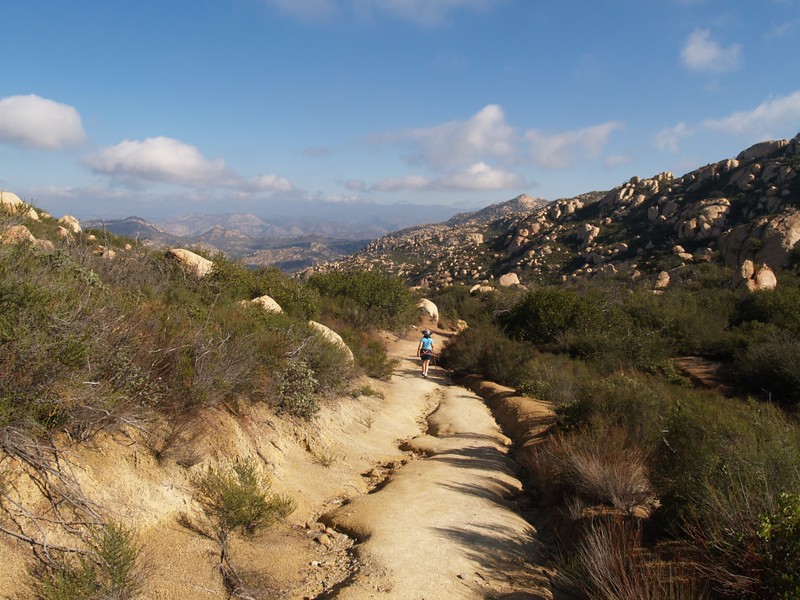 Descending the north side of Silverdome 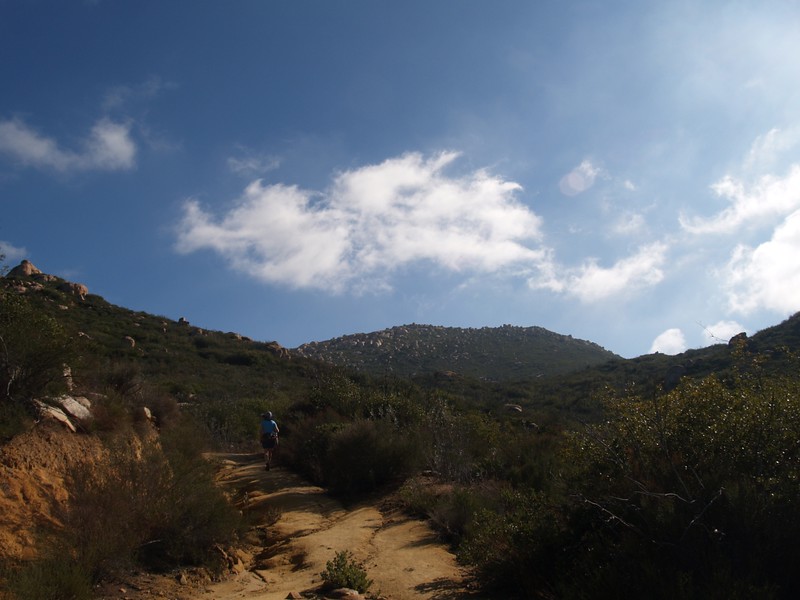 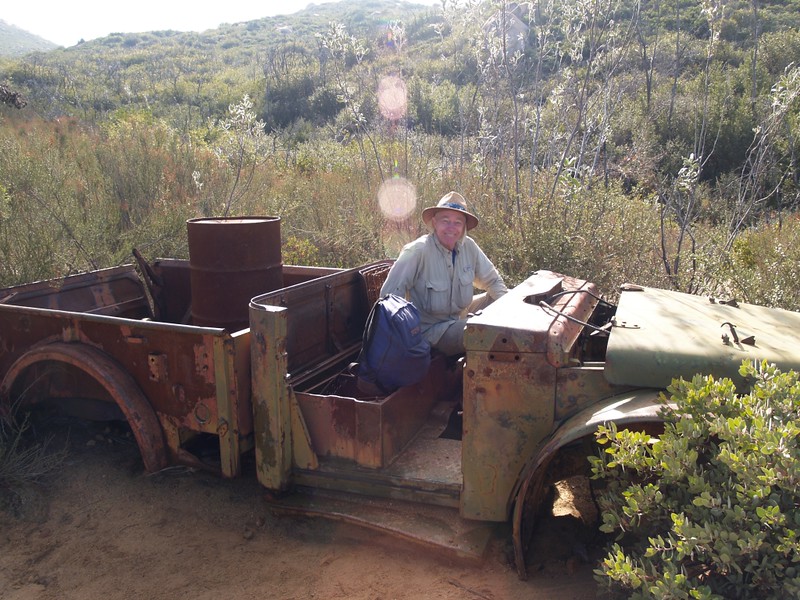 Eventually you will reach a trail junction.  There is a small trail off to the east that leads to El Cajon Mountain.  This is the one you want.  There is also an old road to the south which leads to the “summit” of El Capitan, a tall rocky eminence that looks down upon the city of El Cajon.  Many rock climbers come here, but they usually approach from below.  And let’s face it, it’s nowhere near as awe-inspiring as the real one up north in Yosemite.  But we didn’t plan to hike over there, as we had neither the time nor the energy; we’d reserve that hike for another day.  So we turned east and made the final climb up to the boulder-strewn summit of El Cajon Mountain. 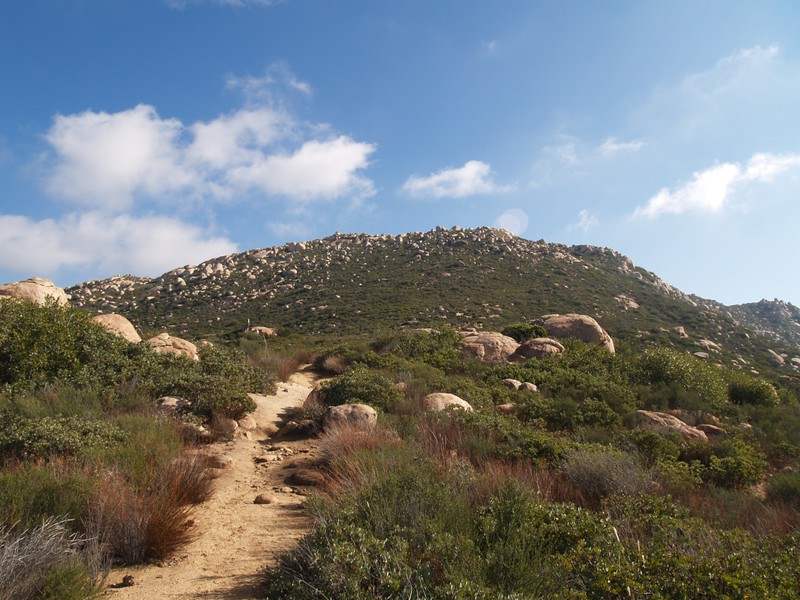 The final trail and ascent of El Cajon Mountain 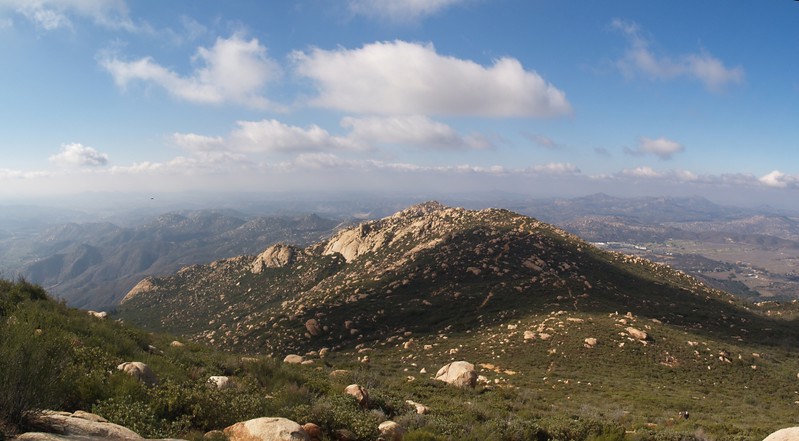 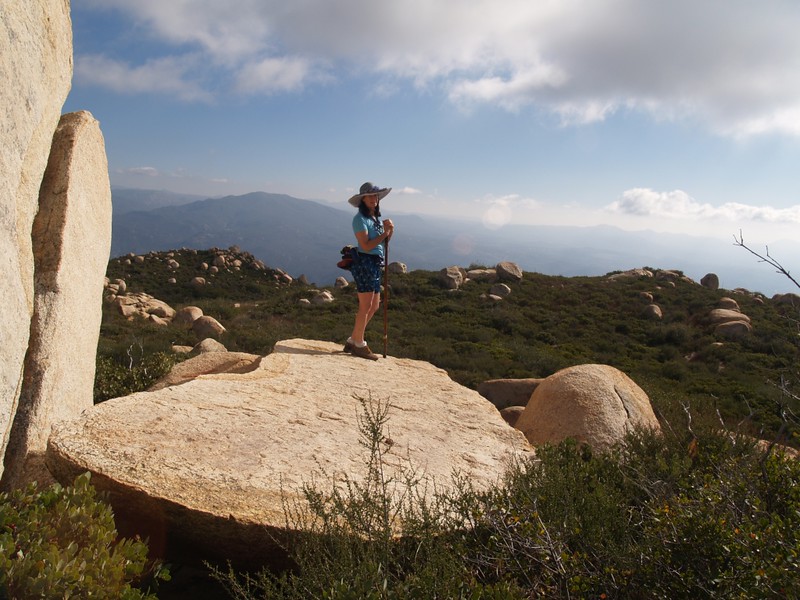 Split boulders near the summit of El Cajon Mountain 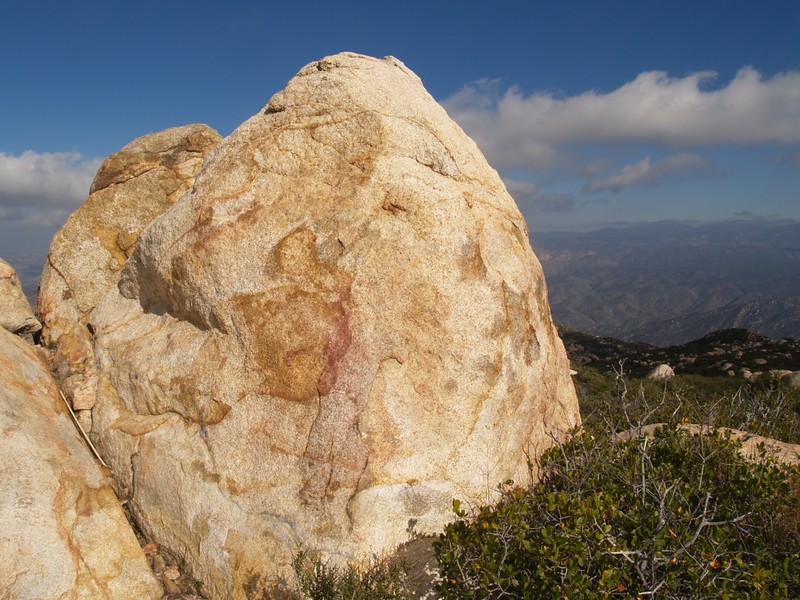 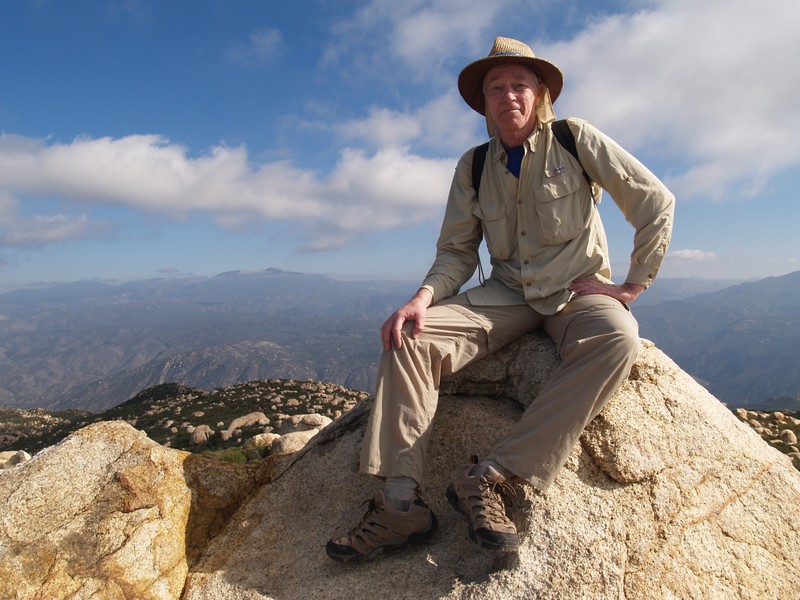 Me sitting on the comfy summit block of El Cajon Mountain 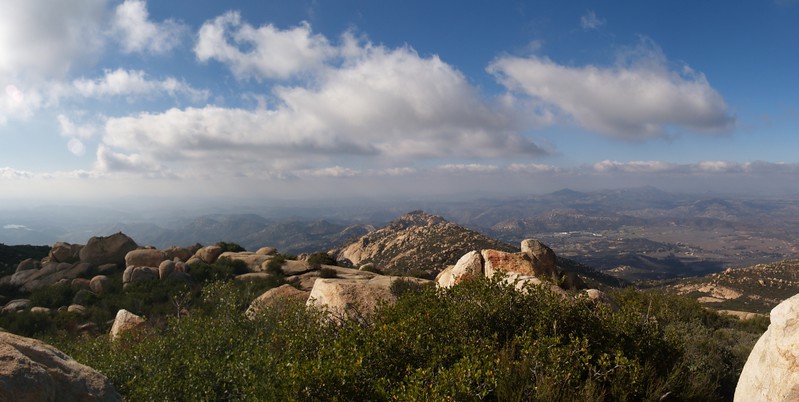 Panorama view west from the summit 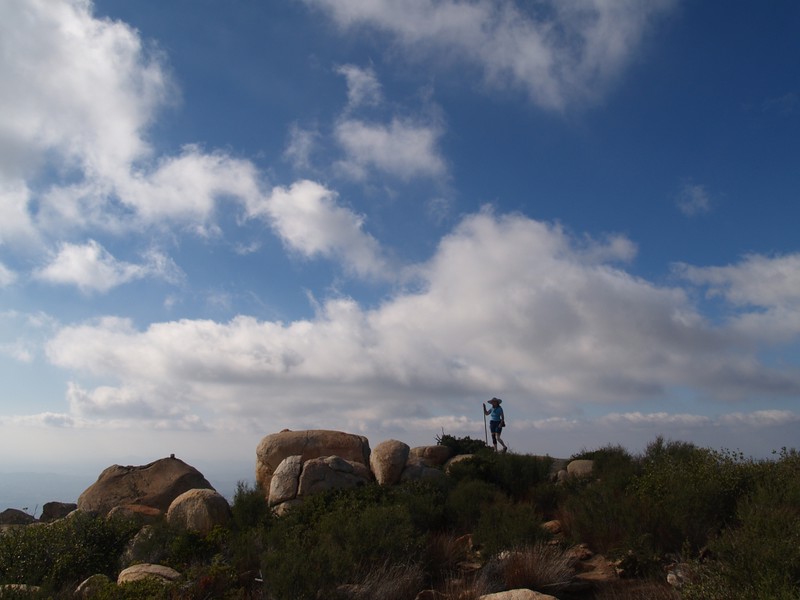 Hiking in the clouds near the summit

We ate lunch up on the summit and simply lounged around for a while.  The views were quite nice, and the clouds were pretty.  The clouds also drifted by and created shade, which cooled us off enough that we wanted to get going.  We had a long way to go to get back to the car.  We met a few other hikers up there, but all in all this was an infrequently used trail, and was much more our usual style.  We tend to avoid crowded trails and prefer to hike further out in the backcountry when possible. 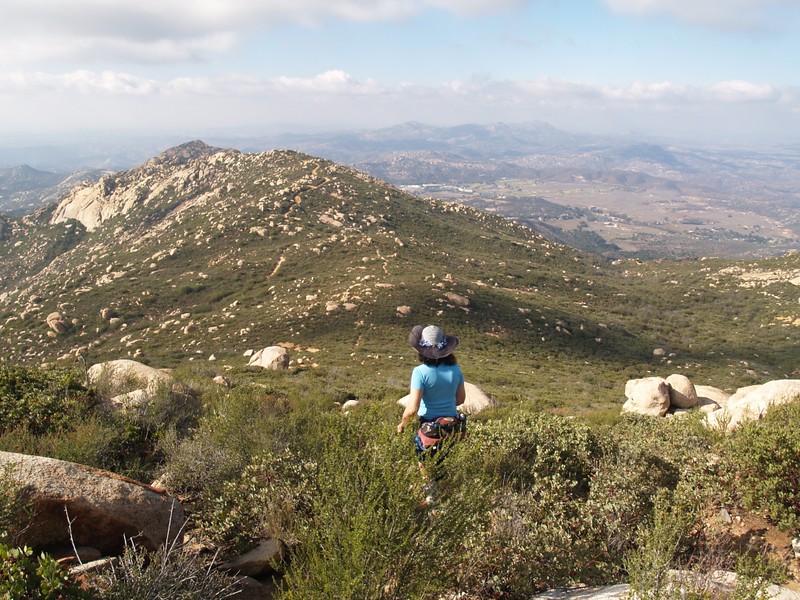 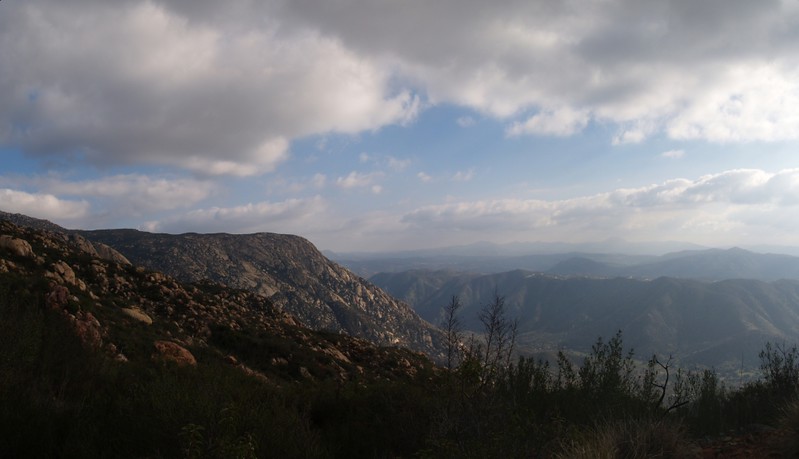 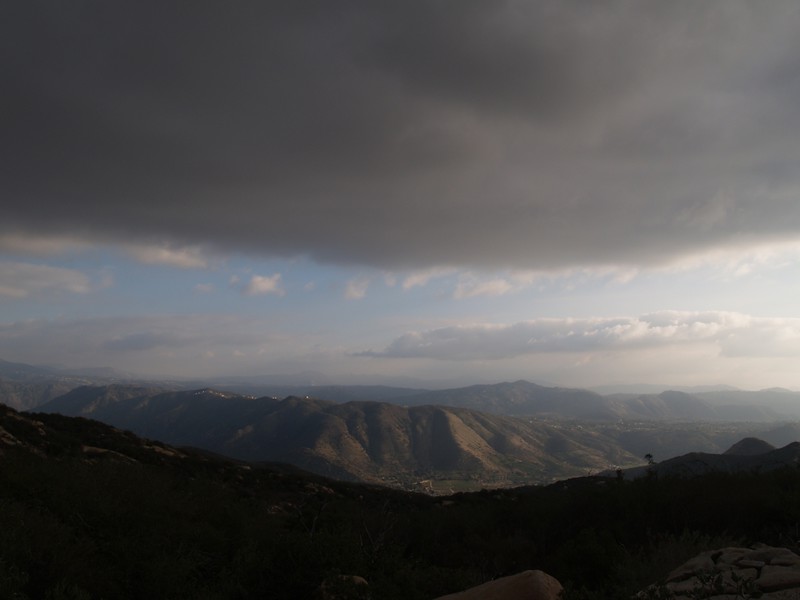 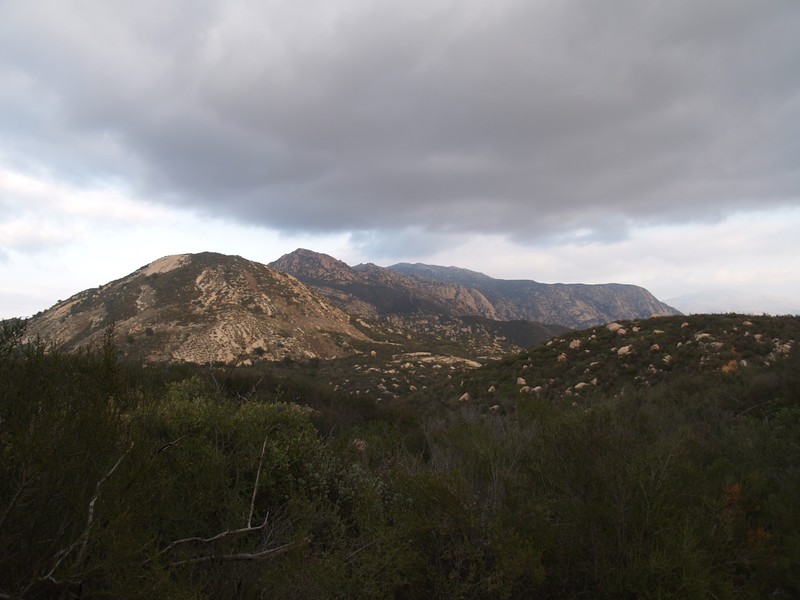 After one last look back to the east, we began descending the final set of switchbacks.  This section of trail was much better maintained that the eastern zone, so Vicki’s knee was much happier.  The steep sections, which were bad enough when climbing them, were a lot tougher on the knees when descending them.  If you have knee trouble, Vicki does not recommend that you make the attempt on El Cajon Mountain; you will regret it.  Luckily, we had thought ahead and carried her neoprene knee brace, so there was no lasting damage, but hiking in a knee brace isn’t much fun, either. 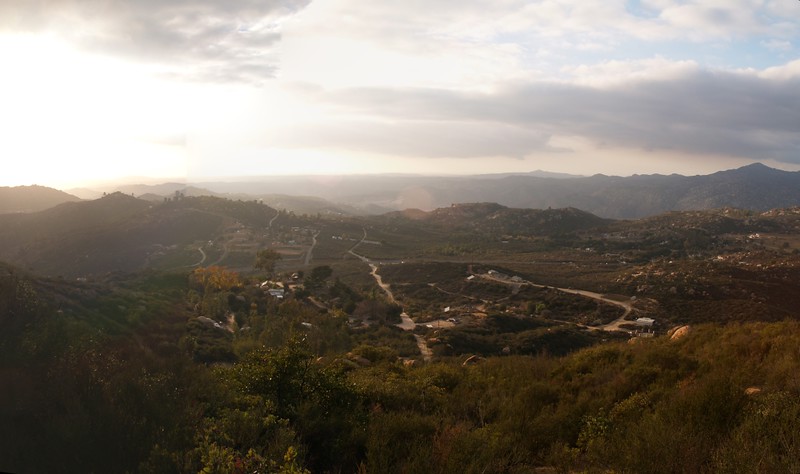 View west as we prepare to descend the final switchbacks 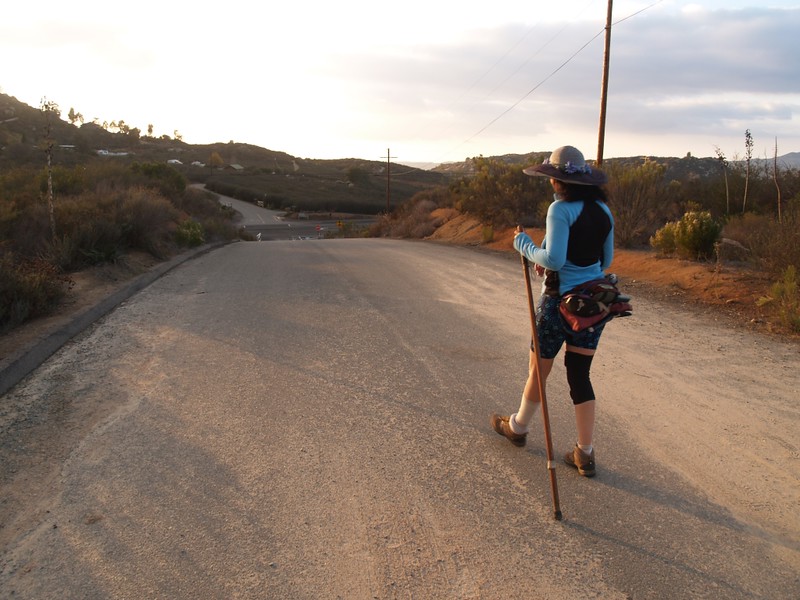 Blue Sky Ranch Road and Wildcat Canyon Road; we’re back at the beginning of the trail

All in all, it had been a long and enjoyable day.  This is not a simple morning’s hike for exercise purposes.  At eleven miles and several thousand feet of climbing, it ranks as a strenuous hike that should only be attempted by seasoned hikers under cooler weather conditions.  Just the same, it was a lot of fun, and is proof that there is plenty of solitude and beauty not far from the heart of a busy city like San Diego. 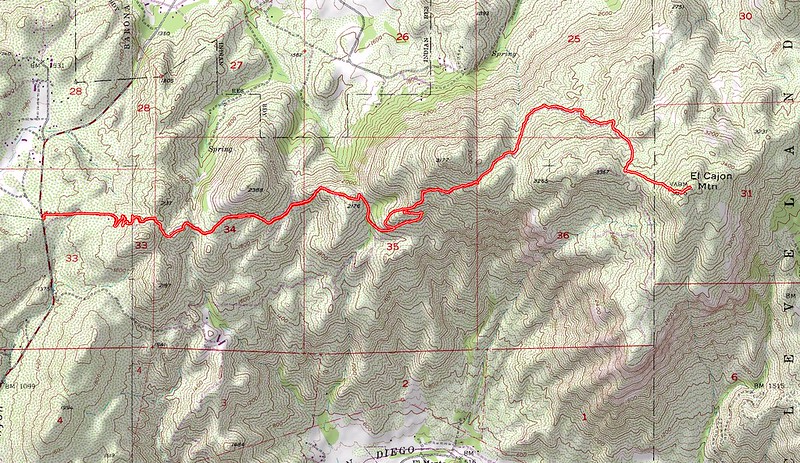