This is yet another simple dayhike, a part of our plan to get out hiking nearly every weekend that we can this summer. We’d prefer to backpack and stay overnight (thus getting TWO days in the mountains) but life doesn’t always allow us such luxury. A dayhike would have to do.

Cuyamaca Peak, at 6512 feet elevation, is the second highest mountain in San Diego County. Its summit overlooks all of San Diego, and on a clear winter day one can see the ocean to the west, the higher peaks of Los Angeles to the north, the desert to the east, and off into Mexico to the south.

We parked in the Paso Picacho day-use parking area, and took the slightly longer Azalea Glen Loop Trail rather than the paved Lookout Road. It was a much nicer hike, being on a trail. It lead us over some flowing streams and alongside some pretty meadows to Azalea Spring, where there was a large water tank. From there we hiked south on the Azalea Spring Fire Road until it intersected Lookout Road. 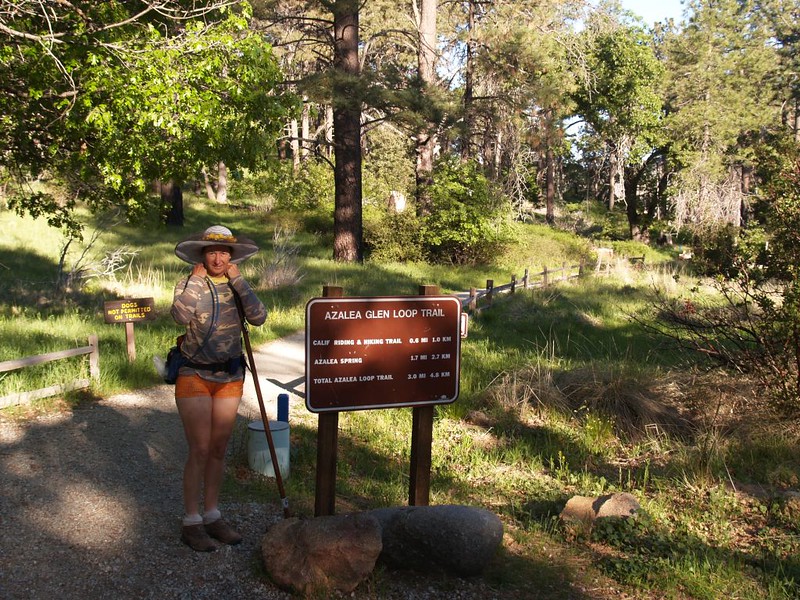 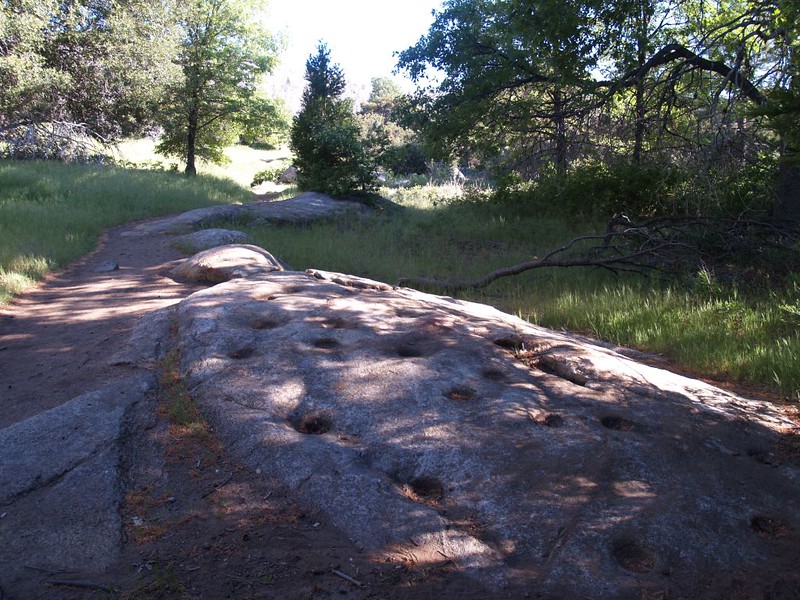 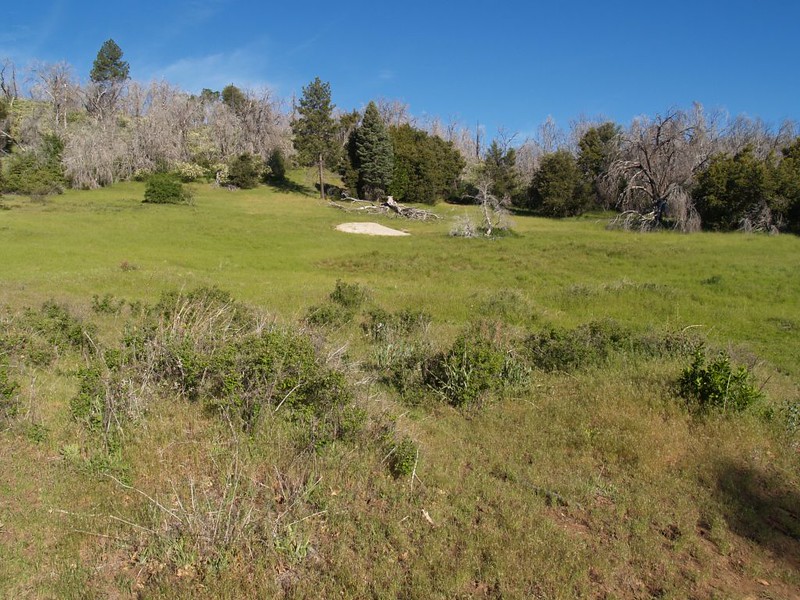 Cuyamaca peak burned almost completely back in October 2003 in the Cedar Fire, which at the time was the largest wildfire in California history. It burned hot, and nearly all the oaks and pines were killed. Some of the oaks re-sprouted new leaves and branches, but the pines didn’t do so well. As is common with wildfires, some areas avoided burning, due to swirling eddies of luck and wind, but there weren’t many areas that survived; still, it was a joy to re-enter the forest we knew of old. Everywhere else was depressing dead trees reaching into the sky, and, after eight years of “recovery”, a head-high impenetrable thicket of lilac-like bushes (a variety of Ceanothus) completely covered the mountainsides. (If it weren’t for the trail crews chopping them back, climbing this mountain would be the nightmare bushwhack from hell.)

Dead Trees and the Impenetrable Thicket 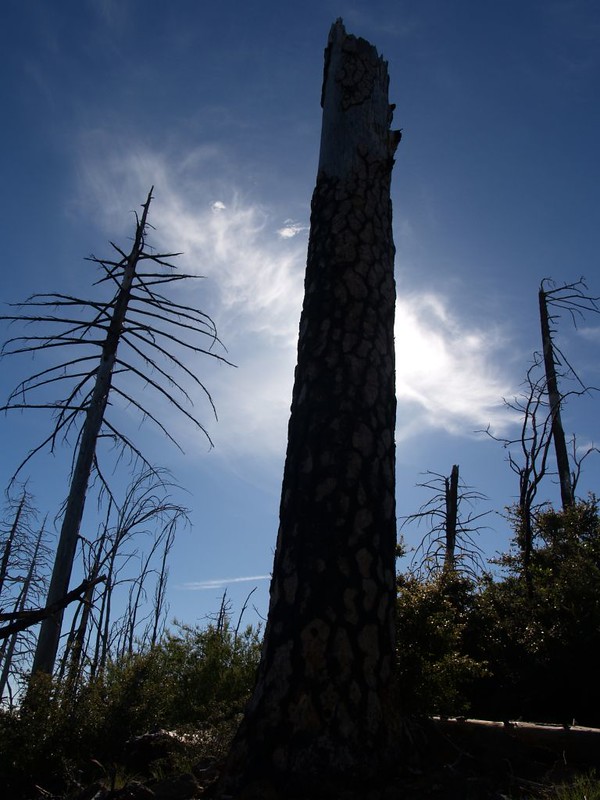 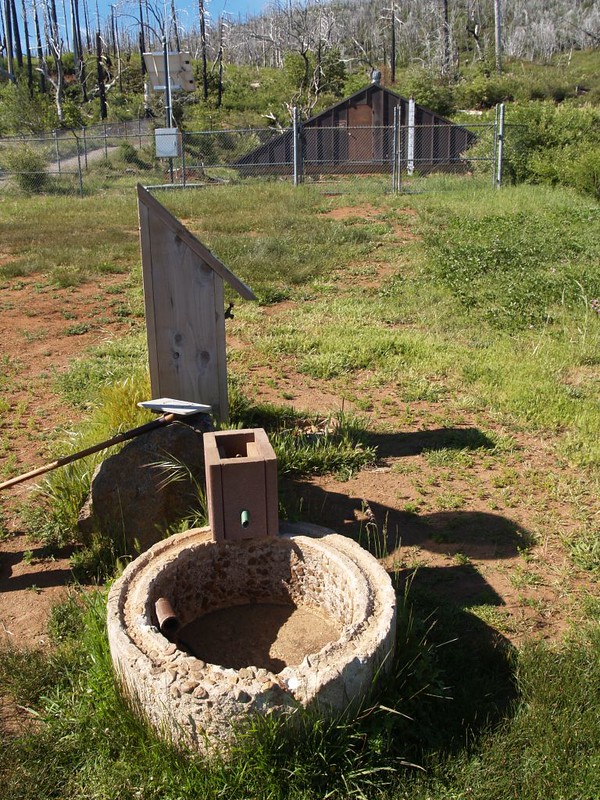 The last time this forest burned was about 50 years previous to the recent 2003 burn, so we know that (at our age) we will never see these mountains back at their former glory. Sad but true. And with the current crop of impenetrable bushes, it seems like it will never happen. But maybe we’re too impatient. Nature works slowly. But how are the new oaks and pines ever to grow up through the dense thicket and eventually overpower the bushes, stealing their light and killing them off? Maybe in another ten years it will be more obvious.

At least one oak tree is taking back the lost ground

Meanwhile, there was some sort of remediation project going on.  There were back-hoes and bulldozers along the road, piles of chain-sawed logs, ash-pits where the logs had been burnt, and the evil bushes had been hacked back for a hundred feet along each side of the road.  New baby pines had been planted, in the hope of restoring the forest of old.  It was only a small dent in a very large park, but it was nice to see some progress.  Some folks might consider this to be “un-natural” or “human-enhanced evolution” but I’d prefer to call it a useful biology experiment.  And making the forest beautiful along one of the major hiking paths in the park seemed like a good idea to me.  It will be interesting to see the difference between this modified area and the untouched area in the years to come.

Hacking back the brush with Big Machines

Some old pines near the top, and many newly planted ones on the right

Interestingly, there was at least one decent-sized patch of the old forest still standing near the saddle before the summit. Yes! It was a pleasure to be able to sit in the shade on an old dead log and breathe the pine-scented air, looking out toward Stonewall Peak to the east with the desert in the hazy distance behind it. We ate some snack, drank some water, and relaxed for a while. This was the sort of scene that made all that uphill hiking worthwhile.

An unburnt area. What it used to be like pre-Cedar Fire.

As for the peak itself, it is the second highest in San Diego County (6512 feet elevation), and has excellent views. It’s about an 1800 foot ascent, so it’s good for some exercise. And on a clear day you can see for vast distances, from the ocean to the desert to Mexico to the high peaks of Los Angeles. True, radio antennas are on top, which make it less pristine, but there aren’t so many that you can’t enjoy it. And there’s a paved road to the top, so you can even ride a bike up (and down!) if you’re so inclined.

Once at the saddle, we popped over the top and had a great view to the west. Someone had placed a nice bench there, a perfect spot. Vicki decided that she’d climbed far enough, and lay down in the shade of a pine to rest, while I climbed to the peak.

The summit had several buildings and numerous radio antennas, as well as a few microwave relay dishes, but there weren’t so many that they detracted from the view. It was easy to walk around the broad summit and gain views from all directions. I hadn’t been up here in nearly twenty years, and it hadn’t changed all that much, aside from all the burnt trees on the mountainsides below.

Panorama shot looking south and west from the summit

Some mountains have a summit block. This one has a summit pole

The hike back down was uneventful.  It was getting hot in the sun, and our feet felt hot in our shoes.  We followed the paved Lookout Road down to the campground, then walked through the campground to the car, the smell of smoke from the late-riser’s breakfast campfires filling the air. 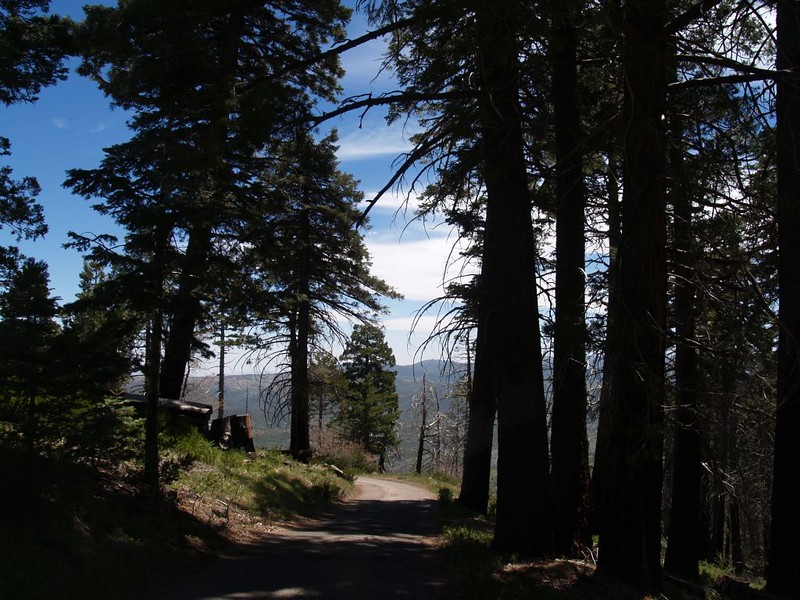 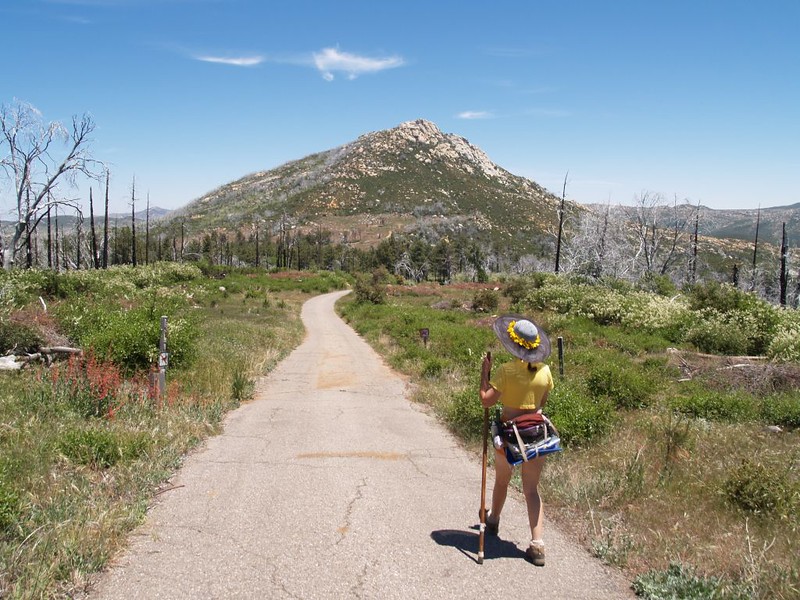 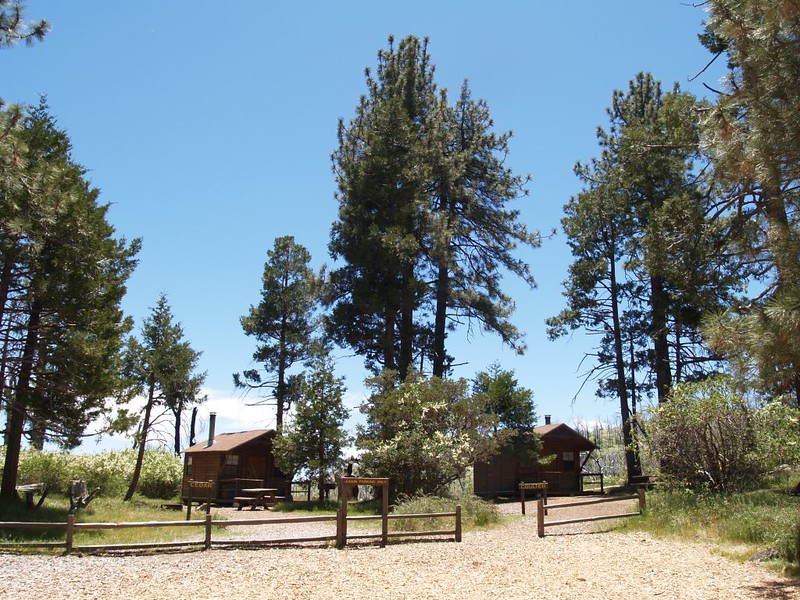 We decided that since it was such an uncommonly warm day, that we would check out Green Valley Falls on the way out.  We hiked down to the falls, where there were plenty of people already wading in the stream, and a few jumping into the pool below the falls. 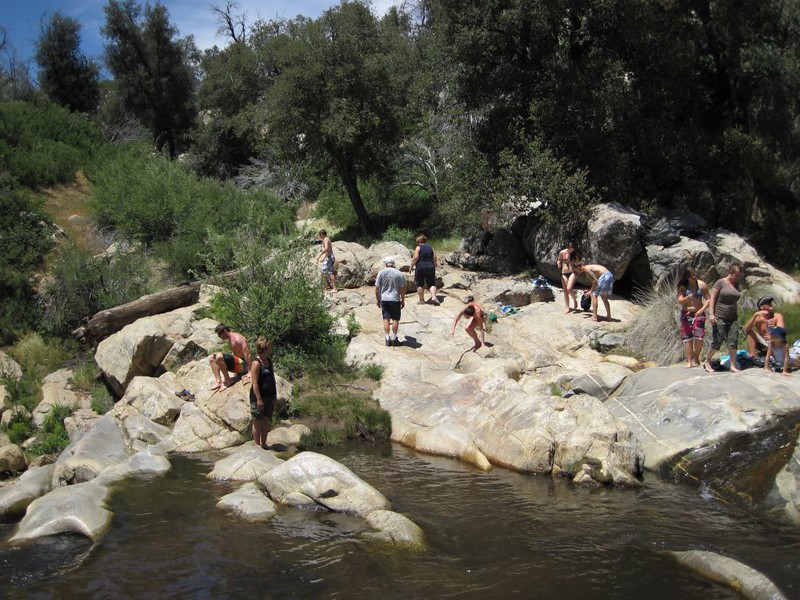 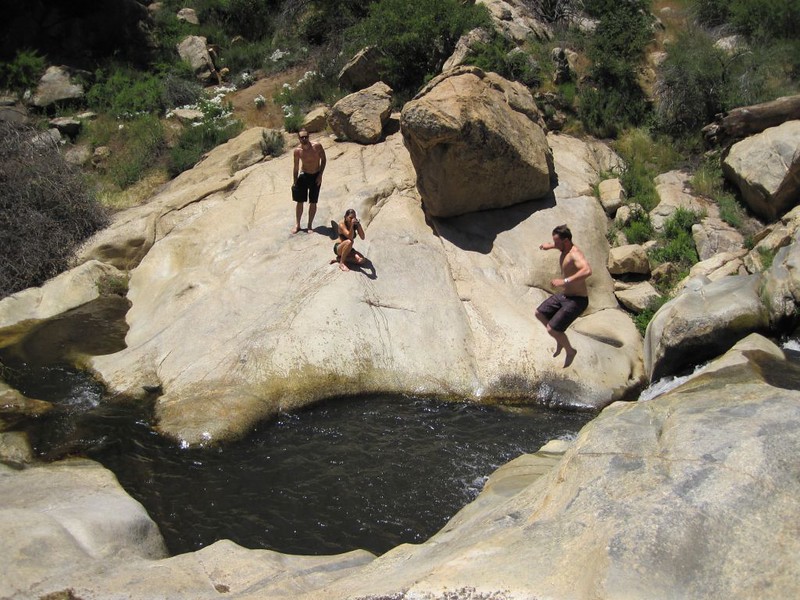 Jumping into the pool at Green Valley Falls

The water was still freezing, as it had snowed a mere three weeks before, but Vicki decided to try a “butt slide” down a slippery rock into a shallow pool simply because it looked like so much fun.  And she immediately jumped up, shaking herself from the cold.  At least she wasn’t overheated any longer!  But enough was enough, and it was more crowded there than we really liked.  We went back to the car and in an hour we were back home, with plenty of day left to enjoy.

Caltopo Topographic Map of the hike

The rest of my photos are on my Flickr Page