This story is about another one of our dayhikes on a section of the Pacific Crest Trail, here in San Diego County. This particular section covers the trail from what is known as PCT mile 101 to mile 111 (i.e. from County Road S22 to the second crossing of State Route 79) near the town of Warner Springs.  It was an easy ten-mile day, with only minimal elevation gain or loss. Being lazy, we chose the direction with a net loss in elevation (south to north), but it wouldn’t have mattered much, as it only gained about 500 feet the other way.  This section of trail was much different than the others we’d hiked, because it never really entered the mountains at all. Instead, it wandered along over miles of rolling grassy pastureland.

We left our house before dawn and headed east.  We took two cars, with our son giving us a ride; he helped by allowing us to leave our car at the terminus in Warner Springs.  The actual hike started when we got dropped off at the S22 trailhead.  By then it was light, but the air was cool, as we were down in a valley bottom where the cold air settles in the night.  And the only way to get warm was to get moving.  We posed next to the Pacific Crest Trail symbol and began hiking in earnest. 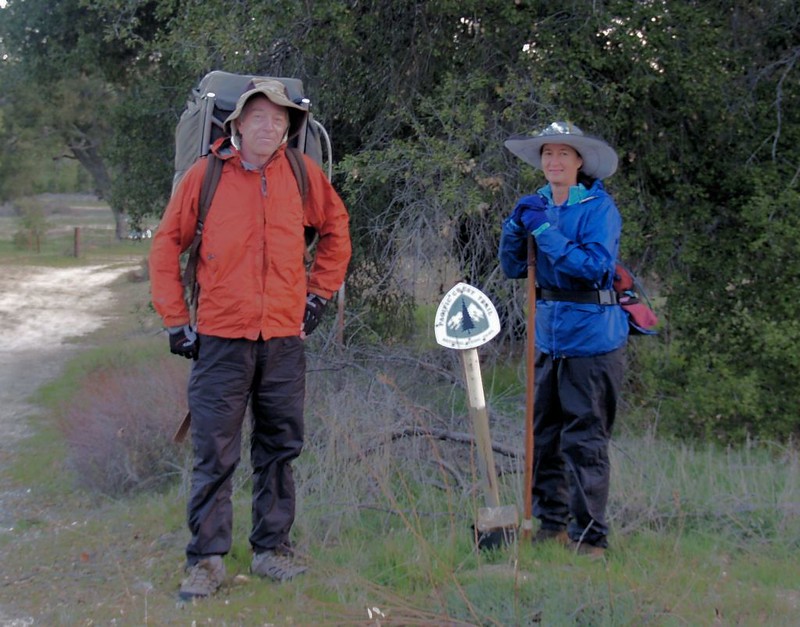 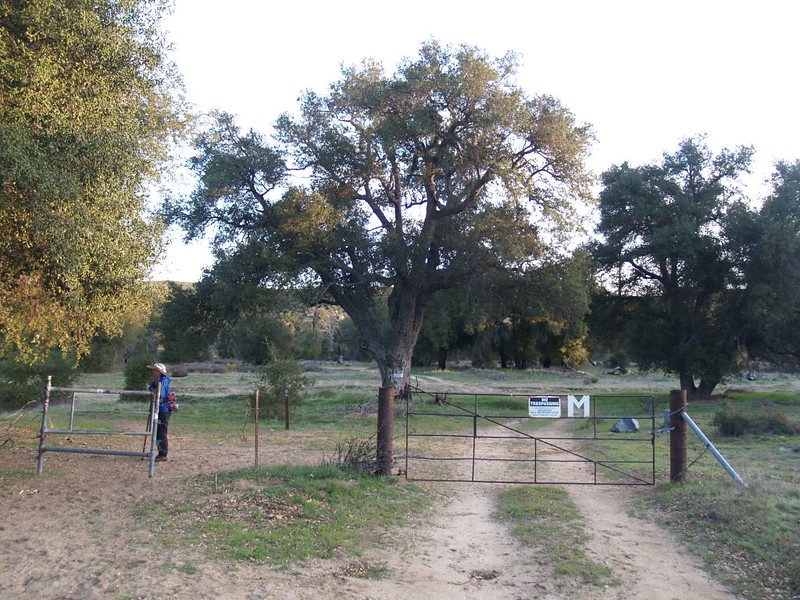 The first pipe gate near route S22 on the PCT 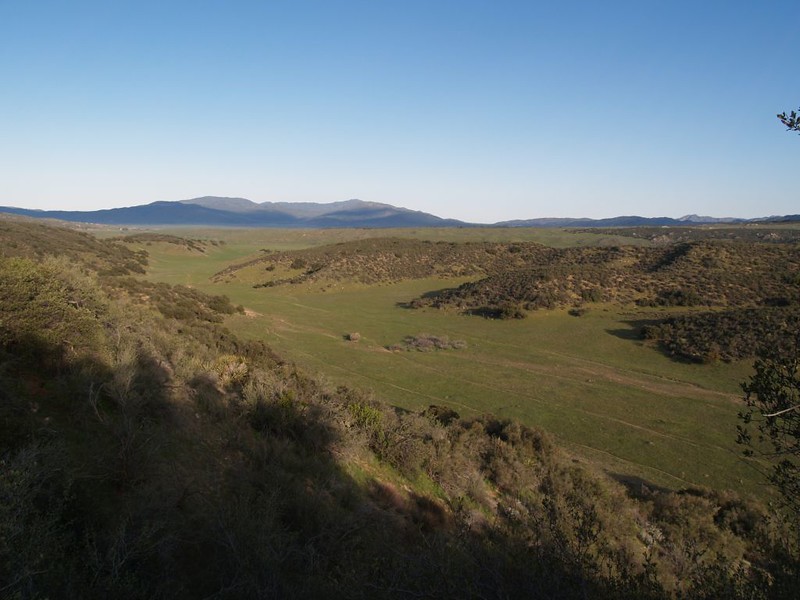 As we hiked, we discovered the dried-up evidence of cattle everywhere (although the cows themselves stayed far away), but we never stepped in any of it.  They were polite cows, who stayed well off the trail. 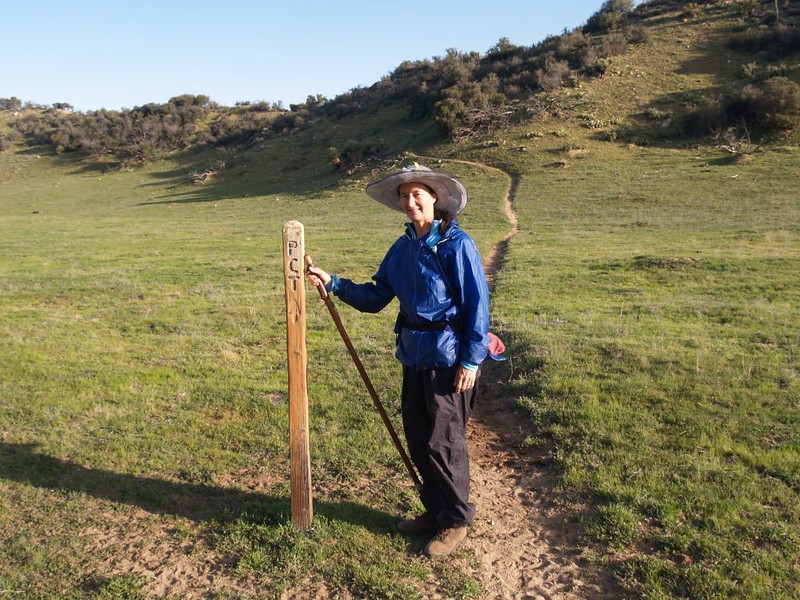 PCT guide post worn down by cows rubbing up against it 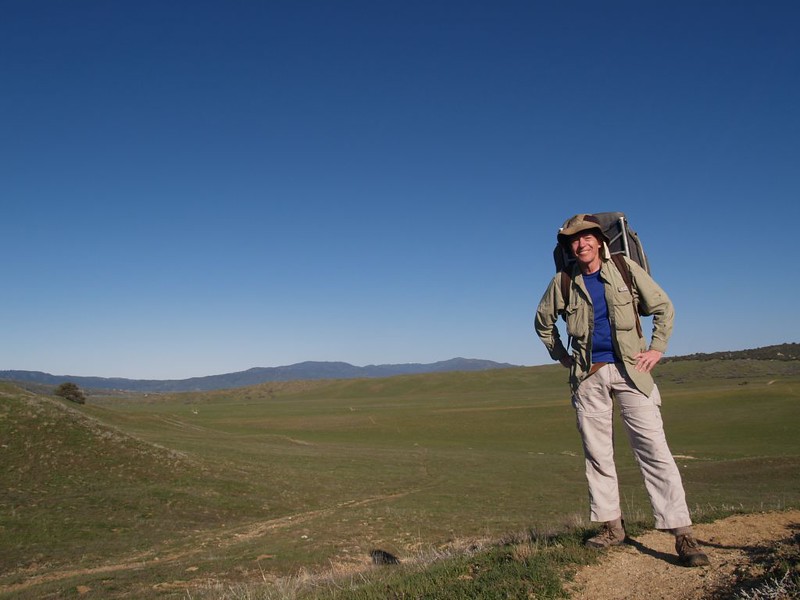 At one point the trail ran alongside San Ysidro Creek, which was flowing at this time of year, and it was very pretty down in there. Grassy glens and huge old oak trees. A nice place to camp. Unless the cows wandered in to join you for the night. 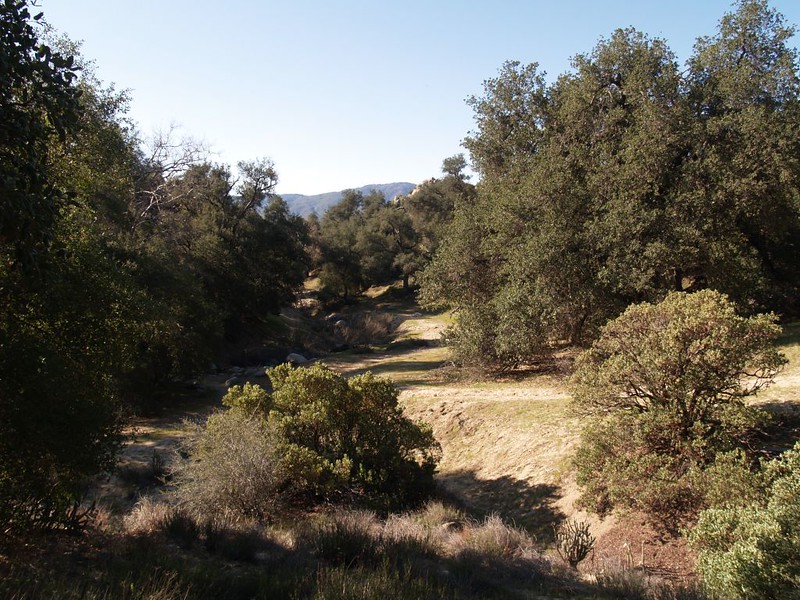 And then we were out of the woods, hiking in the open once more, walking through wide-open cow pastures with views stretching out to Palomar Mountain in the north, and the Valle De San Jose in the west. 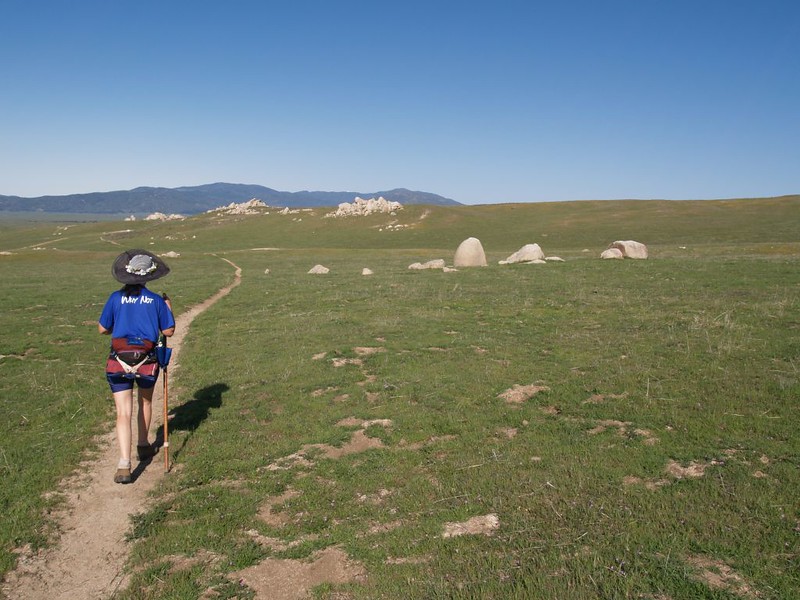 Heading north across the meadow toward Eagle Rock

Eventually we reached Eagle Rock, a huge stone formation in the shape of an eagle, wings and breast and all. It was at the upper end of a spine of rock jutting out of the broad pastureland. We found it by reading a small notice tacked to one of the PCT trail guideposts. It was really quite amazingly eagle-like. We took some photos and then found a nice shady spot under an oak further down the ridge of rocks, so that we had an excellent view of the entire valley, all the way down to the dam at Lake Henshaw. As soon as lunch was finished we saw in the distance two large groups of hikers approaching from the north, about twenty people! I was thinking that we might meet one or two folks out on this lonely trail, but not twenty. It turns out that they were part of a San Diego Natural History Museum nature walk, specifically visiting Eagle Rock. We spoke for a bit, and all agreed that it was a perfect day for hiking. 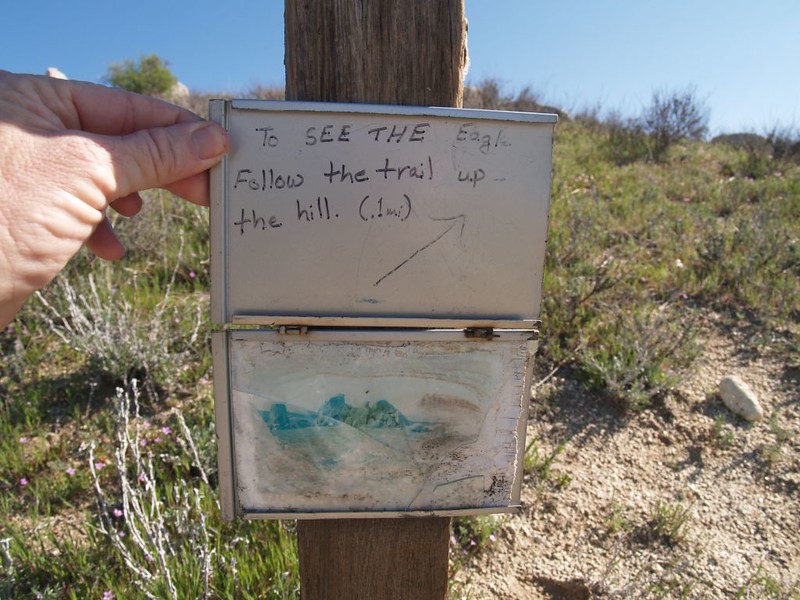 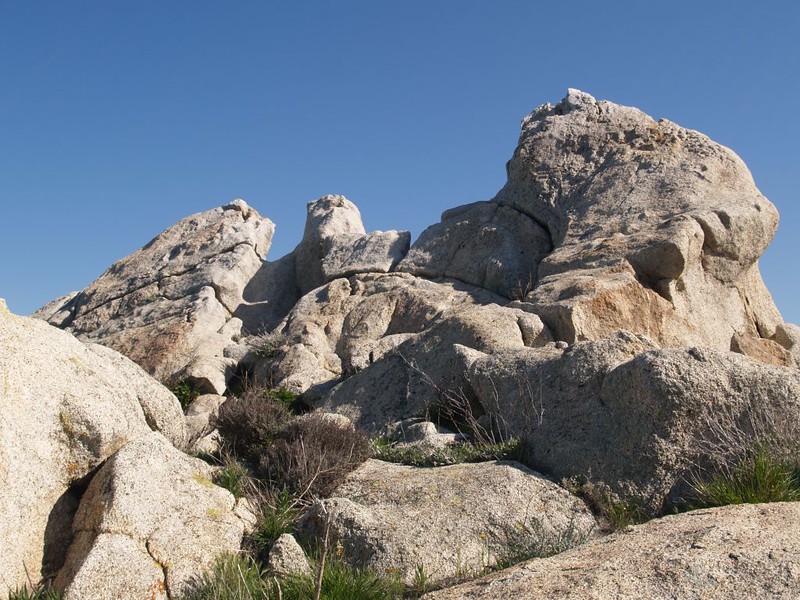 The back side of Eagle Rock – not particularly eagle-like 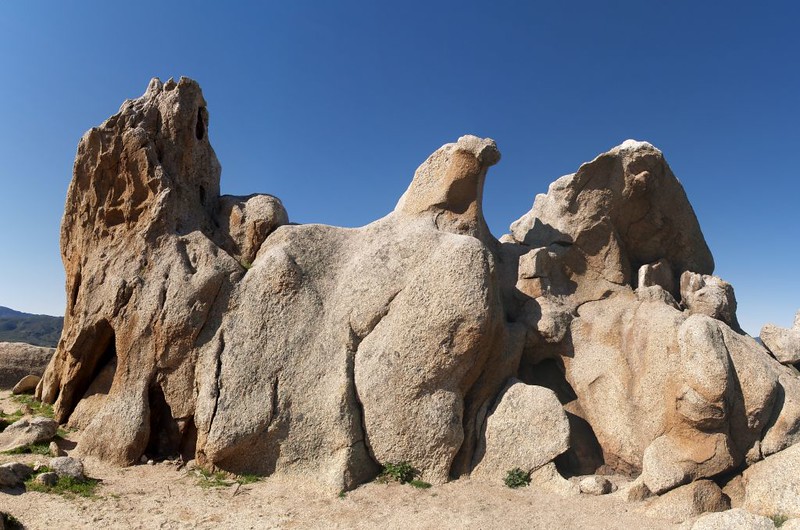 Eagle Rock south of Warner Springs on the PCT

Soon enough we dropped down into a canyon and hiked alongside Canada Verde, a small creek. The trail slowly lost elevation as it headed toward route 79 in Warner Springs. It was relaxing, hiking downhill under the oaks and sycamores, the huge trees growing strong, boughs spread wide in the sun as they dipped their toes in the moist earth near the stream. 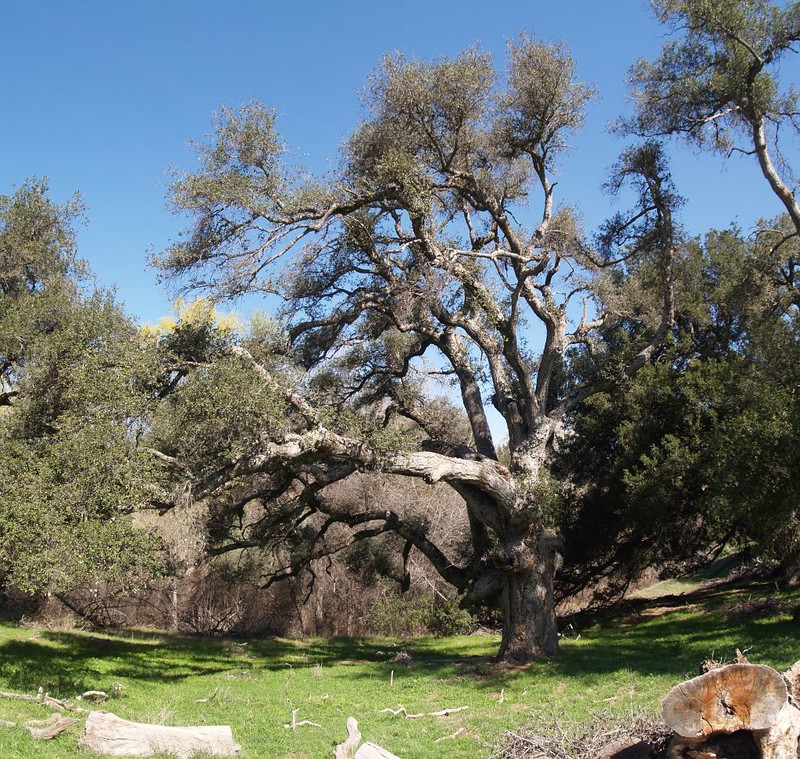 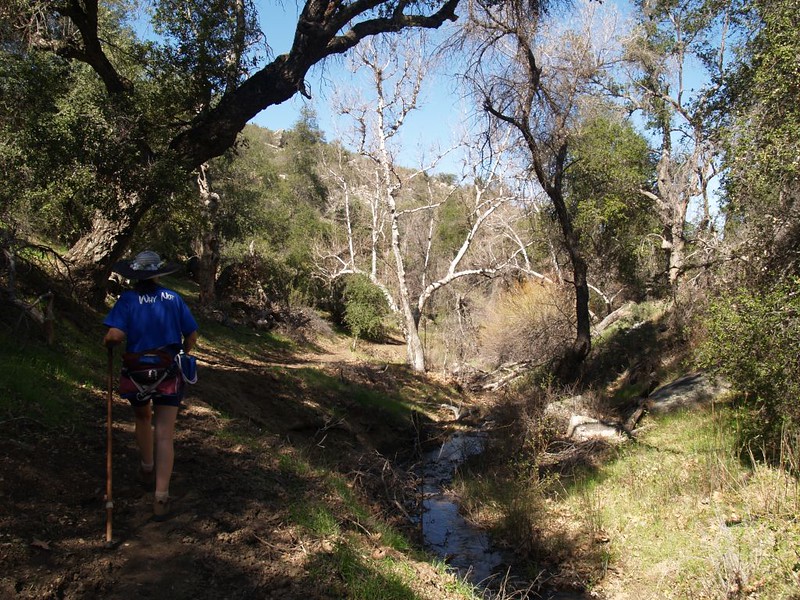 We opened a “pipe gate” (designed to automatically close, thus keeping the cows inside) and found ourselves at Route 79 in Warner Springs. There were signs on the PCT posts giving us directions to the post office, as this is where most of the PCT through-hikers send their first major re-supply package after starting their hike at the Mexican border, 109 miles to the south. From my reading, it appears that PCT through-hikers are expected to hike roughly 22 miles per day, with a full backpack and all supplies, day after day, for months! Indeed, there are some parts of the trail that are so remote you really HAVE to hike this fast, or you won’t be able to carry enough food to make the next encounter with civilization. PCT through-hikers are hiking machines, plain and simple. Why? Because they have to be. 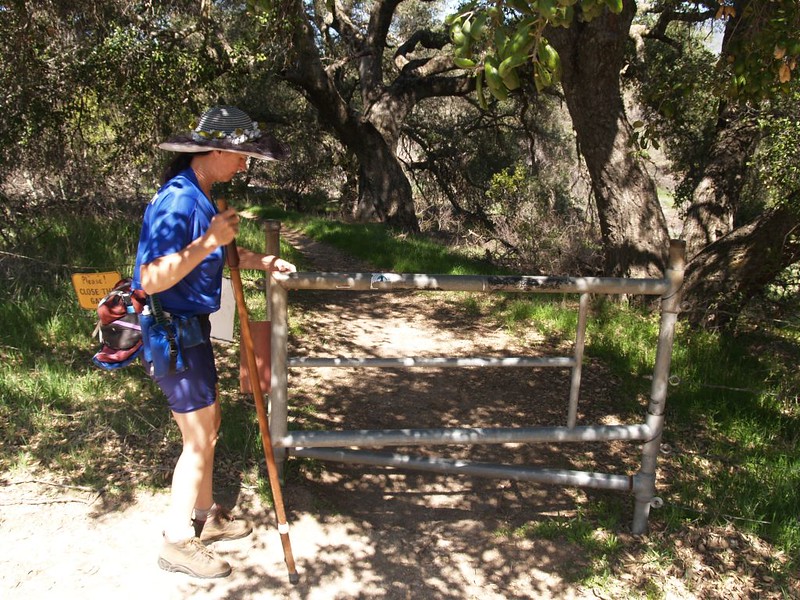 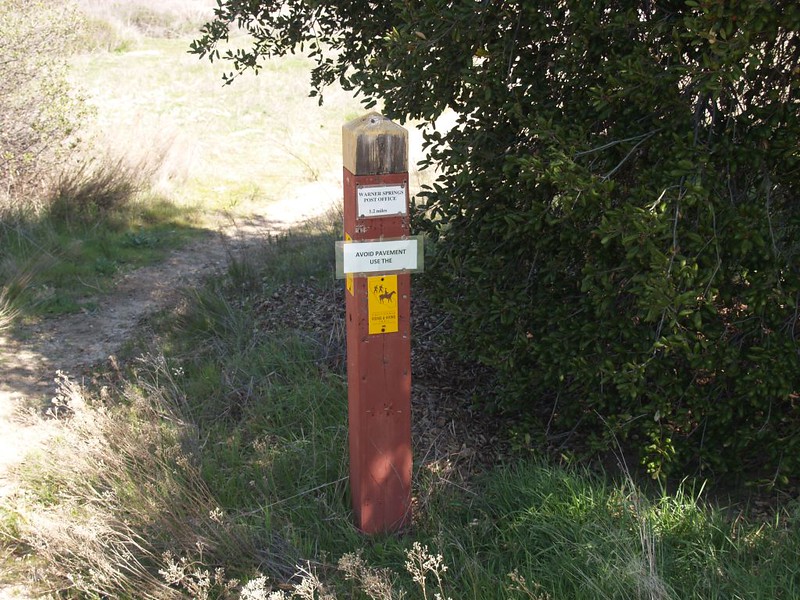 We crossed Route 79 and continued hiking north toward the second intersection with Route 79, where we’d left our car. This next two miles was very similar to the grassy cow pastures we’d seen earlier, except this time there was no sign of cows. But there was plenty of “sign” of horse. It was a giant horse pasture, instead. There was one high spot where we actually saw some horses down in a glen to the east. Interestingly, the pipe gates on this pasture weren’t simple auto-closing gates. These gates were secured with small chains and snap-clips that only humans can operate. Horses are plenty smart enough to figure out how to open a gate that would stymie an entire herd of cows. But horses can’t open snap-clips, even if they can see what they need to do to open the gate. Sorry, horsies! Opposable thumbs rule! 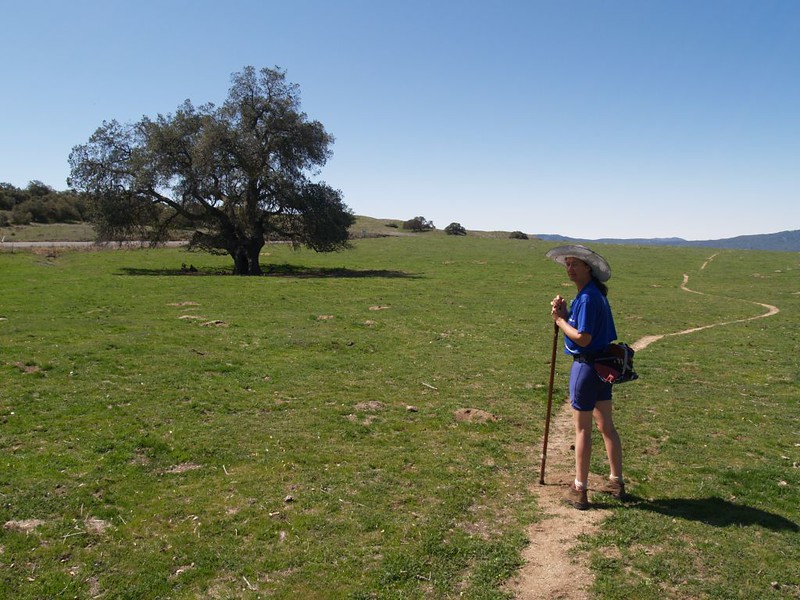 Large Oak in the horse pasture 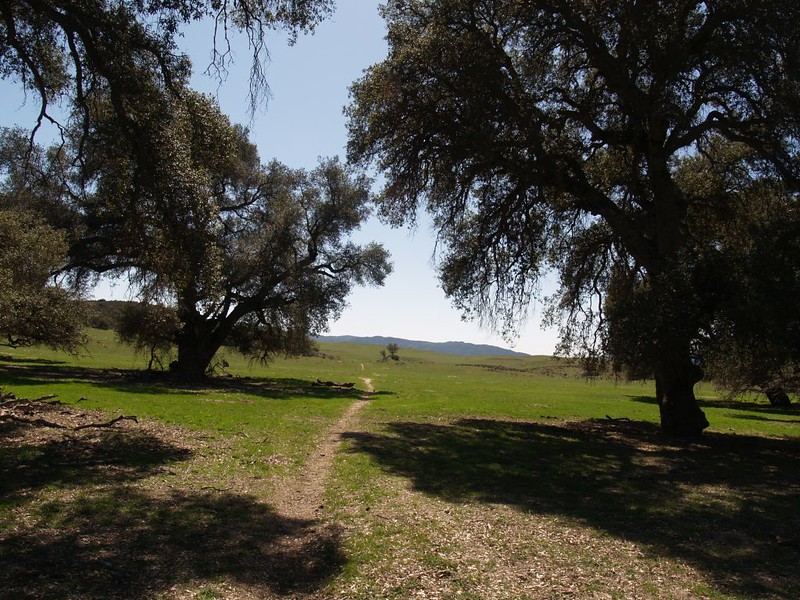 We left the horse pasture through yet another gate, and hiked alongside Agua Caliente, a dry creek bed. We came upon what looked to be an abandoned campground, and found at least one water spigot that worked. There would be PCT Through-Hikers using that spigot all too soon, when the great rush began in a month or so, in late April. After that, the hike was essentially finished. The trail crossed under route 79 and continued on north, but we hiked back to our parked car. 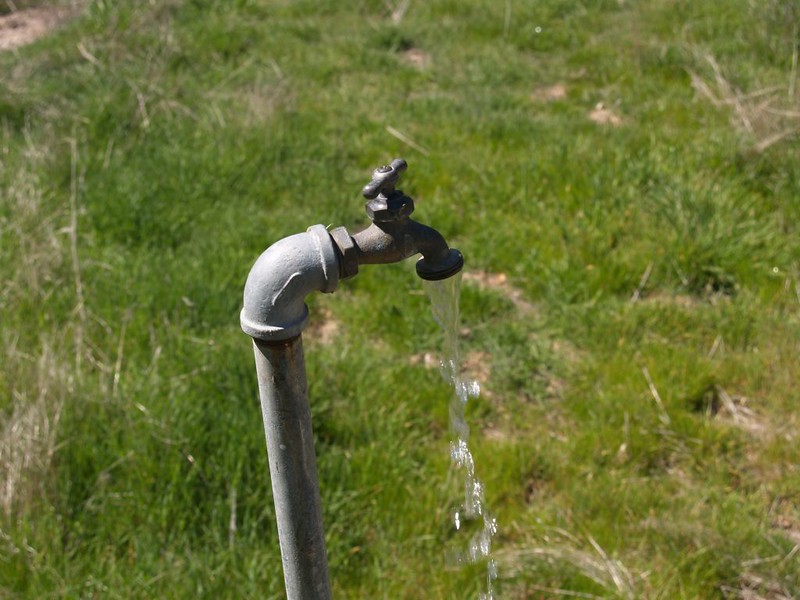 Water faucet in the campsite near Route 79 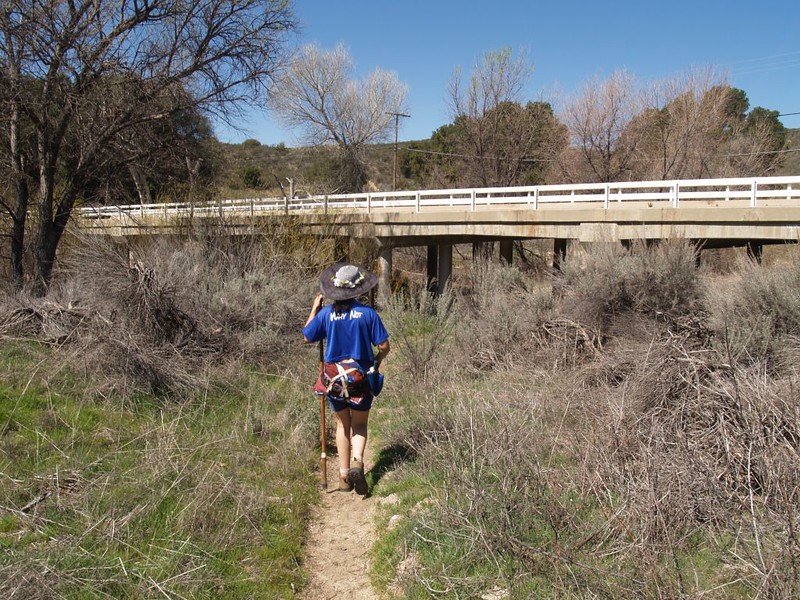 Crossing under the Route 79 bridge by Agua Caliente Creek 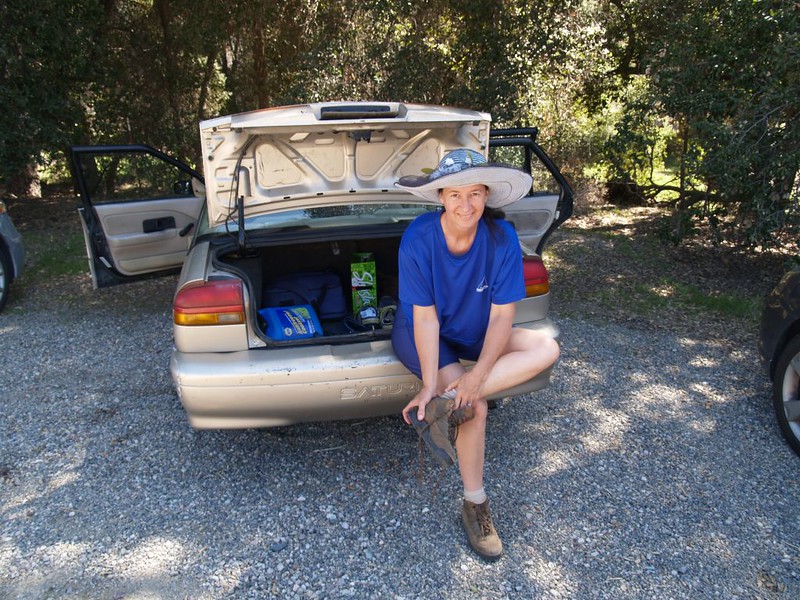 It was still early afternoon, and we had completed yet another section of the PCT! This was an easy hike, but the next section (the one to the south, 24 miles long, which we’d skipped this time) would be much harder, and require an overnight stay.

Please check out my other photos from this hike on my Flickr Page.

Also, you can view my GPS track on a topographic map on my Caltopo Page.