My brother and I decided to take a twilight paddle across the Great South Bay, from Jones Beach Island to Massapequa.  We left one car on shore and took the kayaks to the starting point, which we figured would probably be upwind. 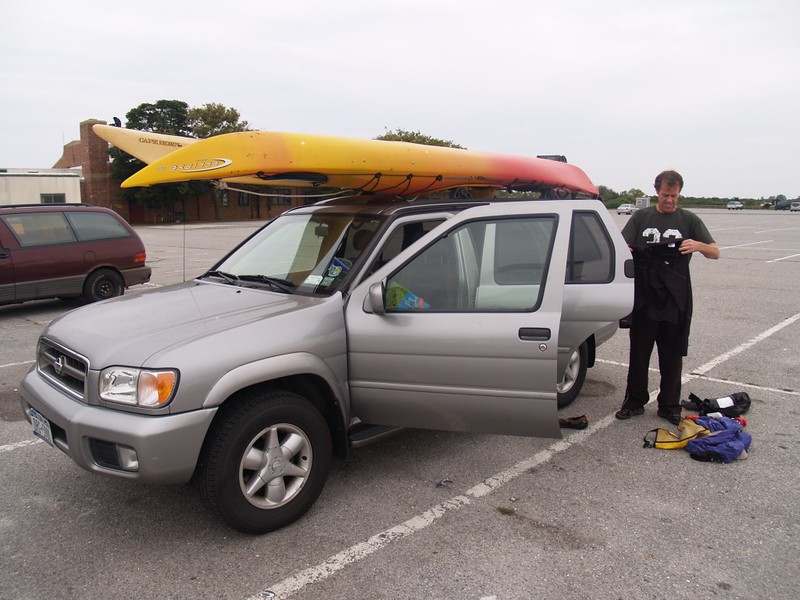 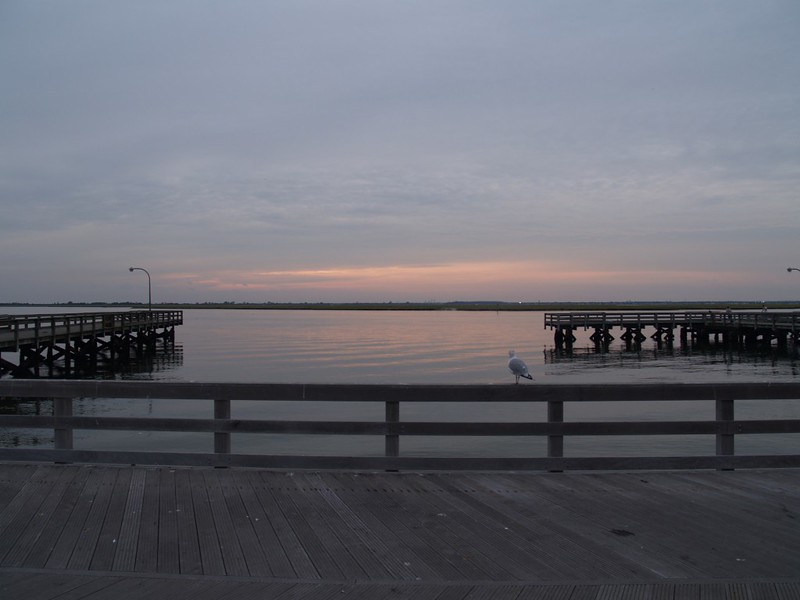 Looking west from the fishing piers. It’s already nearing sunset and we haven’t left yet.

We unloaded the kayaks and carried them to the water. We had to carry them quickly as the mosquitoes were awakening for the evening. We got in as fast as possible, and began paddling away from shore. Once we were out in the bay the bugs went away, thank goodness.  But it turned out that the water was like glass, and there was no wind.  We may not have gotten any help toward shore, but at least there wasn’t any chop to contend with. 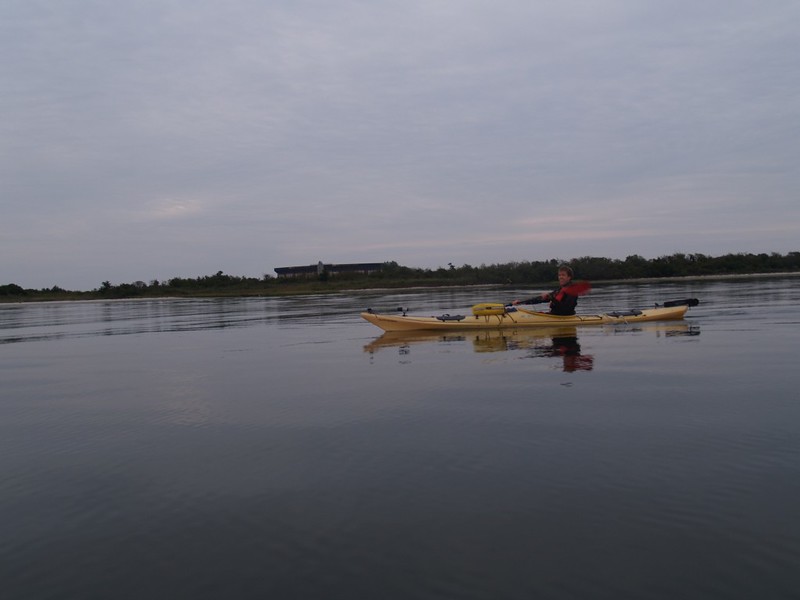 Paul with the Jones Beach Theater in the background 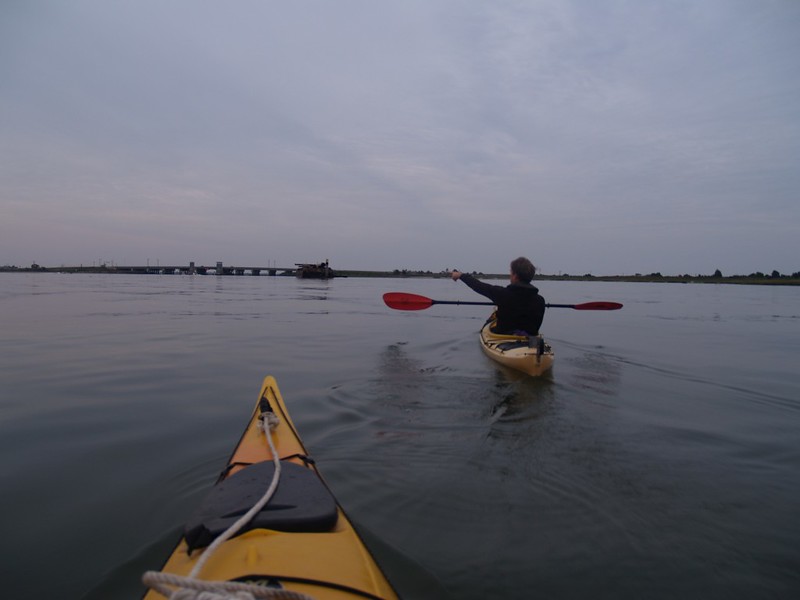 We’re heading for that drawbridge up ahead

We were also hoping that the tide was heading in, thus helping us along, but our timing was off. Luckily it wasn’t an ebb tide! It was more like slack tide, but that meant that we had to paddle every last bit of those six miles across the bay. As it turned out, we had a fun paddle, as we were in no rush. The sunset was excellent, and after that the cameras became useless. But the paddling went on, long into the peaceful night. 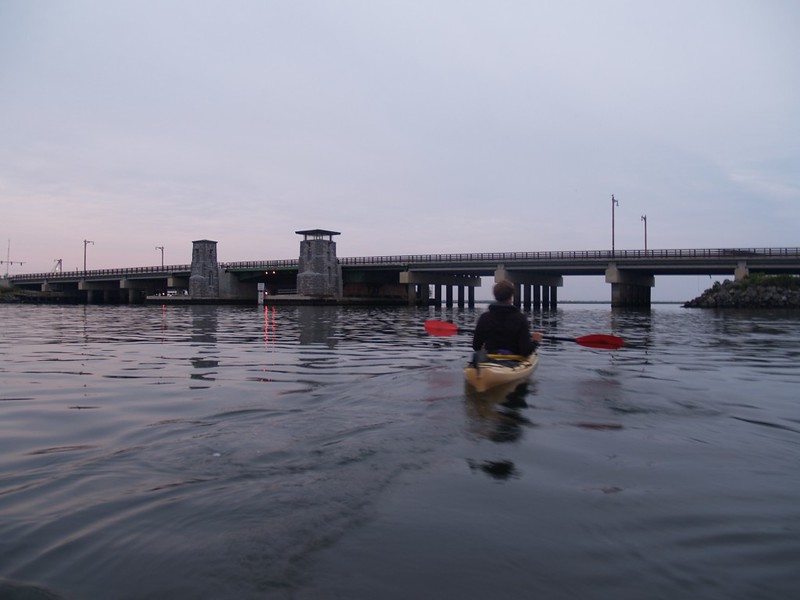 Nearing the drawbridge. We’ll be passing under Wantagh State Parkway. 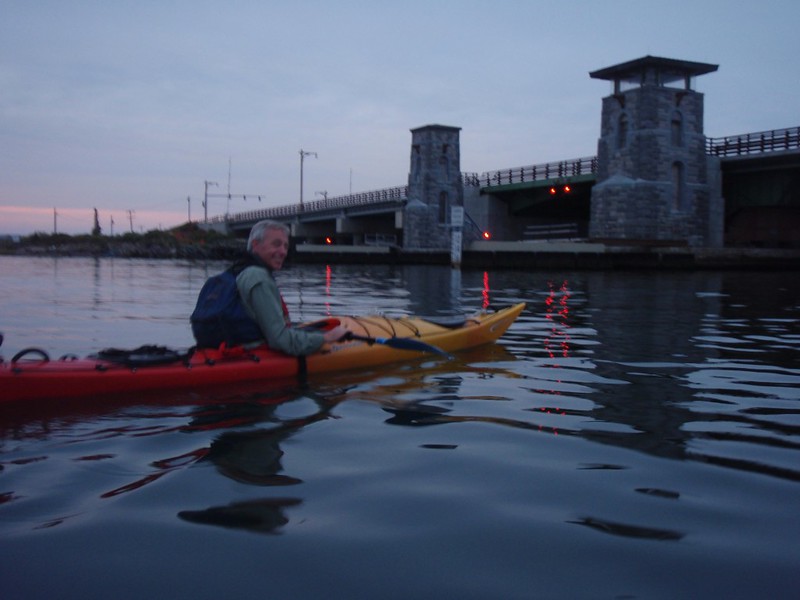 Me at the drawbridge. We have a very shallow draft so we stayed out of the main bridge channel.

Panorama video on the Great South Bay at Sunset 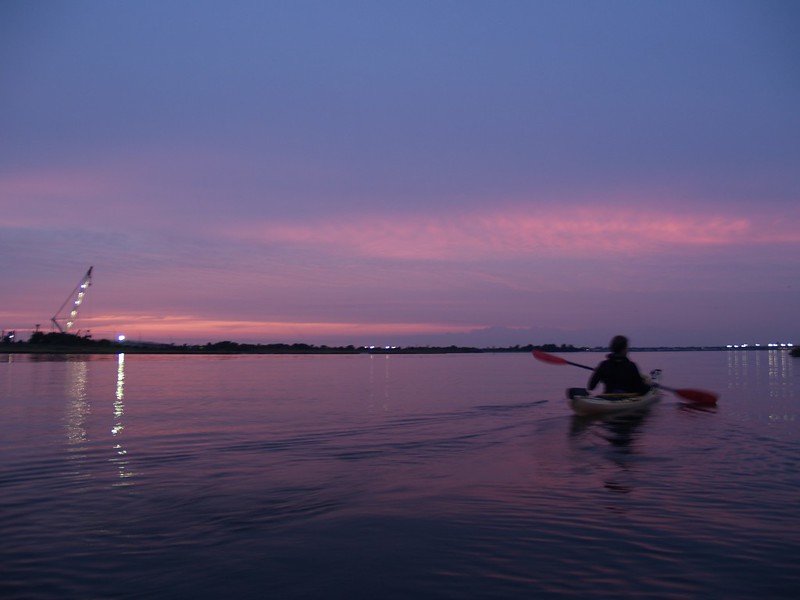 A tranquil time to paddle

As darkness fell over the water, the seabirds flew in to their nesting places on the small, reedy islands, settling down for the night. We spoke in quiet tones, as our voices traveled easily over the water. We had headlamps, and my brother brought his horn and other safety devices, but it was nicer simply paddling along in the darkness. We stayed near shore in the shallows, not out in the main channel where some maniacal speedboat might obliterate us. Naturally, the only speedboats we saw were far away, and we paddled on in the dark. If the Coast Guard came by we’d turn on the headlamps, to make them happy by showing them that we were safe. As we got closer to land we saw all of the expensive homes lining the bay and the canals, the people inside watching TV, oblivious to our existence. We practiced paddling ultra-quietly, as if we were a stealth invasion force. All we needed was to have our faces blackened and we’d be some pretty tough commandos. But no. We were just two tired kayakers who wanted to find a place to land, get out of those constricting hulls, and stretch our legs! We arrived back at the second car and did the car-shuttle, and drove home. The only thing left to do was hose down the kayaks with fresh water. This is the part of boating that no one likes, but we knew that it had to be done. It looked as if our evening adventure was over.

For additional photos and videos see my Flickr Page.

For a map of our GPS track across the bay see my Caltopo Page.