We began the adventure by checking in at the outpost.  We already had a reservation for a canoe, so it was easy.  We thought about renting two kayaks, but my sister knew that kayaks were annoying because you can’t get out of them easily.  Plus, with a canoe one person can paddle while the other takes photos.  This last point sold me.  The driver already had our canoe on a trailer, and we jumped into the passenger van and headed upstream to the launching site, at Burnt Bridge. 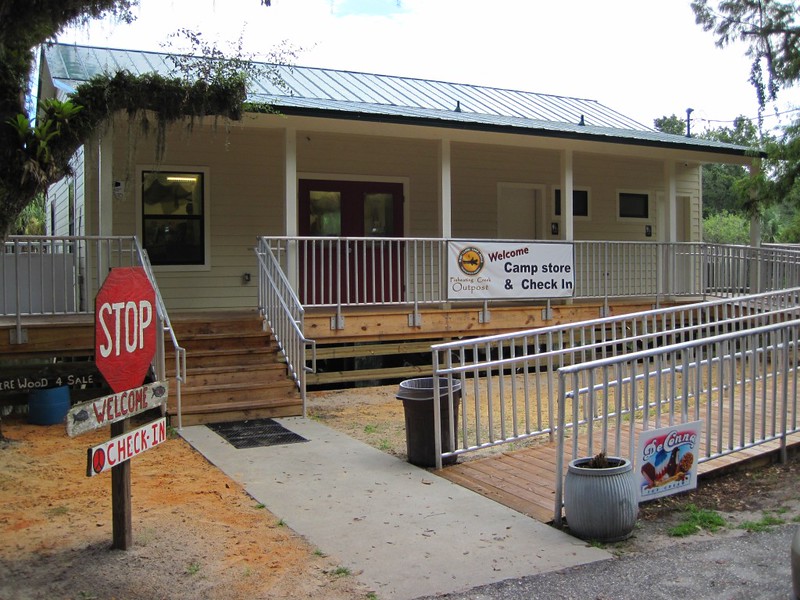 Fisheating Creek Outpost, camp store. Check in area for the campground and also for the canoe and kayak rentals. 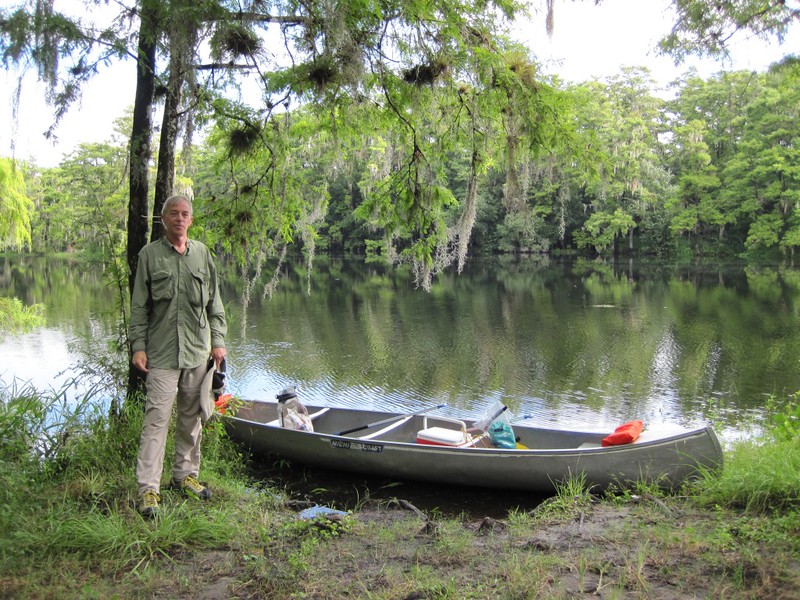 Me and our rental canoe, at the Burnt Bridge entryway to the Fisheating Creek Wildlife Management Area.

The burnt bridge used to cross right there, but it’s gone now.  Why? Because it burned!  The gentleman who dropped us off told us that they used to run moonshine and other alcohol across this bridge back in the good old days.

He unloaded the canoe, handed us life jackets and paddles, and wished us a fun day.  We were all alone on the river at that point, and had to paddle to get back to civilization.  And that’s exactly what we did.

Now, it should be mentioned that several tropical storms had recently finished dumping over twenty inches of rainfall on parts of the Florida peninsula, and the water level throughout the Everglades was extremely high.  This made paddling the route interesting.  On the one hand, there was plenty of water, so there would be a nice current flowing, with little danger of the canoe bottoming out.  On the other hand, there was almost too much water, so areas that would ordinarily be inaccessible were now available to us, and this was both a blessing and a curse.  We could explore more areas without leaving the boat, but we could also get swept away by the strong current into the wrong section of the stream.  Indeed, this happened to us once, but we found our way (after some serious upstream exertion) back to one of the numerous “trail” signs that were posted along the route.  Thank goodness for those signs! 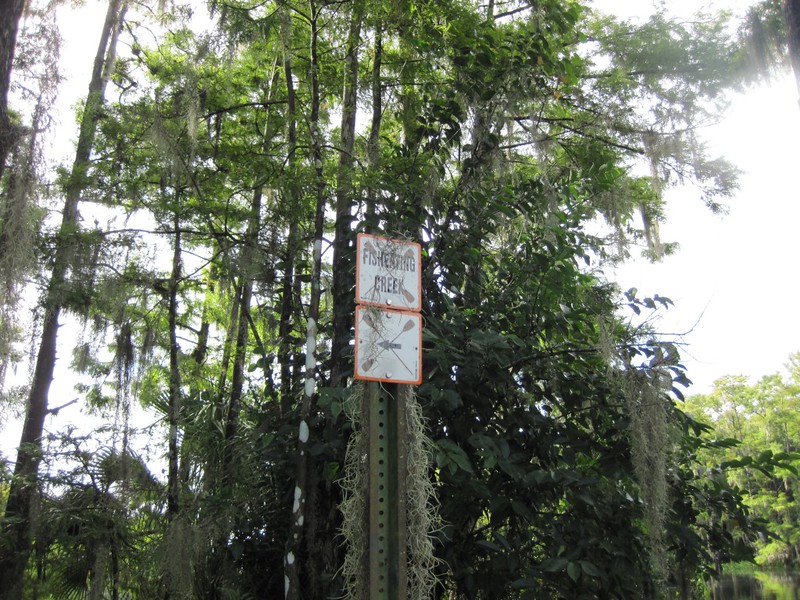 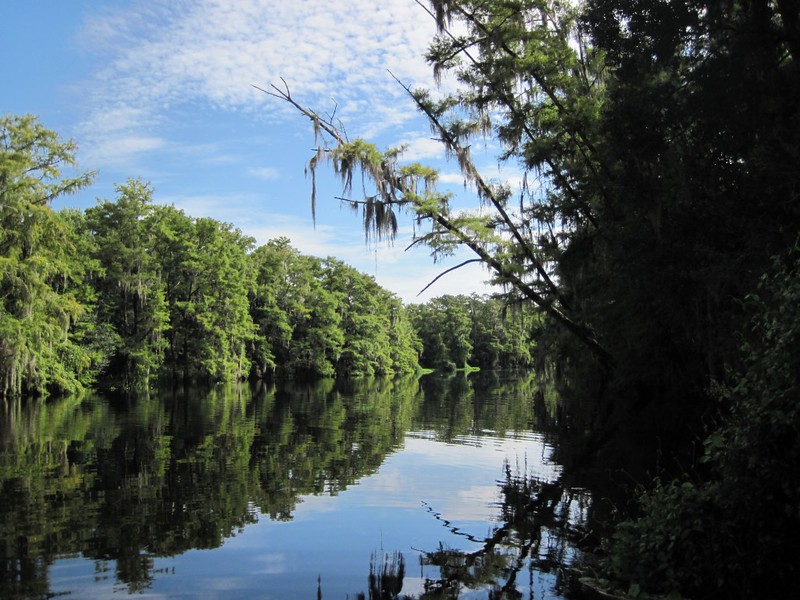 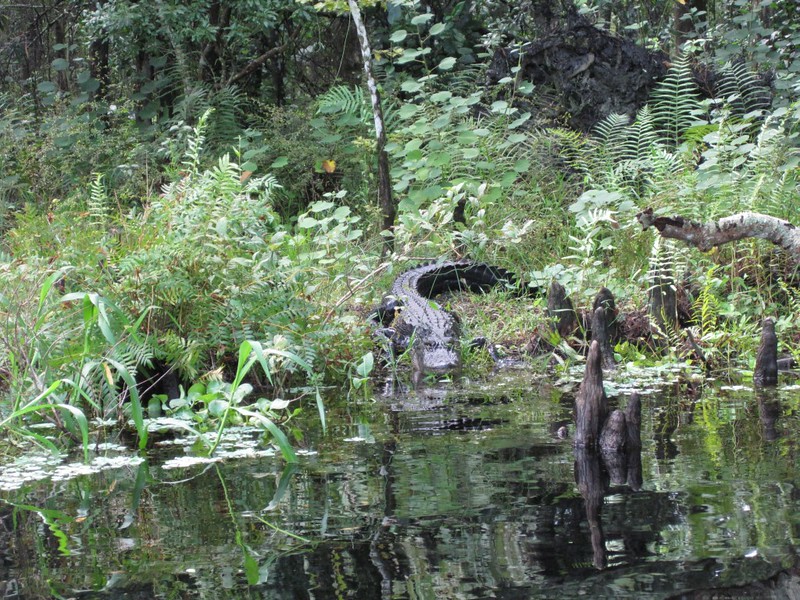 Quietly drifting down the creek watching the cypress trees pass by 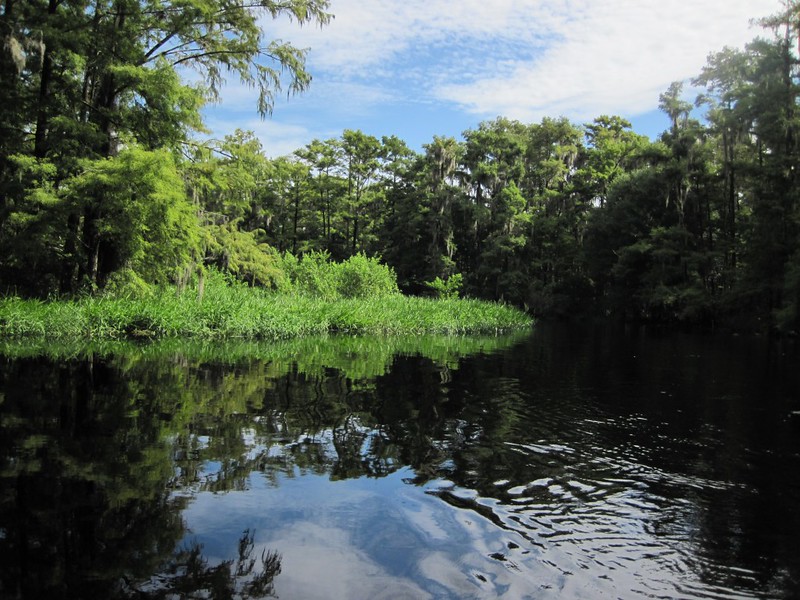 The creek wanders back and forth as it travels along, lined with cypress trees 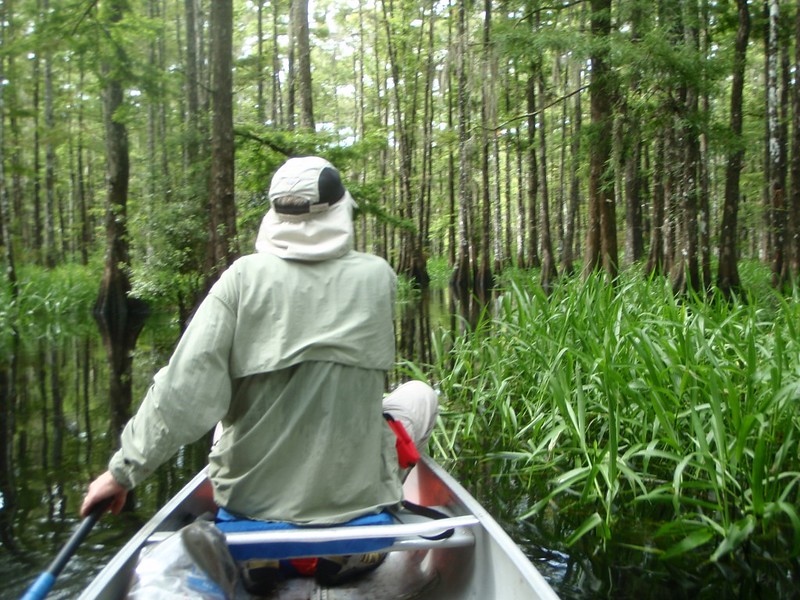 The creek channel became narrow and difficult to follow. All this high water made everything look like a channel!

After the initial problem with route-finding, the creek became much easier to follow, although I must admit that we became much more interested in continuously scanning for those trail signs!

In general, our method of travel was simple:  We used our paddles primarily to keep the boat heading in the right direction.  The current did the main work.  Plus, it was extra-nice of my sister to take the back seat in the canoe, as that is where most of the steering happens, which freed me to take lots of photos.  And everywhere I looked seemed photo-worthy, so I took tons of shots.  The forest on each side was dark, while the trees on the shore were in the sun, and, not surprisingly, plenty of shots ended up with exposure issues.  The dark forest was hardest to portray, as there were places where it was truly dark and sinister-looking, with Spanish moss hanging down like ghoulish raiment, and hundreds of knobbly cypress “knees” sticking up all over the place, potentially hiding deadly alligators and water moccasins.  But the river itself was calm like glass, and the puffy tropical clouds in the sky reflected wonderfully.

And on we drifted. 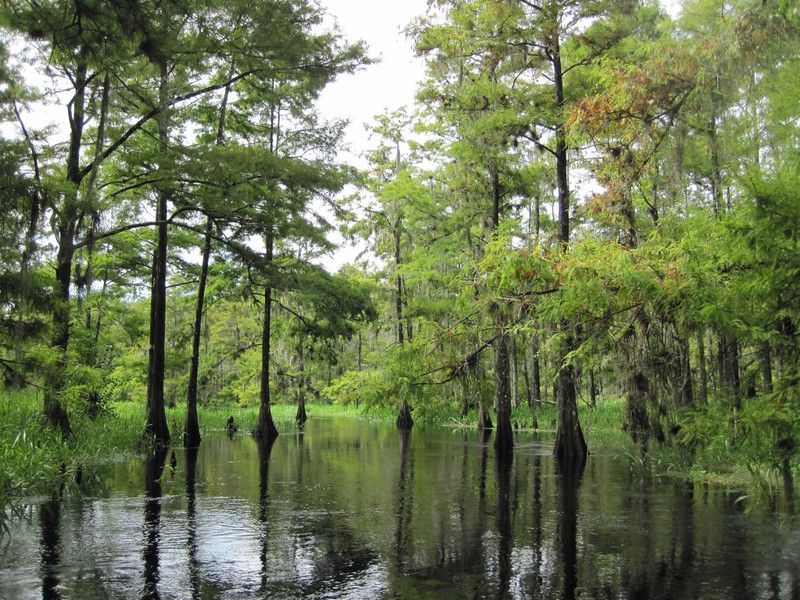 Drifting along, peacefully, listening to the birds all around 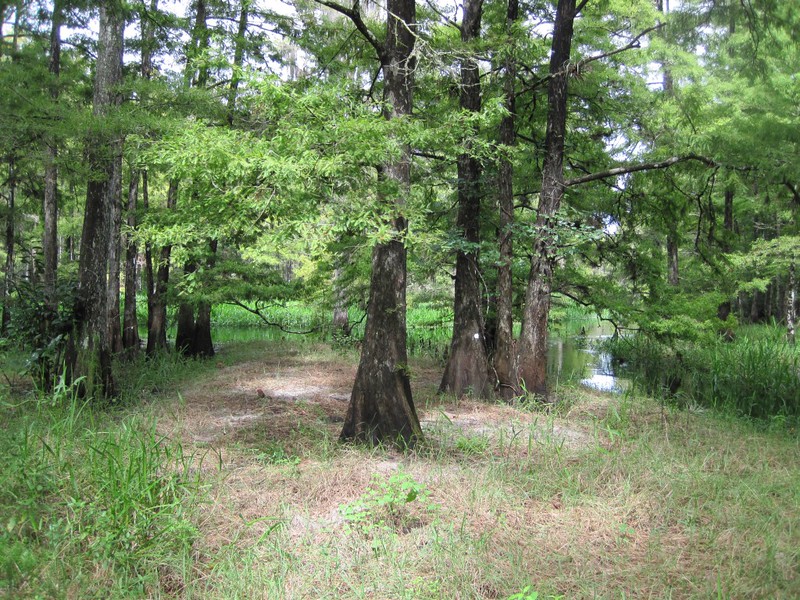 We found a small island with actual dirt, so we stopped for a break, to stretch our legs and eat some snack. 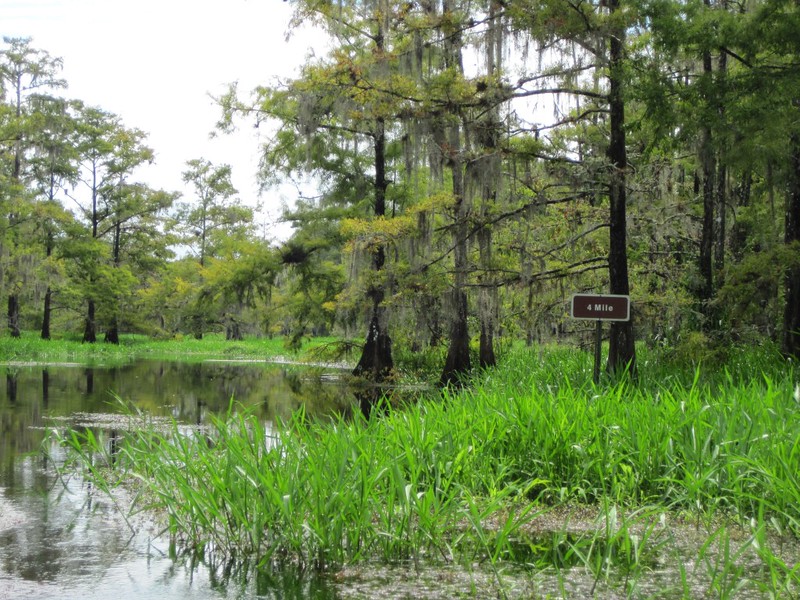 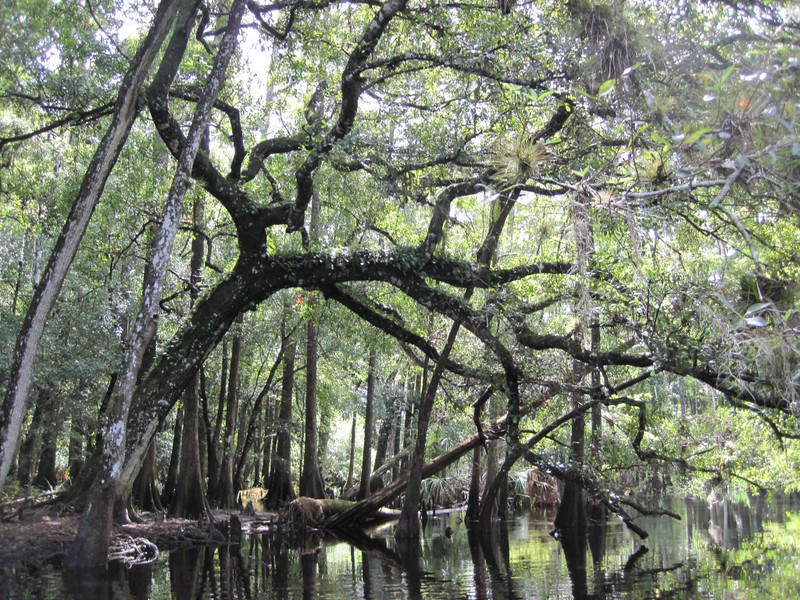 An island with what I believe is a large oak tree, whose branches arched over the creek. 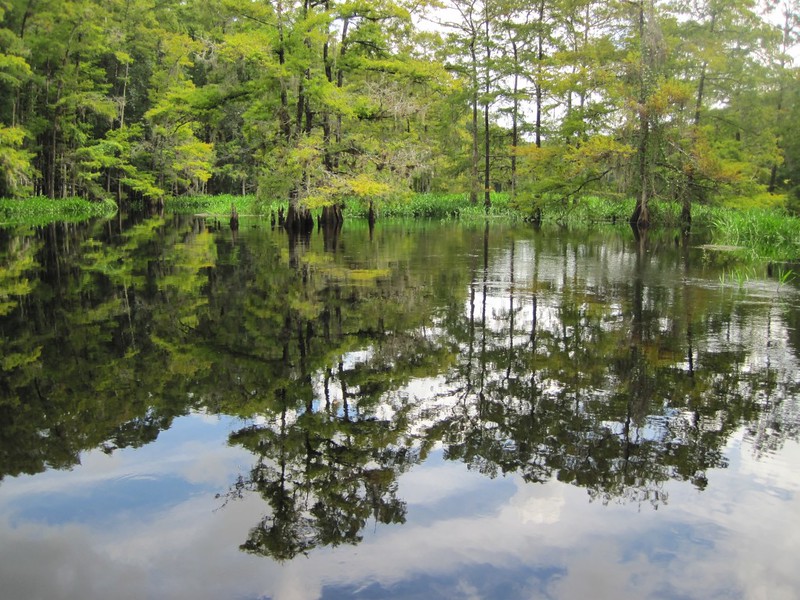 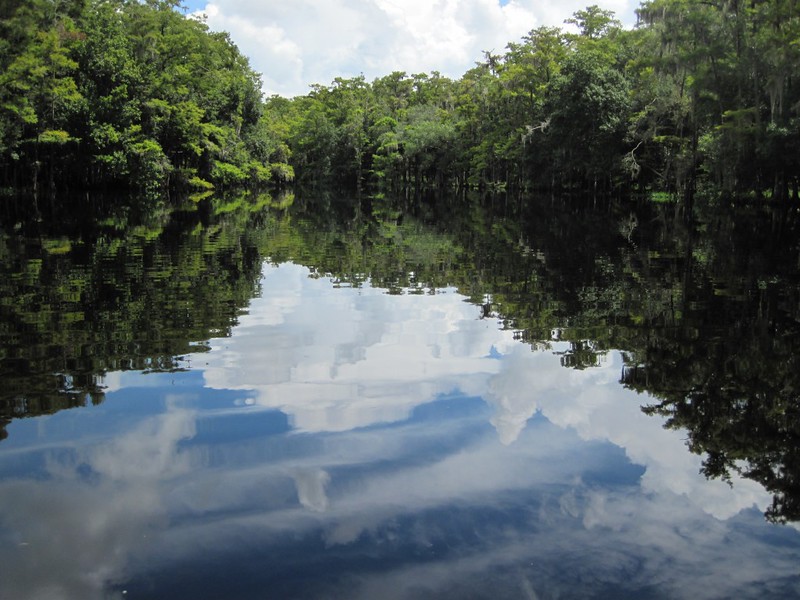 It was getting a bit late for lunch, but we realized that if we didn’t stop soon we’d be back at the outpost before we knew it.  So we pulled the canoe out onto the next solid piece of land we saw.  There were oaks and palm trees here, with a comfortable selection of shady areas for our convenience.  We broke out the cooler and ate our lunch, complete with cold drinks.  Yet another good reason to journey by canoe!

Interestingly, I had been worried about Florida’s well-known propensity to harbor zillions of mosquitoes, and as yet there had been very few around.  Usually they hide when it’s windy, but the air was dead calm in here, and there were only a few.  I was pleasantly surprised.

The main excitement of our lunch break was the sudden arrival of motorboats.  We heard them coming from quite far away.  And they were all shallow-draft boats, with small outboard motors, but they were pretty fast for such a narrow waterway.  The folks on them seemed to be having plenty of fun, and that’s a fact.

After lunch, we met a group of kayaks paddling upstream.  The kids appeared to be struggling, but their adult leader claimed that they were having a great time.  We didn’t want to argue, and simply sat there, paddles resting in our laps, drifting past them quite happily.  Let’s face it: Downstream is the only way to go. 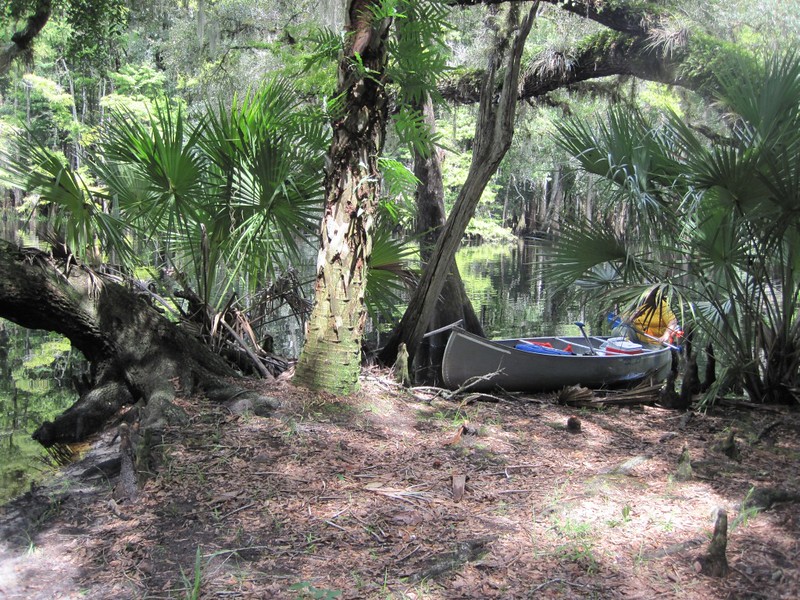 We beached the canoe on solid ground and ate some lunch 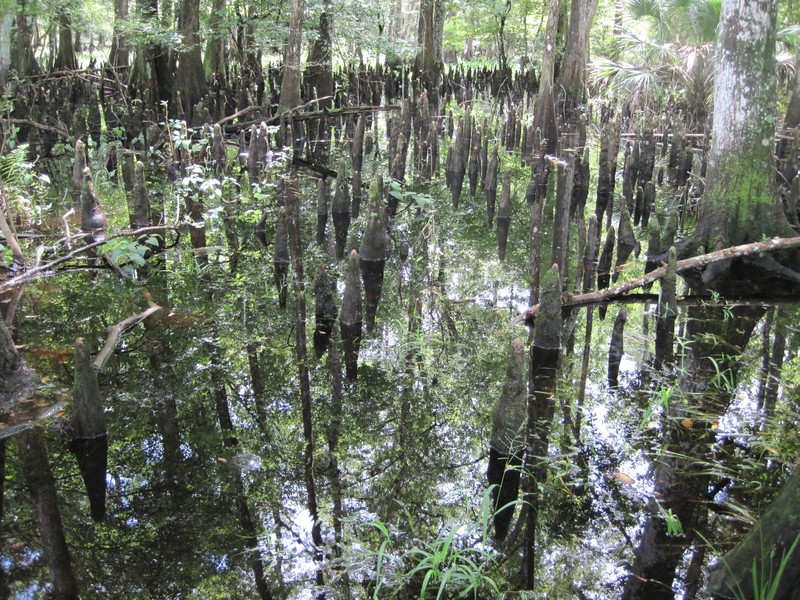 Cypress “knees” sticking up out of the still water. 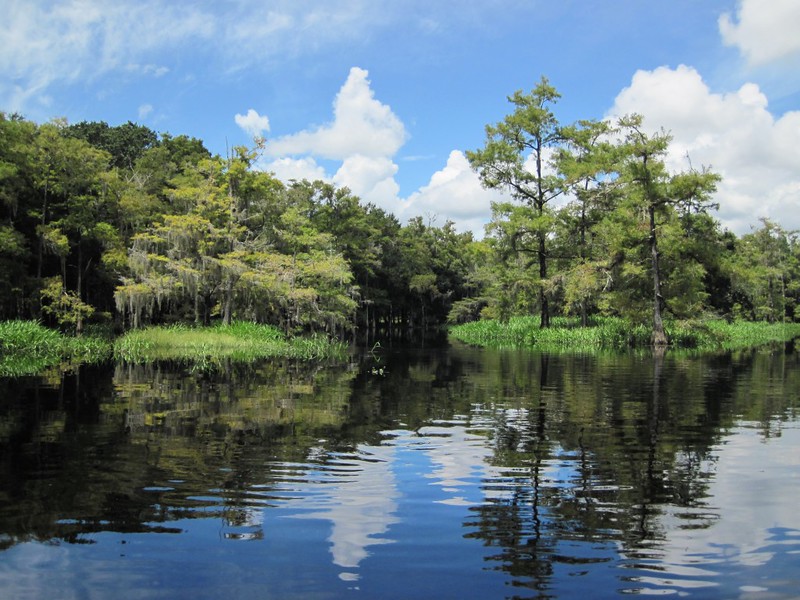 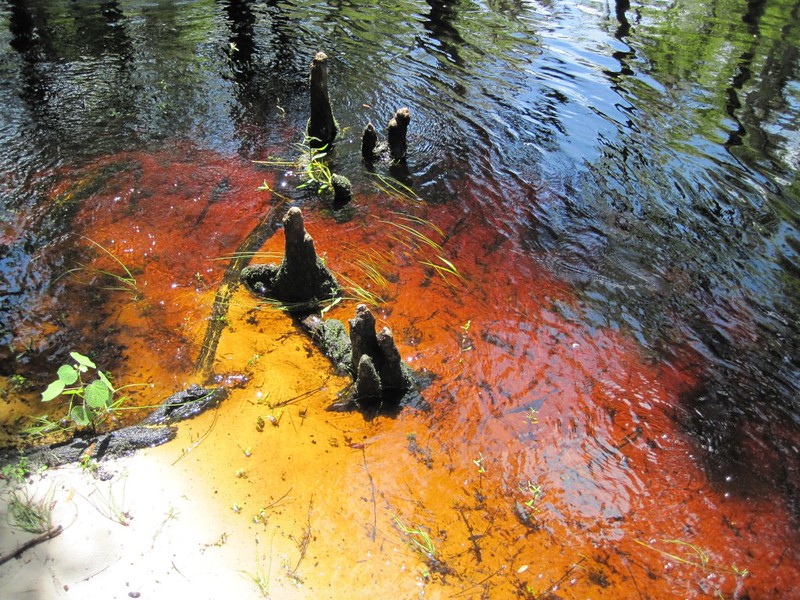 White sand beach at our lunch-island show the true color of the creek’s water: Deeply tannin-stained 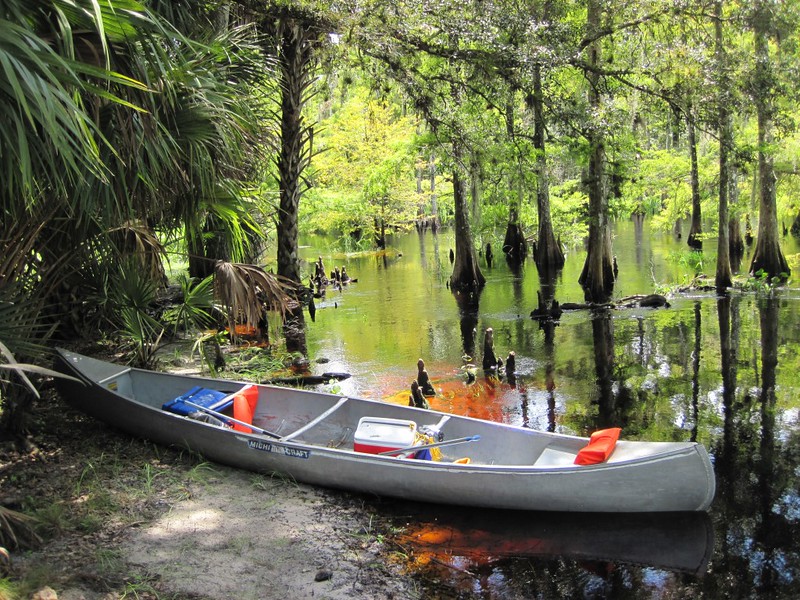 Our beached canoe, complete with lunch in the cooler

Video of three small motorboats having fun on the creek 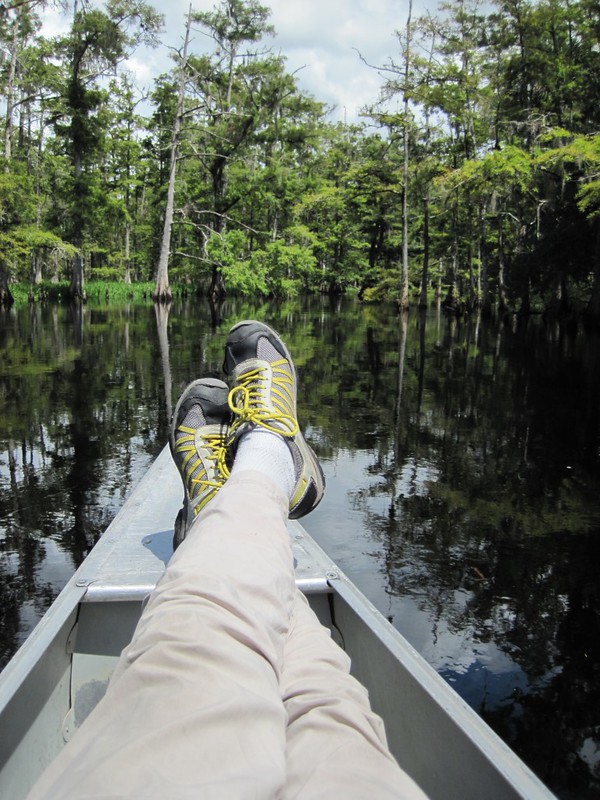 Row, row, row your boat, gently down the stream… 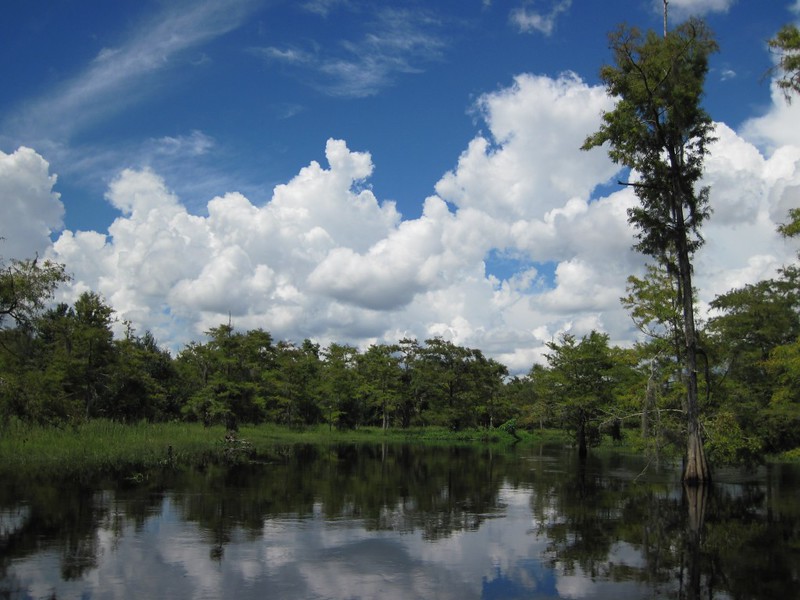 The creek gets wide and the current slows, but we don’t care because it’s beautiful 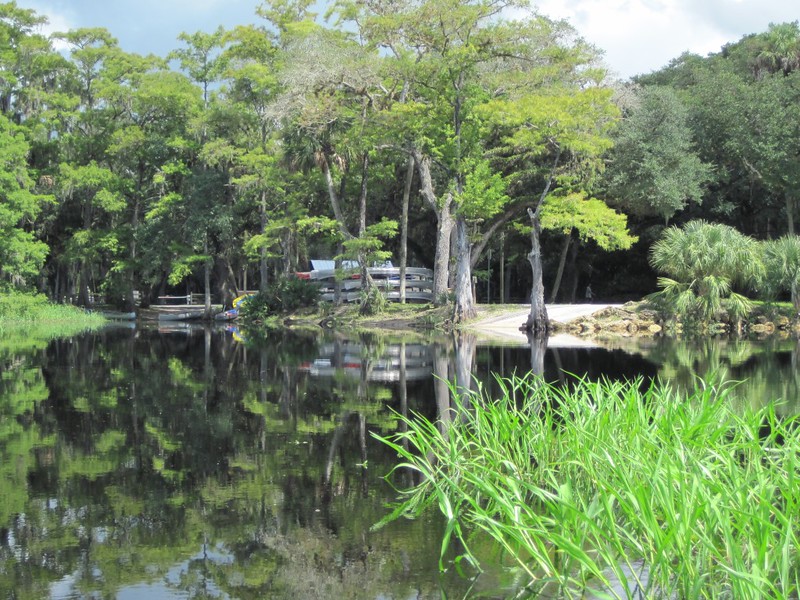 We arrive back at the Fisheating Creek Outpost. Time to return our canoe!

Eventually we arrived at Picnic Lake, and the current stopped completely.  At that point we truly had to paddle.  There were people walking along shore.  Others were fishing.  Children’s voices rang in the air.  There was no doubt:  We were back in civilization.  And the long, hard day of drifting downstream was finished.

For more photos and videos check out my Flickr Page.

For a map showing our GPS track see my CalTopo Page.