We purposely woke up a bit late at our camp on Big Flat/Miller Flat and took our time getting ready, as the next section of the trail was through a high-tide-inaccessible zone.  According to our charts, the tide was on its way out, so all we had to do was sleep in and eat a leisurely breakfast.  Plus, we only had 3.4 miles to hike that day, so why rush? 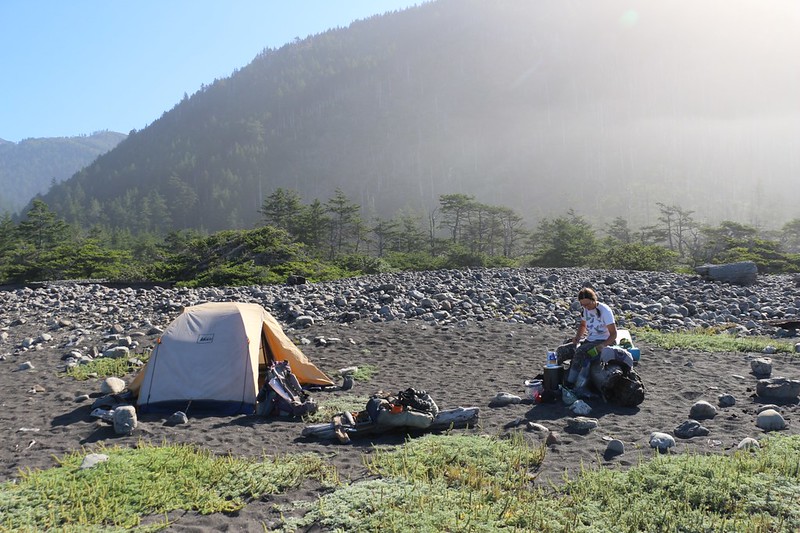 We didn’t have very far to hike that day, so we slept late and enjoyed the morning

While Vicki was boiling some water, I headed down to the beach to get yet another video of the stones knocking in the waves.  Very cool.  Then we ate breakfast and finished packing in a leisurely way.  After checking the camp for forgotten items, we donned our backpacks and started hiking.  It was 10am when we left.  We were total Slackers!

Panorama video of waves breaking and rocks knocking in the morning, at Miller Flat 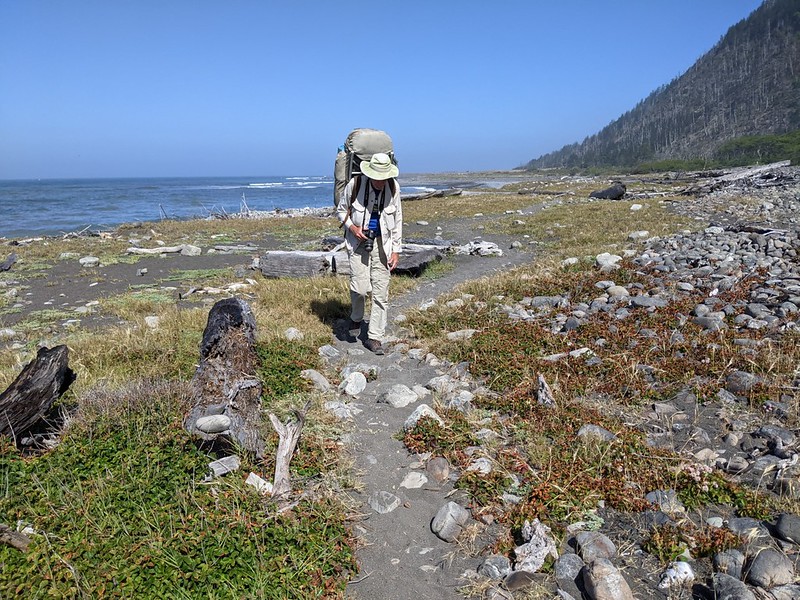 Me, hiking in the bright morning sun, with Miller Flat and Big Flat to the north

The trail stayed up on Miller Flat for the first half mile or so.  This was good, as the beach with all the knocking rocks had a very steep slope made of unstable rocks.  We didn’t want to go there!  We hiked along the plain and checked out the small, grassy airstrip.  There was a yurt-like structure up on the hillside, and we figured that the folks who owned it arrived and departed via this route.

The flat plain ended when it intersected the steep hillside, and there was a sign directing us to a small trail that led down a sheer bluff to the beach.  While we were on our way down, I looked to the south and saw an airplane approaching.  It was headed directly for the airstrip!  I started to run back up the trail but I was too slow.  I managed to get a photo of the small plane coming in over the bluff, and then another one after it landed.  It was an extremely light aircraft.  I like airplanes, and that really made my day. 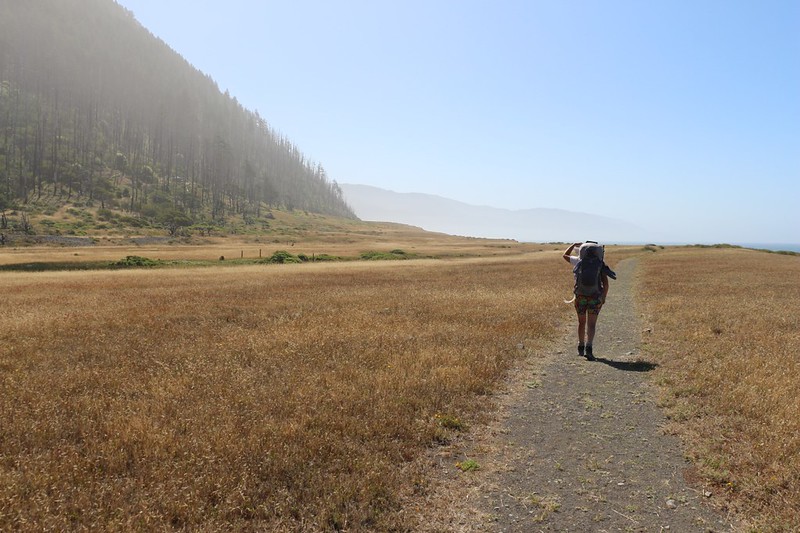 Heading south on Miller Flat toward private land and an airstrip, where the trail had to head down to the beach again 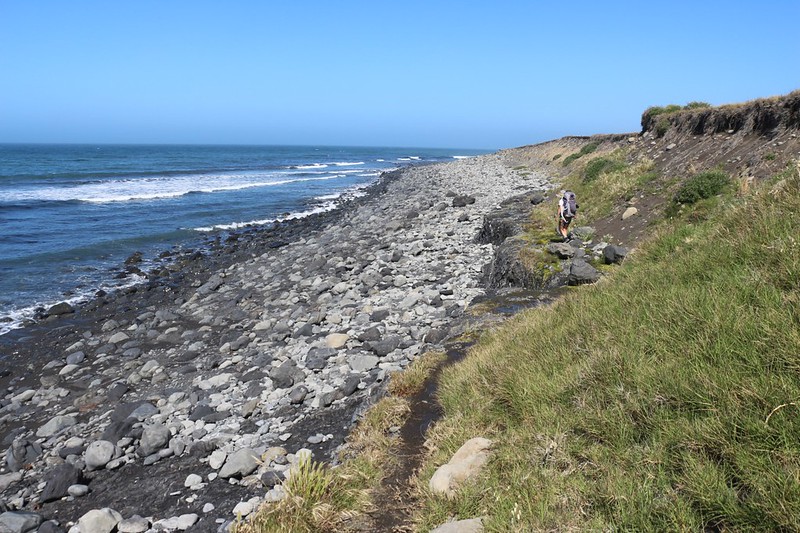 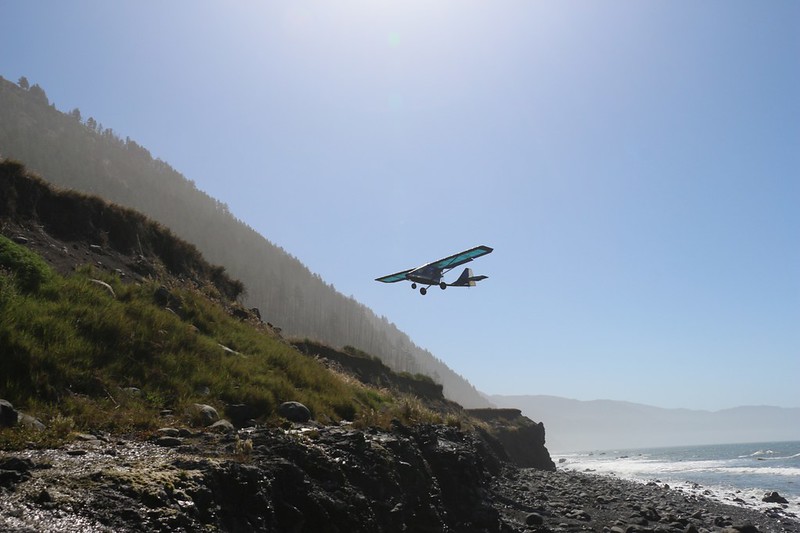 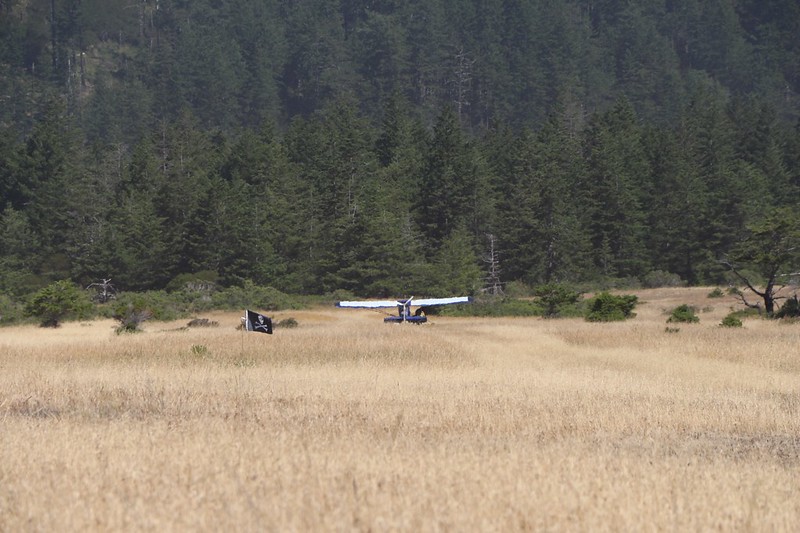 Once we were down on the beach, it was easy to see why this section would be impossible to hike during high tide.  Rock cliffs lined the shore, and the obvious high tide line was all the way up by the rock.  And if there happened to be large waves occurring at the time, then even the “only hike when tides are below 2.5 feet” rule might not be good enough.  This was when we were glad that we’d planned the dates of our trip so carefully.  Every day had a low enough tide during the middle part of daylight hours.  Just the same, I’ll bet that there have been folks who’ve hiked this part during nighttime hours.  With calm seas and a full moon, it might even be fun! 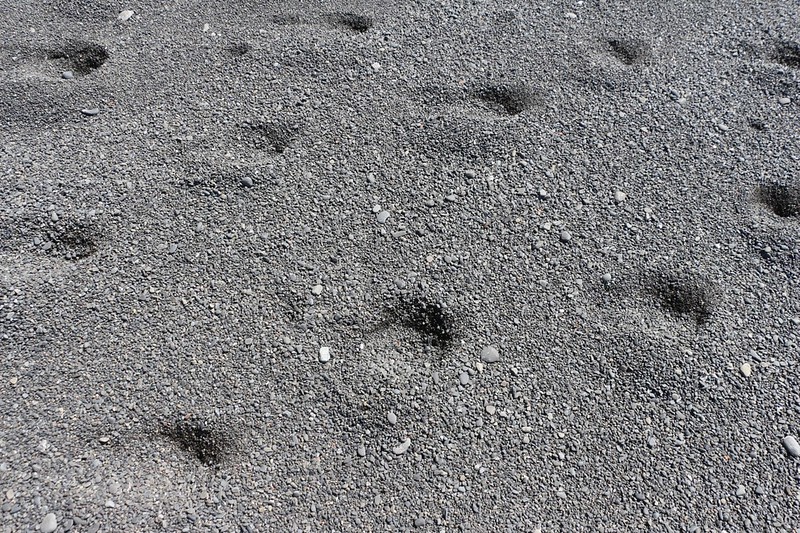 The gravel beach made hiking difficult, as our feet sank down into the shifting pebbles on every step 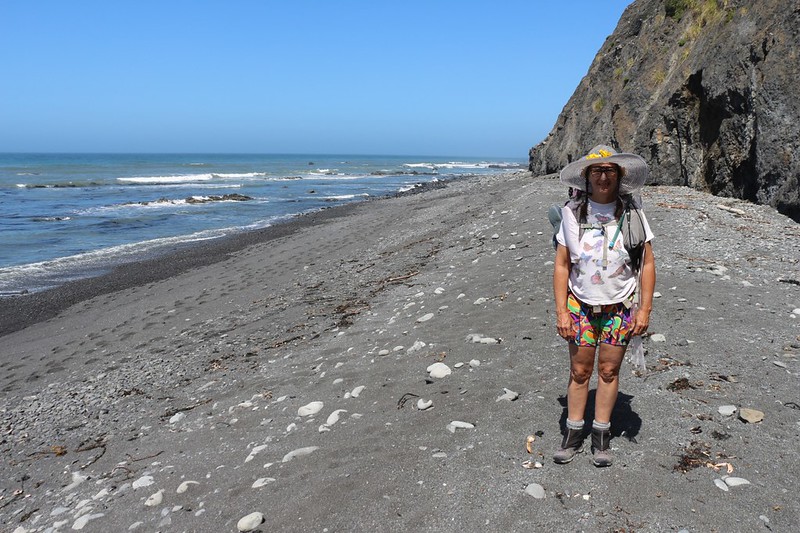 We had to slog along this stretch of beach no matter what, so we opted to slog on the flat spot near the cliff

The weren’t many boulder fields along this strip of beach, but there was plenty of soft gravel, which made for slow trudging.  But that was offset by the wildlife that we spotted along the way:  Pelicans, cormorants, and the ubiquitous seagulls.  Plus plenty of miscellaneous kelp, seaweed, mussels, and crab shells. 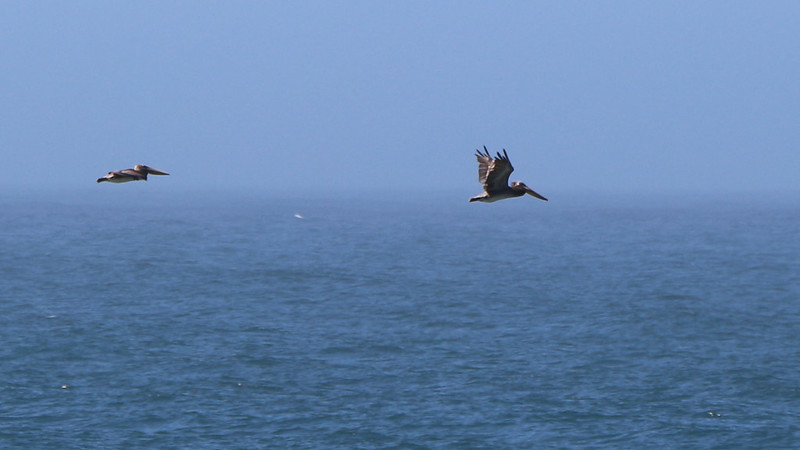 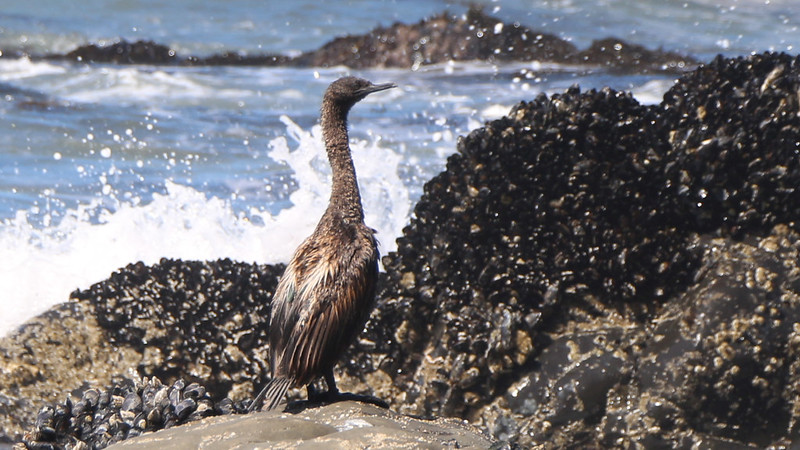 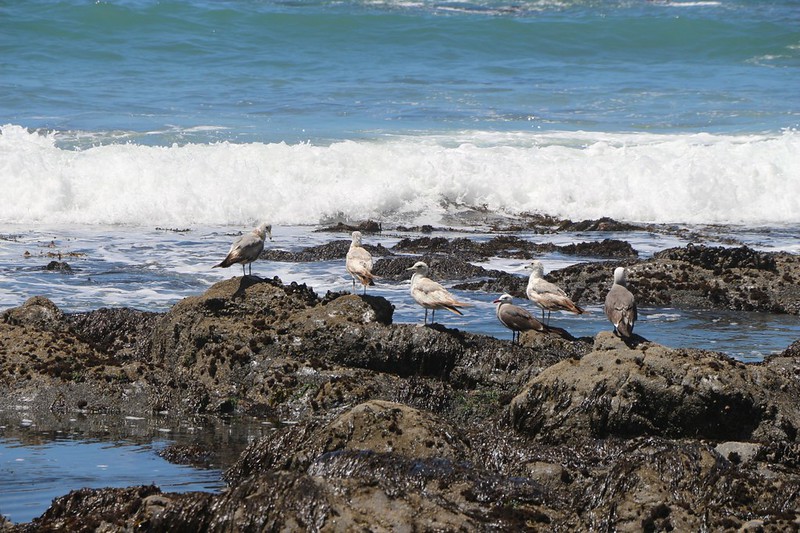 The heat wave still hadn’t broken completely, but we discovered a way to counteract it when we found a small waterfall along the rocky cliffside.  Vicki and both doused our heads under the cool fresh water, and felt better immediately.

A short while later, we came to Shipman Creek, the halfway point of the day’s hike.  There were several campsites above the tide near the creek, and we opted to stop for a break.  We took our boots off and relaxed on a large driftwood log.  Not many people camped at this spot, due to its location within the impassable zone.  But that might also be a good reason to stay there.  In fact, our destination at Buck Creek was also situated within the same zone, and if we were lucky it would be fairly empty.  Or at least we’d know that no more people would be able to arrive once the tide got high enough. 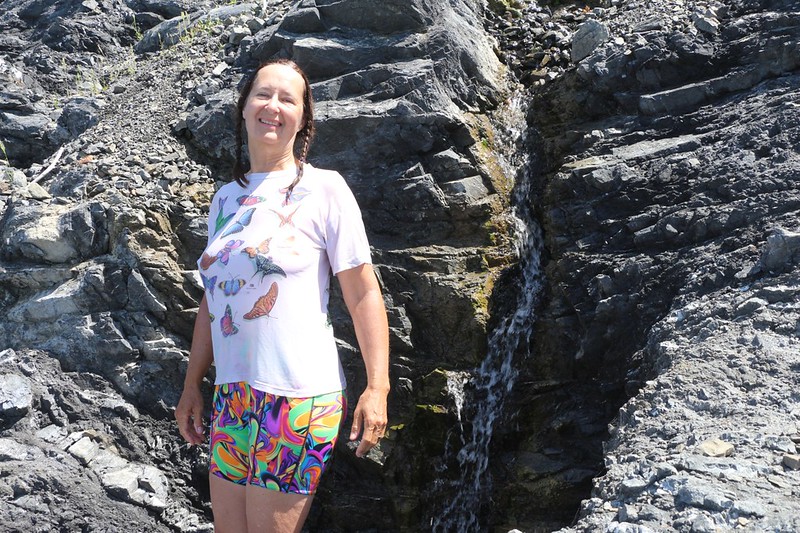 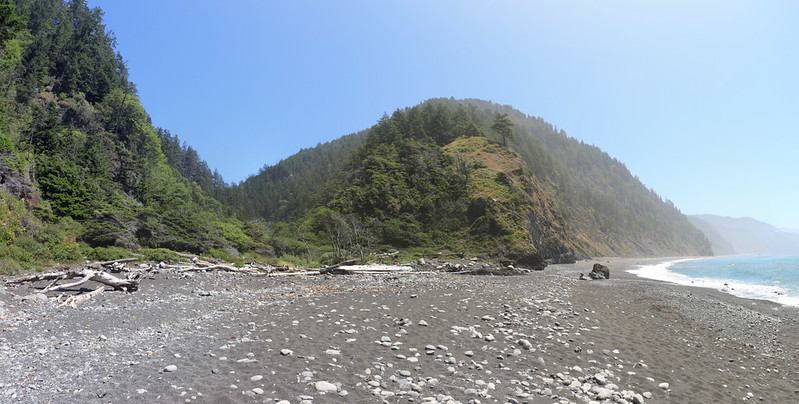 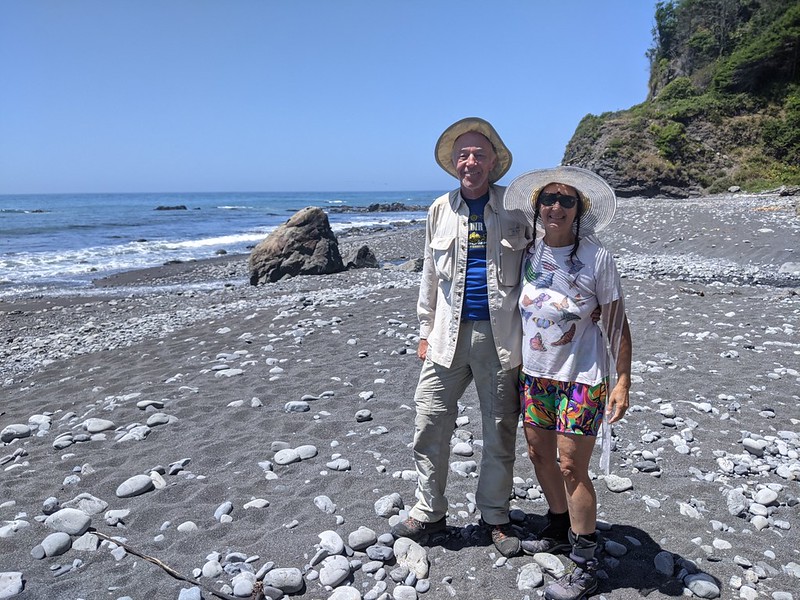 We had less than a mile and a half to hike in order to reach Buck Creek, and the distance went by quickly, even though we were still hiking at our usual slow pace.  We checked out the tidepools, and the seals, as well as another unnamed creek.  It was a beautiful day to be hiking on the beach. 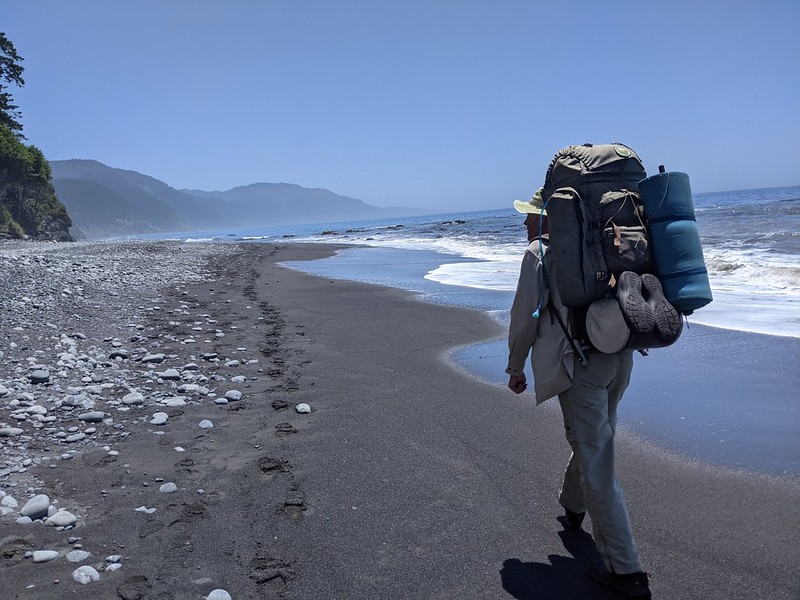 Me, hiking along on the firmer wet sand near the low-tide line – but you have to be ready to jump! 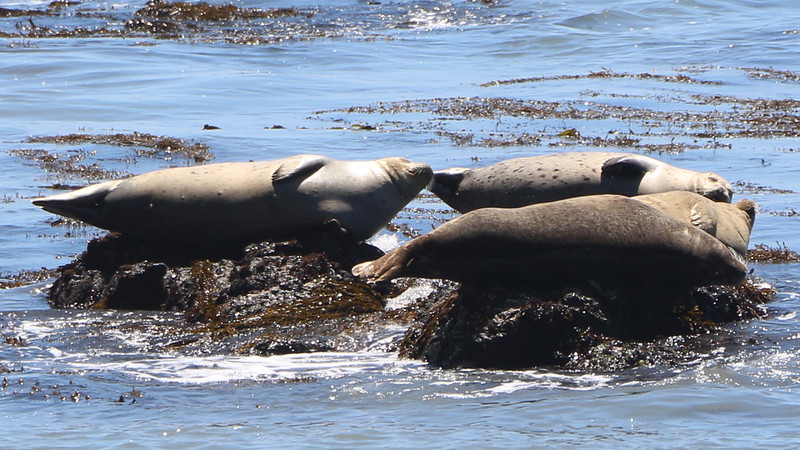 Plump pinnipeds posing on rounded rocks, basking in the sun on a rare warm day on the Lost Coast Trail

Looking north from an unnamed creek southwest of Fire Hill, near the undersea Delgada Canyon

We arrived at Buck Creek before we knew it.  I even had to check my GPS to make sure that this was the right spot.  And it looked interesting.  My LCT mapping app mentioned that there were spots on the deep sand above the high tide line, but it also mentioned spots up the hill, inland from the beach.  We already noticed one tent up on a ledge, and several people hanging around near the creek.  Our dreams of privacy were bashed.  This place was already crowded, and it was still early afternoon!

So we put our backpacks down on the sand where we might be able to camp, and climbed up the path to see what else was available.  The best we could find was a semi-flat spot with a view out over the water, but it wasn’t very far from the main path.  Oh well.  At least it had a nice wooden bench for us to sit on.  It was also surrounded by poison oak bushes, but we figured that we’d simply have to be careful to watch our step.  The reason nobody was camping there was that some fool had dug out a big hole in the middle of the site for a campfire, in the exact spot where a tent would fit.  Totally annoying.  Our solution was to make a number of trips up and down the hill, carrying sand in two very large plastic bags, until we’d smoothed out the hole and made it flat again.  Then we set up the tent.  Perfect! 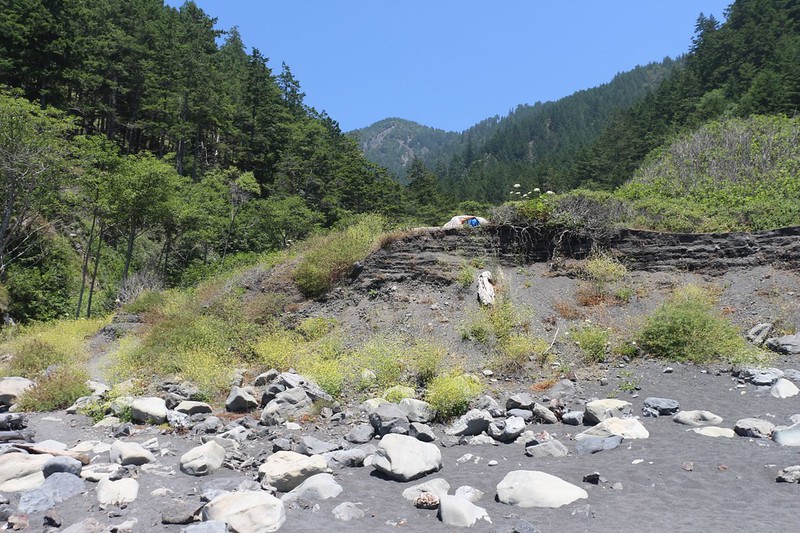 We arrived at the Buck Creek campground and discovered a lot of campers already in residence – busy!

View north along the coast from Buck Creek

Video of a peaceful afternoon with flowers waving gently, up in our campsite at Buck Creek 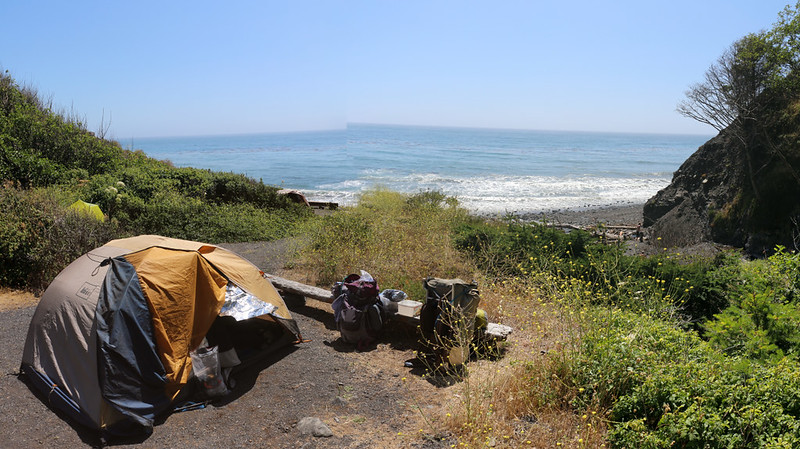 Most of the campsites at Buck Creek were inland, up in the gorge, and offered fine views of the ocean

We spent the rest of our lazy afternoon eating lunch, taking a nap in the tent, reading our books, and filtering some drinking water.  We also spent the dinner hour meeting the neighbors down on the beach.  Everybody was having a good time, telling stories about backpacking, and letting each other know about other great places to visit.  They were a good crowd.

The tide came in as the afternoon waned, and soon our campground was cut off from the world.  The highest waves were washing up all the way to the cliffs.  This posed a bit of a problem when it came to going to the bathroom.  The rules said to bury your waste within the tidal zone, on the wave slope.  The easy way to do that was to go to the bathroom directly in front of everyone in camp, which wasn’t really an option.  We noticed that there were a couple of hidden alcoves in the cliffs to the south, and if you timed it right, you could dash down the beach to an alcove before the next big wave came in.  Very tricky.  But we made it work, and our shoes stayed dry. 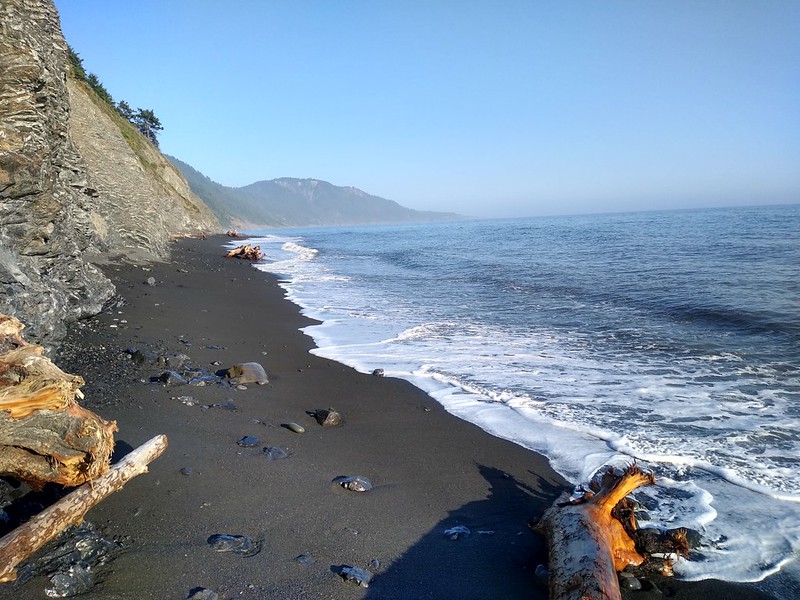 Buck Creek is within the high-tide-impassable zone, as we discovered that afternoon – we were trapped for the night! 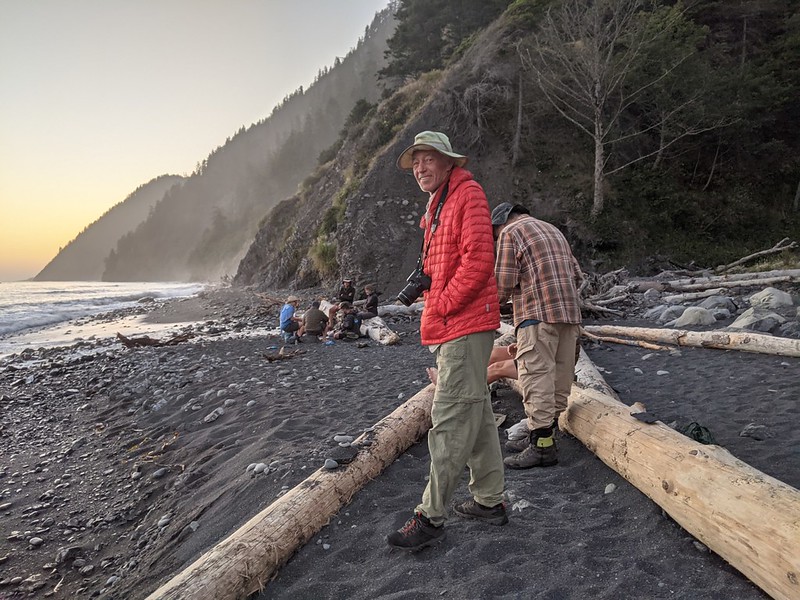 Waves breaking on the beach at sunset 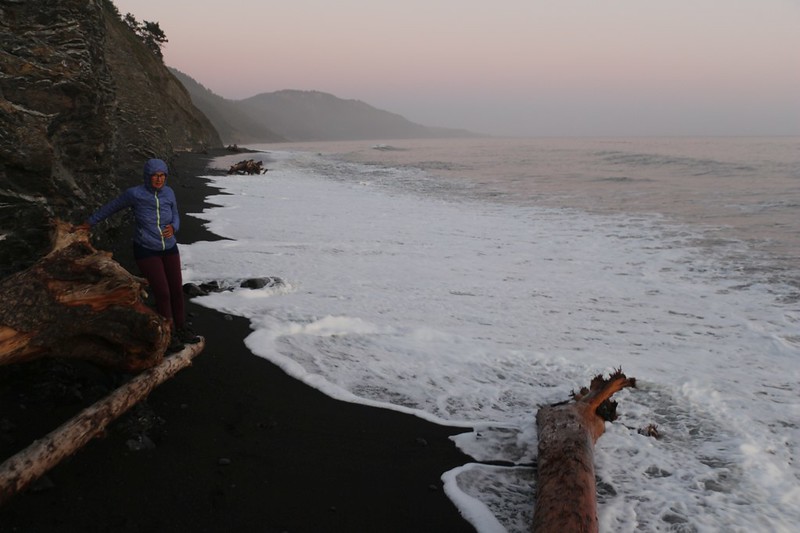 Vicki had to time her dash carefully at high tide, in order to go to the bathroom on the wave slope as the rules required

We cleaned up from dinner and simply hung out on the driftwood logs watching the sun go down.  The waves rolled in and the sky grew orange.  The air got much cooler.  We got a bit of cell phone signal and checked the weather.  Tomorrow would be much cooler, and we were relieved that the heat wave was broken.  But we had to admit that the sunny weather these last few days had been quite pleasant overall, and much better than a late-season rainstorm. 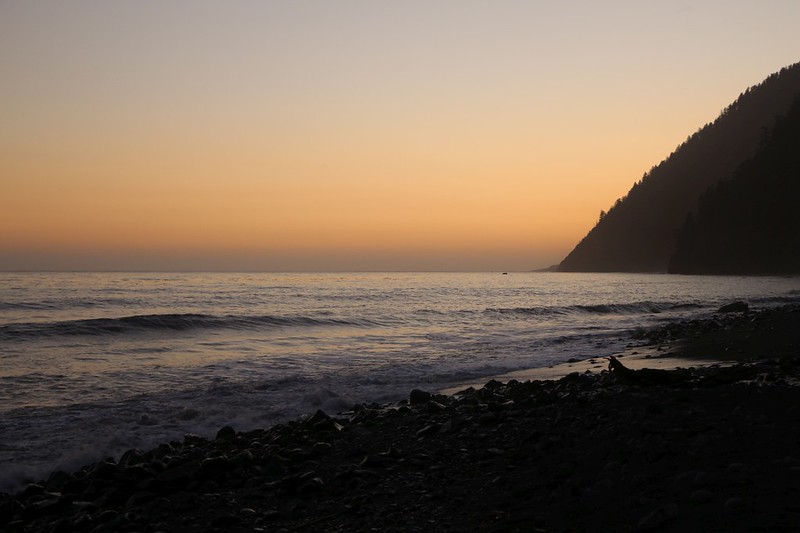 We went back to the tent and got out the map.  Our chart indicated that the tide wouldn’t be low enough to leave camp until later in the morning, so we made a plan to wake up early and climb up the ridge just south of Buck Creek.  There was an old road on the map that led to Saddle Mountain.  Maybe we could get some good views from up there.  Then we’d come back and finish packing up camp before continuing south along the beach.

We read our books for a while in the tent.  The ever-present sound of the surf was muted this far inland, but it was still loud enough to drown out the noises of our nearby neighbors.  Very peaceful.  We decided that we could really get used to this sort of lifestyle.