Well, it had been two years since our last bushwhack in the Catskills, as last year’s attempt in early September 2011 was called off due to the too-recent devastation of Hurricane Irene. When we got there this September, we saw that some of the washed-out bridges were still being repaired on Spruceton Road.

We got to the Spruceton Trail Parking Lot before midnight and crashed in the back of the van, hoping that we wouldn’t get in trouble for it. Luckily, nobody cared. We woke up about an hour before dawn (it was just getting light), ate some cold breakfast, and downed some caffeine. We had many miles of hiking ahead of us, much of it off-trail, and the days were getting shorter. On our last bushwhacking adventure, we barely made it out by dark.

Today our plan was to summit four peaks: Three of them were bushwhacks (two of those with canisters), three of them Catskill 3500 Club peaks, one of them over 4000 feet, and one that really wasn’t an official peak at all. 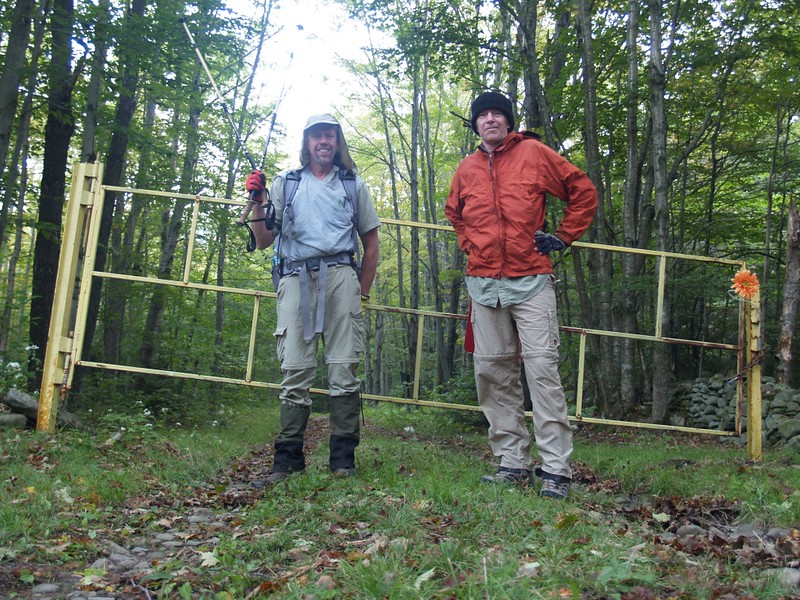 We hiked up the trail (actually a dirt/gravel road) until it made a sharp switchback. At this point we left the trail/road and the bushwhack to the summit of Rusk Mountain began. It was steep. The early part was made easier by hiking on the rocks of a dry streambed, but soon enough we were seriously climbing the steep mountainside, pushing through nettle and briar patches, climbing over downed trees and mossy boulders, and generally sweating our butts off. We’d started hiking at about 2100 feet elevation, and the summit of Rusk was 3680. There was a plateau on top which had several well-trodden “herd paths” which we then followed directly to the summit canister. We signed the summit register, snapped some photos, and took a break. We were making excellent time, and were now much less worried about getting back to the van before dark. This was Paul’s 24th Catskill 3500 peak, and his fourth bushwhack peak.

Video of Bushwhacking Up Rusk Mountain 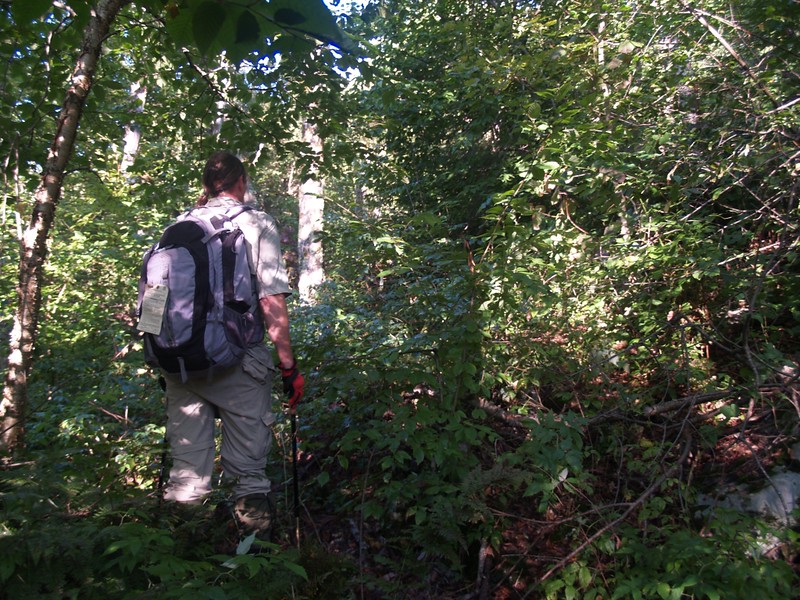 Pausing to Choose a Path While Bushwhacking Up Rusk Mountain; all paths look difficult! 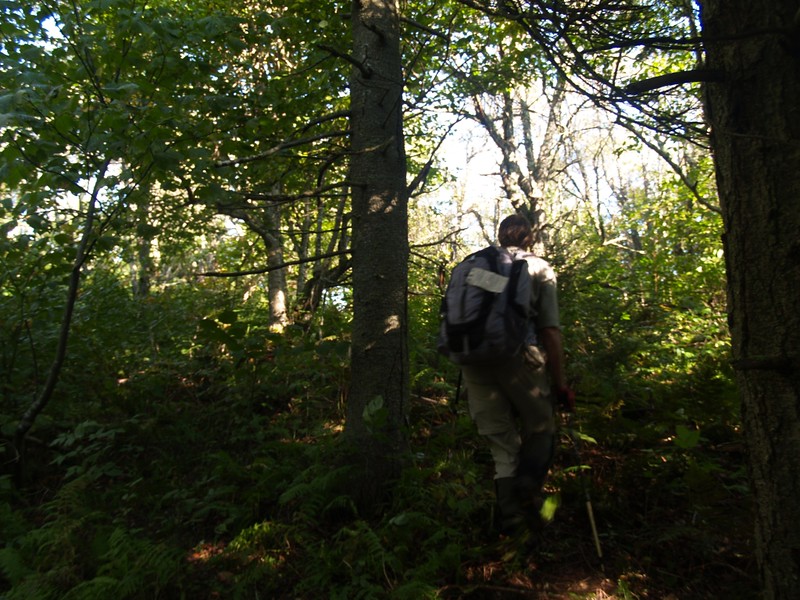 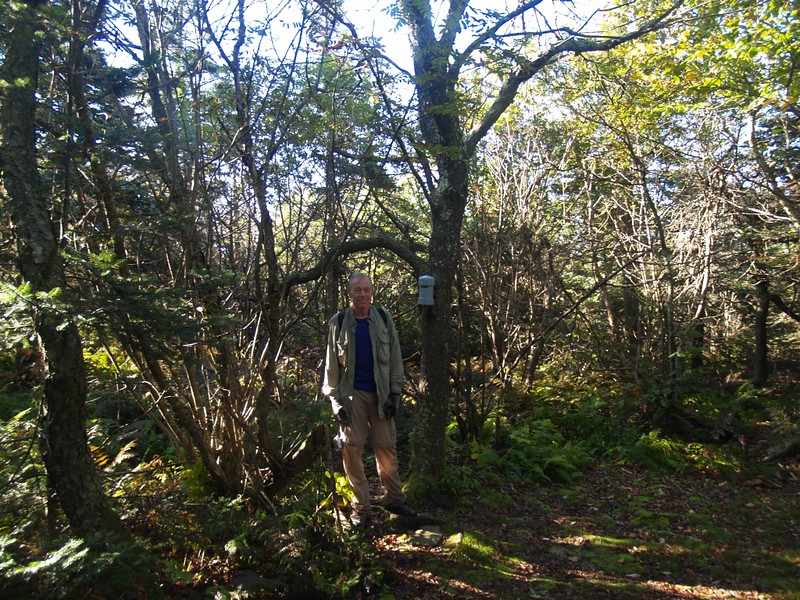 Me on the Summit of Rusk Mountain with the Canister

Rather than go all the way back down the way we came, we decided to traverse east along the ridge toward East Rusk. There were some decent herd paths that came and went, and the going was fairly easy. Eventually we came upon a boulder that was on the top of a rise, and decided to call it the summit block. Actually, East Rusk doesn’t have enough prominence to be considered a “real” peak, but we bagged it just the same. Then we continued bushwhacking ever-downward along the ridge until we reached the Spruceton Trail at the saddle between Hunter and Rusk Mountains. Back on the trail, the bulk of our bushwhacking was over, and it felt good. We knew that we’d have plenty of time to finish our loop hike. 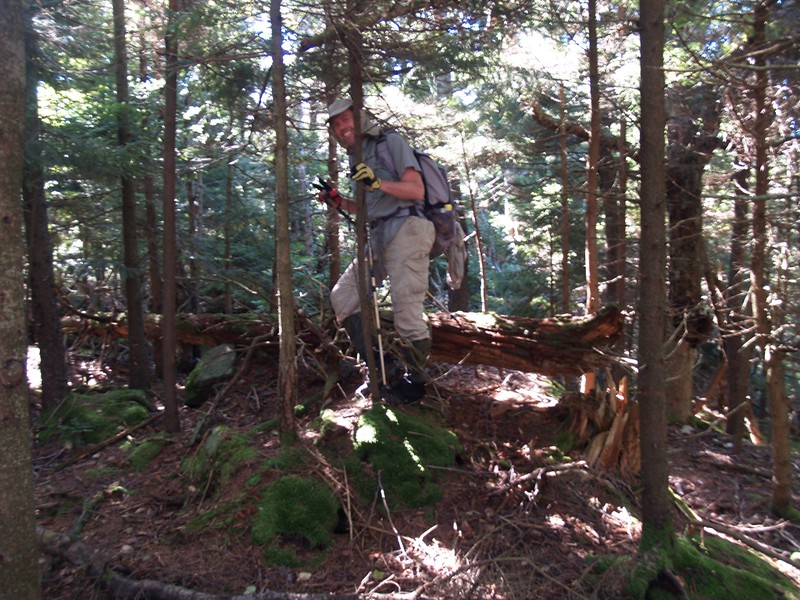 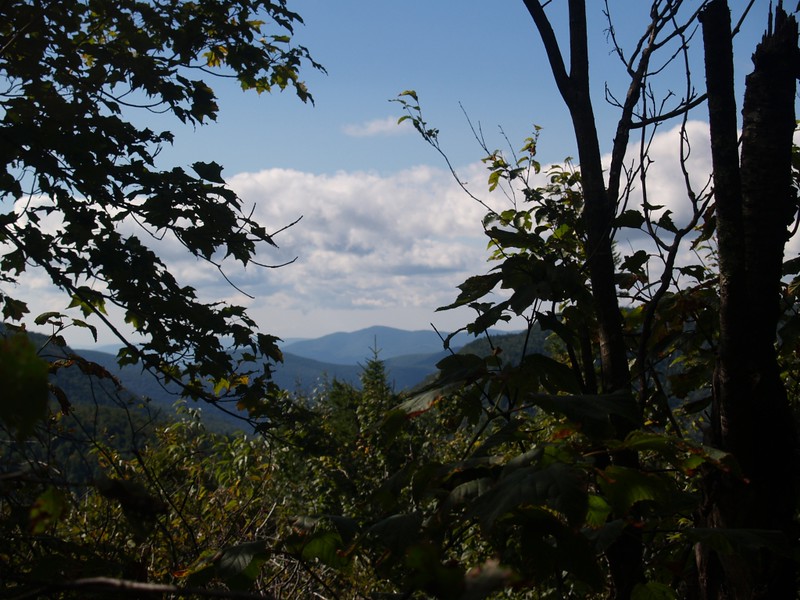 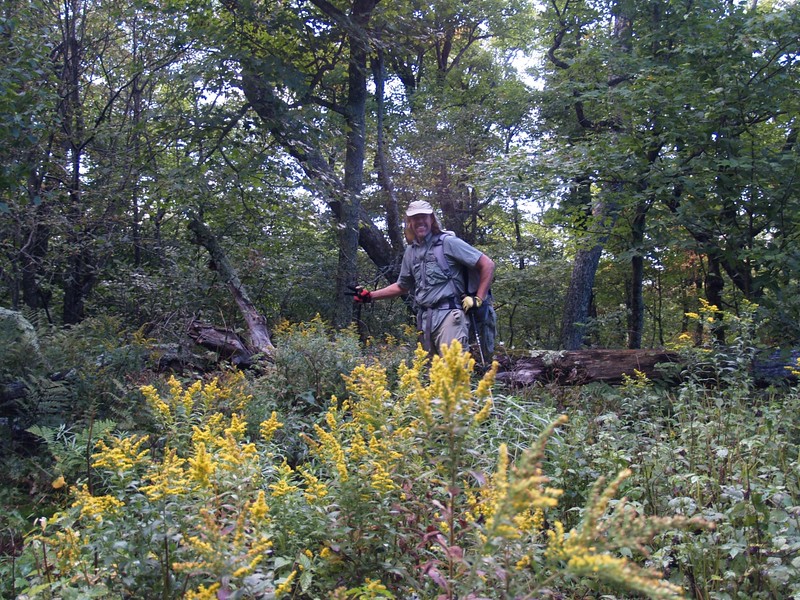 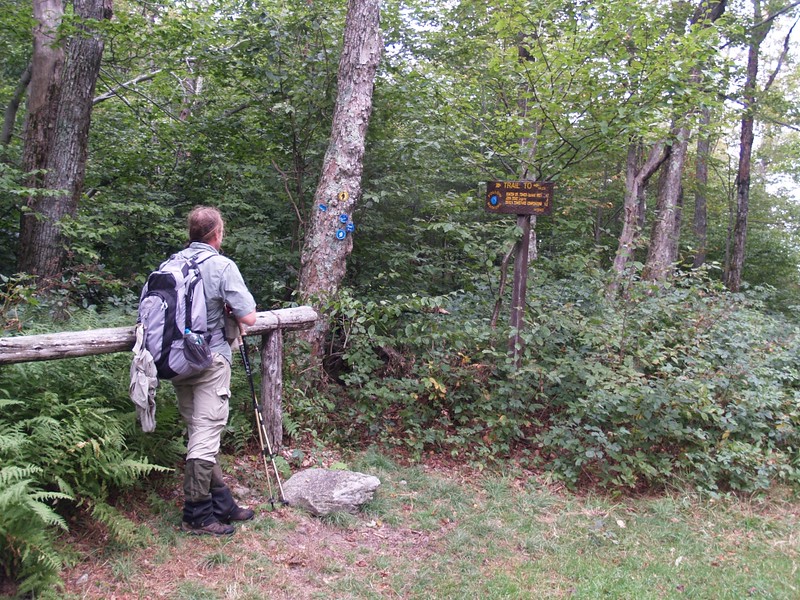 And then it was time to climb once again. To Hunter Mountain, the second-highest peak in the Catskills, that is. But along the way we were happy to check out a nice spring (I filled both of my now-empty liter bottles here) and to admire the newly rebuilt John Robb Lean-To. What a nice place to camp! It had a great view down the valley of the West Kill, and some impressive outcroppings to relax on in the sun. 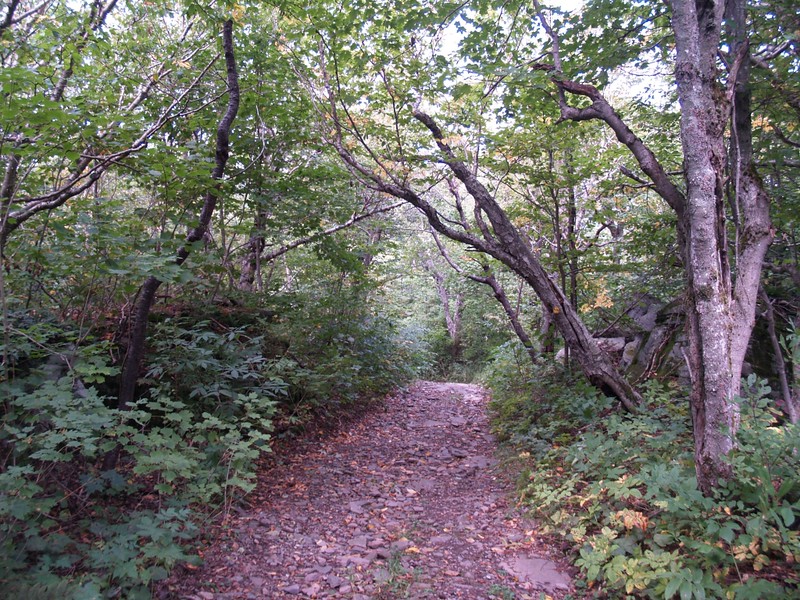 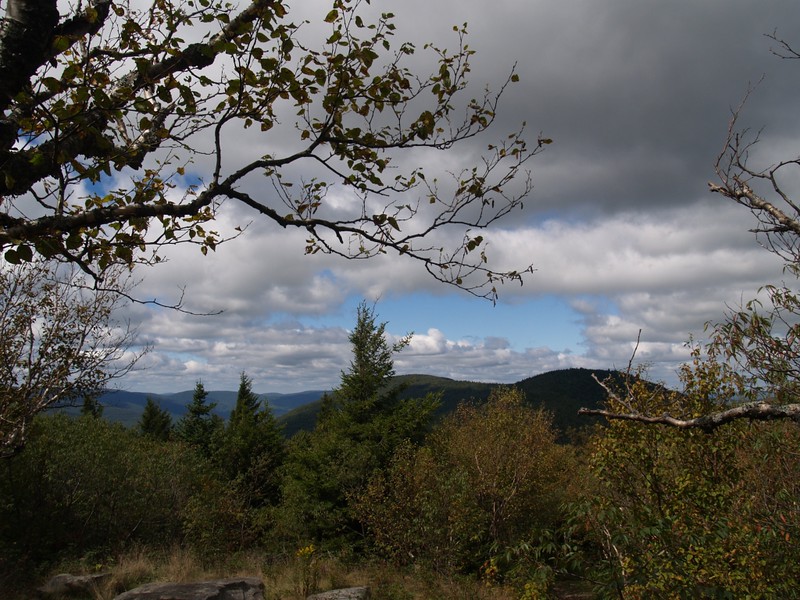 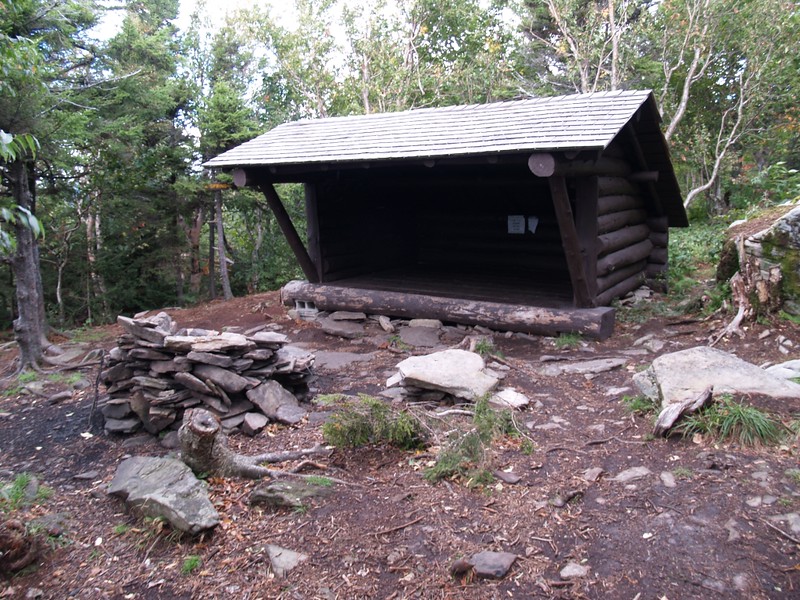 The John Robb Lean-to on the Spruceton Trail 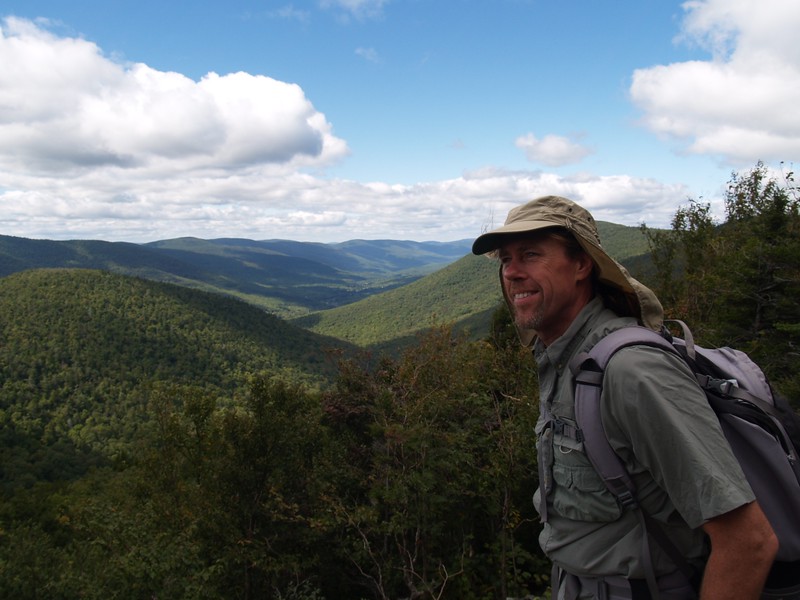 View from the Overlook at the John Robb Lean-to

The peak of Hunter Mountain had a cabin and a fire tower. Being a Monday after Labor Day, there was no one on duty. This was also where we met the first and only person we’d see all day, and he only stayed on the peak for a minute. After that, we climbed as far as we could up the fire tower stairs (the room on top was locked). The wind was amazingly strong up there. The temperature on the summit was 55 degrees (measured on a thermometer on the cabin’s porch) and the tower-wind really cut through our clothing, so we couldn’t stay up there long. We went back down to the cabin and ate a light lunch. 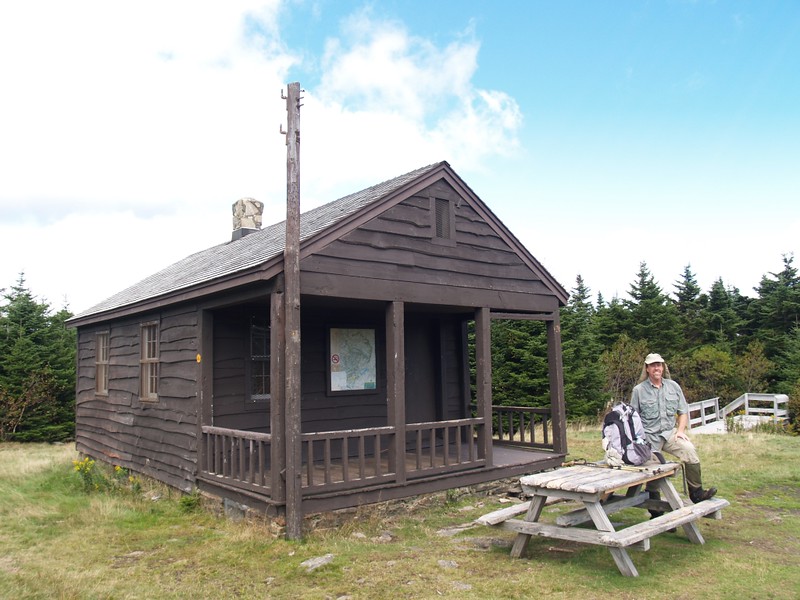 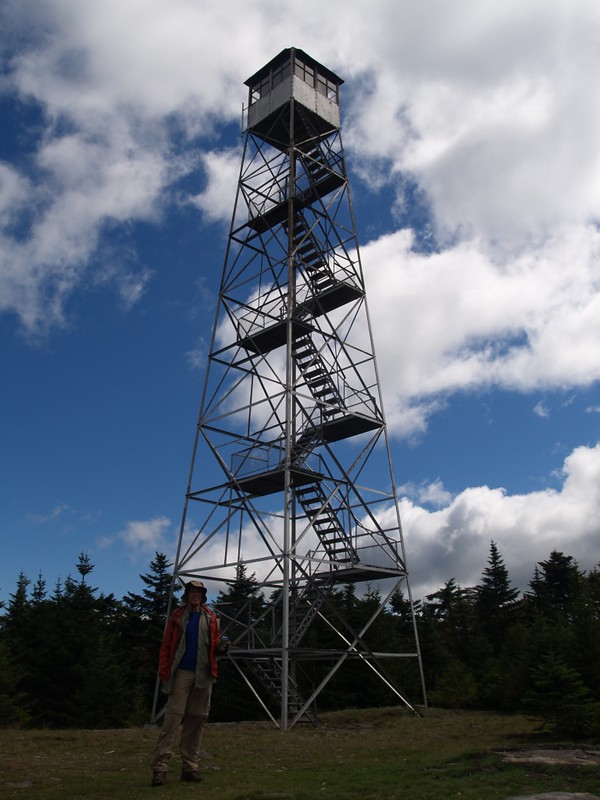 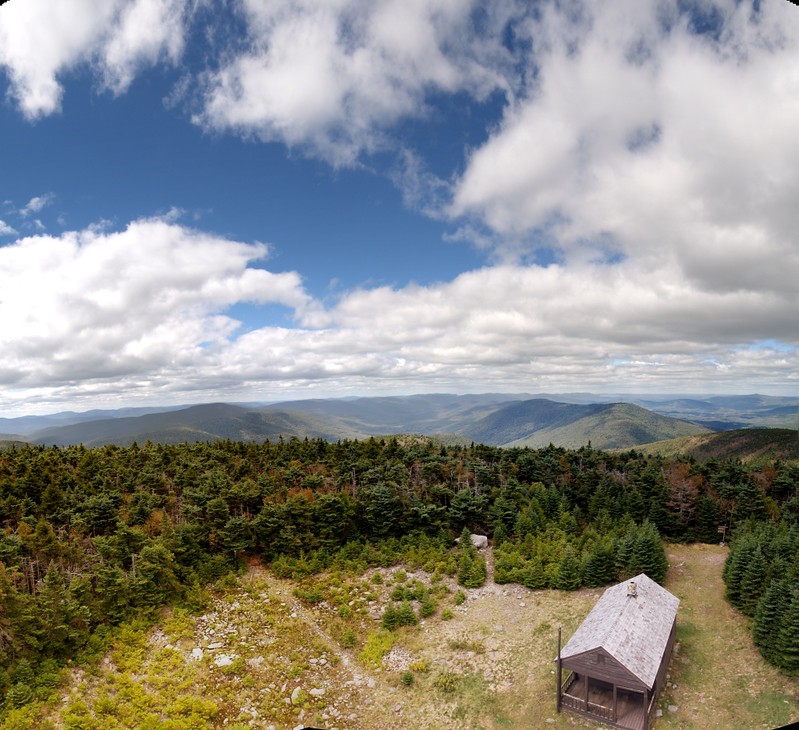 Then it was off to Southwest Hunter Mountain. We followed the trail toward the junction with Devil’s Path. We checked out the Devil’s Acre Lean-To (pretty nice, but not as great of a view as the John Robb Lean-To had). We found the so-called “bushwhack” path along the old railroad bed that was marked with a stone cairn. Easy hiking. Another cairn marked the final path to the summit and the canister. Our fourth peak of the day and Paul’s 25th Catskill 3500 summit. He’s getting really close now. Me? I’ve got a long way to go to bag all 35, and living in California isn’t making it any easier… 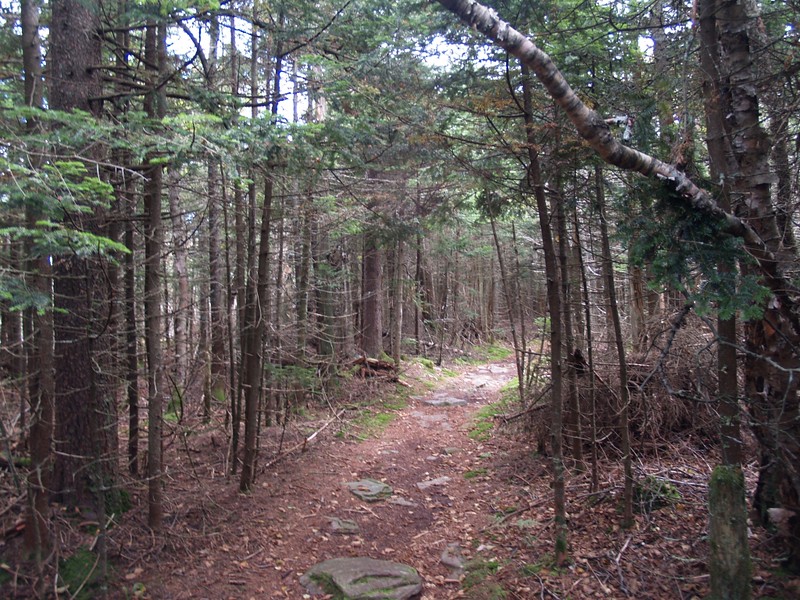 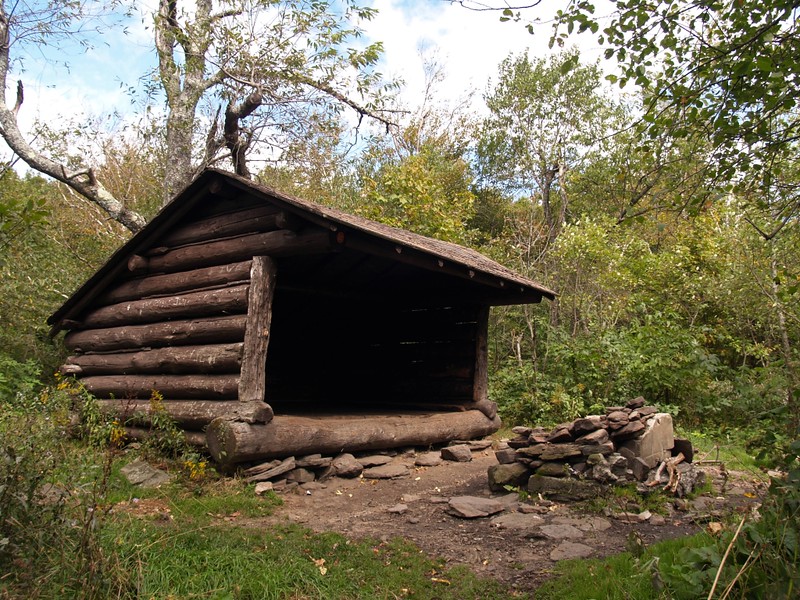 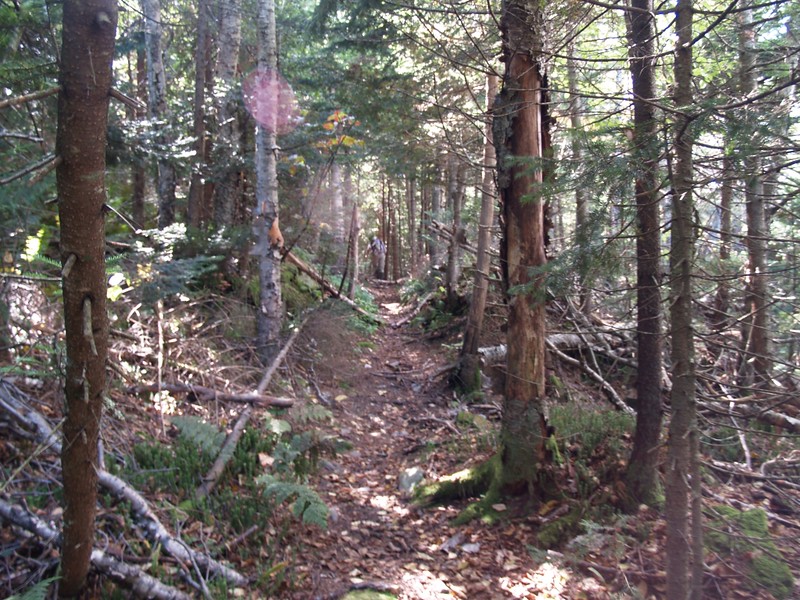 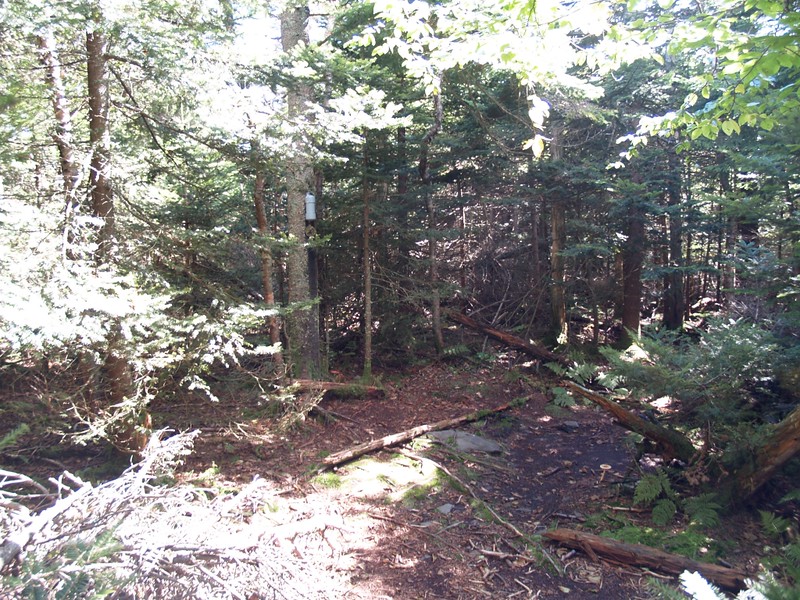 Summit of Southwest Hunter Mountain and the canister 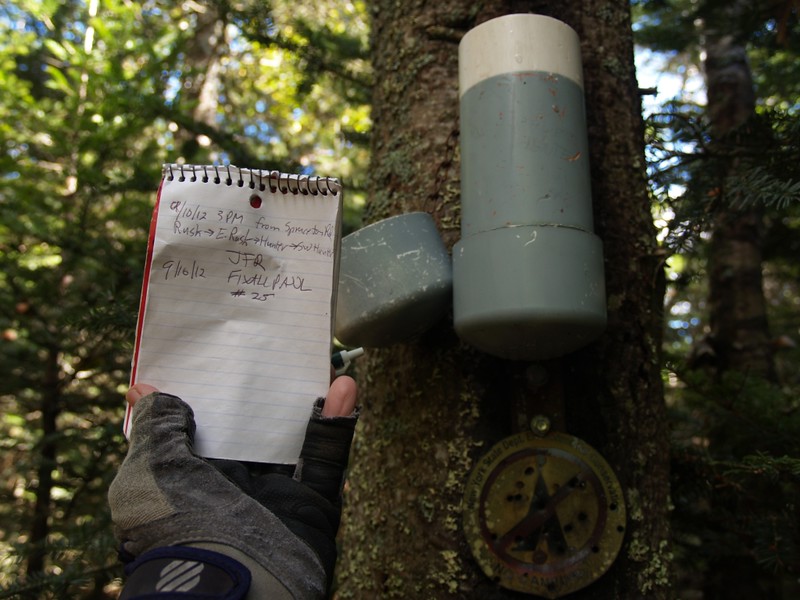 It was still early afternoon, and all we had left was the downhill hike to the van. But at least there were two more things to make the trail more exciting. One was the really stunning view at Geiger Point, where we took a relaxing little break in the sun, and the other was Diamond Notch Falls, where the West Kill spills over a ledge in several spouts. Very nice! I took some video, a couple of panorama shots, and even an HDR. We imagined that in the spring the falls must be absolutely booming, with many more spots cascading along its length. 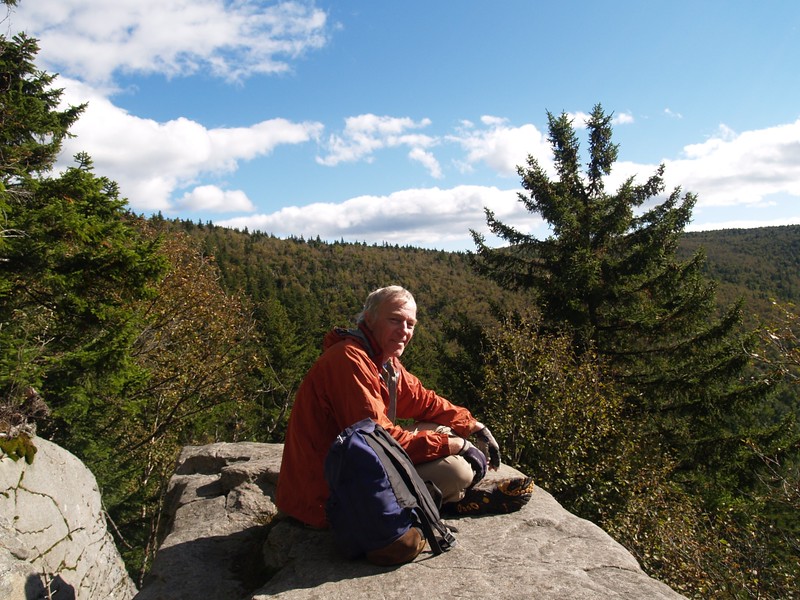 Me, relaxing in the sun at the Geiger Point Overlook on the Devil’s Path

Panorama of the Nettle-Floored Forest on the Devil’s Path 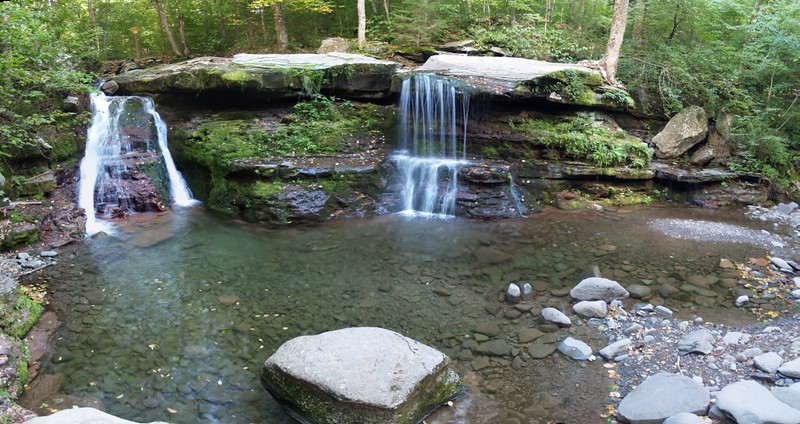 Panorama shot of Diamond Notch Falls on the Devil’s Path

Video of Diamond Notch Falls on the Devil’s Path

The rest of the hike was easy. We hiked down along the West Kill until the gate at the end of Spruceton Road. Then we hiked along the road for a half mile or so until we reached the parking area. There was still plenty of daylight left, just as we had hoped. The 12.6 mile hike took us about 11 hours, and, according to the gps software, we climbed about 3900 feet. And we both felt great! No blisters and no problems. We’d even finished off most of our food and water. Maybe we were starting to get good at this! 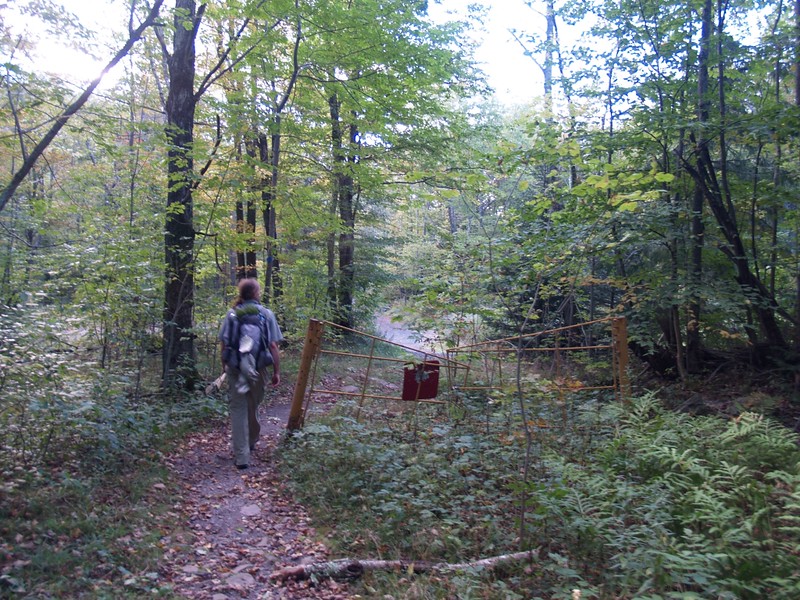 The Trailhead Gate on the Diamond Notch Trail 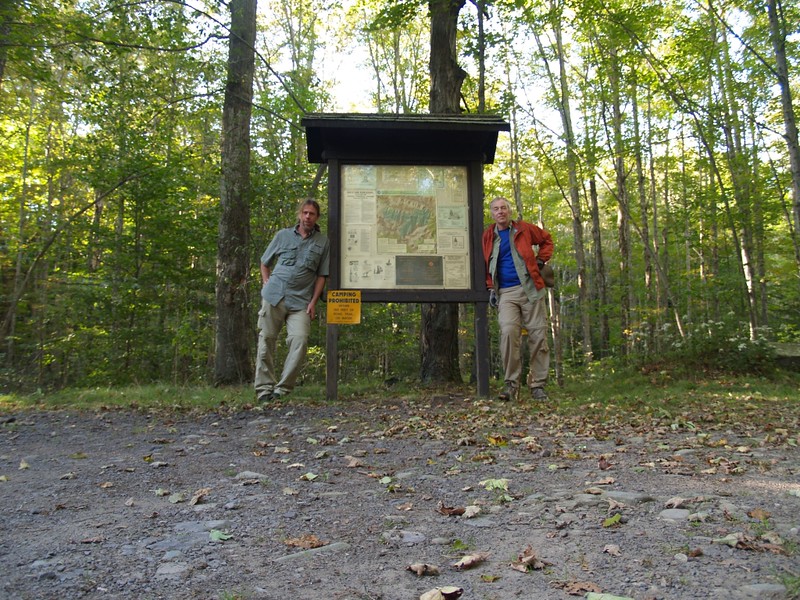 We got in the van and started the long drive home, but we made sure to stop in Phoenicia for some excellent ice cream first. It really hit the spot. And on the drive we began to plan our next year’s bushwhacking adventure…

To view the topographic map and GPS track of our hike visit my CalTopo Page.