My brother and I drove up to the Catskills for a dayhike on the Devil’s Path.  I was in New York for only a week, so we couldn’t make good on our dream of backpacking the entire length of the path, but a day spent hiking is a day well spent, and so we chose to visit the eastern end where it began.  This is also the area where I had fond memories from my youth, where I developed my life-long love of hiking and backpacking.  It was great to be back here.

We started hiking at the Prediger Road Trailhead.  Our plan was to bag two peaks, both Twin and Indian Head Mountains, while making a bit of a loop hike.  We decided to tackle Twin Mountain first, as it had some of the best views. 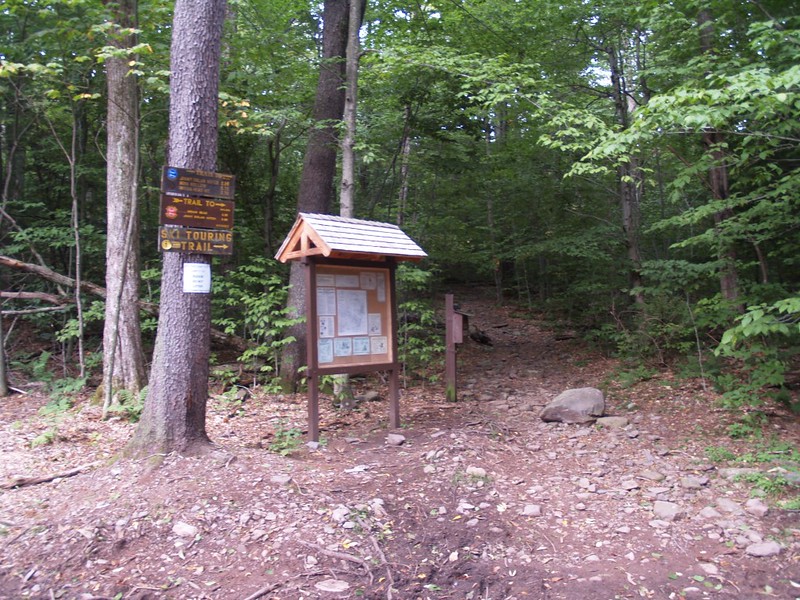 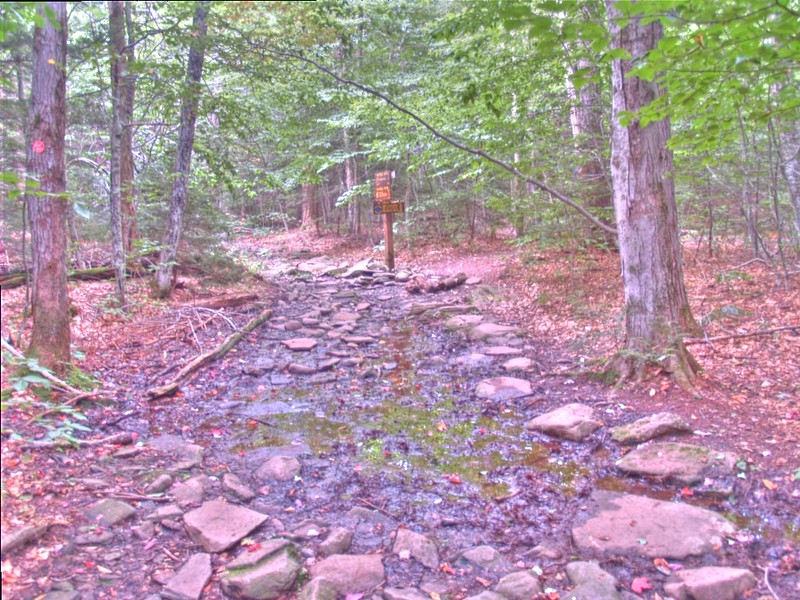 About a quarter mile up the trail we came to the “blue” trail which lead to Jimmy Dolan Notch.  At that point we left the “red” Devil’s Path trail, heading uphill directly to Jimmy Dolan Notch.  This trail was a bit of a shortcut as it intersected the Devils Path at each end, but we were using it to create a loop hike.  After about of thousand feet of continuous uphill climbing, we reached the notch.  Then we took a short break, and turned right on the “path” and began the main ascent of Twin Mountain, adding another 500 feet of elevation.  The trail was steep, and some spots even required a bit of scrambling.  All in all, it was a lot of fun! 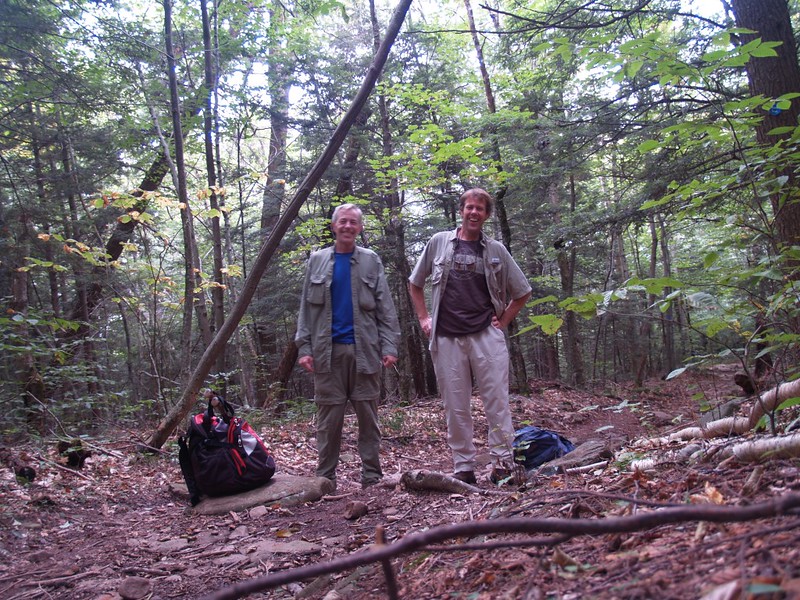 My brother and I pose for a timer shot 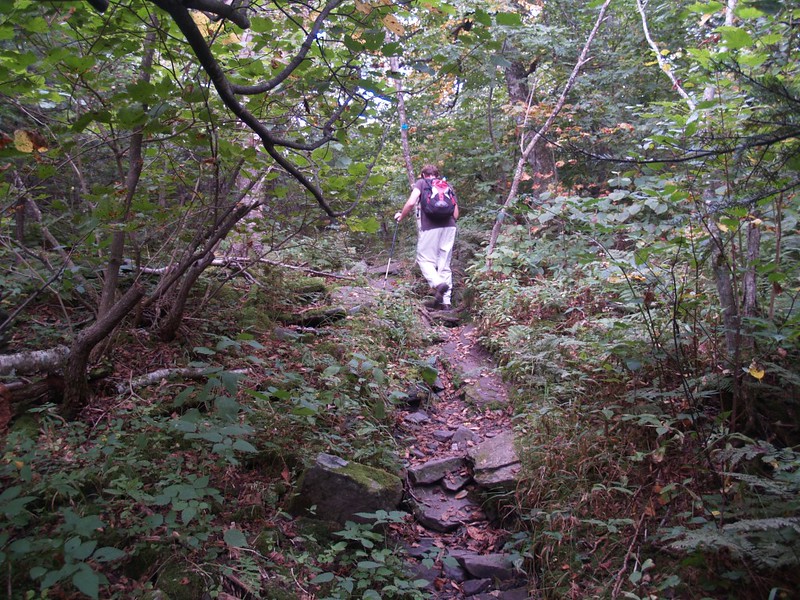 Lush greenery on the trail to the notch 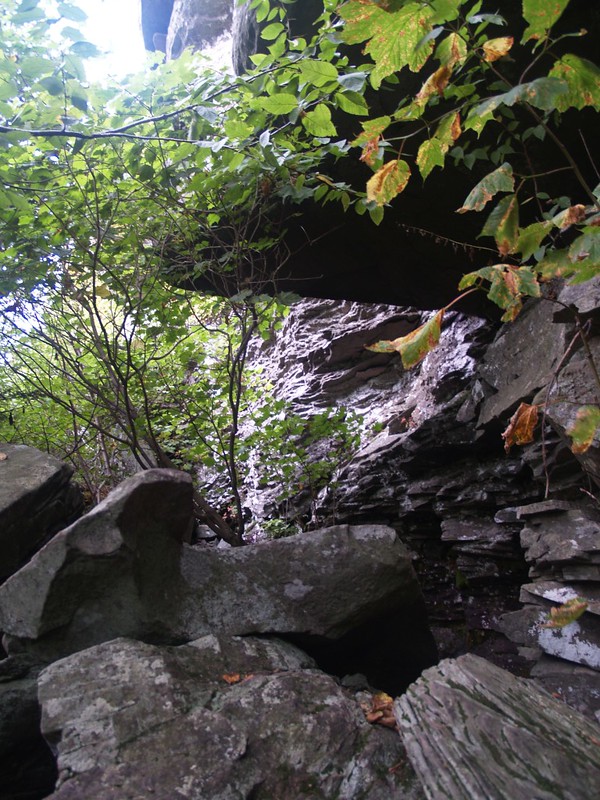 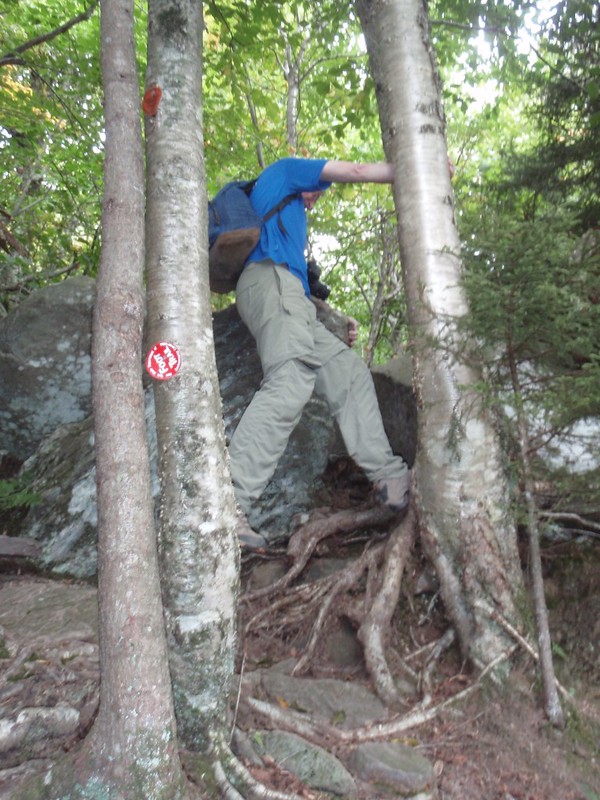 Looking east toward Indian Head Mountain from a viewpoint on Twin

We made it to the south summit of Twin, and of course it wasn’t the “true” summit, so we had to keep hiking.  But that was why it was called “Twin” and it was also twin-like in that it, too had a fine viewpoint of its own, a rocky outcropping on a cliff that towered above the maples and beeches.  We hung out and enjoyed the view for a while, then hiked on to the main summit.  This view was even better, if that was possible, and we ate some snack and relaxed.  We were here on a weekday, and so far we hadn’t met a single soul.  We had the wilderness to ourselves, and it was very peaceful. 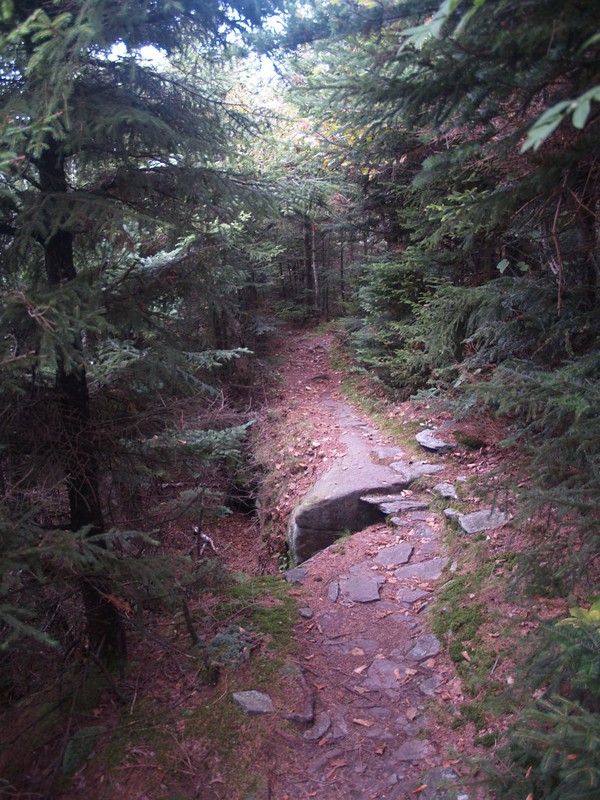 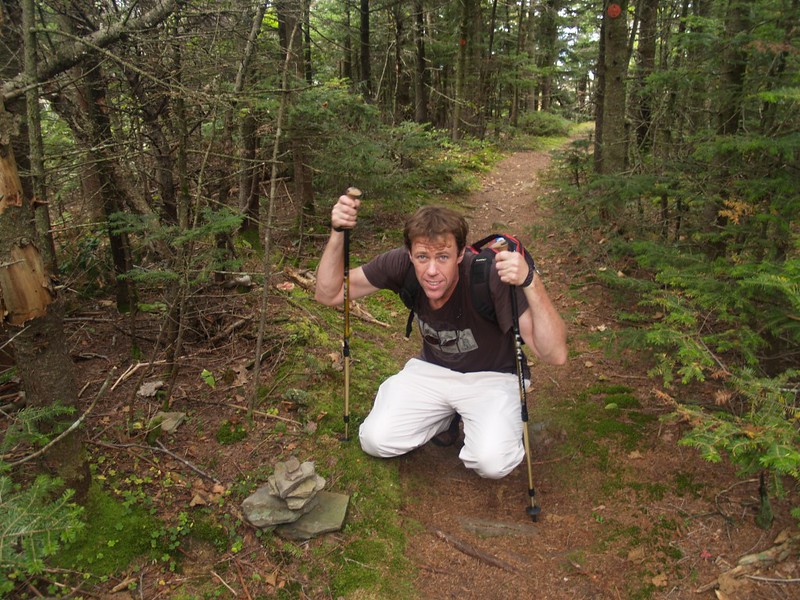 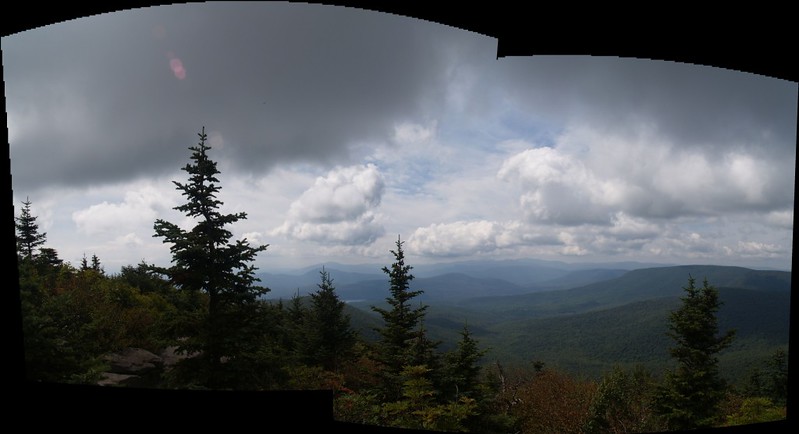 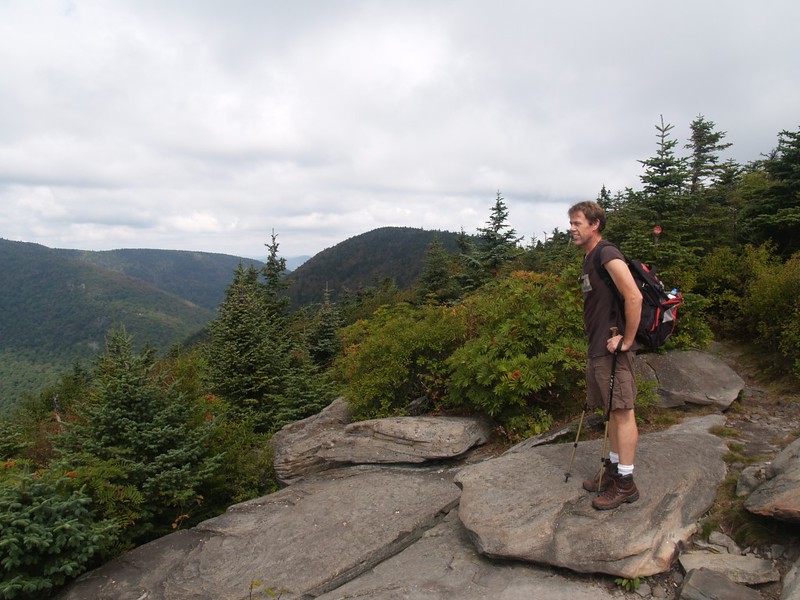 Looking west with Sugarloaf Mountain (3800 feet), the next peak on the Devil’s Path, center, from Twin’s summit

We were thinking about leaving soon, as we really wanted to get to Indian Head, but it was too mellow up there.  Suddenly, we heard some voices.  Other hikers!  We realized that they were ascending from the west, uphill from Pecoy Notch, and were nearly upon us.  We looked at each other, saying nothing, but we immediately began repacking our gear in silence.  We donned our packs and stealthily hiked away, back the way we came.  Not only did we not really want to see anyone else, we also thought that they, too, would be happier if they could enjoy their own time of solitude on the summit.  Win-win.

So we headed back to Jimmy Dolan Notch, downclimbing the steep trail, but this time we continued straight on the red trail and climbed directly up Indian Head Mountain.  It was steep but satisfying.  We were sweating when we reached the top and were feeling strong.  This was a real trail, steep and serious, not some wimpy, easy-walking horse-trail like I was used to hiking out west.  They don’t make “Class 3” trails out there, complete with sections of scrambling and using hand-holds.  This was a lot more fun. 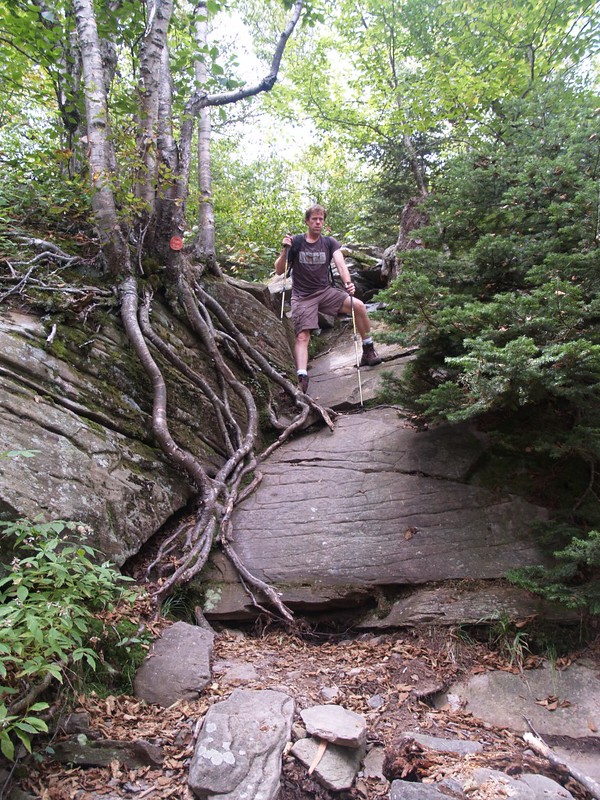 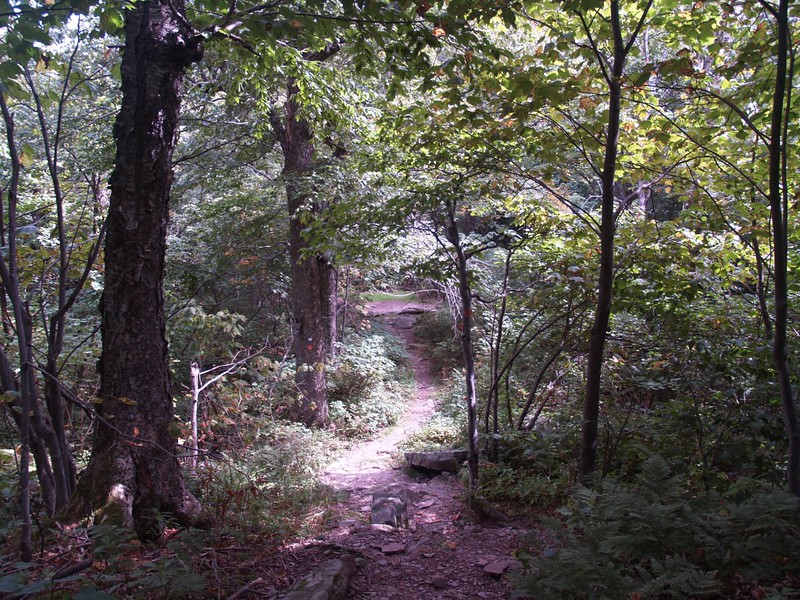 We arrive once again at the notch. Onward to Indian Head Mountain! 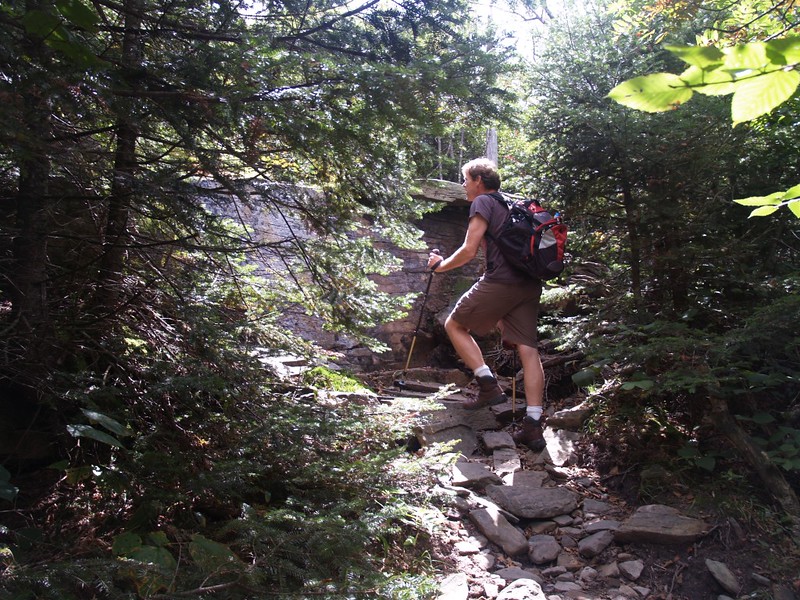 Steep climbing up the western side of Indian Head 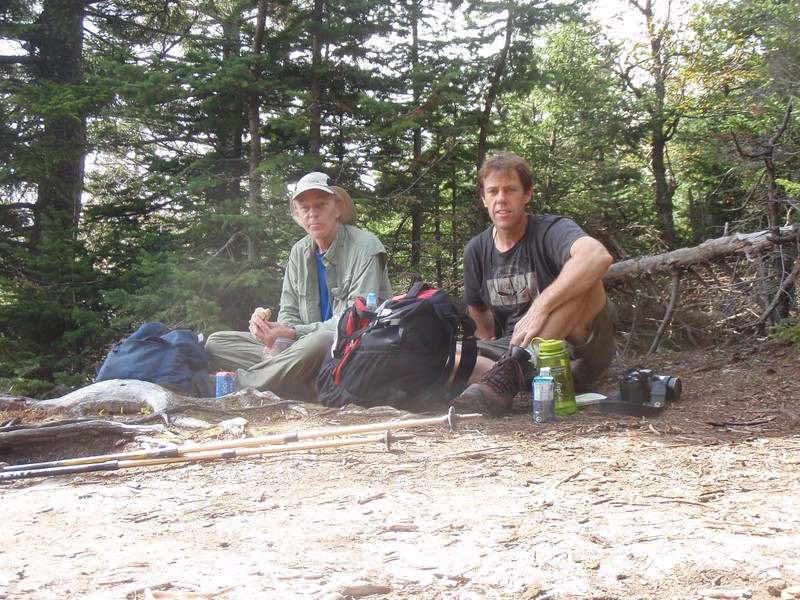 Taking a break on the summit of Indian Head Mountain

Indian Head Mountain, when seen in profile from a certain direction, has a number of “bumps” that gave it that name:  It looks like an Indian’s head, complete with aquiline nose!  Needless to say, some of those bumps have great viewpoints, and we took advantage of all of them.  As the trail went around the eastern end of the mountain we were able to see off to the south and east, getting views of the Ashokan Reservoir and also, off in the hazy distance, the mile-wide Hudson River as it flowed south toward New York City. 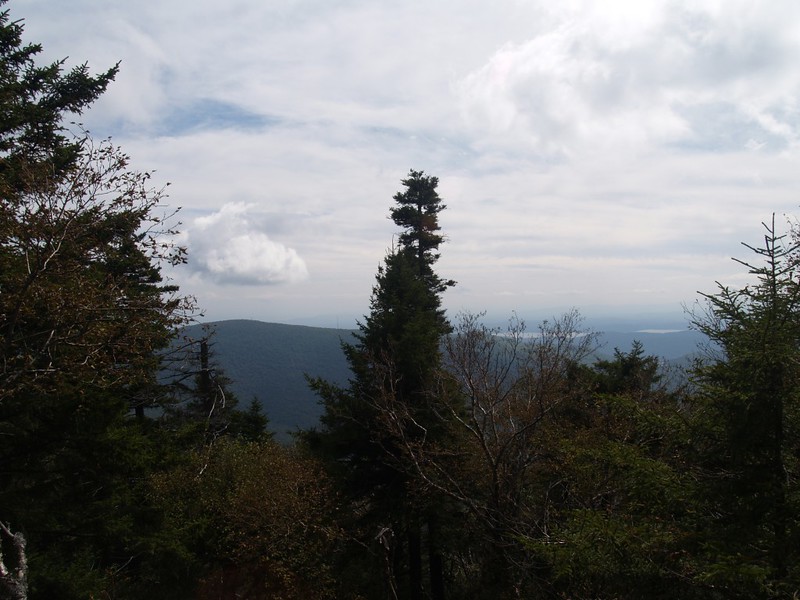 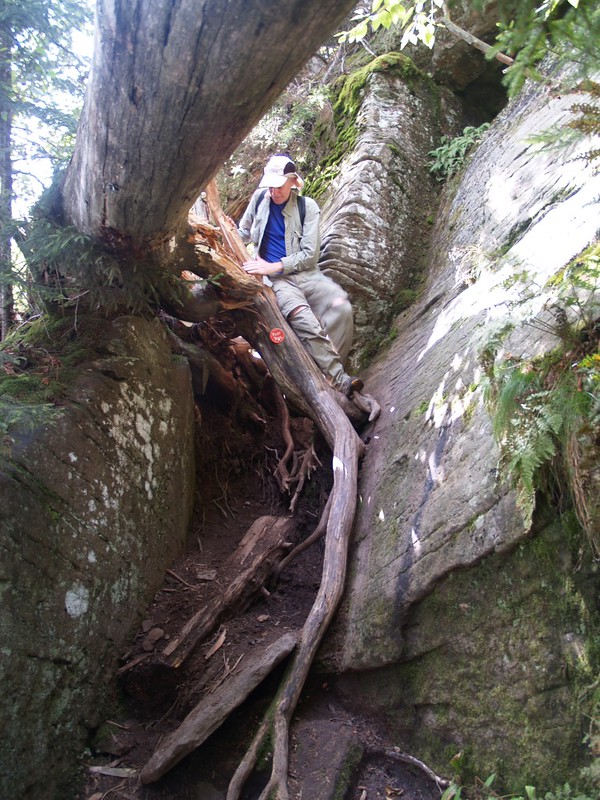 Downclimbing the steepest trail I’ve ever been on: The Devil’s Path 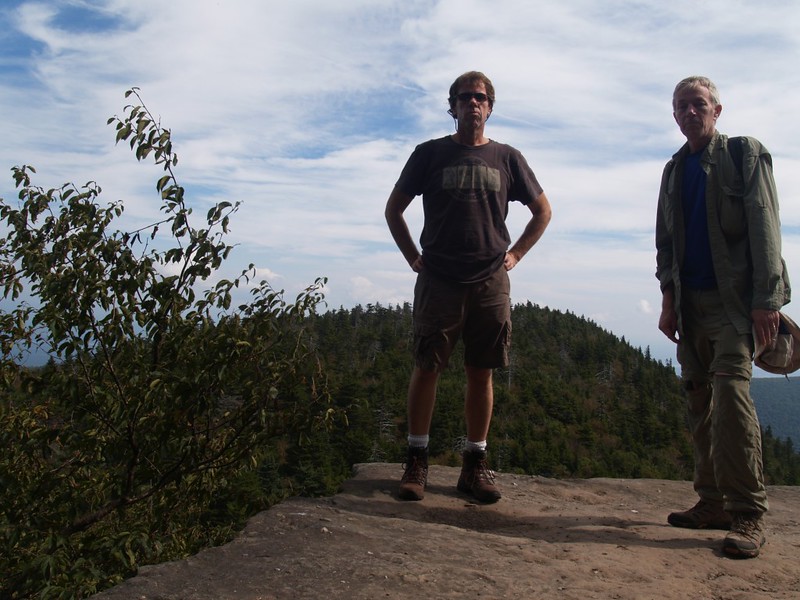 Timer shot of the two of us from the best viewpoint on the mountain: The tip of the “nose” 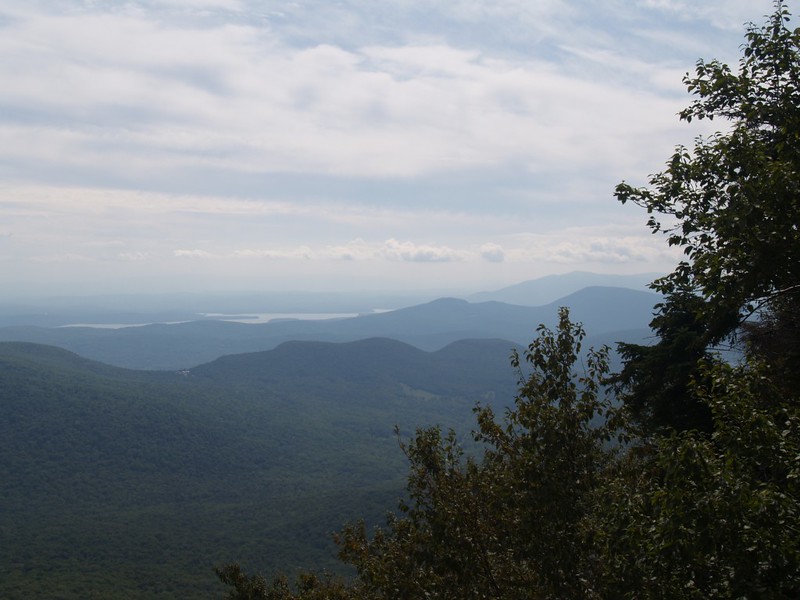 The view southeast looking at the Hudson River

After more excellent views we headed down to the Devils Kitchen area. It was getting late (too much time spent “viewing”) so we headed back to the car at the trailhead rather than visit the stream and waterfall near the Devils Kitchen Lean-To.  This last section of trail was relatively flat and was enjoyable mainly because we really got to stretch out our leg muscles, taking long strides through the forest.  All too soon, we reached the trailhead and it was time to leave.  Goodbye, Catskills!  I’ll be back next year for sure! 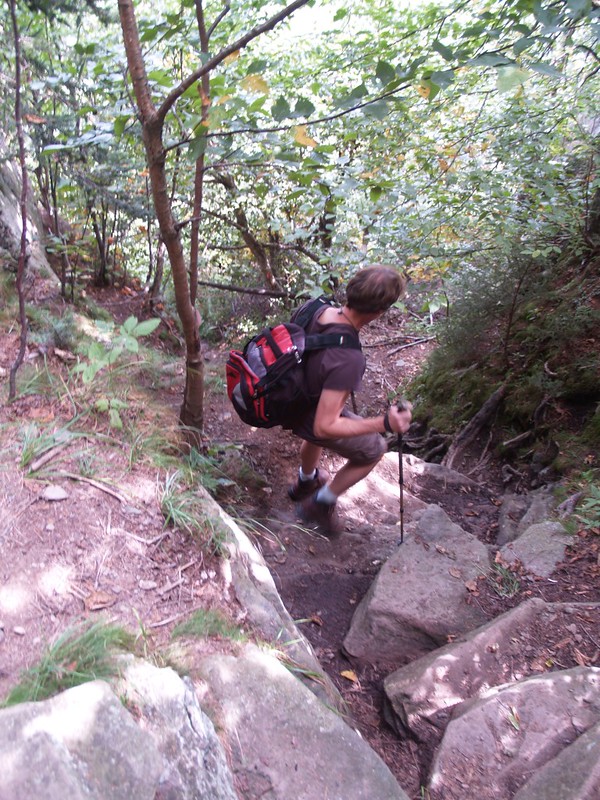 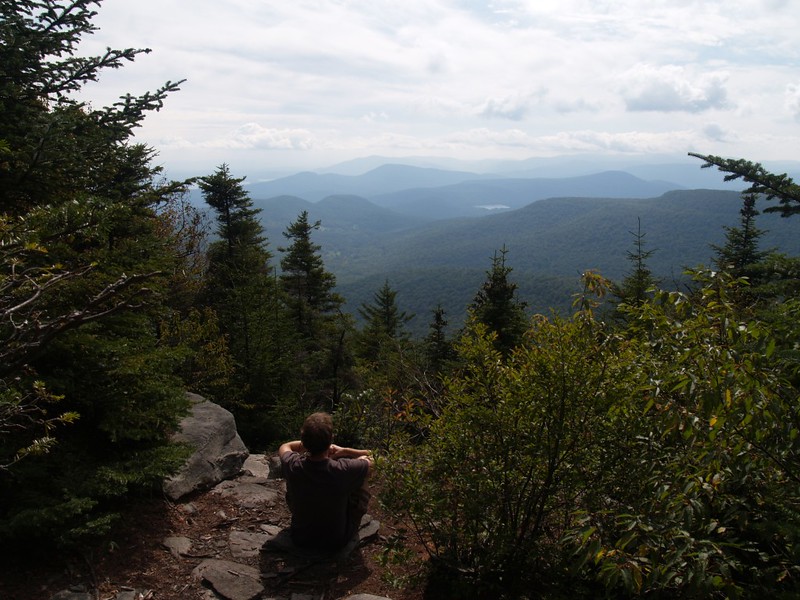 Multi-shot panorama from the eastern end of Indian Head Mountain 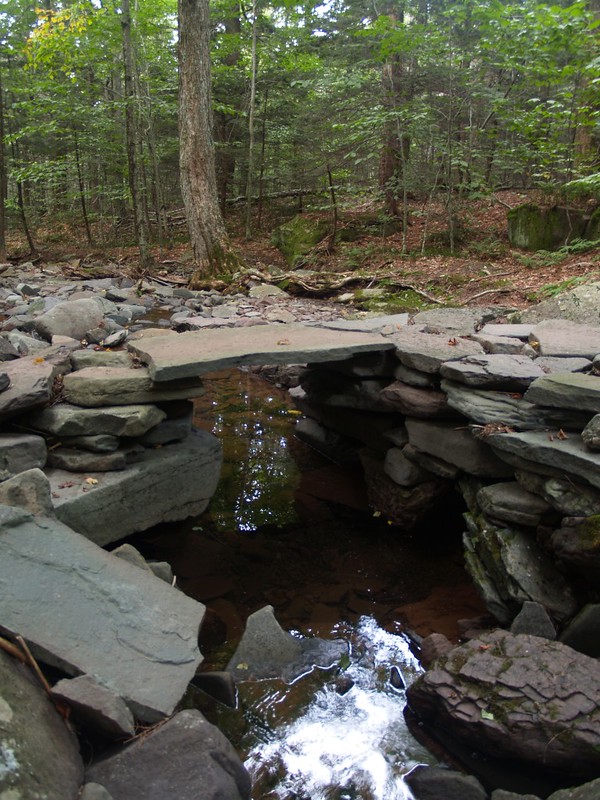 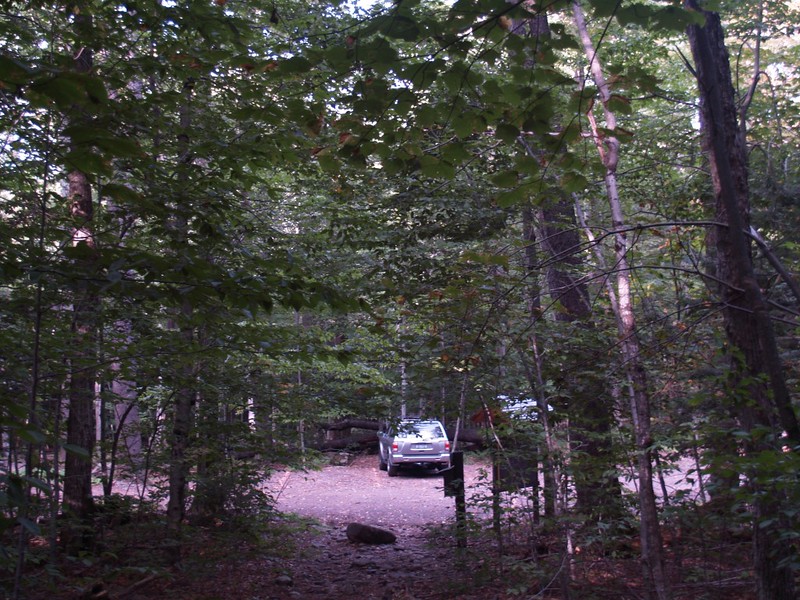 We arrive back at the trailhead parking area

View from Platte Clove Road, Indian Head on the left and Twin Mountain on the right

All in all, it had been an excellent day, though a bit too cloudy and hazy for superb photos. We hiked a total of 8.3 miles and climbed about 2500 feet.

For even more photos see my Flickr Album Page.

For a topographic map showing our GPS track see my CalTopo Page.