This was our first time off-roading in the desert in our Toyota Corolla, so it was a pleasant surprise when we found that it handled the dirt roads amazingly well. Of course, it doesn’t have a lot of clearance, but I took a good look at the undercarriage to see where the vulnerable points were before we left, so I felt confident that we would avoid any major rock damage. Careful and slow driving (when warranted, where there is a profusion of rocks and declivities on the road) are the key to taking a passenger car safely into the desert.

We drove north out of Borrego Springs on DiGiorgio Road until the pavement ended and it became Coyote Canyon Road. This continued up Coyote Canyon for several miles. Amazingly, we were able to get the car beyond Third Crossing (we crossed the flowing Coyote Creek three times) which was a feat only my truck had done before. We were well-satisfied!

We parked the car just before the really steep, rocky bypass section of the road. No, we didn’t even bother trying to drive on this part. We simply got out our big backpacks and began hiking up and over the hill into Collins Valley. We followed a foot trail when we could and the road otherwise. We reached Sheep Canyon Camp and then decided to continue onward and camp at Cougar Canyon, as only backpackers would be staying up there. We didn’t want to camp near lots of loud, beer-drinking car-campers.

We had to hike the now-much-improved bypass road to Collins Valley. It would be best to have a truck with some clearance for this.

Sandy wash outside of Sheep Canyon.

We found a nice campsite near the stream emanating from Cougar Canyon and set up our tent. We pumped (filtered) lots of good-tasting water from the clear creek, and filled all of our water containers. We ate a tasty dinner and went to bed fairly early, not long after dark. At this time of year, with 14 hour nights, it’s hard to sleep that long, but we did our best! Just the same, we woke up at first light and watched a nice sunrise and moonset.

View back over Collins Valley from the trail to Cougar Canyon. Santa Rosa Mountain and Toro Peak are in the distance.

The stream is flowing nicely (as always) in Cougar Canyon.

Sunrise and Moonset over Cougar Canyon from our campsite

After breakfast, we got our daypacks ready, then hiked back to Sheep Canyon. We checked out the new “Fee Area” for Sheep Canyon Camp, where you have to pay ten bucks to use a site with a picnic table and fire ring. They were nice enough sites and worth the fee. But we hiked on, up the dry wash.

Sheep Canyon Camp, which is now a fee area ($10/day if you camp in a site with a picnic table and fire ring).

The main part of Sheep Canyon heads off to the right, and the much steeper South Fork heads up to that palm grove on the left.  We stayed up on the left side of the South Fork, where we found a nice use trail that many other folks (like us) had inadvertently worn on the way up-canyon. Staying down in the bottom of the canyon was also possible, but only sporadically, as there were often gigantic boulders and other insurmountable obstacles like catclaw plants and thick growth as you got nearer to the available moisture of the streambed.

We found that there was water flowing wherever there were palm trees, even if the stream sank into the sand in other sections of the canyon. Palm Trees in the desert tend to have their feet in the water. There were also sycamore trees (also called California Maples) here and there within the palm groves. It was winter, and many of the sycamores were in the process of dropping last season’s leaves, which were lying around, all brown and crispy, on the nearby sand and rocks. The branches were just beginning to show signs of new leaves budding. Spring in the desert.

Entering the South Fork. Sycamores and Palm Trees. There’s a nice use trail if you stay uphill a bit on the left side.

Along the way to the upper palm grove we came upon a lovely granite wall where a tiny waterfall gurgled. But the waterfall was around a corner, deeper inside the granite gorge. So Vicki decided to climb in there to get a video of it. But she didn’t take into account just how smooth the granite had become over the eons of time, and she slid down into a small pool, getting her boots absolutely soaked. And the sad part was that she slid down so slowly that she could only watch as the inevitable happened. After that, it didn’t matter any longer, so she climbed right into the slot and got her video. I’m mostly sad that I didn’t get a video of her sliding into the stream!

A granite chute, well-worn and smoothed by the flow of sandy water 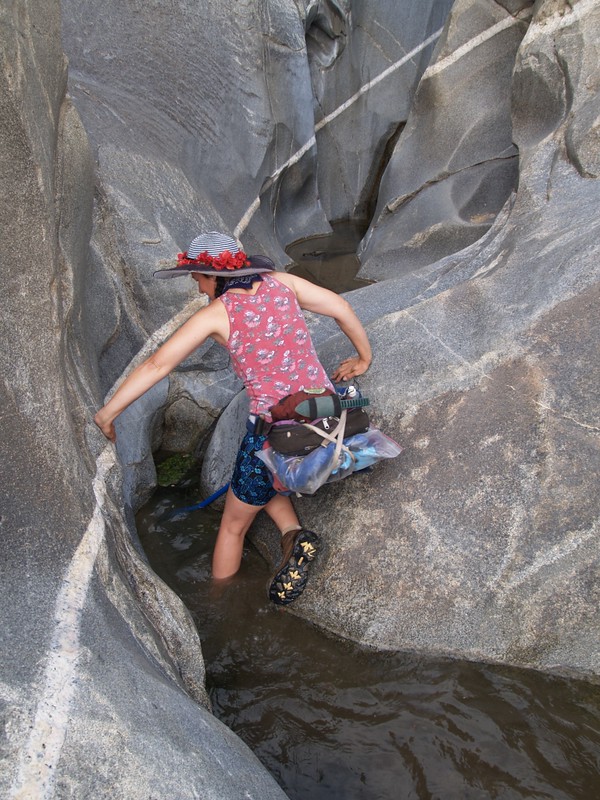 Video of Vicki trying to get close enough to the waterfall

Vicki’s video of the low-flow waterfall

After that little episode, we climbed up and around the chute and discovered the upper palm grove not too far away.  The canyon was very steep, and the boulders large.  It was slow going.  We figured that the upper palm grove would probably be the upper limit of the day’s exploration.  Or at least a pleasant place to have lunch.

As we climbed higher into the canyon, we saw unmistakable signs of the ravages of fire. The upper palm groves had burnt a year or so ago. The trees themselves didn’t die (palm trunks are full of water) but all of the old leaves (and new leaves) had burnt away. Now that a couple of seasons had passed, the tree tops were full of bushy palm fronds, but the trunks were all bare and blackened by the fire. Black palm trunks with bright green tops: Not a normal sight. And the normally thicker growth down low by the stream bed was still gone, or only slowly recovering. Sad to say, it wasn’t all that pretty, by comparison with the cool, lush, oasis-like environment within a typical desert palm grove.

The upper palm groves had burned a year or two ago. I’m not sure what fire it was (if it was a named fire or only a localized fire).

Looking down at the black burnt trunks of palm trees. When your trunk is filled with water you can survive a wildfire. 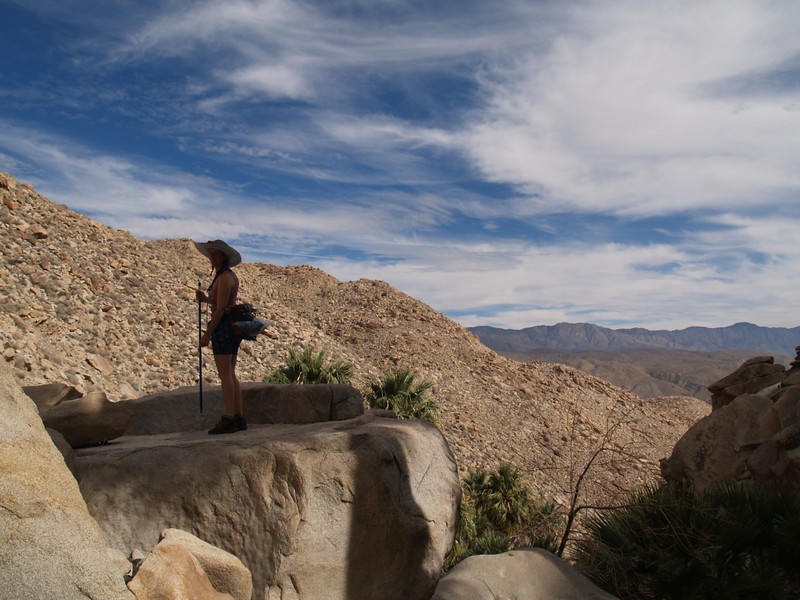 Nice spot for a lunch break

View from our lunch spot out over Collins Valley, with Rabbit and Villager Peaks in the distance.

Eventually we came to a tall canyon headwall that was made of gigantic boulders. Unclimbable boulders. We looked around and realized that this might be the end of the palm trees. But we wanted to be sure. So, like fools, we began scrambling up the right side of the canyon, a steep slope made of scree and loose rocks. It wasn’t much fun, but once you reach a certain point in a foolish exercise you realize that you might as well see it through, as it can’t get much more foolish. So we kept climbing. Finally we crested a ridge and were able to see that, yes, there were no more palm trees, just like we had originally thought. We took some pictures of the canyon above and the gigantic boulders below.

A large chockstone at the headwall above the palm grove.

We climbed up a steep scree slope to get around the chockstone, but there wasn’t much more to see up-canyon. We turned around at that point.

Let’s face it: The best view was back down the canyon.

We decided that we’d climbed far enough into the south fork of Sheep Canyon. Of course, at this point we realized that we had to climb back down that steep scree slope without falling or killing ourselves. Oh joy. Luckily, Vicki had her hiking pole, which helped a lot. I had to make do with my reflexes, as usual. We half-slid and half-stepped our way back down to the upper palm grove, then continued along the easy use trail back to the South Fork’s junction with the main part of Sheep Canyon. We took a break by the stream. It was relaxing. 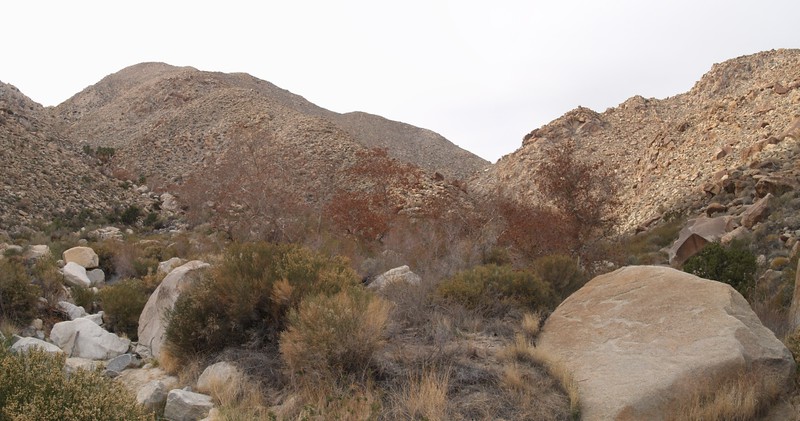 Panorama view looking back up Sheep Canyon, the South Fork is on the left 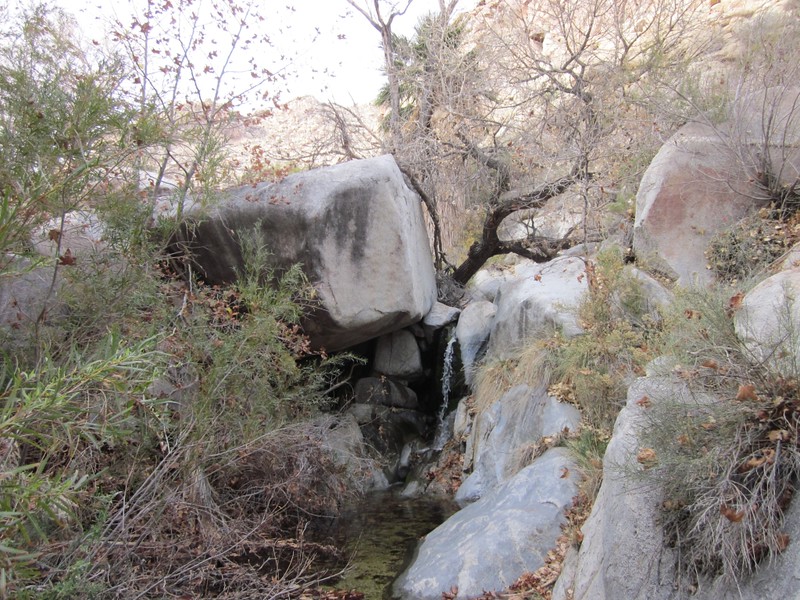 Video of a small waterfall in lower Sheep Canyon

We hiked back around the corner to our campsite in Cougar Canyon and had a nice freeze-dried meal. It felt good to be “home” at our tent. We watched a nice sunset and went to bed. This time, I spent a couple of hours reading before falling asleep, using my headlamp for light. I think I stayed awake until nearly 7:30 PM! I woke up once more in the middle of the night, went outside to look at the stars and moon, then headed back into the tent for more reading. I finally got to sleep once again after another hour or so. These long nights are far too long.

In the morning we took our time getting ready, then hiked back to the car. We took a few more driving videos this time, as we were feeling more confident about the car’s abilities on the dirt roads. We also drove quite a bit faster. We had some fun listening to the car’s “traction control” complaining to us, via repetitive beepings, that we had lost traction in the deeper sandy sections. We almost named the car beep-ee-dee-beep due to its near-constant nagging. But we had lots of fun, and made it back to the paved road safely. Another fun weekend in the desert!

The rest of the pics from this trip can be viewed on my Flickr Page.