We drove out to the southern end of the Anza-Borrego desert on a Saturday, after a late start. We took our time and drove slowly on the dirt roads. We were in no rush.  Tomorrow would be our big hiking day.  Today was just for fun.

Along the way, we examined a string of train cars that was parked on a siding near Dos Cabezas, and walked along the tracks of the San Diego and Arizona Eastern Railroad, examining an old wooden trestle over a small wash. This was nothing, trestle-wise, as our goal of tomorrow’s day-hike was to visit the Goat Canyon Trestle, one of the largest wooden railroad trestles in the world, but it was still fun. There was also an old water tank by the tracks, testament to the days of steam locomotives, which needed both fire and water to move. This was the final watering spot before the long climb up the Carrizo Gorge. 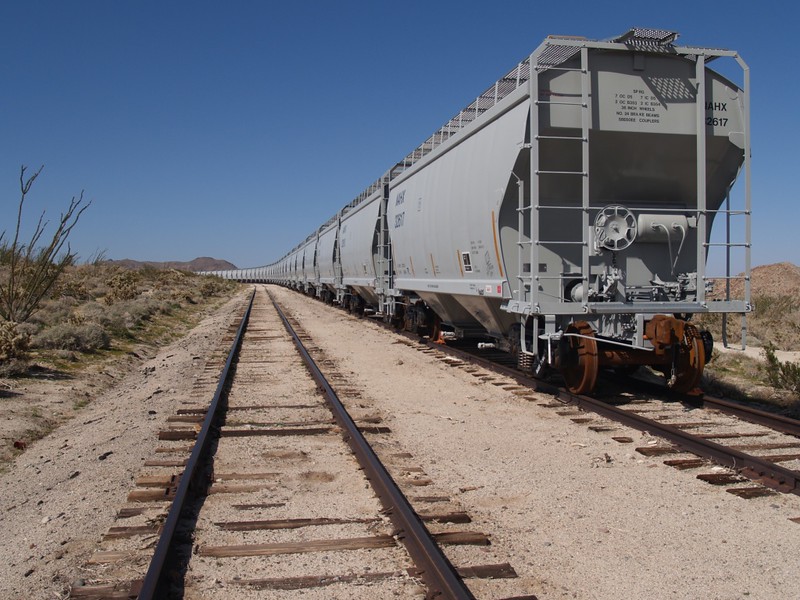 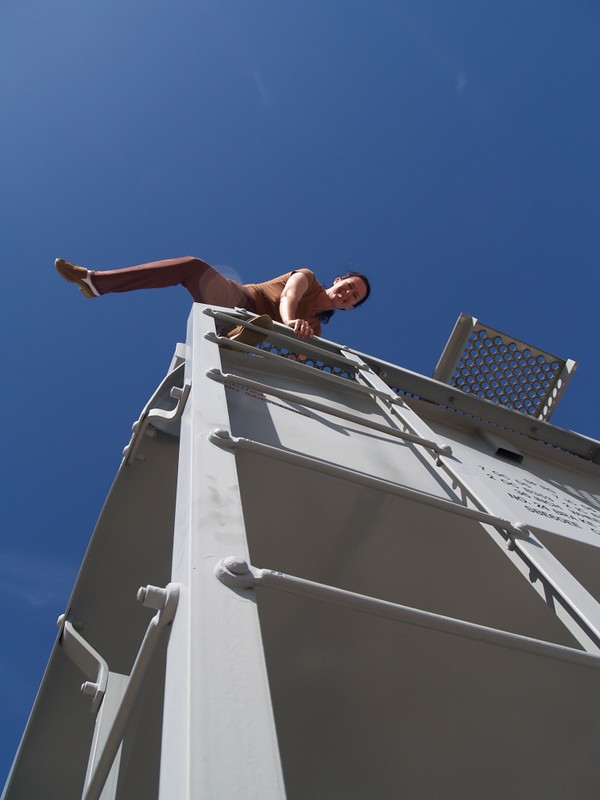 Vicki climbs down from the top of a train car. It’s the Wild West! 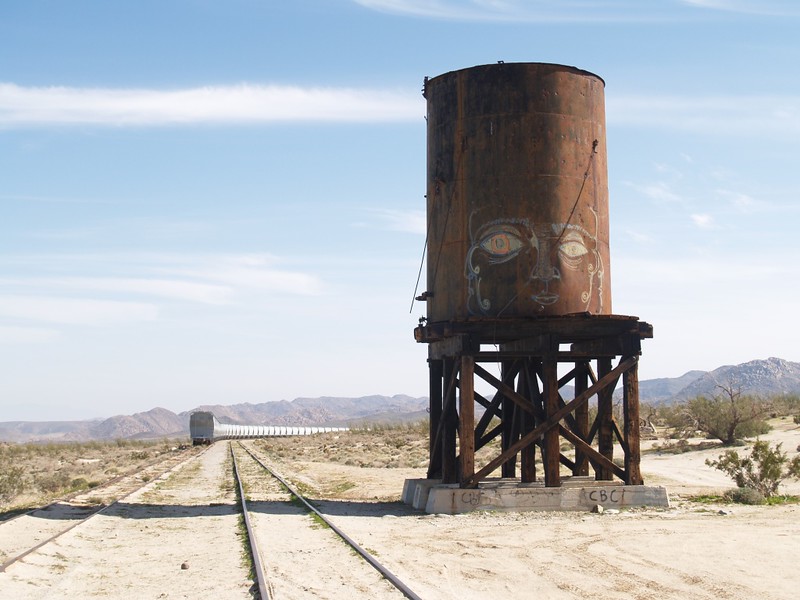 The old rusty water tank from the steam engine days 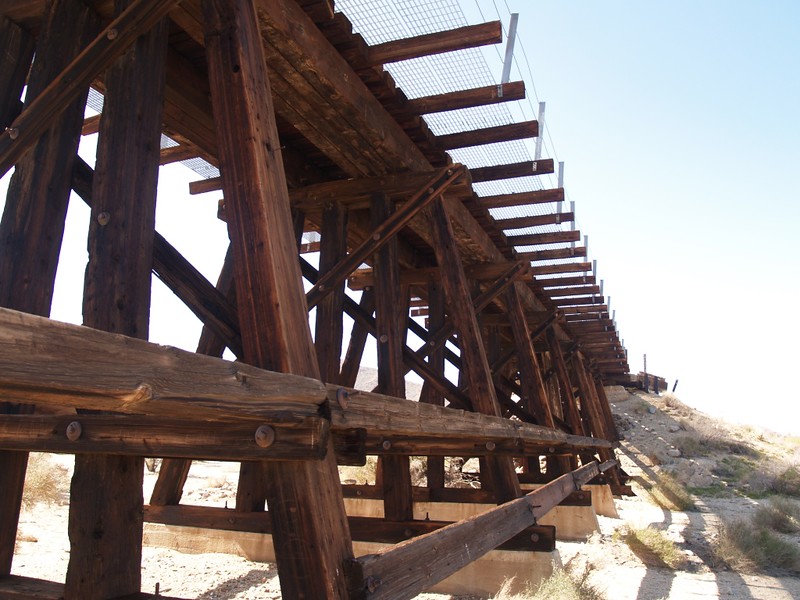 After that, we got back into our car and drove onward to the Dos Cabezas spring, the source of that water. It’s a nice campsite, but often crowded on winter weekends. Then we drove over to the Mortero Palms trailhead and camped. Our plan was to wake up early and climb up and over the mountain range to see the big trestle in the remote area. We set up camp, ate dinner, read our books, took one last look at the desert stars, and fell asleep. 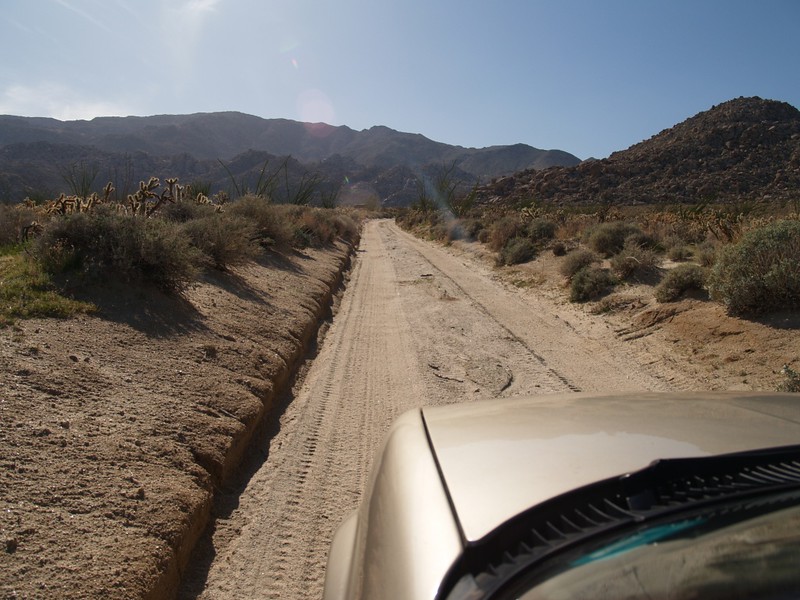 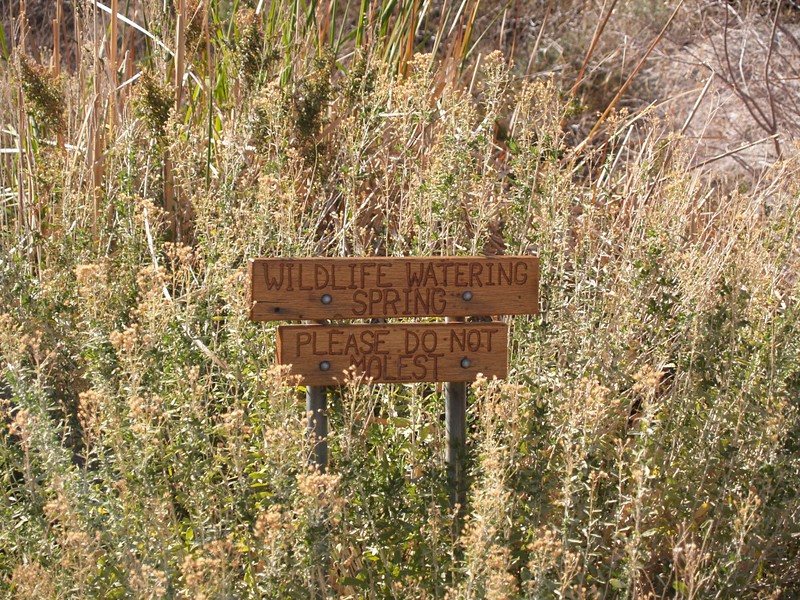 Sign asking people not to molest the Dos Cabezas Spring. Think of the Wildlife! 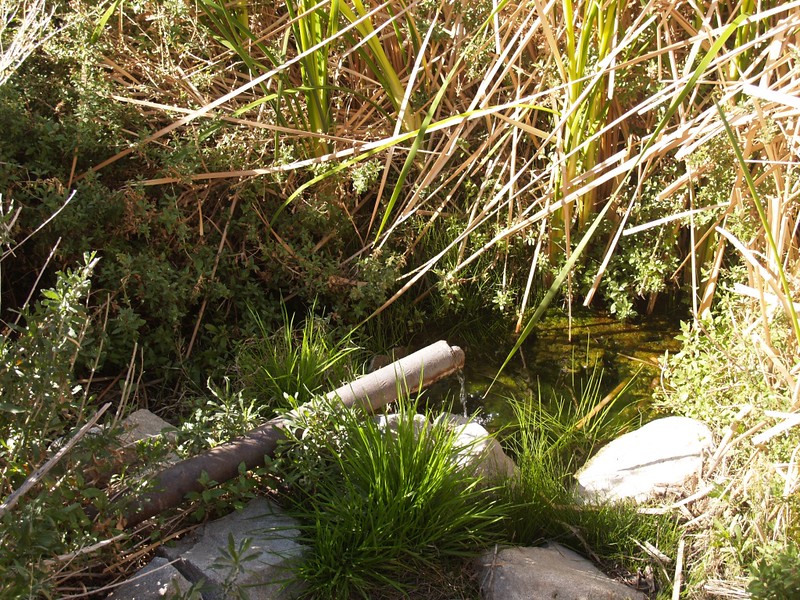 The pipe and small, yet steady, flow into the spring and watering hole 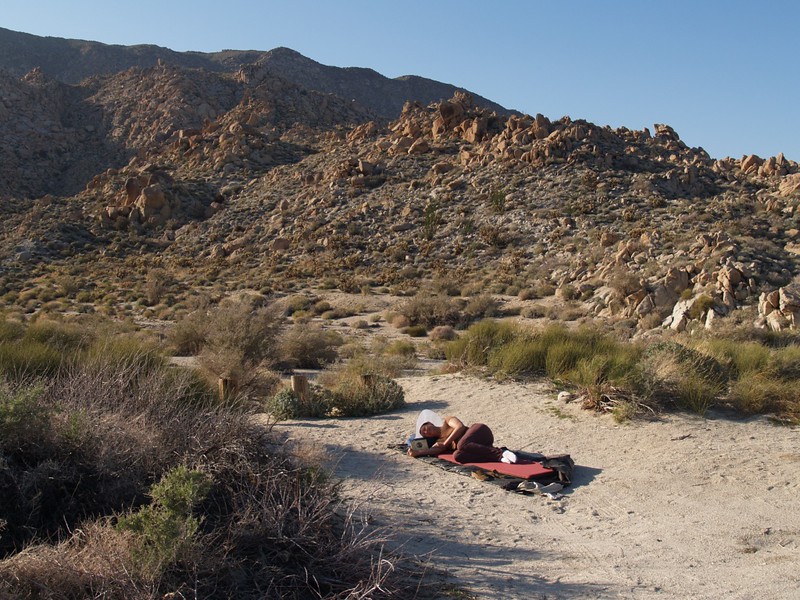 Vicki taking an afternoon nap near the Mortero Palms parking area. We set up our tent there.

From that spot, the sun struck our tent immediately at dawn, and we got going after some breakfast.  We packed up our tent and gear, and stashed everything in the car.  Then we donned our day packs. 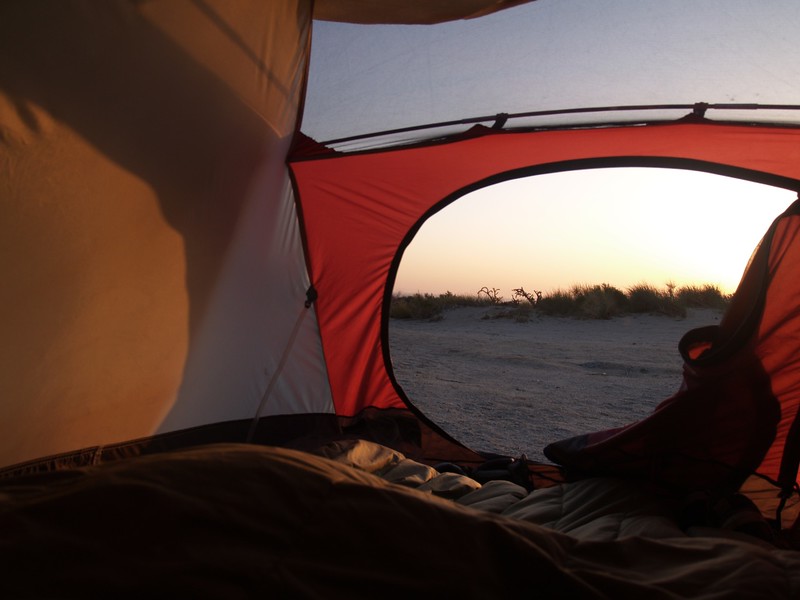 Looking out of our tent door at the crack of dawn. Time to get hiking! 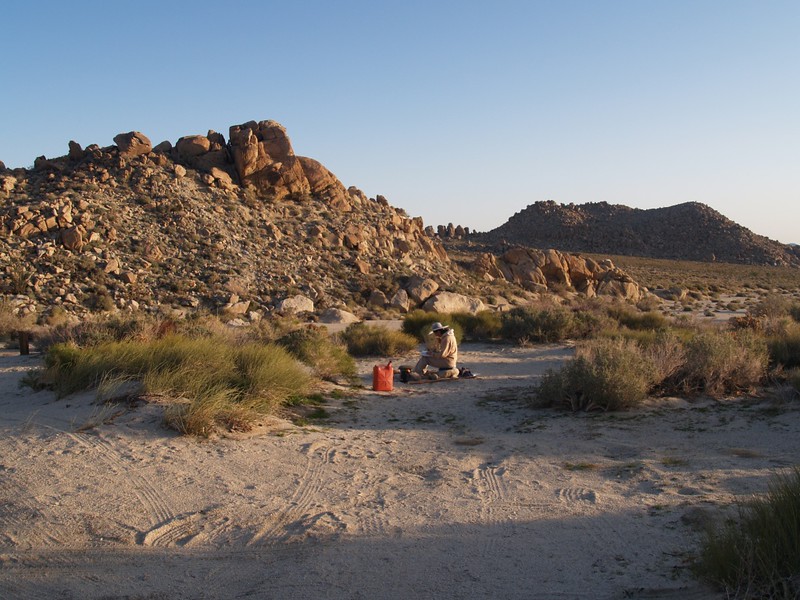 Up the canyon we went, stopping for a short while in the Mortero Palm grove, where there was running water. This is where most people turn around, but not us. We continued up the canyon, hiking and climbing over huge boulders. Indeed, these mountains seemed to be composed primarily of boulders, all jumbled into crazed piles. There were “caves” under many of them, and we figured that the local Indians used to live in some of the larger ones, ones that had nice views or were conveniently near the water and food sources like the palm groves. The presence of morteros (food-grinding depressions in the granite rocks) indicated that native Americans had lived here long ago. 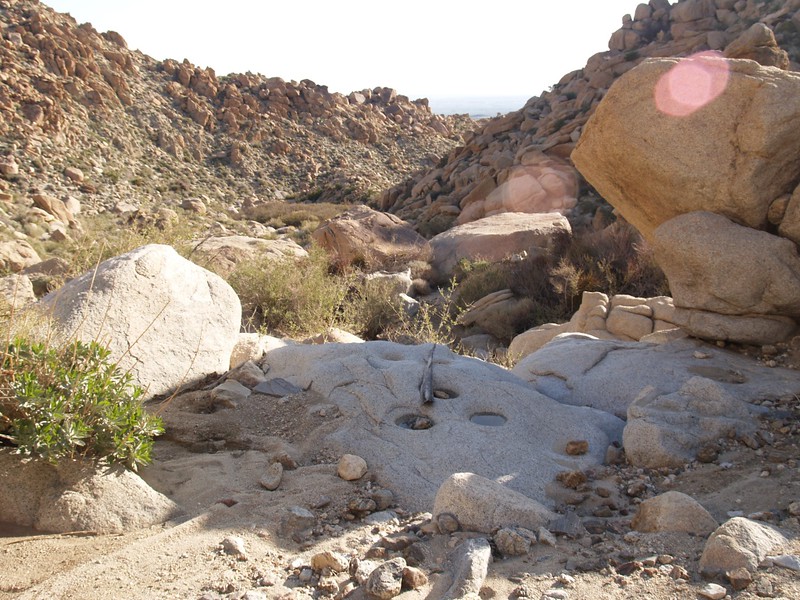 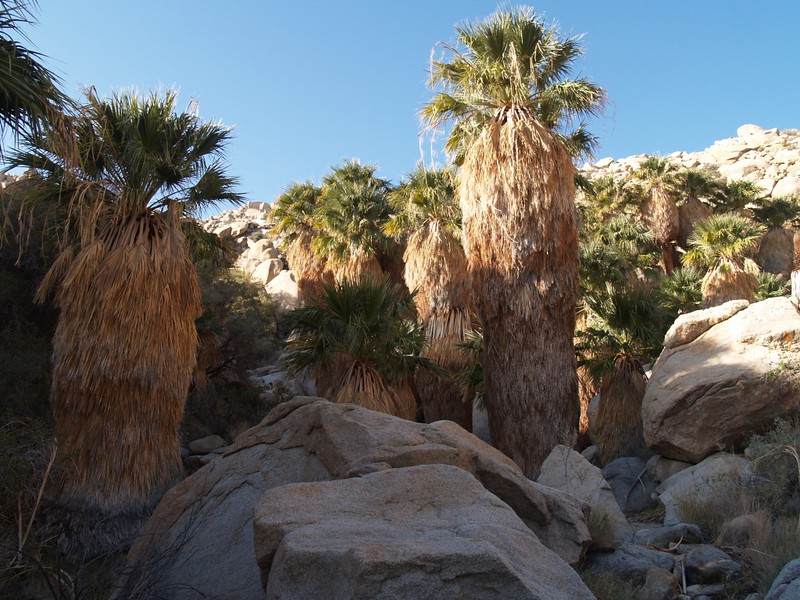 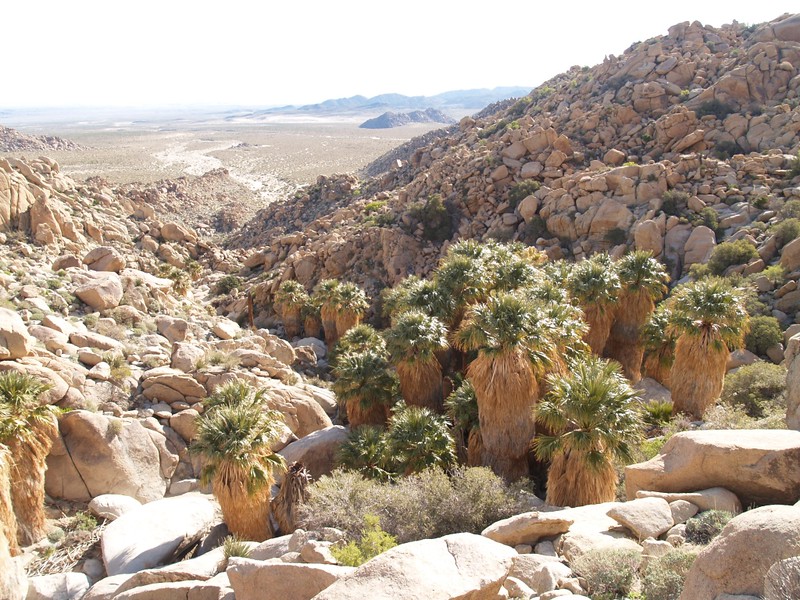 The trail was faint but usually fairly obvious, and when it wasn’t obvious there were occasional “ducks” or cairns of stacked rocks to act as trail markers. This was the first hike for me using my GPS with someone else’s track pre-loaded onto it. I found the track on the internet, and it turned out to be quite accurate. I had always wanted to hike to this railroad trestle, but had also heard that it was easy to get lost up on the flat area on the mountain top; the GPS made it easy. 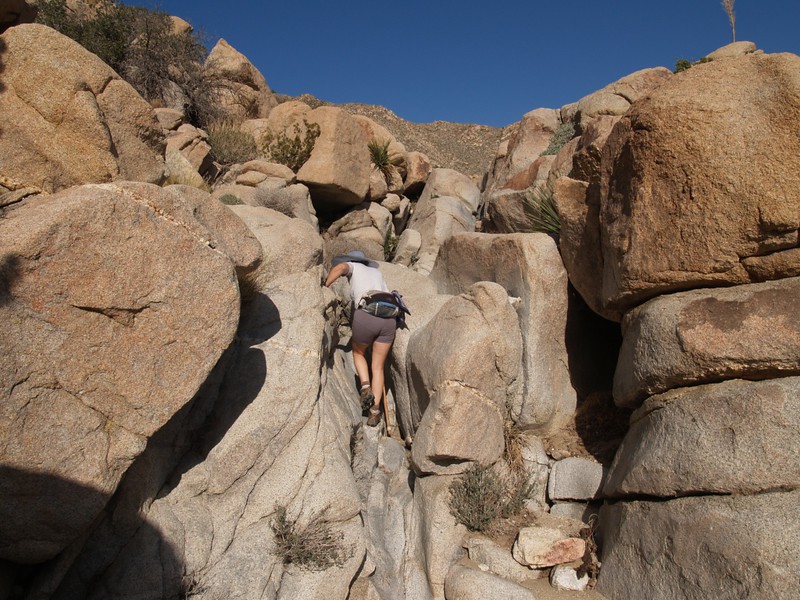 The going gets steep as we head up-canyon. This is Vicki scrambling up the granite rock of a dry waterfall 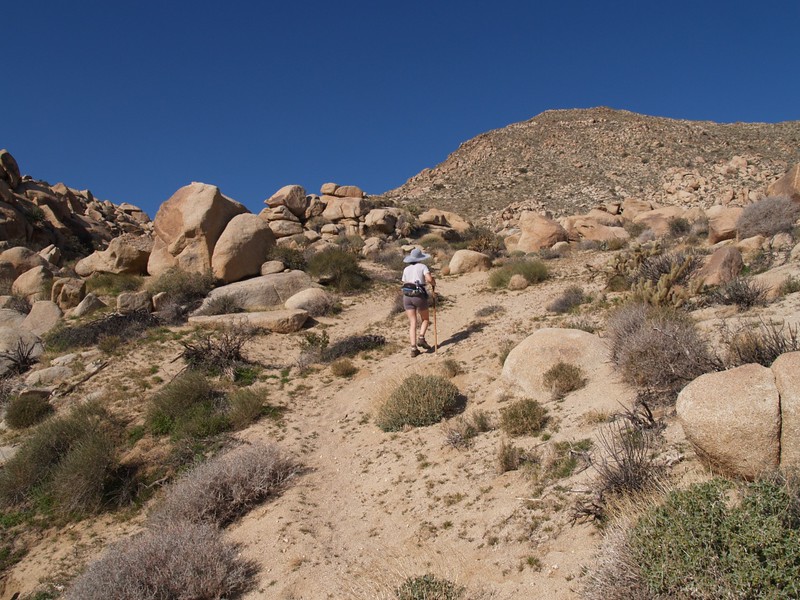 We top out at the head of the canyon 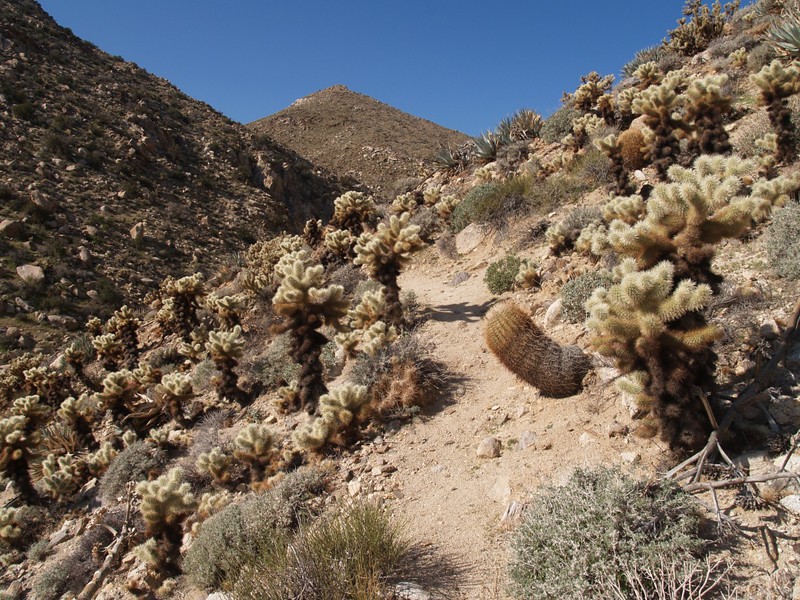 The trail continues uphill through a veritable minefield of cholla cactii 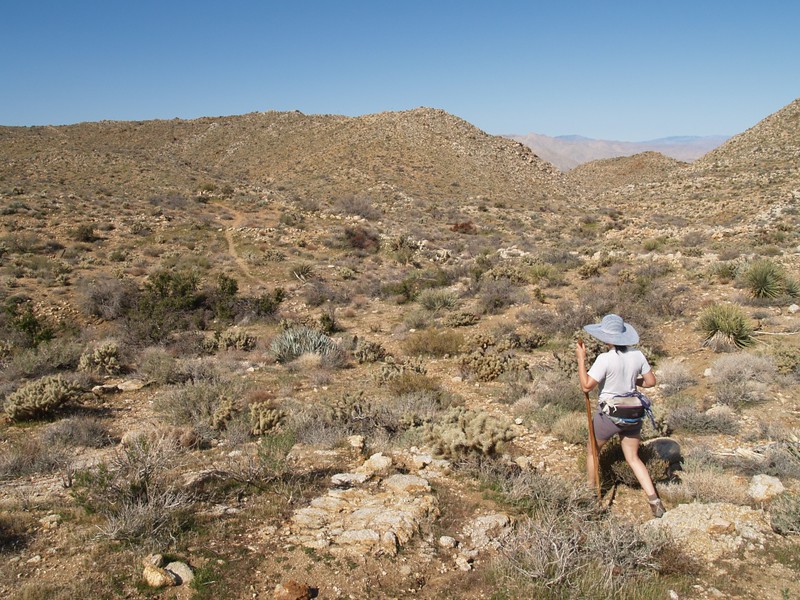 The high plateau area. The head of Goat Canyon is off to the right.

Even though we left camp fairly early, we were pretty slow in climbing, so that by the time we neared the top of the climb, another group had already caught up to us. Also, we were tired, and dreaded having to go all the way down Goat Canyon to the trestle, just to climb all the way back up to the top. Based on our pathetic speed, it looked as though we’d barely get back to the car by sundown. We decided to compromise, and headed off along the high ridgeline above the canyon, until we found a spot with a good view of the trestle down below us. We ate lunch and enjoyed the scenery looking out over the Carrizo Gorge. We could see the tracks winding away along the side of the mountain to the north, and could see where it disappeared into the many tunnels. There were also a few derailed boxcars sliding downhill below the tracks, evidence of earlier misfortunes in the running of what has often been called the “Impossible Railroad.” 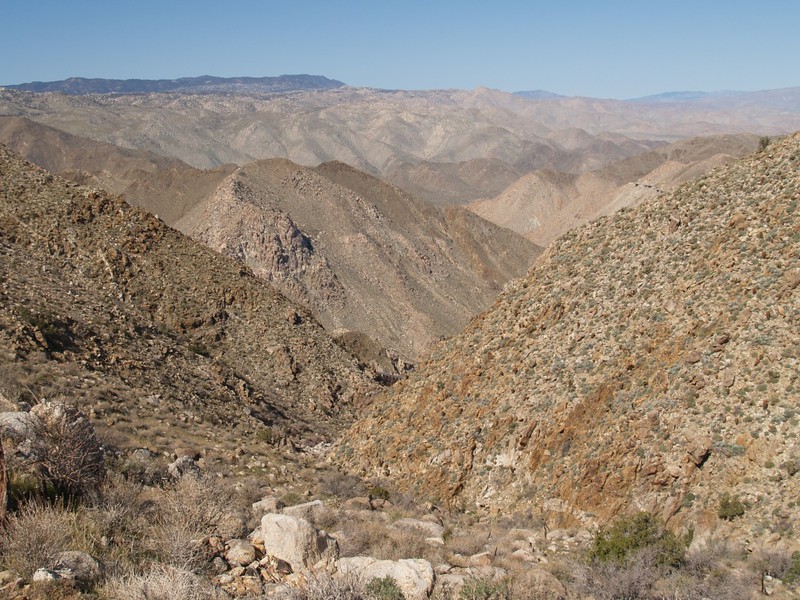 The view down Goat Canyon. That dark spot, center, is an upper section of the big trestle. 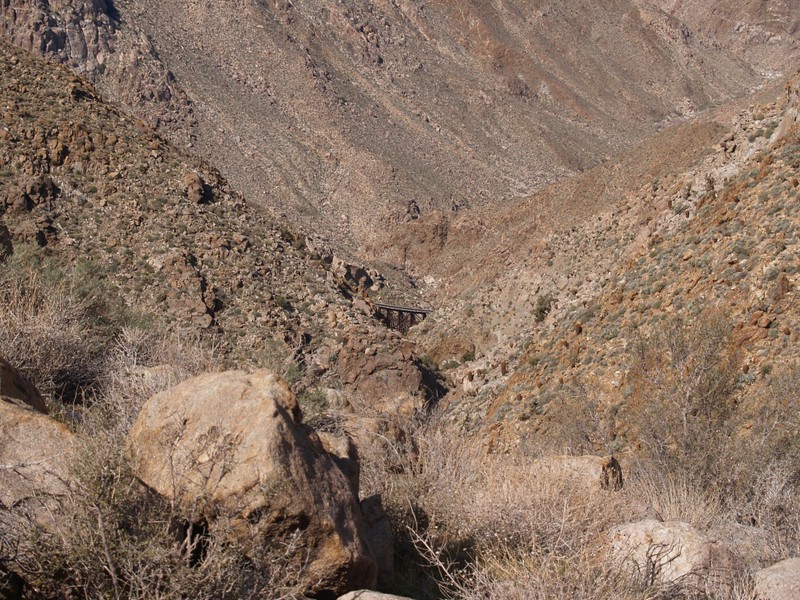 Zoomed in view of the top section of trestle. We had to hike further along the ridge to see the rest of it. 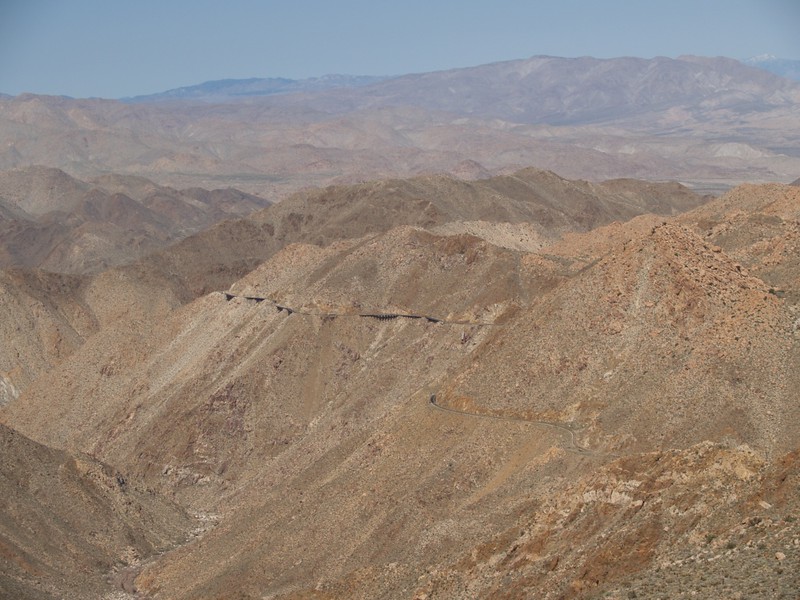 The tracks, trestles and tunnels to the north and the Carrizo Gorge down below. 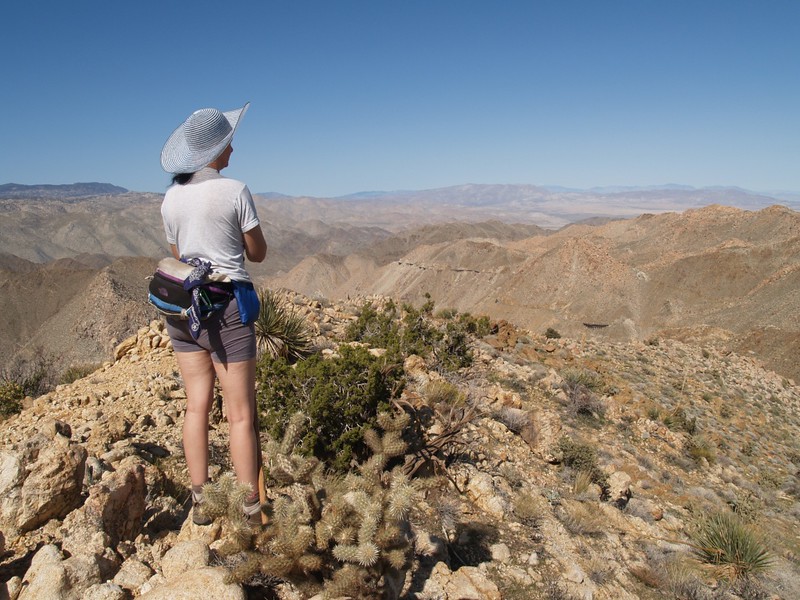 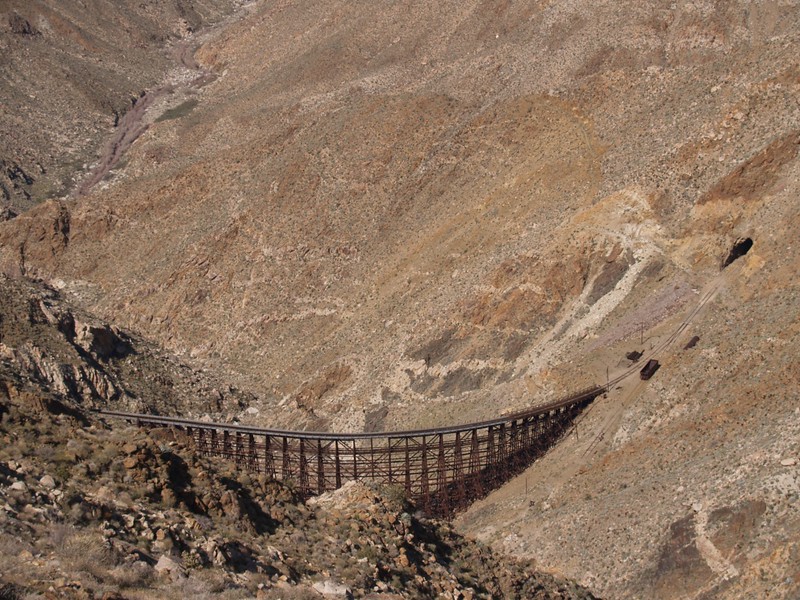 Zoomed-in view of the Goat Canyon Trestle from high above. This is as close as we got.

We turned around and hiked back the way we’d come. We met a few others coming up, several of whom had no clear idea of where to go. The popularity of this trail is nice, but the fact that none of them had a map or gps makes you wonder. We gave people directions, and no one got lost. Maybe something like this happens nearly every weekend during “desert season” out here in Anza-Borrego: Driving, hiking, getting lost, and getting un-lost. A new adventure springing to life as another comes to an end. 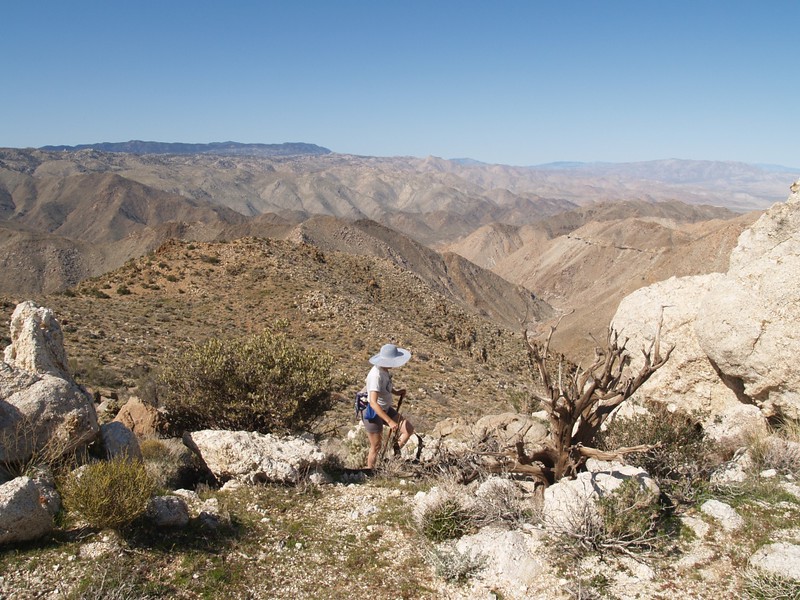 Climbing back up the ridge as we head back to the car, defeated in our quest for the trestle. 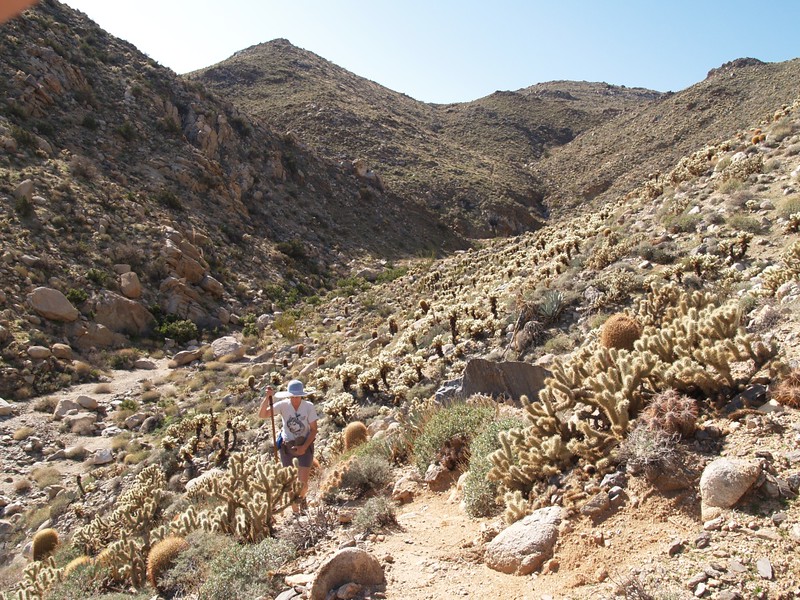 Hiking back through the cholla forest

On the way to the car we followed some ducks that lead us to a slightly different canyon than the one with the palm oasis. It was much easier to hike, as there were no giant boulders to climb down, just a gently switchbacking trail. We got to the car and brought out the stove. We were hungry! We cooked up a can of chili and relaxed as the sun went behind the mountains. 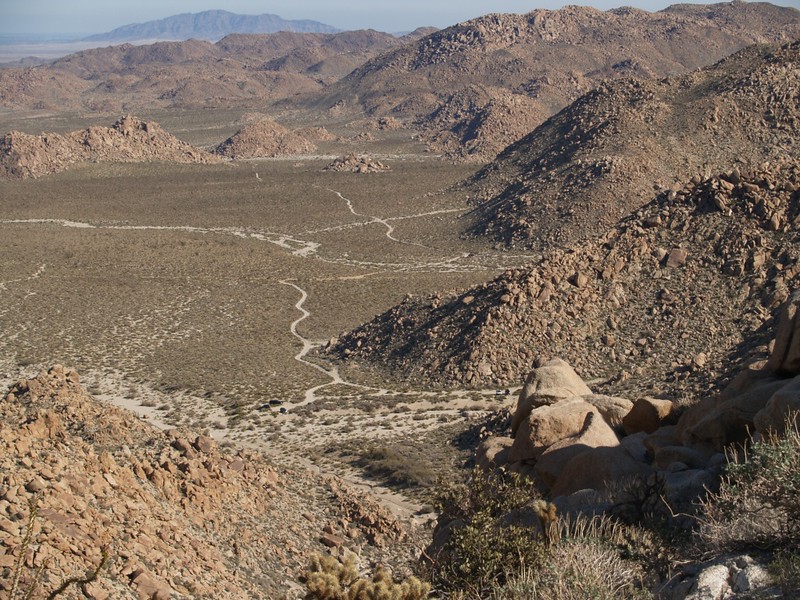 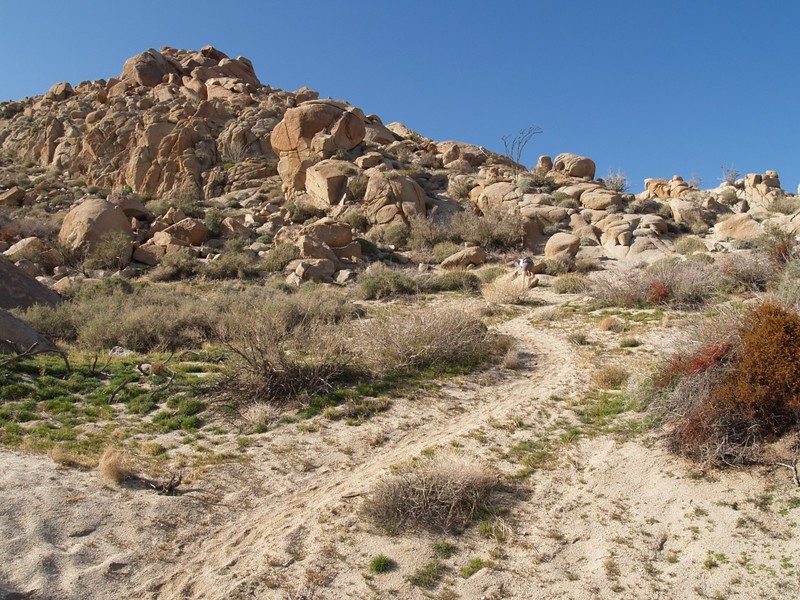 Looking back up the alternate, easier, trail to Goat Canyon 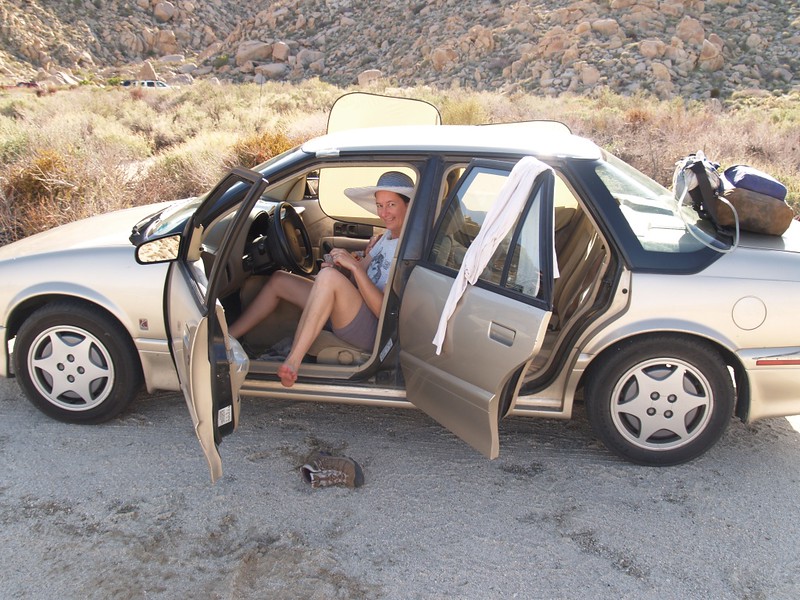 Back at the car, Vicki cools off her hot feet in the shade 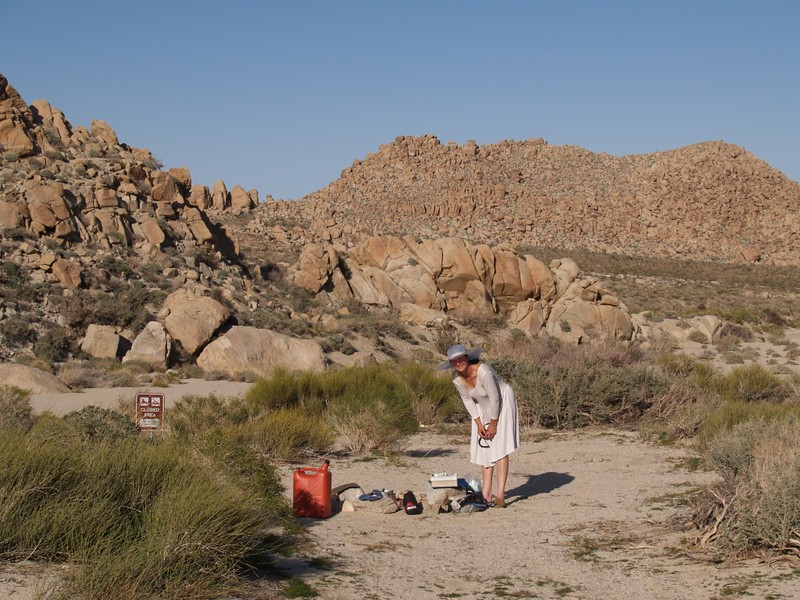 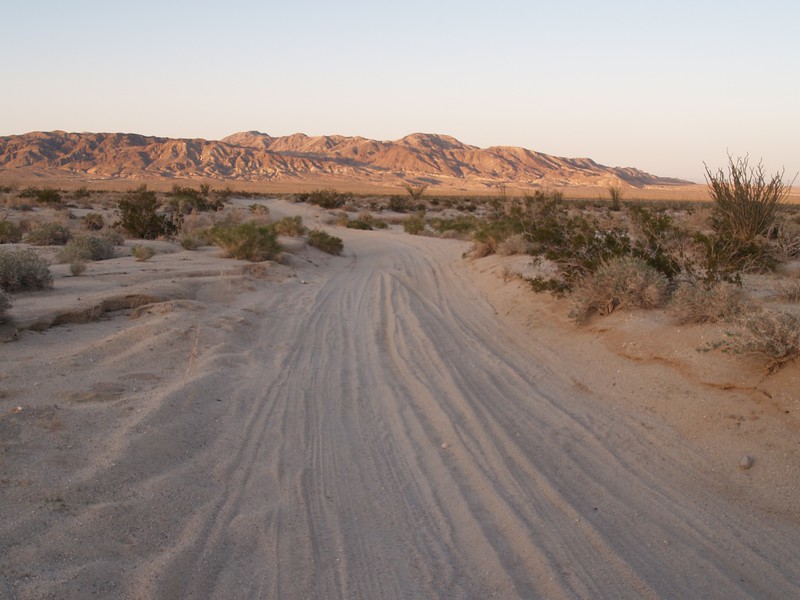 Driving out at sunset on Dos Cabezas Road

We spent the next hour driving the ten miles of dirt roads out to Highway S2, and by then the sun was truly setting. It had been an excellent weekend in the desert.

But one of these days I’m coming back to make it to the trestle!

For even more photos and videos see my Flickr Page.

For a topographic map of our GPS track see my CalTopo Page.