I’m not sure why, but we woke up at first light and were out of the tent by 6am.  Today would be the final day of our trek and we didn’t have very far to hike, only five miles or so, with all of it downhill.  So why did we wake up so early?  It made no sense.  Or did it?

On the one hand, we didn’t really want the journey to come to an end.  It meant jobs, work, bills, homes, and responsibilities.  Ugh!  That’s why we left in the first place!  We wanted to live simply and self-sufficiently, amidst scenic and natural wonders, far away from the crowds and hustle of the city.  And that’s exactly what we’d been doing.  We wished that this dream would never end.

On the other hand, we also felt that this trip couldn’t end soon enough!  We’d been wearing the same two sets of clothes, one by night and the other by day, for over a week.  We tried sponge-baths, we hand-washed our clothes, we hung them in the breeze to dry, but it couldn’t change the simple fact that we stank.  We fondly remembered hot showers and the smell of sudsy steam.  The feel of freshly laundered clothing.  And what about the food we’d been eating?  It was uniformly bland, this freeze-dried slop.  (Well, to be fair, it was actually quite good in the beginning, but we’d had enough of it by now.)  We were  lusting for more savory fare, for fatty grilled meat, for fresh crispy vegetables, and for ultra-salty french fries.  And ice cream.  Oh, ice cream!  We would sing the song of ice cream as we hiked back to civilization!

Maybe that’s why we got up so early. 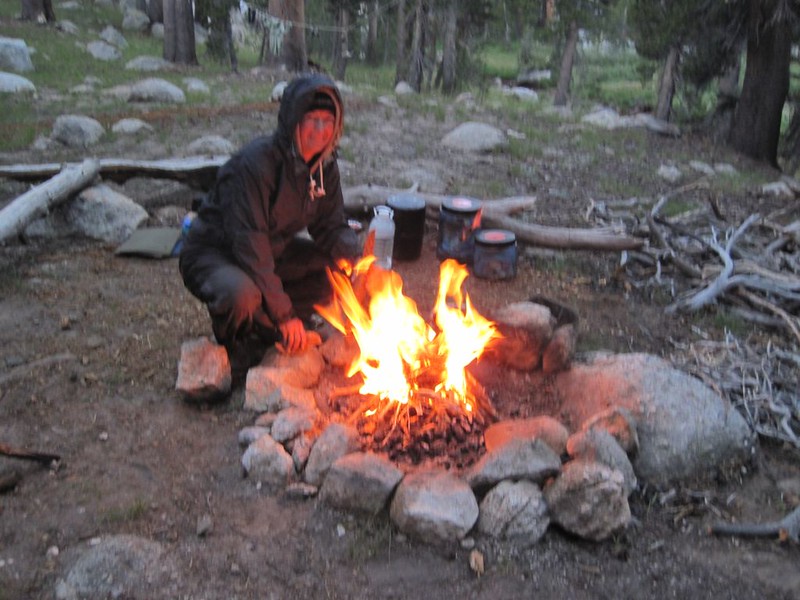 Vicki was up first, as usual.  When she got out there she discovered that the fire was still smoking a tiny bit, wisps escaping from under a half-burnt log.  She turned it over with a stick and there were plenty of coals under there!  So she grabbed some kindling and piled it on.  She called me and my big lungs for assistance.  As I blew on the coals I felt the heat increase, and soon the kindling burst into flames.  We piled on more wood and soon had another fine fire going.  It snapped and popped as we stood nearby, warming ourselves.  We hadn’t had a morning campfire in years, mainly because it was difficult to be sure that it was completely extinguished before we left camp.  We decided that the stream was close enough to thoroughly douse this one with minimal effort.

And I must say that sipping hot coffee by a campfire at dawn is a fantastic way to start ones day.

We dawdled a bit thanks to the fire.  I took photos and played with the camera.  We took in the remaining laundry from the clothesline.  We wandered down by the waterfall and set up the video for a remote shot of the two of us.  And eventually we got around to packing up our gear. 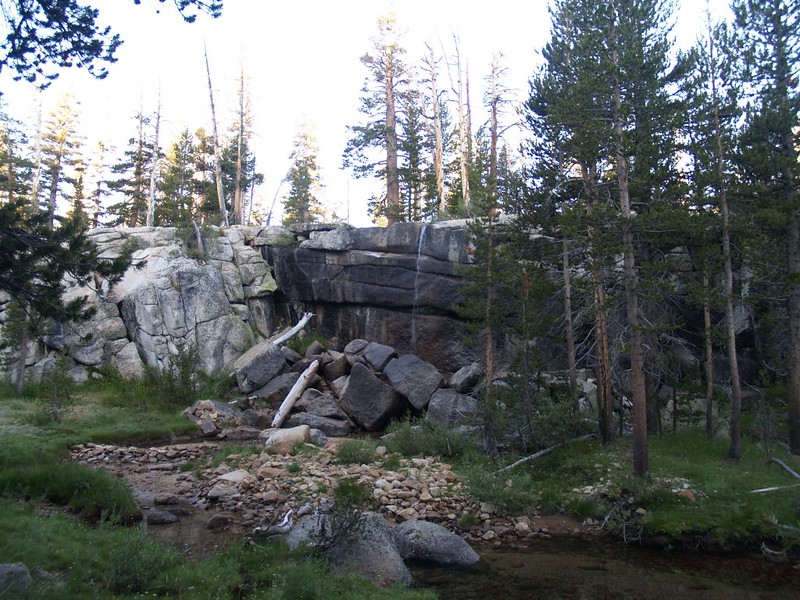 View of our waterfall in the early morning from our campsite 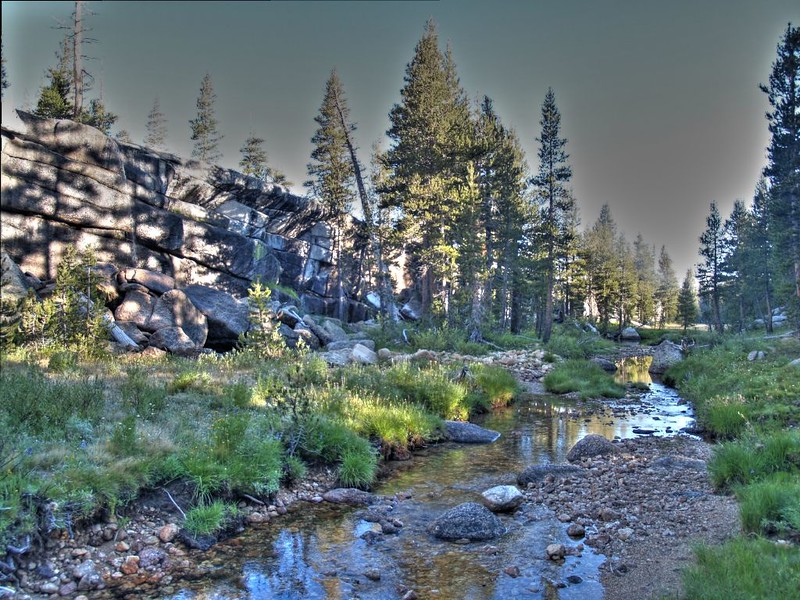 Posed video of Vicki and me in front of the waterfall

But even lazy mornings had to end sometime.  We put on our packs, said goodbye to our private waterfall, and started hiking.  We had no intention of hiking uphill, heading directly for the trail.  No, we would hike cross-country once again, following the stream downhill until it met the trail.  It was much greener near the water, and there were fun waterfalls and granite walls to scramble on.  We liked this part of Rafferty Canyon much better than hiking along the sandy trail where all the horses and mules left their stink.

But the trail was OK.  It wandered gently downhill through a pine forest, staying high above the stream.  After two miles or so it suddenly began switchbacking steeply downhill as Rafferty Canyon ended and the much deeper Lyell Canyon began.  We were losing all of that precious elevation we’d gained two days ago, the day of “Ramen Now!”  But we didn’t care.  This time we were travelling along at a great speed, singing of ice cream (of course) all the while. 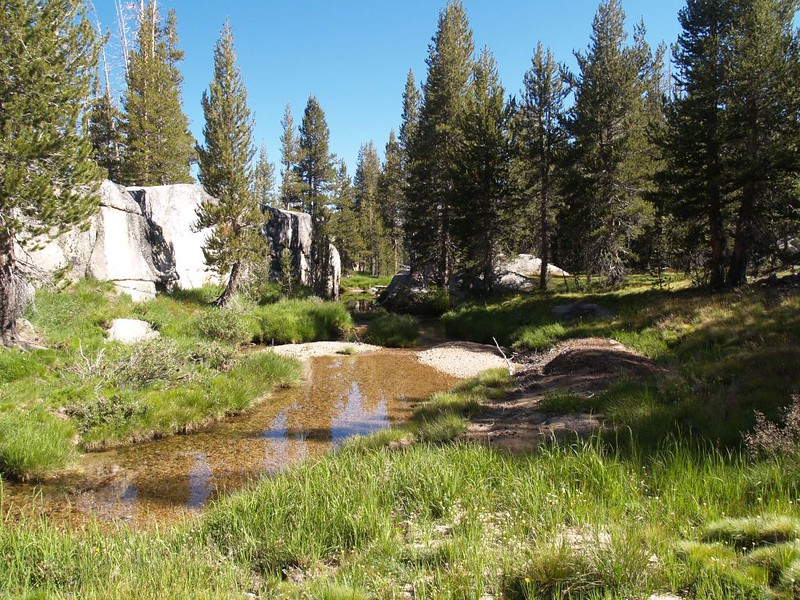 Video of Vicki straddling a waterfall 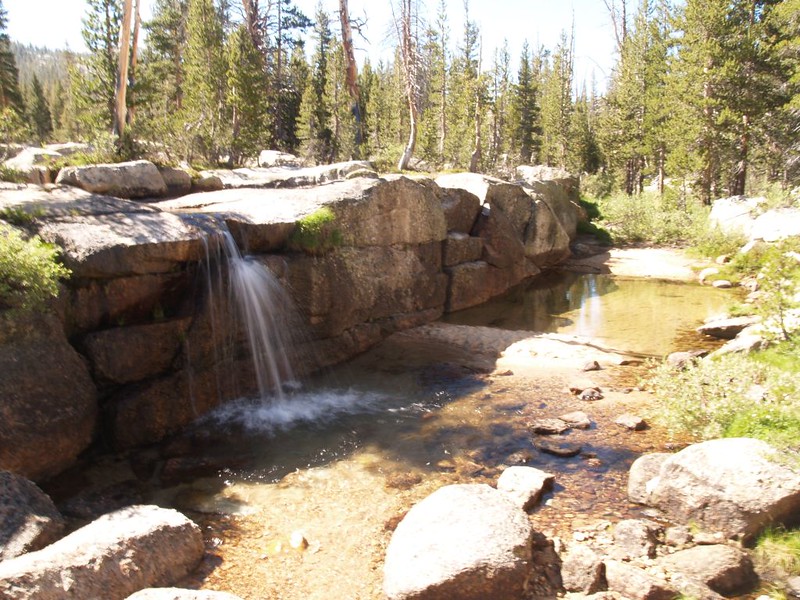 A waterfall and a granite wall 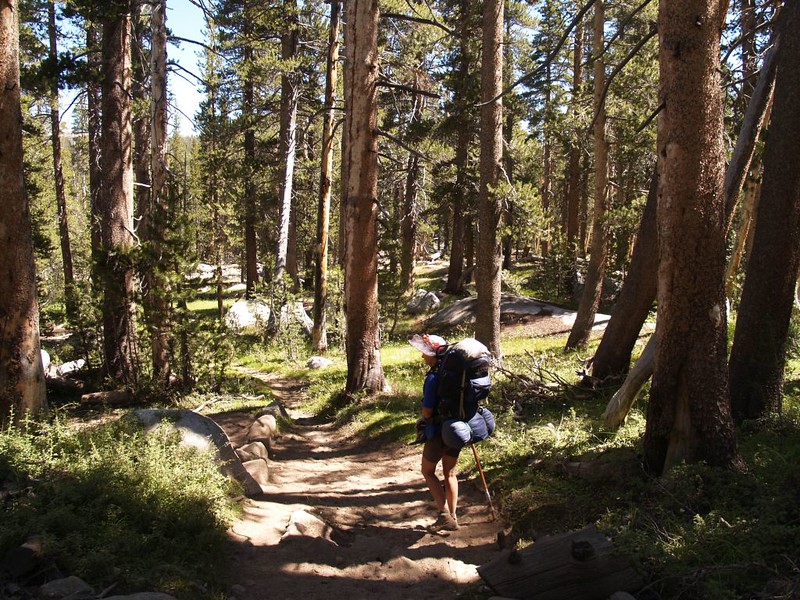 Back on the trail, hiking downhill through the forest toward Lyell Canyon

The trail intersected the PCT at the bottom.  We hung a left and kept on hiking.  It felt good to be back on the PCT, and Lyell Canyon was as beautiful as we expected it to be.  When the John Muir Trail continued straight, we turned right and crossed the Tuolumne River via two wooden footbridges.  It was an extremely scenic spot, so we stopped for a long break.  We ate some snack and watched the river go by.  We could tell, based on the increasing number of people, that we were nearing civilization, and we wanted one final moment to savor the peace of the wilderness.  We took off our shoes and relaxed on a granite slab by the stream.  Vicki took a nap and I read my book.  This was the life.  If it weren’t for the fact that we had eaten almost all of our food, I would have headed right back up that canyon.  It was that beautiful.  But then again, speaking of food, there was plenty of it less than two miles away.  The food won.

So I checked out the map on the GPS.  It said that the PCT swung north in a big semicircle, and that the shortest path to the car (and food) was via the JMT.  I mentioned this to Vicki when she woke up, and she voted overwhelmingly to backtrack a bit.  We got ourselves ready and started hiking.  This was it:  The home stretch.  We vowed not to stop until we made it back to the car.  We could almost smell the burgers sizzling on the grill. 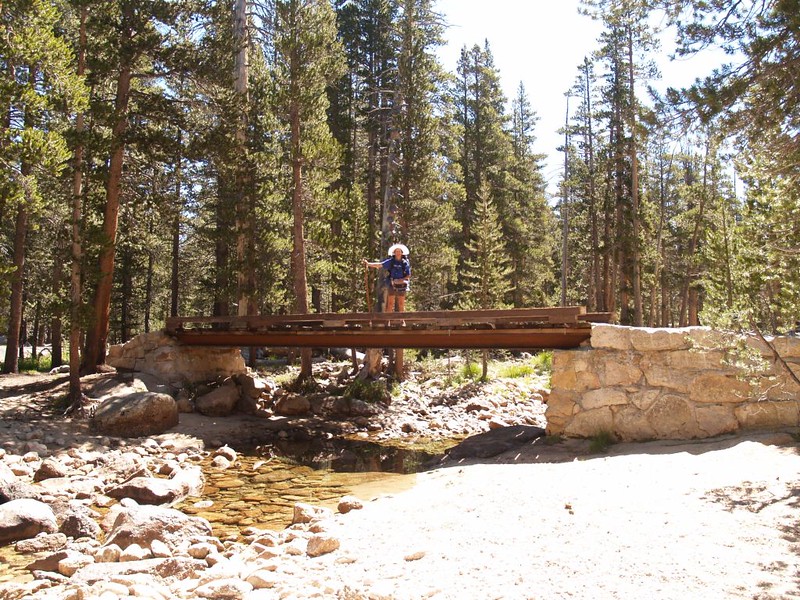 Video of the Tuolumne River in Lyell Canyon 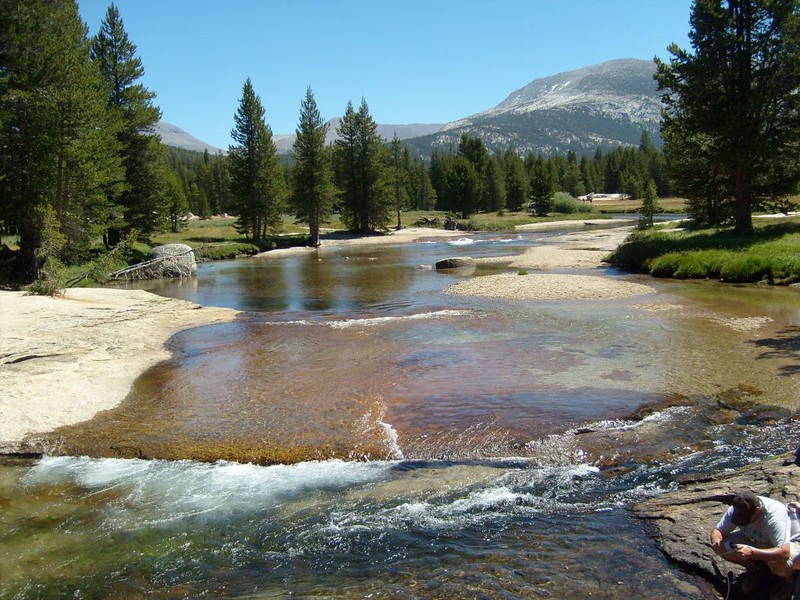 The Tuolumne River flowing over granite slabs in Lyell Canyon. We took a big rest here.

The Tuolumne River gets shallow and wide

The Tuolumne River as it approaches Tuolumne Meadows

We were glad that we took the riverside trail.  The views were great.  The lupines were blooming everywhere, their candy-like scent in the air, and the grass was thick and lush.  As we neared the Tuolumne Meadows Campground, we saw more and more people enjoying the water.  Some were fishing, others wading.  There were whole families having picnics along the shore.  Children’s voices traveled over the water as they played in the shallows.  It was a perfect Summer day in Yosemite. 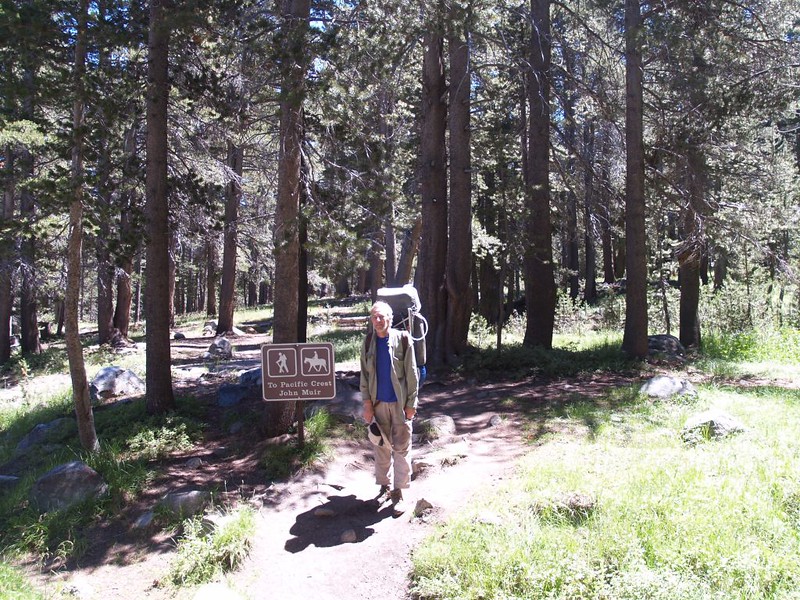 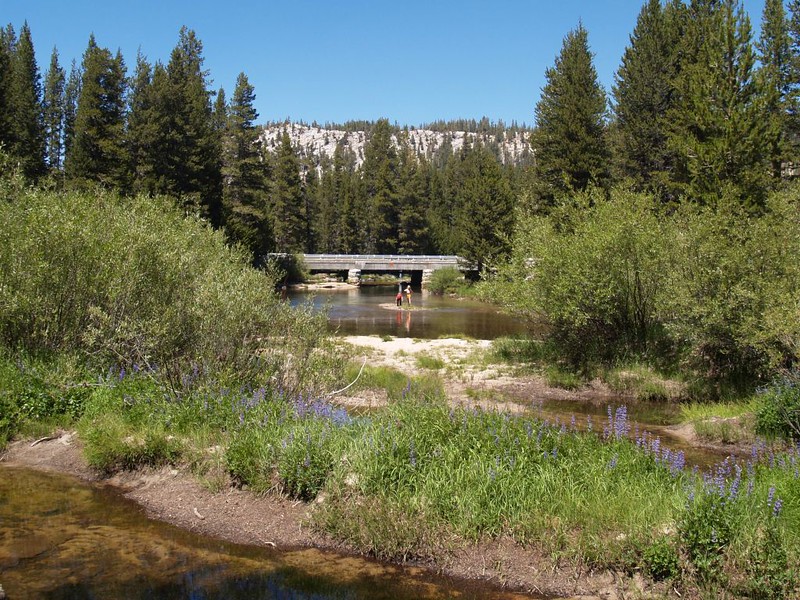 We see the Highway 120 bridge over the Tuolumne River. The car is just beyond.

All too soon we were back in familiar territory, hiking through the campground, back where were started nine long days ago.  We came to the highway and stopped for a moment.  Did we want to hike to the left, directly toward the Tuolumne Meadows Grill, or would it be better to turn right and head for the car?  The grill would mean tasty food as soon as possible, but would require more total hiking, as we would have to backtrack afterward to get to the car.  Alternatively, we could always put off the food and be lazy, driving directly to the grill.  Laziness won out.  We didn’t want to carry those heavy packs even one foot more than we had to.  Our feet were hot and sweaty, and the grill wasn’t going anywhere.

We hiked across the bridge to the dirt road by Lembert Dome, and headed to the car.  But what had happened to it?  It was absolutely caked with dirt!  It was the same color as the road, and when other cars drove past we saw the dust clouds they left in their wake.  Nine days of dust clouds had created a granite-powdered mess of our car.  We couldn’t even see through the windshield!  We put our gear in the trunk and closed it, and a cloud puffed up.  Vicki started it up and tried the wipers using the car’s supply of window washing fluid, but all we got was a muddy mess.  Yuck!  We opened the trunk and got out an old towel, along with a bottle of drinking water.  Then she got down to business and cleaned them all.  Meanwhile, I walked over to the bear-proof storage bins and retrieved our extra food, which had enough snacks to get us back home.  When I returned the car was still unbelievably dusty, but at least we could see.

We got in the car and I started opening a bag of chips, but Vicki stopped me with two simple words:  “Ice Cream!”

I instantly got a glazed look in my eyes, and the corners of my mouth began to curl upward in a smile.  “And hamburgers.  And fries.  What are we waiting for?  Let’s go!”

And so we went.  We were parked at the grill within five minutes.  We stood in line, placed our orders, and waited for the food.  It smelled great in there, and it overcame our initial aversion to the jostling of the crowds of people.  We weren’t used to all of this humanity with its incessant yakking, with its stinky perfumery, and with its sheer effrontery of standing in line ahead of us, blocking our way to the food counter!  How dare they?

It didn’t take long to get our food.  I poured salt all over the french fries, then headed to one of the tables outside, where we began our post-hike food orgy.  It was all about the meat, the salt, the grease, and the vegetables.  And it all tasted great.  We smacked our lips and smiled big smiles.  It was good to eat.  As I sat there afterwards, completely mellow, popping a few last bits of fries into my mouth, Vicki got up and left, saying that she’d be right back.  That was fine by me.  I wasn’t going anywhere.  She came back holding a vanilla Frosty Cone!  It was already melting and she was licking the drips, swirling the cone in her hand like a child.  I woke from my stupor immediately.  Ice cream was what I truly craved.  Vicki handed me the cone and I popped the top bite of the soft creamy goodness into my mouth.  Ahhhh!!!  That’s exactly what was called for.  We passed it back and forth, savoring the flavor, until the last bite of cone was gone.

Here, at last, was reason enough to return to civilization. 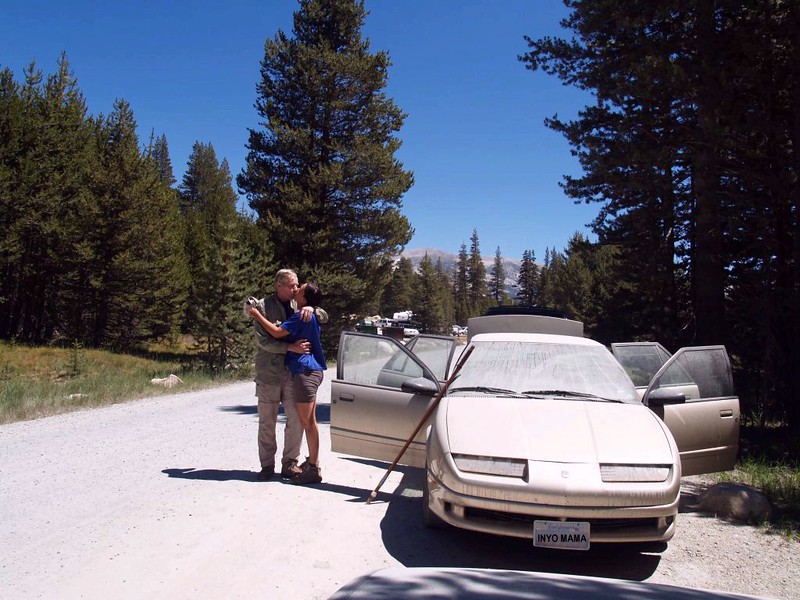 Trek complete! We make it back to our incredibly dusty car on the dirt road near Lembert Dome 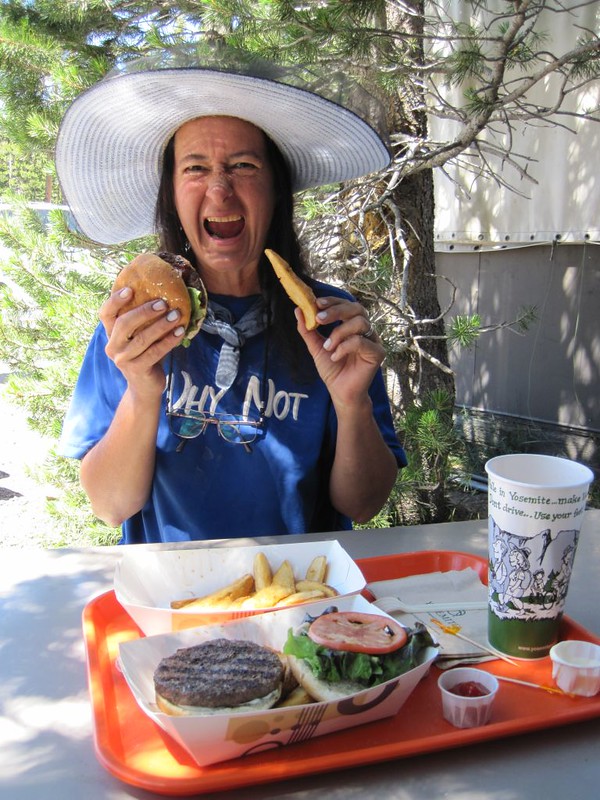 Our reward: Burgers and salty fries at the Tuolumne Meadows Grill. With ice cream for dessert!

For more Day 9 photos and videos see my Flickr Page.

For what I consider to be the best photos and videos of the entire trip see my Flickr Page.