I spent a day acclimating to elevation by hiking a ten mile loop out of Horseshoe Meadows.  I began by climbing up to Trail Pass, hiked along the Pacific Crest Trail to Cottonwood Pass, and then descended to the trailhead, completing the loop.

Of course, it all started at 2am, when I left San Diego for the five hour drive to Lone Pine.  My plan was to pick up a wilderness permit for the next day.  I got there for the opening permit lottery and discovered that they don’t issue permits for the following day until 11am.  So I had three hours to kill.  I drove to Whitney Portal and discovered that the store’s kitchen didn’t open for lunch until 11:15, so I then headed back to the Ranger Station and waited around.  It just wasn’t my day.  At 11am I got my permit, and then, finally, was able to drive all the way up the big hill to Horseshoe Meadows.  I picked a spot in the Backpackers Camp and set up my tent.  I was set for the night, and by morning I would at least be partially acclimated.

After that, it was time to hike.  Too bad it was already 2pm!  What a waste!  I had planned to spend the entire day hiking a very long ten-mile loop, but starting this late on such a big hike seemed a bit unwise, especially as I would be hiking solo.  So I lowered my expectations and decided to hike to Trail Pass and back.  I had never been there before, and and even a short hike is better than no hike.  So I grabbed some gear (not my full ten essentials, as that was in my big backpack) and stuffed it into my daypack.  Then I drove around the corner to the trailhead and started hiking. 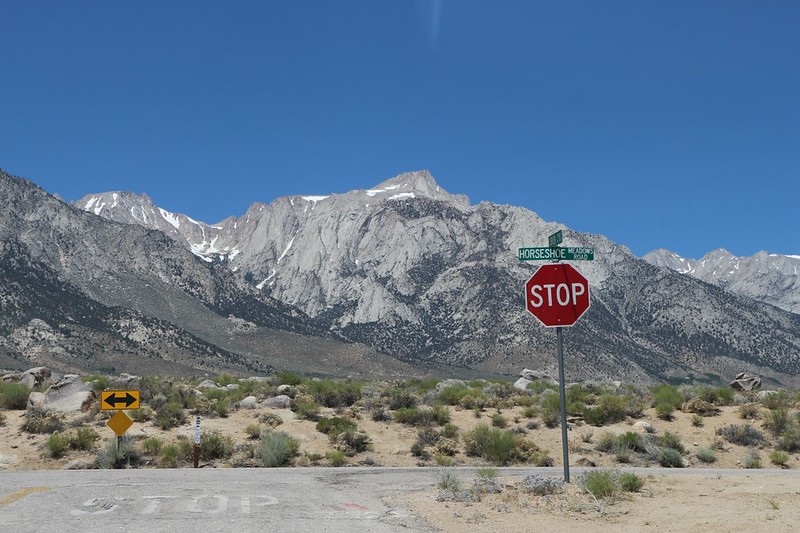 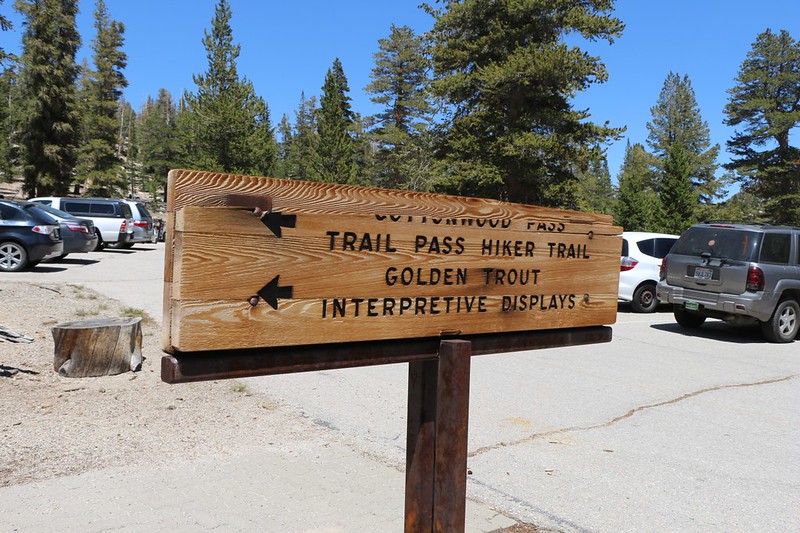 I hung a left onto the Trail Pass Trail and crossed Horseshoe Meadows.  The creek was flowing and everything was green and vibrant.  Soon enough, the trail entered the forest and began climbing in earnest.  As I climbed I discovered places where there were views of the surrounding area, north to Mount Langley and down into Horseshoe Meadows where there was some Spring flooding going on.  That area looked like “Mosquito Central” and I was glad I was way up here in the breezy forest.

I was feeling good and hiking strong.  I built up quite a sweat.  It was a great workout.  Even though I was up near 11,000 feet I wasn’t noticing any signs of altitude sickness.  I was breathing deep but that was normal when hiking hard and my body felt great.

And the Sierra Nevada was beautiful, as always. 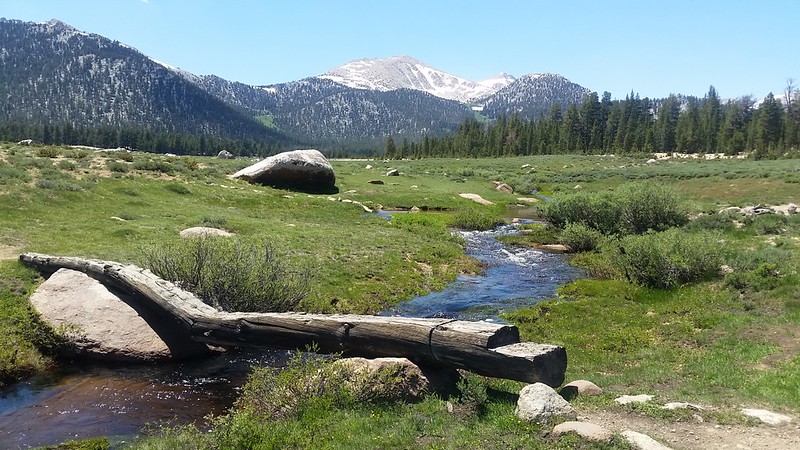 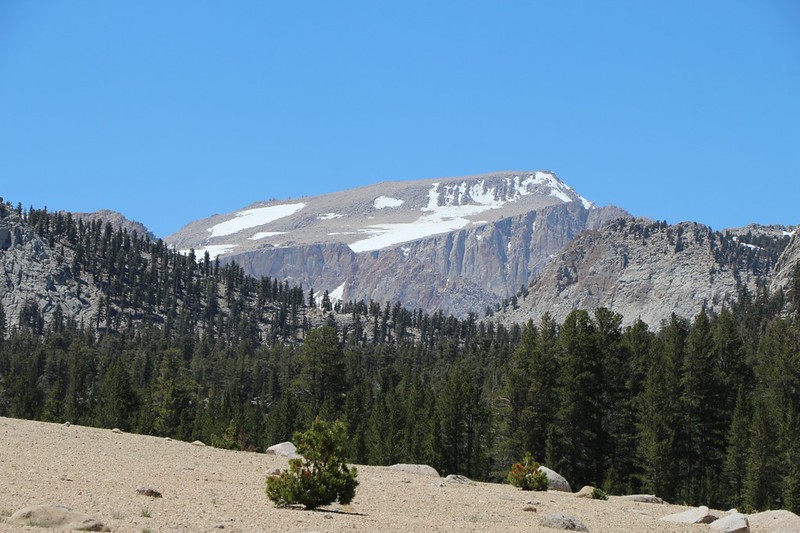 Zoomed-in shot of Mount Langley from the Trail Pass Trail 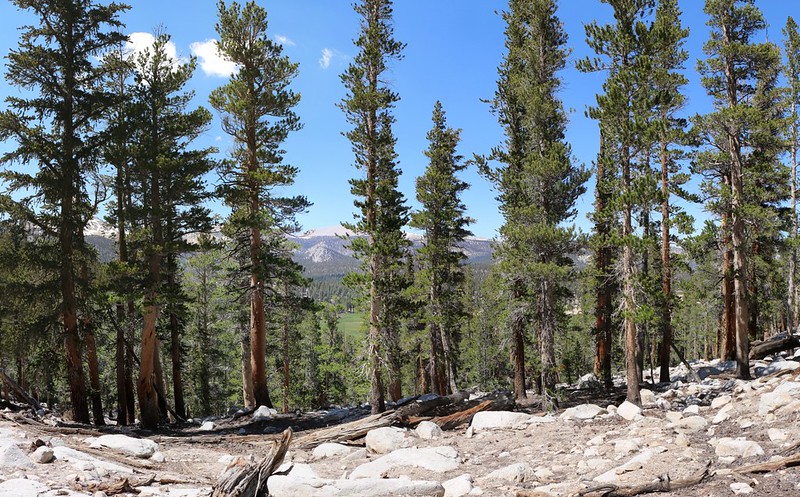 Lines of pines with Horseshoe Meadows down below 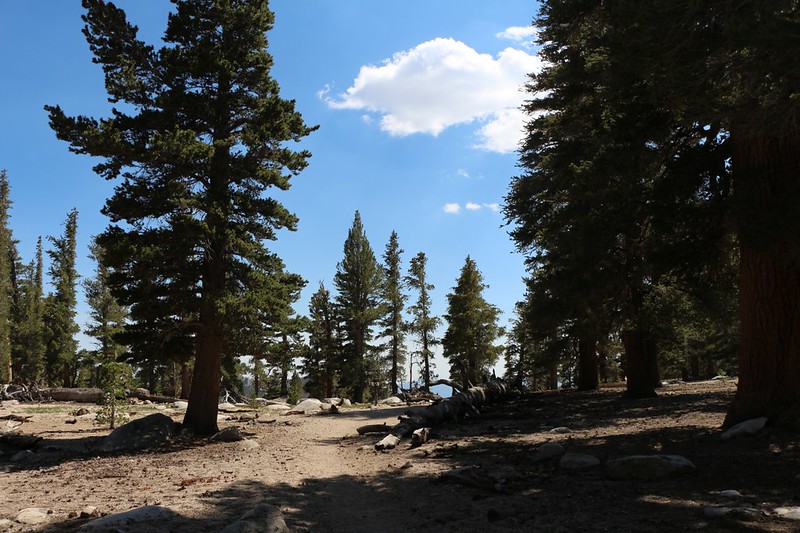 When I reached Trail Pass, I checked the time and discovered that it had taken me less than an hour!  It was only 3pm or so, and I was still feeling great.  So I pulled out the map and contemplated what to do next.  Going back to camp was easy enough, and since it was downhill I surely would be there before four.  But sunset wasn’t until 8:30 or so.  The original ten mile hike was still a possibility if I could manage to do it in time.  The map showed that next section of PCT appeared to stay relatively level for five miles, and then there were over three more miles of downhill on the Cottonwood Pass Trail before I made it back to the car.  Could I do it?  Should I do it?  True, I was feeling great right now, but would it last?  I decided to give it a shot anyway.  As a PCT Section Hiker, it was nearly impossible for me to turn down a chance to hike an as-yet-unhiked section of the trail.  I knew full well that I’d be kicking myself later on if I wimped out now.  So on I went.

And the PCT was beautiful, as always.  Plenty of tall trees and tons of great views.  The map didn’t lie, either:  It was almost flat, traversing gently alongside the Sierra Crest.  At first I hiked along the side of Trail Peak, which wasn’t much more imaginatively named than Trail Pass.  Then it crossed to the west side and provided plenty of views in that direction.  Very nice.  The hiking was super-easy, and I continued to feel great the whole way.  I stopped for views and snacks as the occasion arose, and made sure that I stayed well-hydrated.  I also kept my eye on the clock, as I knew that it I wasn’t halfway done by 5pm I’d be hiking back in the dark.  But that never became an issue.  I was hiking fast. 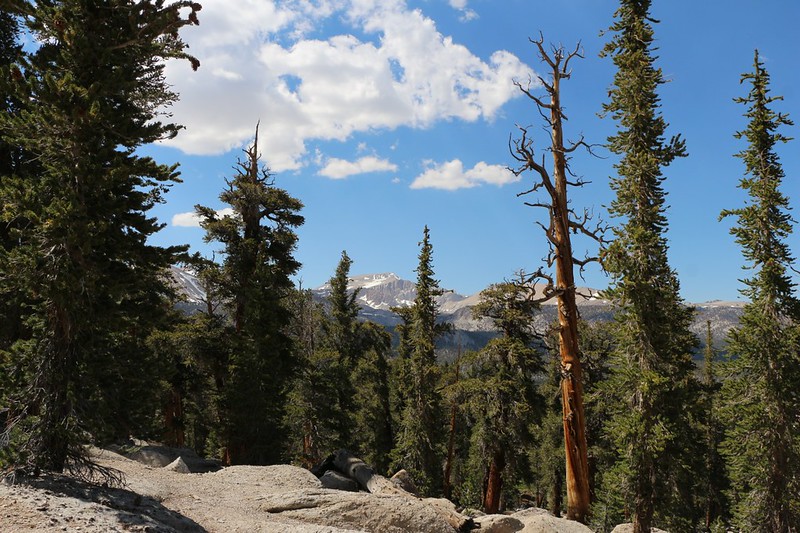 Mount Langley in the distance from the Pacific Crest Trail 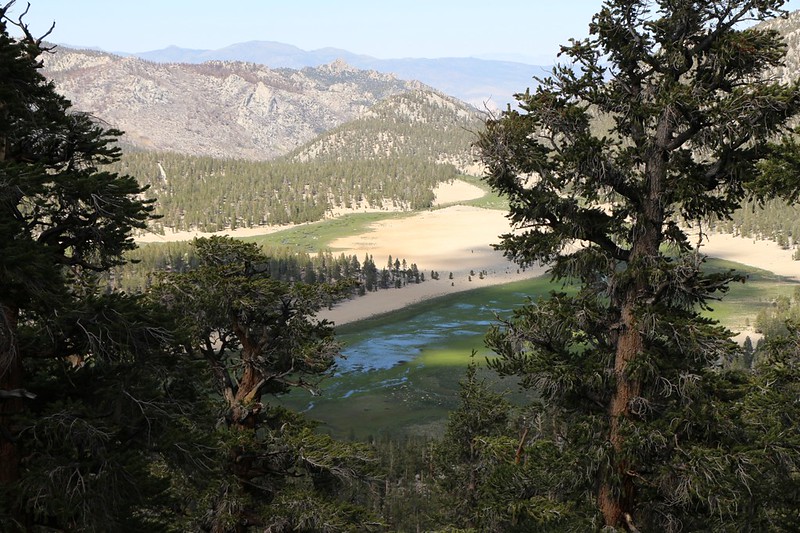 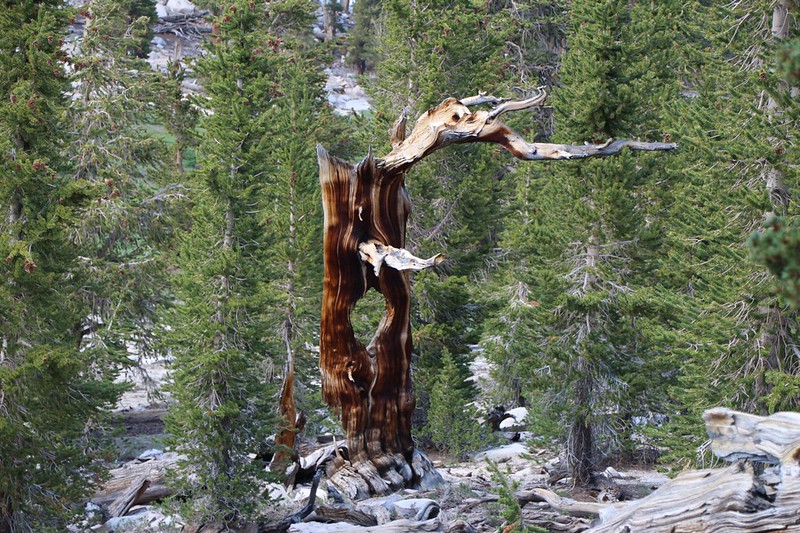 Funny-looking stump on the PCT north of Trail Peak 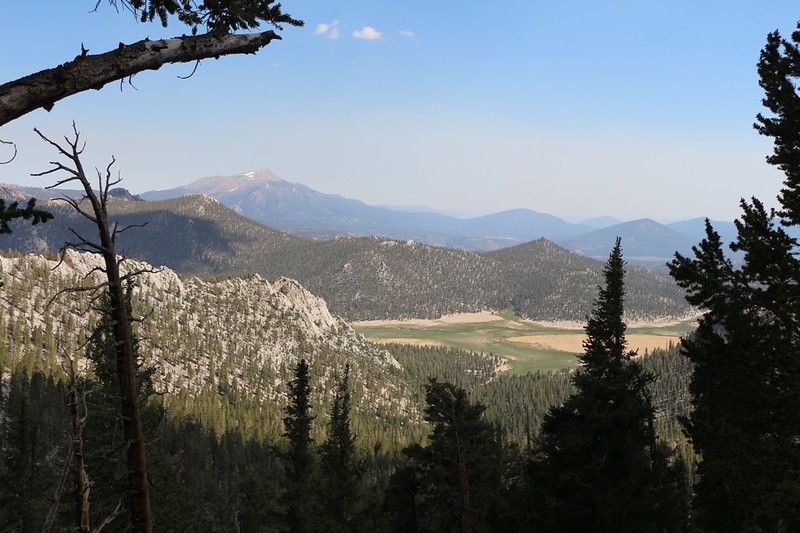 Olancha Peak and Mulkey Meadows to the south 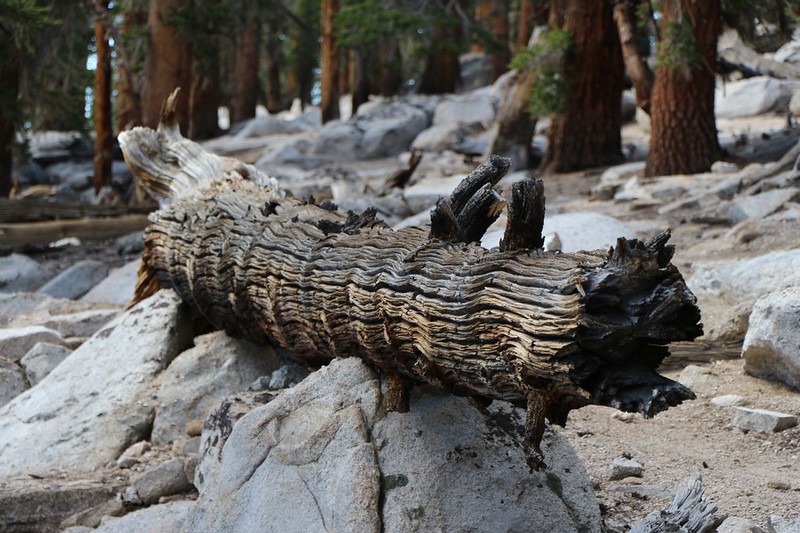 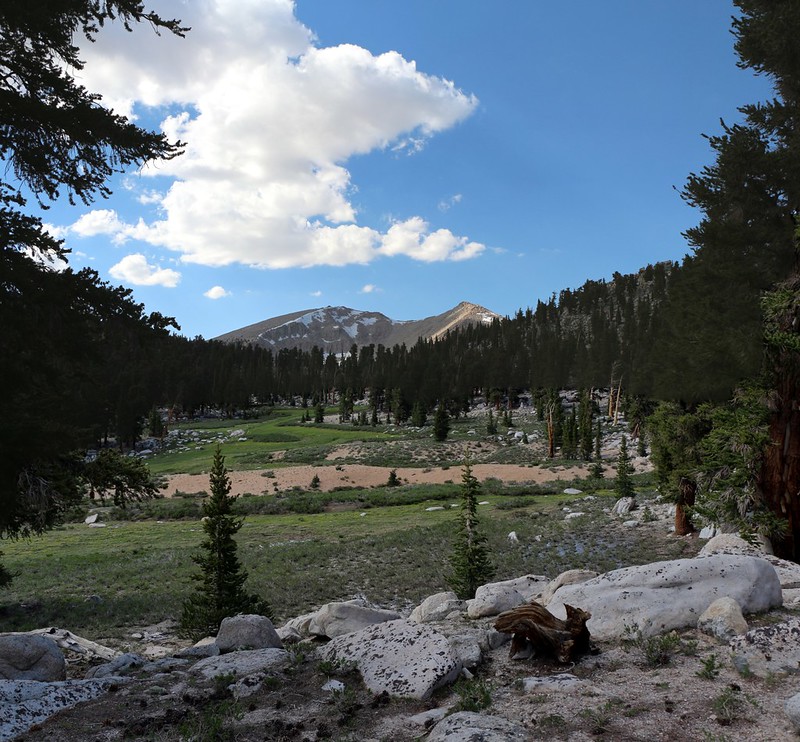 Trailmaster Peak across a meadow. My next destination, Cottonwood Pass, is just to the right of it. 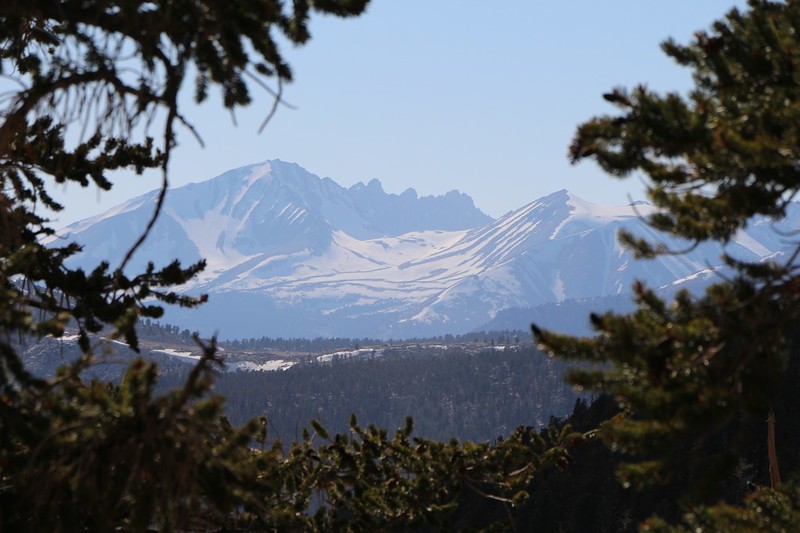 Mount Kaweah, Red Kaweah, and Black Kaweah in the distance to the west, in Sequoia National Park 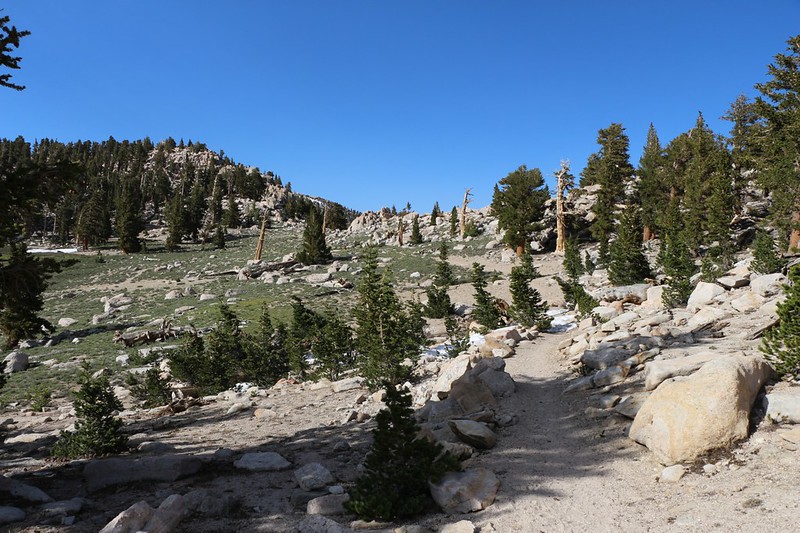 Cottonwood Pass is just ahead. The PCT continues northward to the left, but I turned right over the pass

I arrived at the pass just after 5pm.  I’d hiked a total of 6.9 miles and had another 3.7 left to go.  And most of the 3.7 was downhill, so I wasn’t too worried about needing my headlamp.  But I have to admit that my legs were beginning to show signs of fatigue at this point.  My raring-to-go attitude had turned into its opposite:  The ready-to-rest lassitude.

So I sat down on a boulder and took a well-earned break.  I knew that my muscles needed some fresh fuel, but I hadn’t brought enough snack for such a long hike.  The updated plan had been a quick there-and-back to Trail Pass, so I didn’t think I needed much food at all, and now I was back on the original plan, but poorly prepared.  My muscles would have to do without the food.  I tentatively squeezed my water bladder and it, too came up a bit short.  I had less than a liter left, of the two and a half I’d started with.  There was water melting and flowing everywhere, but, naturally, my water filter was safely packed away in my big backpack, ready for tomorrow’s hike.  The sad truth is that water filters don’t work if you don’t have them with you.  I kicked myself for not grabbing the full ten essentials before I left, but kicking oneself doesn’t change anything; I had no choice but to make it back to the car with what I had on hand.  I suddenly began feeling thirsty, even though I knew that it wasn’t true, and I thought longingly of those cans of cold soda in the trunk of the car.  Water AND sugar was exactly what I needed.  No such luck.

So I got up and started hiking.  There was finally a bit of snow at the pass, the remains of what must have been a mighty cornice, but which was now a rounded, melting pile on the east side.  The trail climbed right over it, so that was fun.  But the snow didn’t last long at all.  After that there were lots and lots of switchbacks as the trail descended, and I made short work of them.  Easy hiking, even with tired legs.  But after that came the long flat section, which barely sloped downhill at all.  There was a stream flowing along there, and it was running high.  There was mud.  There were trees and soggy little meadows.  The sun began to sink behind the mountains and the forest shadows got long.  And the trail went on and on.

I got tired for real this time.  I needed a rest.  So I sat down on a dry patch of sand,  I drank the last of my water as I checked my GPS.  I had less than a mile to go.  I’d be fine.  But I knew that I’d be much happier if only some energy would arrive in my legs.  I knew that if I waited long enough my body would eventually convert some fat into readily-burnable carbs.  I looked around me.  It was peaceful here in the woods.

And then I heard that unforgettable sound.  The sound of high pitched whining.  The sound of bloodsuckers hunting me.  Skeeters!  Unfortunately, the mosquitoes didn’t care that my blood had no carbs left in it.  They wanted it all.  And that was when I kicked myself again, the moment I realized that my DEET bug repellent was safely stowed in my big backpack in the trunk of my car!  Arrrgh!  I really didn’t want to get up, so I swatted a few that tried to land on my face and hands, and took a photo of another sitting on my knee as it contemplated drilling through my thick denim pants.  But my rest couldn’t last.  That whining sound took all the joy out of it.  I got up.  Carbs or no carbs, I wasn’t going to sit around and get eaten alive.  So on I hiked, walking just fast enough to stay ahead of the cloud of mosquitoes that were following in my wake.  Voracious!

Horseshoe Meadows is far below under cloud-shadows, viewed from the snow berm on Cottonwood Pass 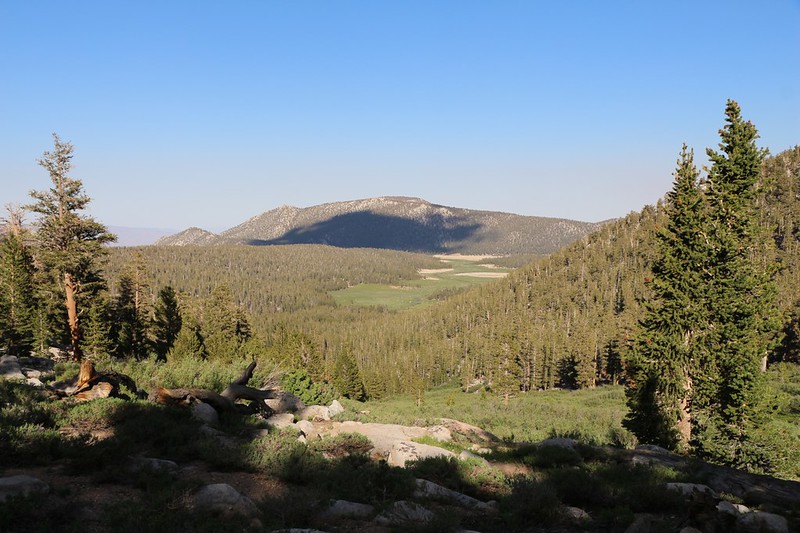 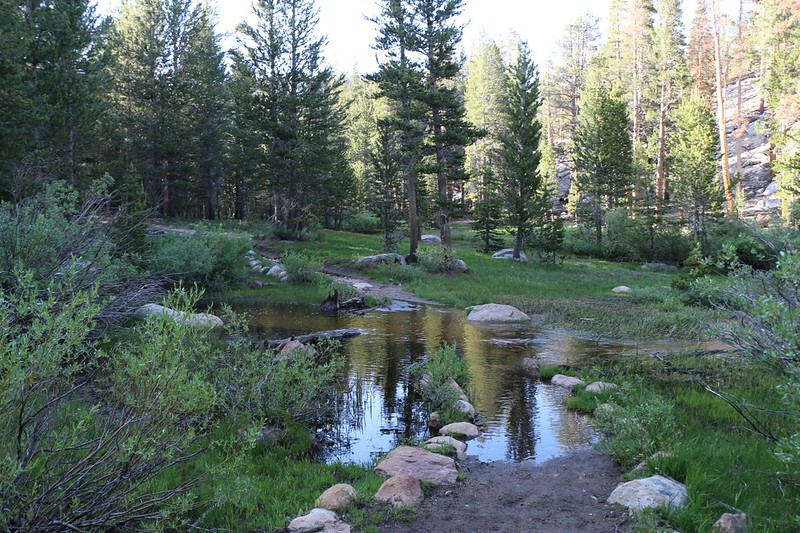 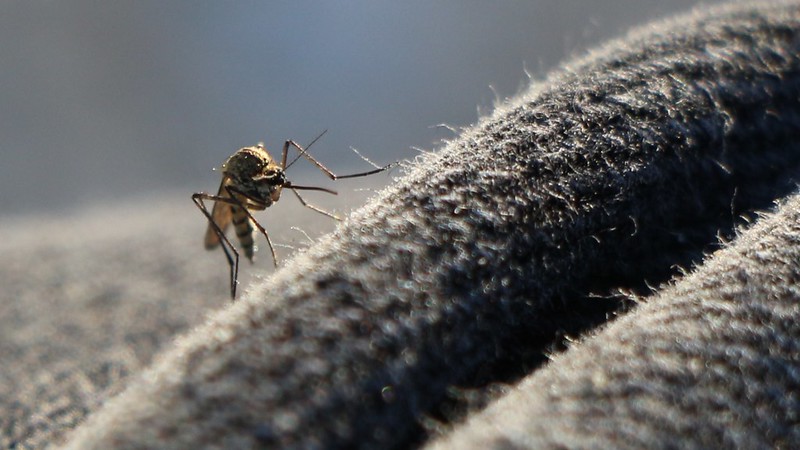 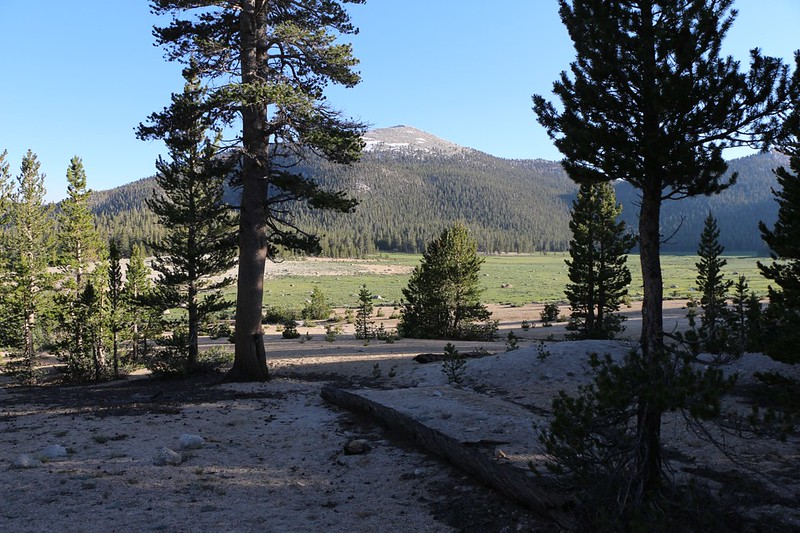 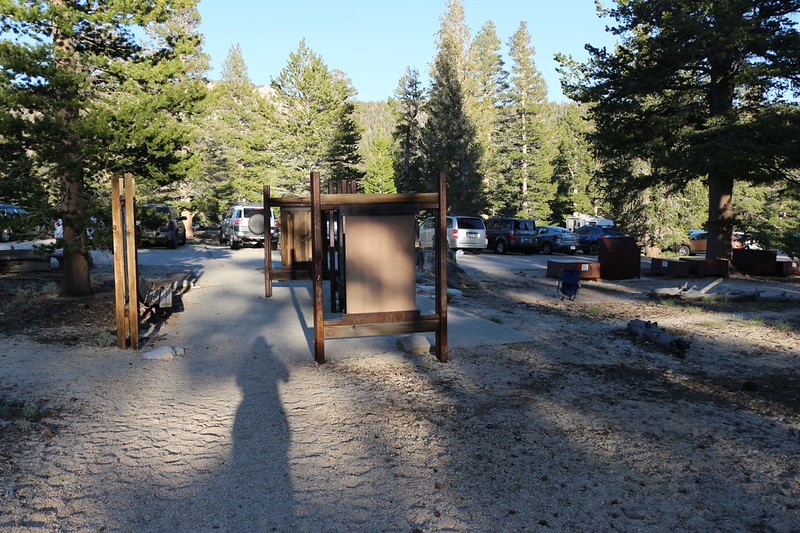 Back at the Cottonwood Pass Trail trailhead and parking lot

I made it back to the trailhead and opened up the car.  I threw the pack in the back seat and jumped inside, but not before grabbing a can of soda from the trunk.  I sat down, popped it open, and drank the sweet awesomeness.  Ahhh!

But not until after I killed one final impudent mosquito that dared to sneak into the car with me.

All in all it had been a really good hike.  I had only met four people all day, and not a single PCT Through Hiker.  I figured that the PCT crowd must have bypassed the Sierra Nevada this year due to the record snowpack.  But I hadn’t seen much snow that day, and I was hiking along near the 11,000-foot level.  Maybe they were afraid to try it after reading some of the horror stories of the past month.  Plus, I figured the snow would be worse as one headed north, so maybe they made the right decision.  But I’m sure glad that I got to hike this section all by myself.

For more photos and videos see my Flickr Page