After last week’s excellent hike in the local mountains, we decided to try another: The Volcan Mountain Wilderness Preserve in Julian, California.  We wanted to take another hike in the local mountains right now, in the Spring, before the weather got too hot.  Plus, everything would still be green and flowering after all the rain we had last Winter.

So we left our house well before dawn in order to arrive at 7am when the park opened, hoping that we could finish the uphill portion of the hike before the temperatures rose too high.  This time, however, I think we timed it a bit too perfectly, as the thermometer at the trailhead kiosk showed it to be a chilly 33 degrees!  Indeed, when we first got there we stepped outside of the car and were rather shocked at the cold.  We immediately dug into our supplies and got out some extra clothing, including our rain pants, wool caps, and gloves.  Brrr!  Then we jumped back in the car and blasted the heater while we added the extra layers of insulation.  Just the same, we knew that the best defense against the cold was to start hiking!  Uphill, if possible.  And that’s exactly what we did.

The preserve’s parking area is right on the side of Farmer Road; there is no dedicated parking lot.  You have to walk down a gravel road until you come to the official entrance.  There were private homes along the lane, so we crunched past them quietly in the early dawn.  After we admired the stonework and the well-made wooden and metal signs at the entryway to the park, we discovered that the way forward had became a simple dirt road.  Uphill, of course.

As it ascended, the road traveled through a pleasant oak forest, and the views got better the higher we climbed. 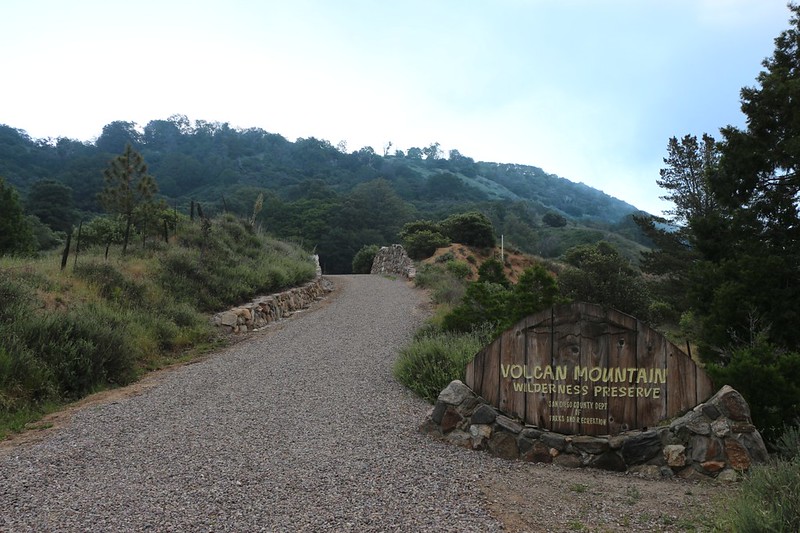 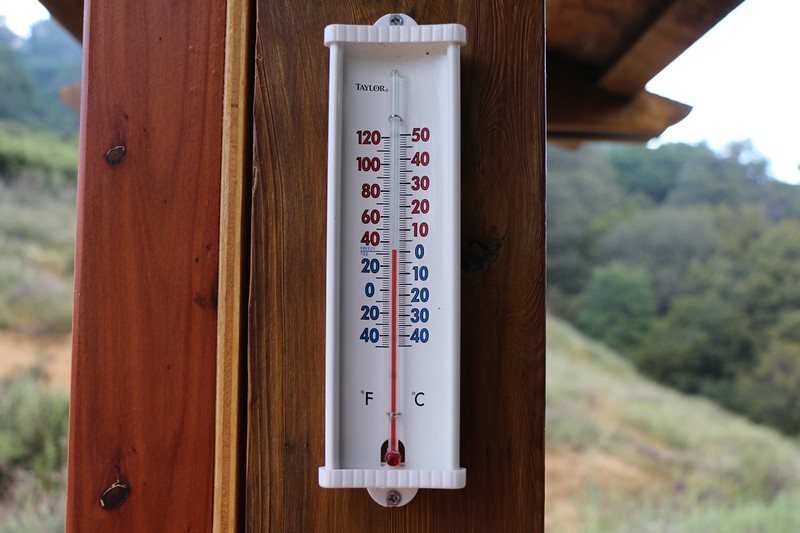 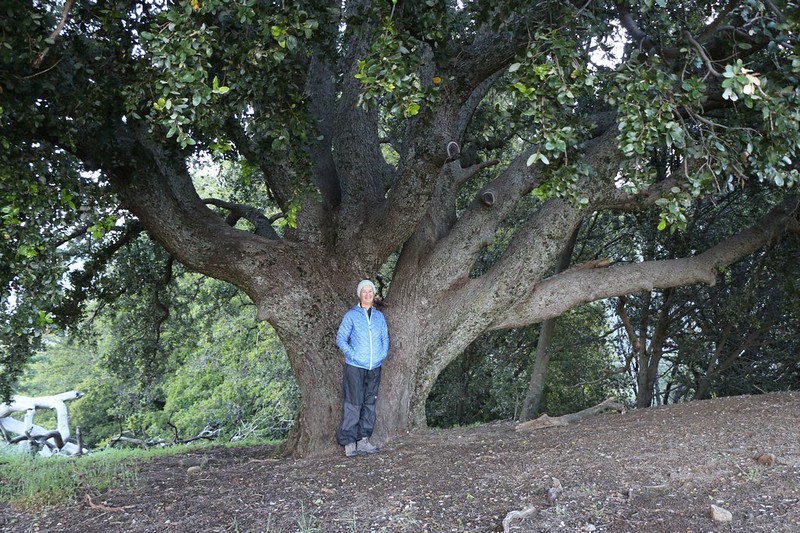 Vicki standing next to a huge old oak tree 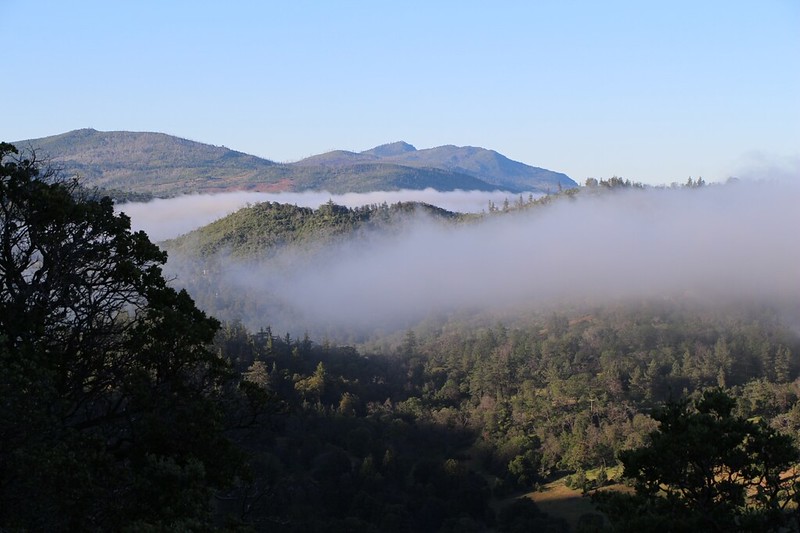 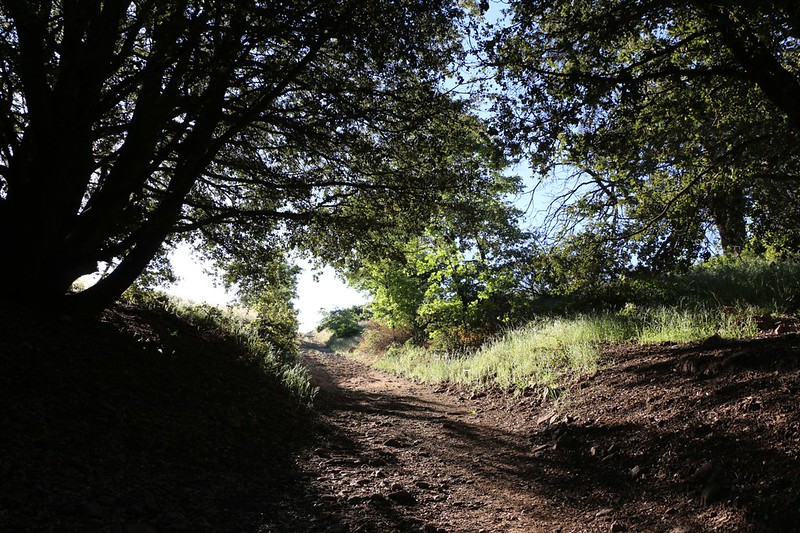 The shady trail emerges into sunlight 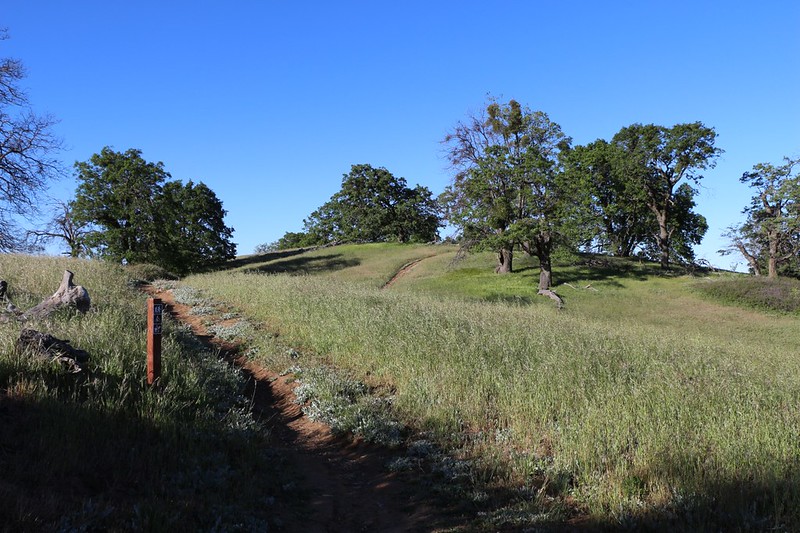 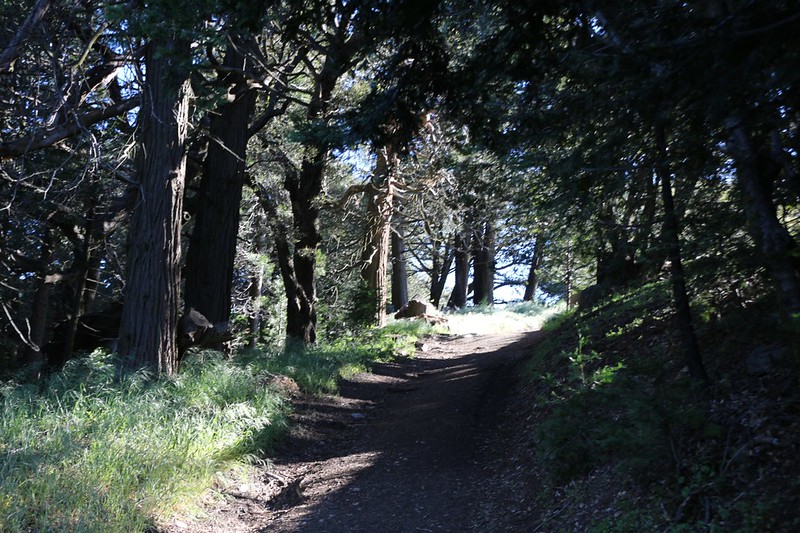 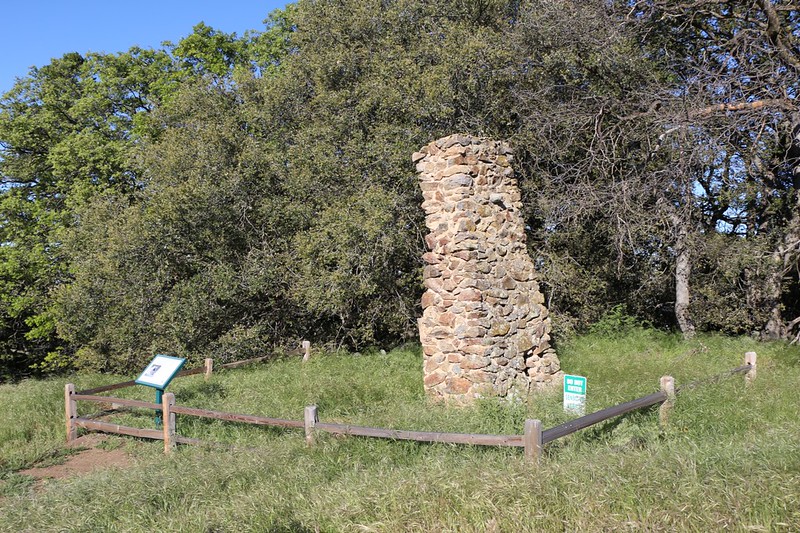 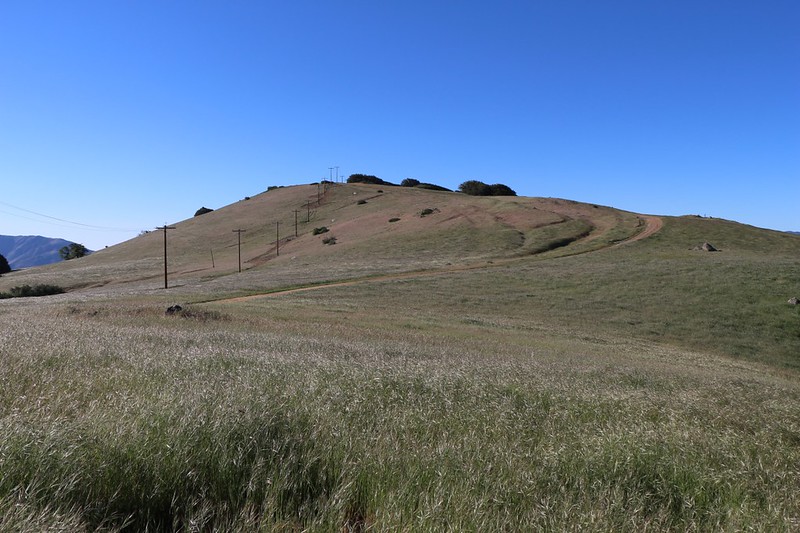 View toward the Volcan Mountain Summit

Soon enough, we warmed up and had to take off our extra layers.  It was turning into a sunny, yet cool, day, just perfect for hiking.

The trail followed the road and was easy to climb.   Eventually it reached the high north-south ridge of Volcan Mountain.  The way to the north was closed, but the official summit to the south was open.  The peak was visible once the trail broke out onto the high grassy expanse of the ridge.  And this was also where we began to feel the westerly breeze.  The wind was strong up here!  The grasses were waving, wind-patterns traveling across them, their heavy seed-tops bobbing and whipping around.  We had to put our windbreaker layer back on, as the cool breeze was driving through our clothing and chilling us once more.  It was invigorating to lean into it, to feel the power of the wind rushing past your face and pushing your body back.  Fun!

We continued hiking upward to the top, and took in the views all around us.  Cuyamaca Peak and the Laguna Mountains were to the south, San Diego and the Pacific Ocean to the west, San Jacinto Peak to the far north, and the Anza-Borrego Desert to the east.  The San Felipe Hills, where we’d hiked on the PCT back in 2013, was just across the valley.  We tried our best to figure out which spot had been our campsite, but it proved impossible.  I was only able to find it later on, at home, via my photos from the summit and with the help of Google Earth.

Panorama video from just below the summit of Volcan Mountain 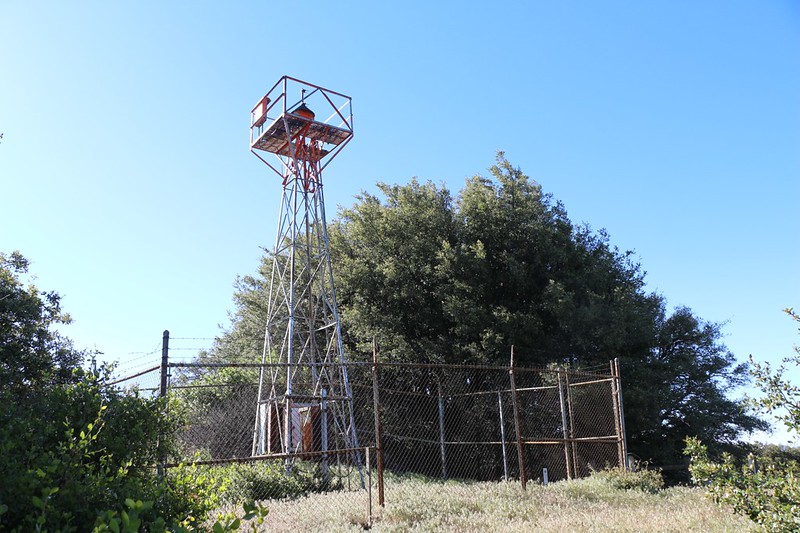 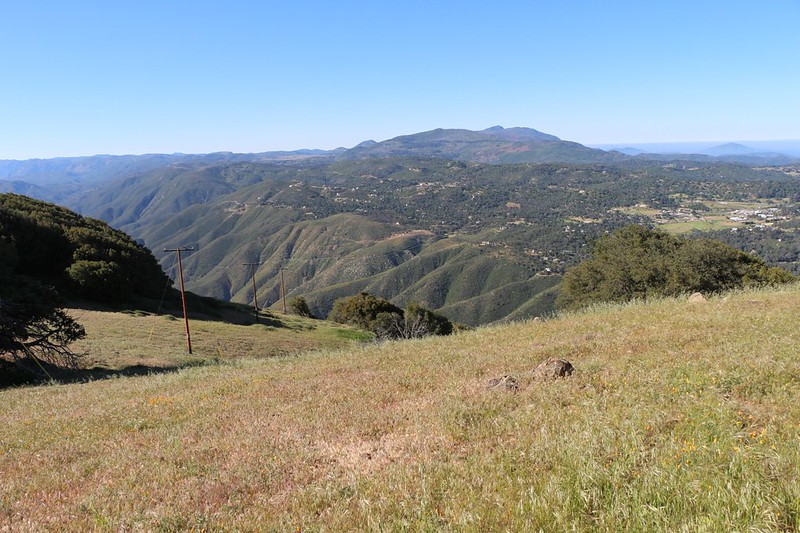 View south from the summit, with Cuyamaca Peak right of center and Banner Canyon down below

After a nice snack-break, sitting on a beautifully-carved wooden bench on the summit, we decided to head back down.  This time, however, we would leave the road and take a detour on the Five Oaks Trail.  According to the park’s website, there were five distinct species of oaks growing along this path.  I wish they’d given out brochures to help us identify them, but we only knew two or three.  We certainly noticed the Poison Oak that cropped up along the path, but that one didn’t really count as an oak.  We just kept our distance.  This was a real trail, unlike the wide dirt road, so it was fun to hike, and had better views. 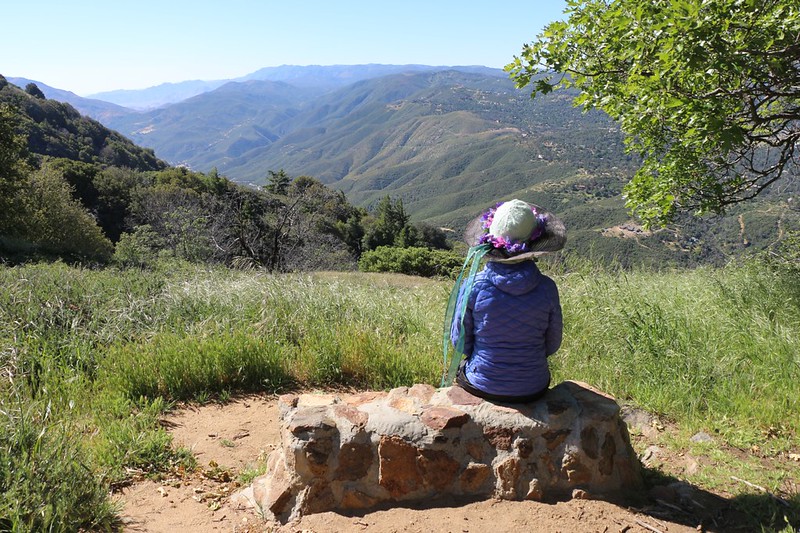 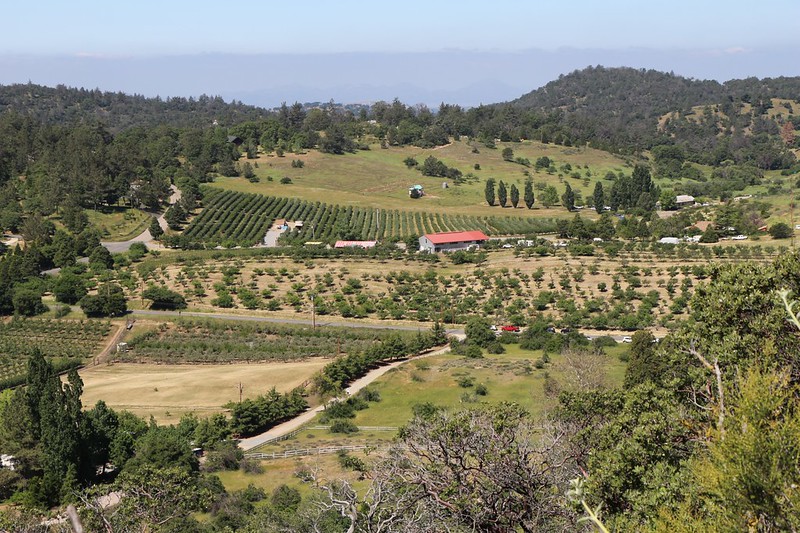 Looking back toward the trailhead on Farmer Road

We had been the first visitors that morning, and we had the entire mountain to ourselves on the way up.  But we knew it couldn’t last.  It was too beautiful a park to remain vacant for long, and we weren’t surprised to meet several groups of hikers on the way back down.  Still, compared to other trails we’d hiked, this one had plenty of solitude.  Recommended!

For more photos and videos see my Flickr Page

For a map showing our GPS Track see my CalTopo Page