Vicki and I spent a beautiful Autumn day climbing Oakzanita Peak in Rancho Cuyamaca State Park, while hiking a nine mile loop to the East Mesa via the Descanso Creek and Harvey Moore Trails.

Here in San Diego, we’re never quite sure what the weather will be like during the Fall.  It could be roasting, or freezing, or raining, or just plain beautiful.  (The one thing that’s certain is that the grass will be brown and the flowers finished blooming after a long dry Summer.)  So when we planned this hike we weren’t sure if it would even happen, and so we waited to check the weather the night before.  When the weatherman predicted unseasonably cool temperatures in the fifties we decided that we could handle it.  We’d simply bring some extra layers with us, including hats and gloves.  Climbing mountains in cool weather sounded perfect to us.

After driving for an hour or so, we reached the parking area on Route 79 near the southern boundary of the park and began hiking uphill on the Lower Descanso Creek Trail.  It seemed that the weather forecast was wrong.  It was nice and warm in the sun.  As we hiked, we continued to remove extra layers until the big daypack was stuffed with clothing. 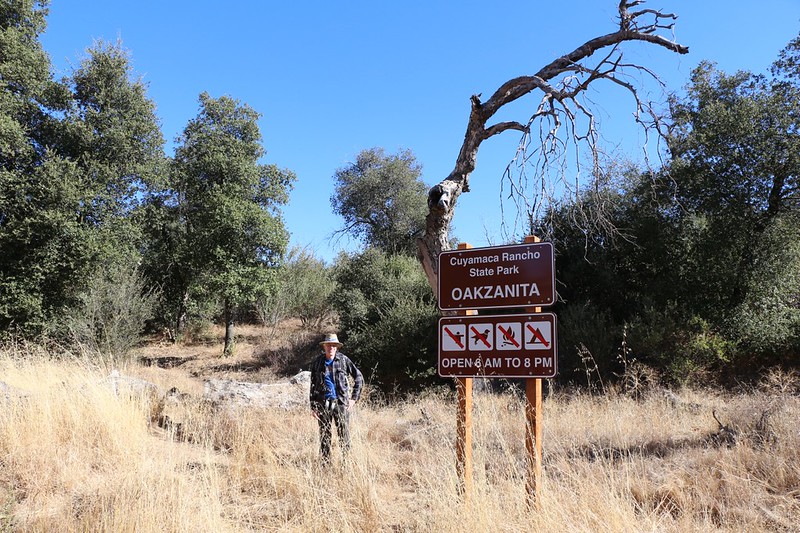 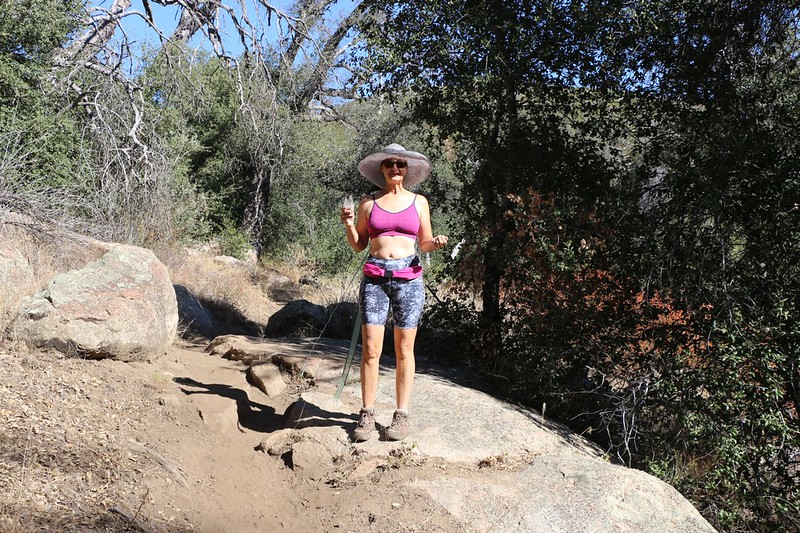 It’s a beautiful fall day on the trail

The lower trail ended at the East Meas Fire Road, and we continued uphill for a very short way on the dirt road until turning right on the Upper Descanso Creek Trail.  We could see Oakzanita Peak on the right.  It looked like we’d get some good views from up there.  We passed some grassy meadows and then the trail switchbacked its way up a side canyon toward the peak.

The views to the north got better as we climbed.  From up here, we could see most of the park, as we were on its southern boundary.  Cuyamaca and Stonewall Peaks dominated the skyline.  They were old friends of ours, but we weren’t visiting them today. 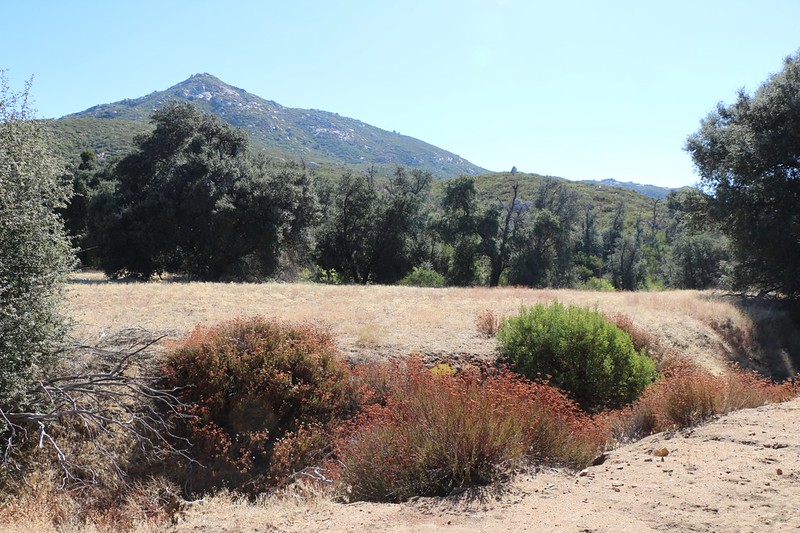 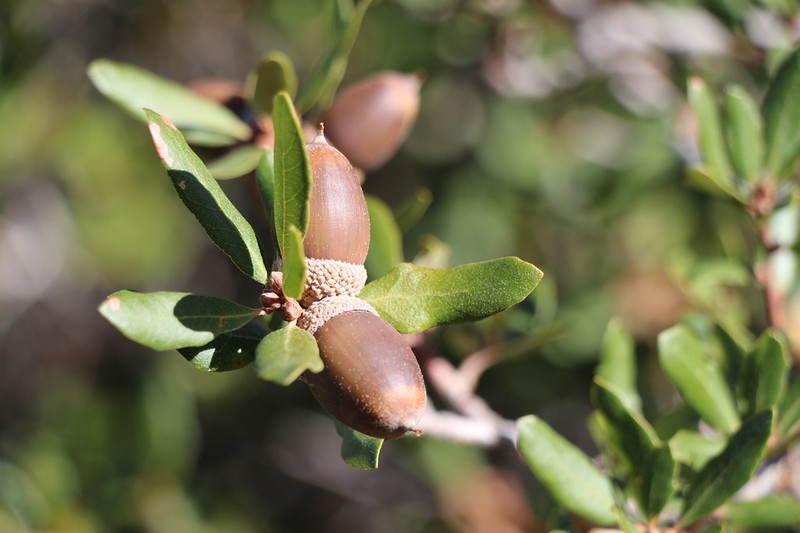 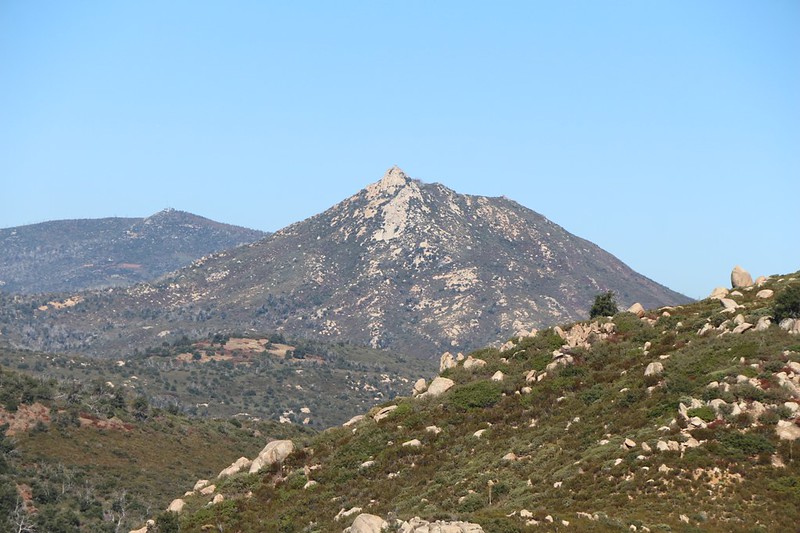 Zoomed-in view of Stonewall Peak to the north

It didn’t take long before we made it to the Oakzanita Peak Trail, which climbed up the southern side of the mountain.  The views continued to open up, and we were able to see Interstate 8 to the southeast where it climbed the grade toward Sunrise highway and the Laguna Mountains.  Some of the hazy peaks in the distance were far beyond the border in Mexico.  To the east we could see more grassy meadows.  These were up on the East Mesa, near the Granite Springs campground.  We’d backpacked up there in past years, and it was a beautiful area. 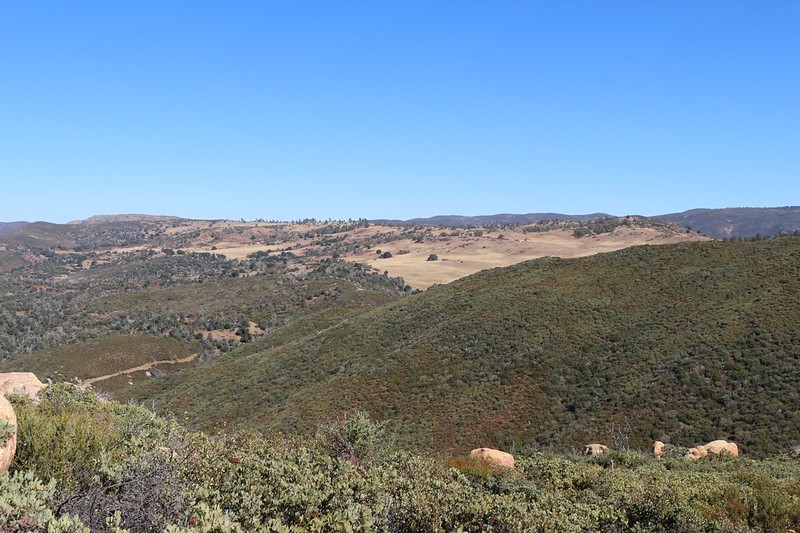 We made it to the peak, which had a fine rocky summit of big granite boulders.  And excellent views.  There was a gentle breeze blowing, and the weather was truly perfect.  We met one other hiker up there and got her to take a shot of the two of us.  We don’t get many of these pictures so we ask for them when we can.  I took a couple for her and she later posted them to instagram.  It’s all good.  Everybody shares their story in their own way.

After that, we settled down with our books and some snack and took a nice long break with our shoes off, cooling those sweaty feet in the breeze.  We had the summit to ourselves for quite some time.  We wondered where all those people went who were parked at the trailhead, but we never found out. 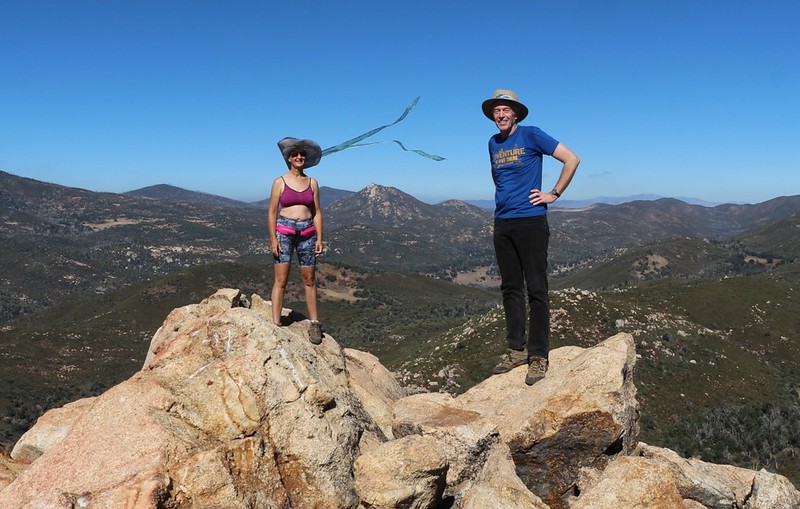 Vicki and I posing on the summit of Oakzanita Peak, elevation 5054 feet

Vicki relaxing in the sun. Behind her are Cuyamaca, Middle, North, and Stonewall Peaks

We got out the map and made some plans.  Originally we were simply going to hike directly back to the car, but looking at that big meadow on the East Mesa had us reminiscing about how pretty it was up there.  The map showed us a way to turn it into a loop hike.  It would mean a few more miles, but not much additional climbing.  We decided to try it, and see how we felt.  The upper end of the meadow would be the point of decision.  Once we started heading downhill across the meadow we sure as heck weren’t going to be climbing back up. 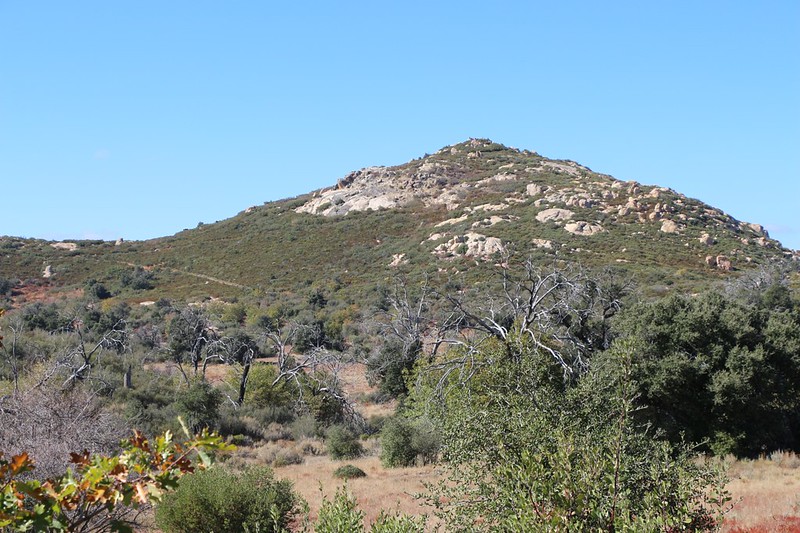 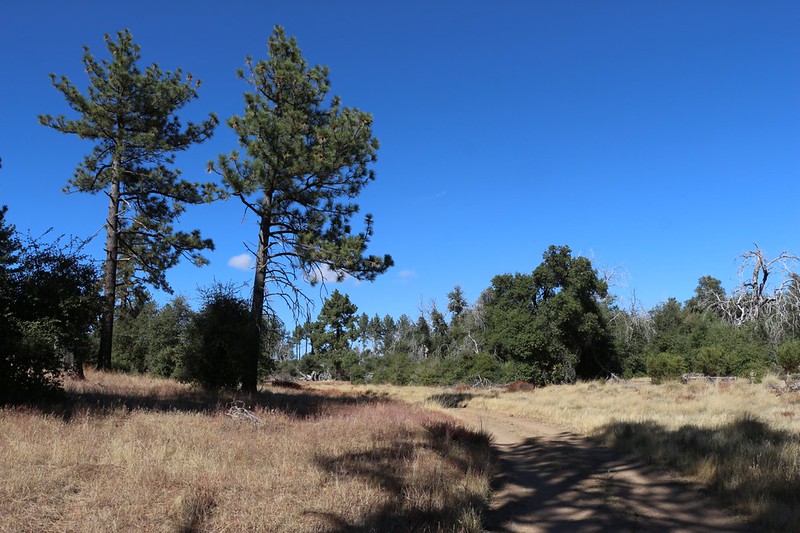 We made it to the Harvey Moore Trail and headed northwest to the Meadow.  It was beautiful, as expected.  And our decision was easy:  Retrace our steps and walk down a dusty dirt road or experience the beauty of nature on an easy, mellow trail?  It was a no-brainer.  So we continued hiking through the meadow.  We spoke about old times with our kids, backpacking with the Boy Scouts.  Good times.

The meadow was brown and dry, with a beautiful golden color.  We like to say that this is the true “California Gold” when the hillsides shine in the sun.  Long ago, before this was a park, it was a ranch, and we knew that many happy cows had munched these grasses.  Now, it’s deer and wild turkeys.  We remembered our sons making crazy “turkey calls” with their hands wiggling rapidly on their throats, and how the Tom turkeys would answer them.  I tried an experimental call myself, but there weren’t any birds nearby.  We only flushed a bevy of quail, and they didn’t respond to turkey lingo.

Down at the bottom of the meadow, where the trail to Dyar Spring turns north, there was a huge oak tree that we always used to stop at on our way uphill.  It was shady and cool under there on hot Summer days.  The wimpy scouts (and adults!) would flop down underneath and rest, while the energetic ones would climb high above them in the branches.  Sadly, this once-magnificent oak had died of sudden-oak disease, and only its bare skeleton now stood amidst the grasses.  It had died a few years ago, but we were pleased to notice that a healthy new oak was growing right next to it!  This greatly cheered us, and we imagined all the future hikers that would rest under its leafy canopy some day, enjoying the shade while listening to insects buzzing by on a lazy Summer’s day. 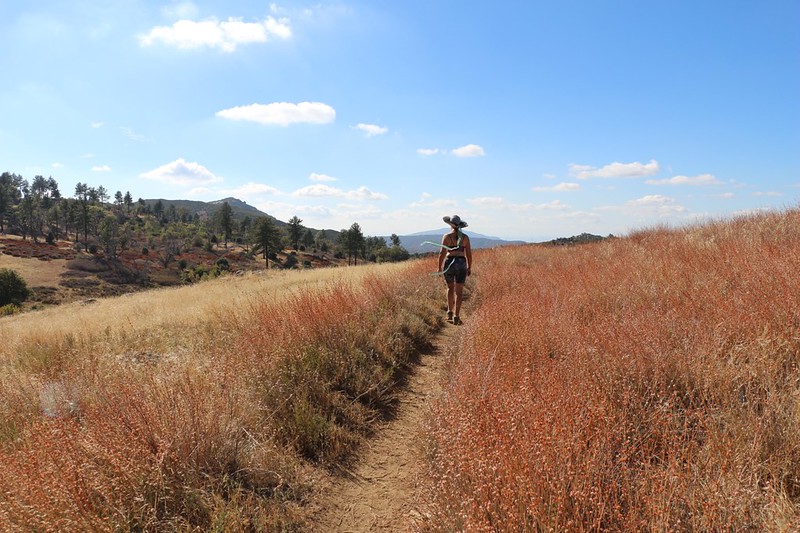 Hiking on the Harvey Moore Trail 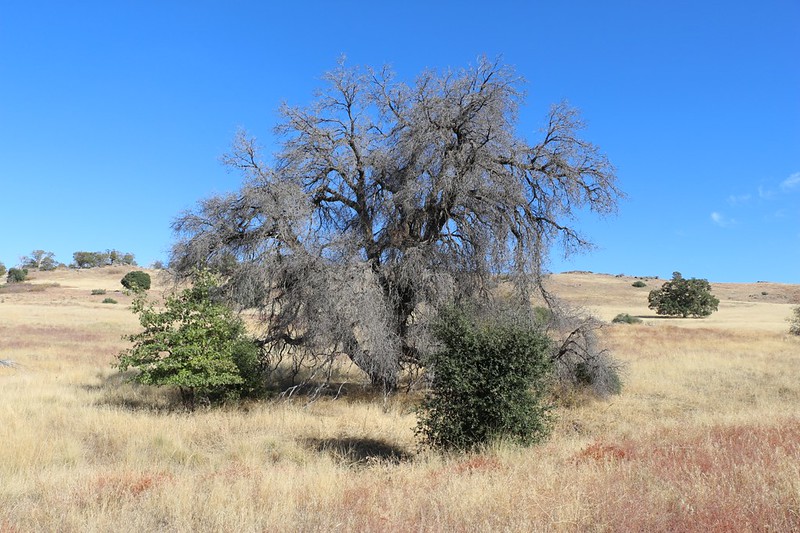 But we didn’t stop this time.  We continued on the trail until we found a spot with a view to the northwest, looking down into Green Valley, where the Sweetwater River flowed.  What a great name for a river.  We stopped for another boot-off break, and finished what was left of our snack.  We hadn’t planned to hike this far when we left home that morning, so our food supply was woefully meager.  But we weren’t worried.  The car was only two miles away, and downhill.  I had also remembered to stash a bag of salty potato chips in the car, which would be our reward.

Eventually, we left the Harvey Moore Trail by turning left onto what the sign said was the “Oak Trail,” which led us down through a pleasant valley to the East Mesa Fire Road.  At that point we had a great view of Oakzanita Peak.  This also “closed” the loop section of the hike, and for the last mile or so we had to retrace our steps on the Lower Descanso Creek Trail to get to the parking area.

Looking down into Green Valley from the Harvey Moore Trail 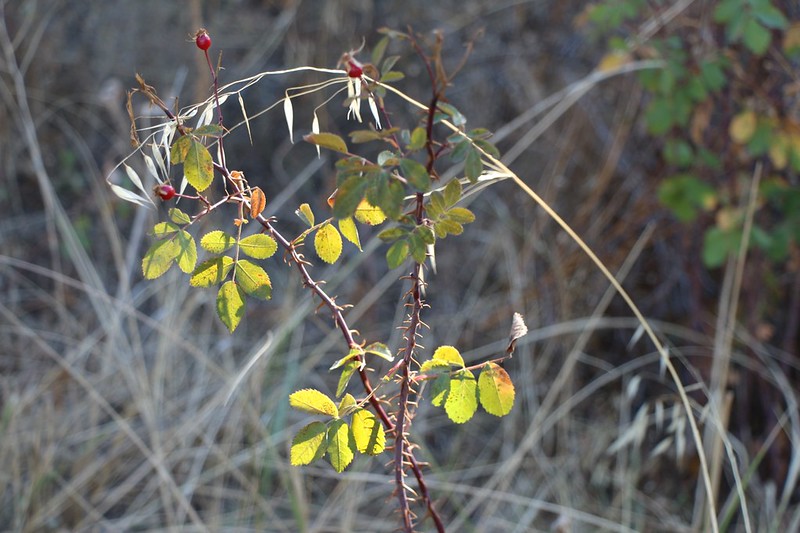 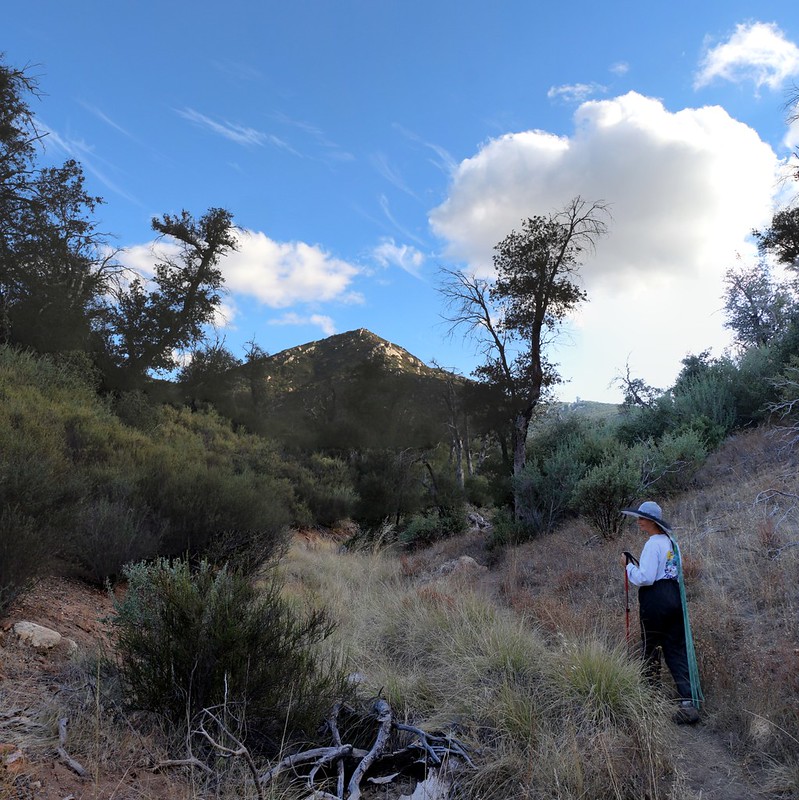 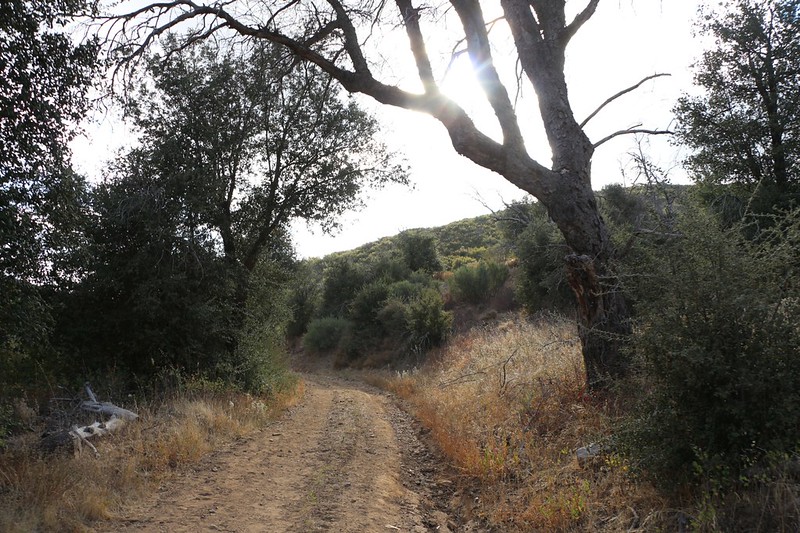 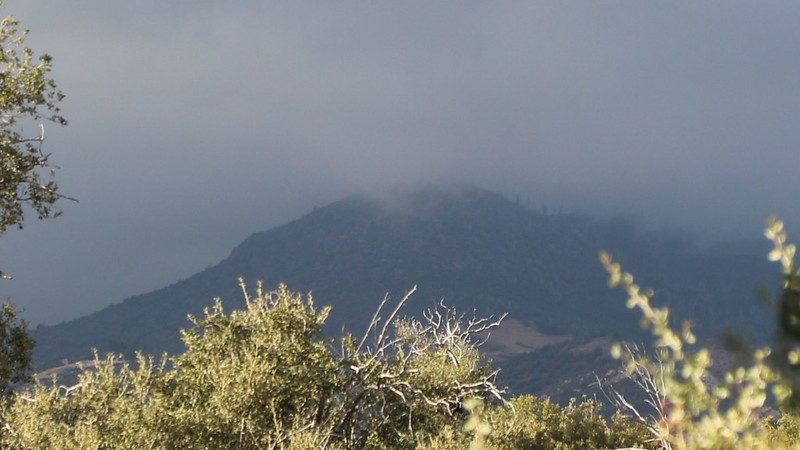 We made it to the car just as the clouds began rolling into the mountains in earnest.  The air grew colder and the breeze picked up.  The unseasonably cool air that they’d predicted had finally shown up.  But that didn’t matter to us.  We jumped in the car and brought out the bag of chips.  Yum!  Another fine day of hiking had been accomplished.  All told, we’d hiked over nine miles and climbed more than a thousand feet, which was definitely a respectable amount.  And we’d had plenty of fun in perfect Autumn hiking weather.  Yes, it’s good to live in San Diego.  At almost any time of the year. 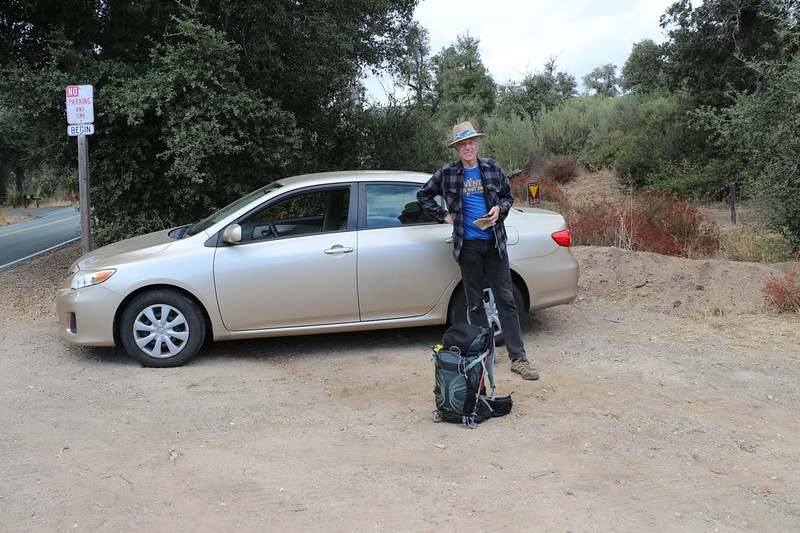 Back at the car after a nine mile loop hike to Oakzanita Peak – another great day in the mountains!