Now that we’re back in shape, and while the weather was still cool, we decided to take a day-hike to the summit of the highest mountain in San Diego County:  Hot Springs Mountain, elevation 6533 feet.  Unlike other summits, this mountain resides within the Los Coyotes Indian Reservation, and so a visit requires permission from the tribe.  Currently this is easy to get:  Just pay ten dollars for a permit at the reservation’s entrance and drive a few miles to the trailhead.

After that, it’s merely a matter of hiking five miles each way and ascending about 2000 feet.  It sounds much easier than it is, however, so don’t fool yourself:  You’ll be in for a solid day of hiking.

We arrived at the entrance to the reservation about 9am as we weren’t sure when they opened.  Our online research didn’t yield any answers, so we came later rather than too early.  It turns out that they open at 8am on Saturdays.  But no harm was done by being late, as it was a cool Spring day with plenty of breeze.  In the Summer you’d be advised to show up early.  We paid for our permit at the booth and received a simple yet useful road map.  We drove to the campground and parked near an old stone water tank.  Then we grabbed our gear and started hiking. 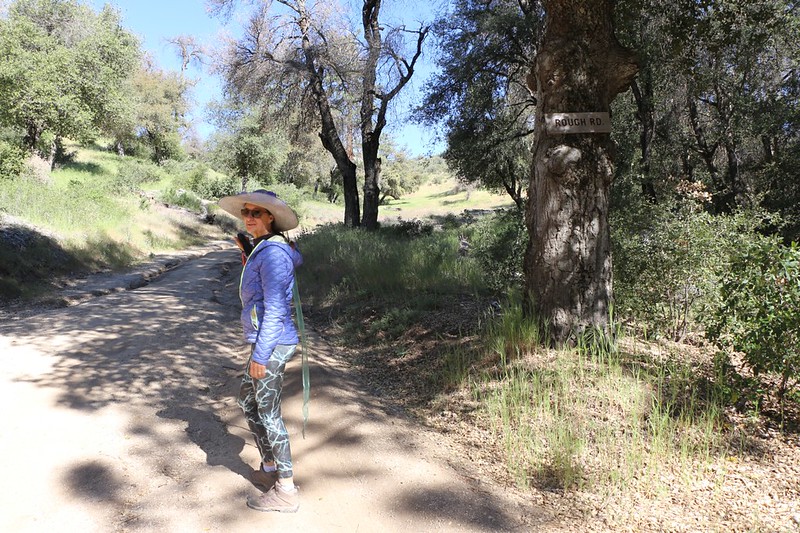 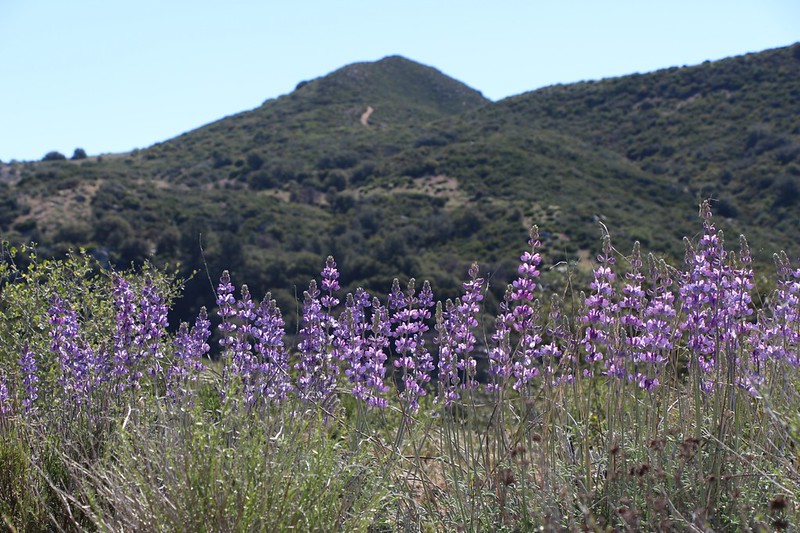 A row of lupines blooming on Rough Road 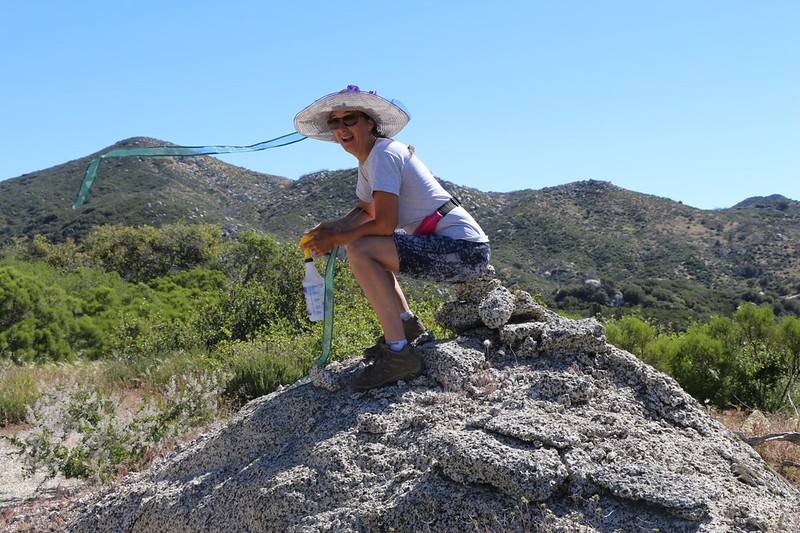 Buns of Steel crumbling granite boulders! Vicki once cracked some granite with her butt and she’s been posing like this ever since 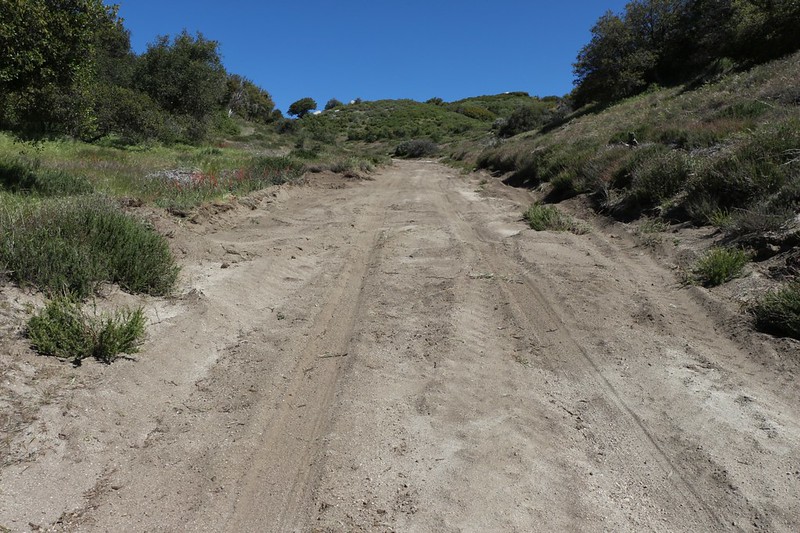 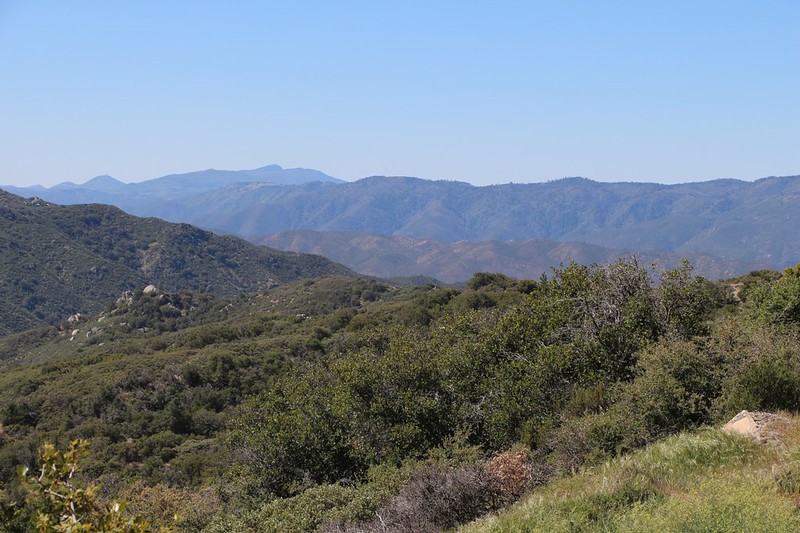 Rough Road was about 2.5 miles long, with about 1500 feet of elevation gain.  It was fairly steep, but not too bad, and the road itself, though made of dirt, had good traction.  There were a few sandy spots, but we rarely felt like we might lose our footing due to loose “ball bearing” gravel.  The beginning section went through chaparral and was south-facing, so it would have been a hot climb if it weren’t for the exceptionally strong southerly breeze that was present that day.  It was so strong that it almost blew us up the mountain!

As we climbed, the views to the south kept getting better.  Spring flowers were blooming everywhere, and the grass was thick and green.  Eventually we gained sufficient elevation to reach a more forested section, where tall oaks dominated.  We had shady patches to pause in, giving us a chance to cool off.

Rough Road ended at the intersection with Hot Springs Mountain Road.  We were about halfway to the peak so we stopped for an extended break.  We ate our snack, drank water, and read our books.  But the most important part was taking off our boots and allowing the breeze to cool and dry our hot, sweaty feet.  We learned this trick (how to keep our feet happy with boot-off breaks) five years before while in the San Gorgonio Wilderness, and we’ve been doing it ever since.  Highly recommended!

Refreshed, we continued onward, the road gaining elevation gradually but also losing it occasionally, as the mountaintop was broad and contained many small peaks, valleys, and plateaus along the way.  The vegetation also changed for the better, with plenty of big pines and cedar trees.  The smell of the forest made us smile as we hiked.  It reminded us of what Cuyamaca Peak used to be like before the Cedar Fire of 2003.  It was shady, yet open and airy, a grassy-floored forest with plenty of space for walking between the huge trees.  Beautiful. 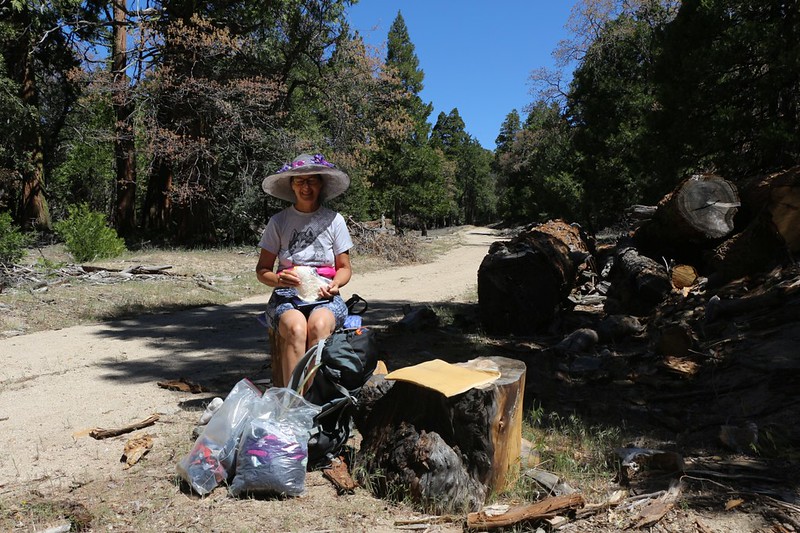 We took a break when we reached Hot Springs Mountain Road 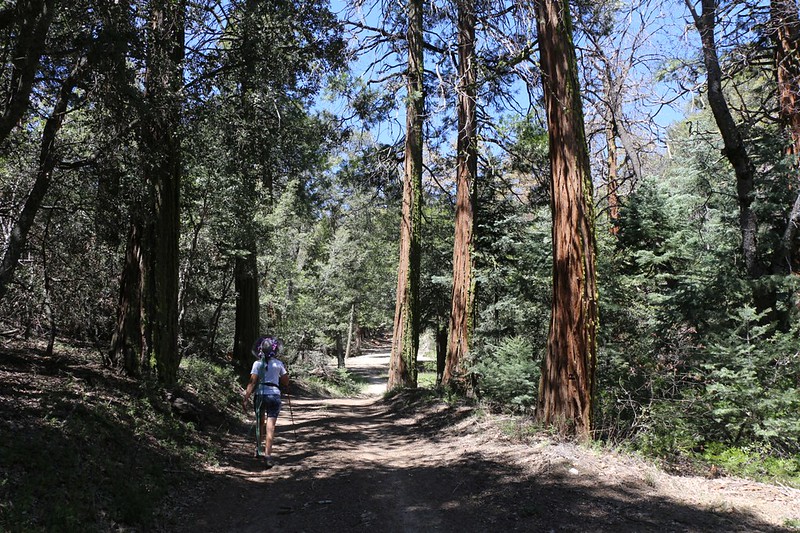 We entered a beautiful forest with pines and cedars and oaks 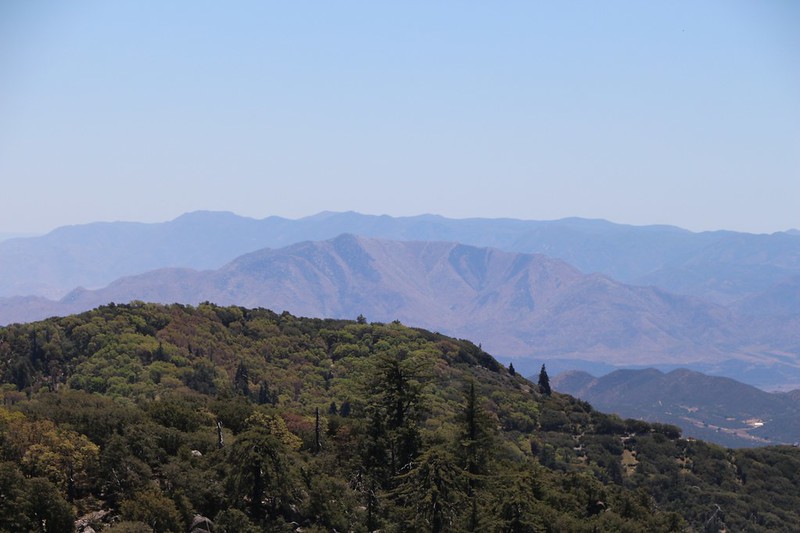 We climbed the road to the end.  Not far away was an old, abandoned Fire Tower.  The room at the top was completely gone and now it was only a wooden platform.  The stairway leading to the platform had so many steps missing that we didn’t dare attempt the climb, but that was OK because the views were just as good from down below.  We were able to see all around us, a truly incredible panoramic view.  Snow-topped San Gorgonio Mountain was 60 miles away and relatively clear, but Mount Baldy at 90 miles was lost in the haze.  San Jacinto Peak at 35 miles was quite distinct.  But the visible peaks were almost too numerous to name, and as we looked around (naming the peaks using the PeakFinder App on my phone) we realized that we were located smack dab in the middle of almost our entire Southern California hiking experience.  San Diego’s peaks were to the south and west, LA’s to the north, and Anza-Borrego’s vast expanse was to the east.  It was a lot of fun thinking about all of the places we’d hiked while being able to see them at the same time.  What a great mountain!  We loved it. 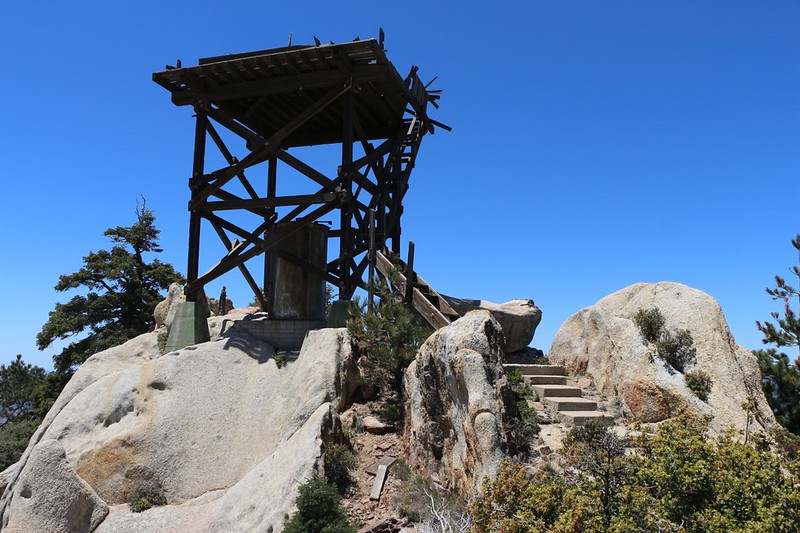 The derelict Fire Tower on the Hot Springs Mountain Summit

Checking the GPS, we realized that the fire tower was NOT the true summit.  The real one was a short distance away on yet another small peak.  So we left this “false summit” and headed off to bag the peak properly.  There was a well-trodden trail that led away from the road’s turnaround parking spot and we followed it upward.  It led to a fun granite summit block that required a bit of Third Class scrambling to gain the top.  And that was where we got the best views of all.  We stayed on the top for another long boot-off break and ate our lunch.  We tried to read our books but didn’t have much success because the views were too awesome. 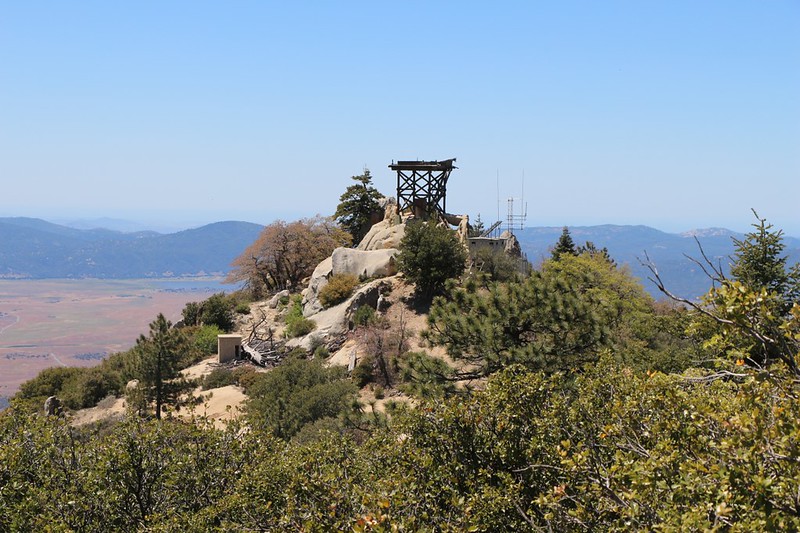 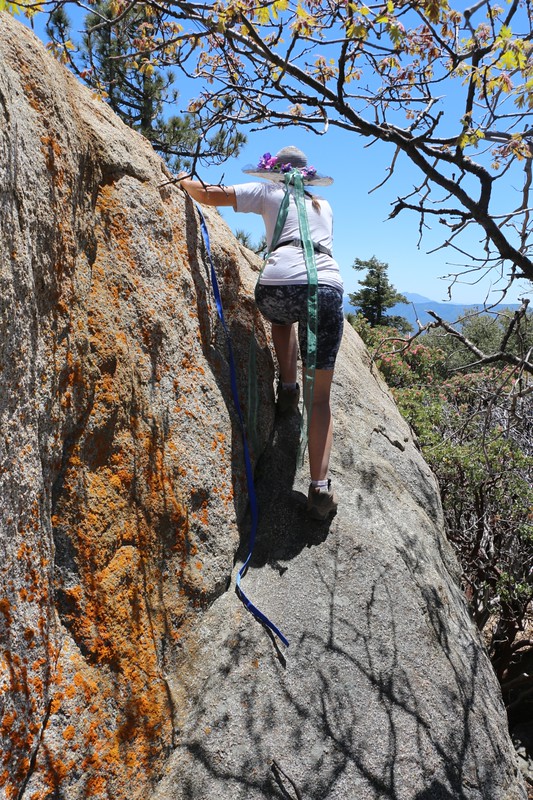 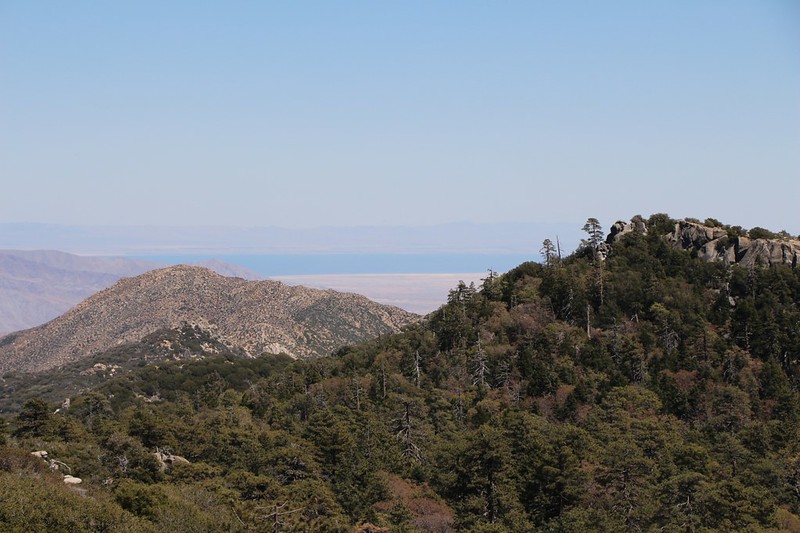 Zoomed-in view southeast to the Salton Sea from the summit

After that, it was time to head back to the car.  On the way, not far from the summit, Vicki turned down a faint side road and beckoned me to follow.  She had seen this majestic-looking granite outcropping from the road on our way up, and now she proposed to take a detour to visit it.  I grumbled a bit but then remembered that Vicki’s side-trips are almost always worthwhile.  Not that she would have listened to me anyway.  She was already a hundred feet ahead!  So I followed.  We climbed and bushwhacked our way up yet another peaklet, and finally reached an impasse.  The boulders were too big and the cliffs too steep!  Then I poked my head down low between two giant rocks.  It looked like we could squirm through the gap, and there was at least a promise of forward progress beyond.  So Vicki, being the leader, squirmed under and took a look.  It was a go!  She waited for me, taking first my camera and then my backpack, and I fit through as well.  After that, it was a fun scramble to the top.  As always, Vicki’s plan was great.  We topped out on a broad granite plateau, completely devoid of trees, with fine views in all directions. We were sorry that we’d just had lunch, because it was a perfect place to take a nice nap with your shoes off. 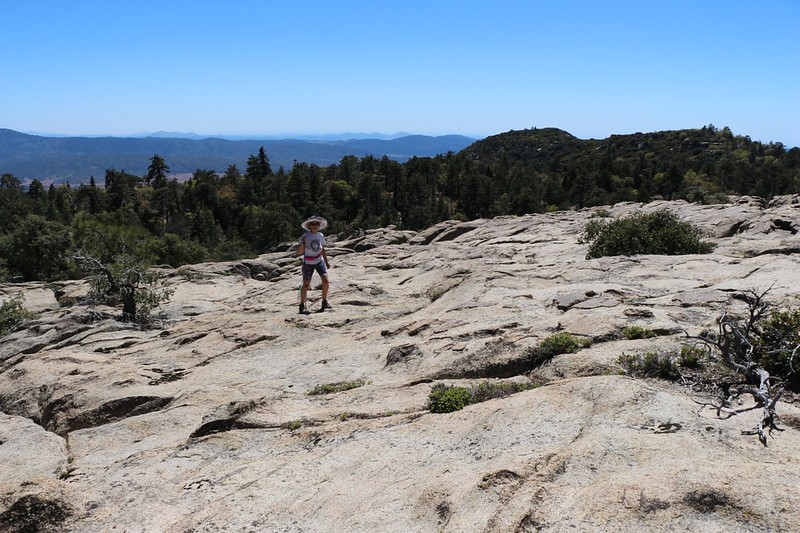 Panorama east from Hot Springs Mountain into the Anza-Borrego Desert 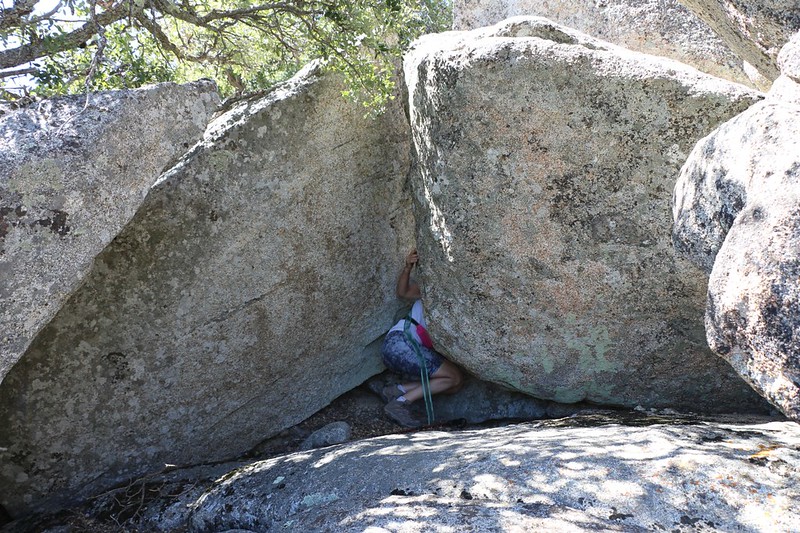 After that it was truly time to head back to the car, and we made good time, first on Hot Springs Mountain Road, then down the long grade on Rough Road.  As the afternoon wore on, the big breeze of the morning subsided, and the temperature started to rise.  It was a hot hike through the chaparral section, so we got out our trusty spray bottle and gave ourselves a few blasts of cooling wetness.  It didn’t take much to get cool, and we were glad to be heading downhill.

We arrived back at the car, which was parked in a convenient patch of shade under a spreading oak tree.  Then it was time to take the long drive home. 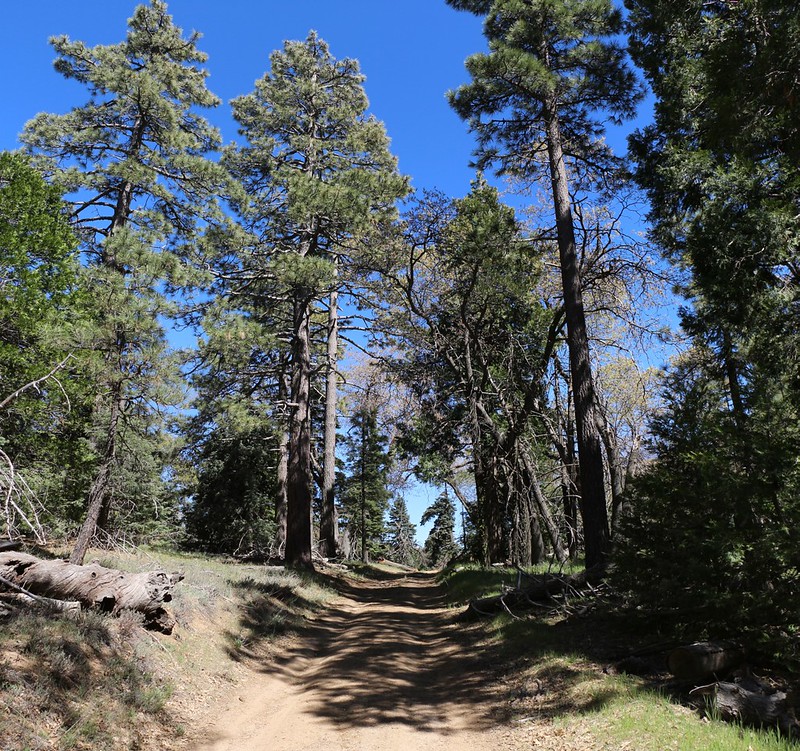 Hiking back through the lovely forest on Hot Springs Mountain Road 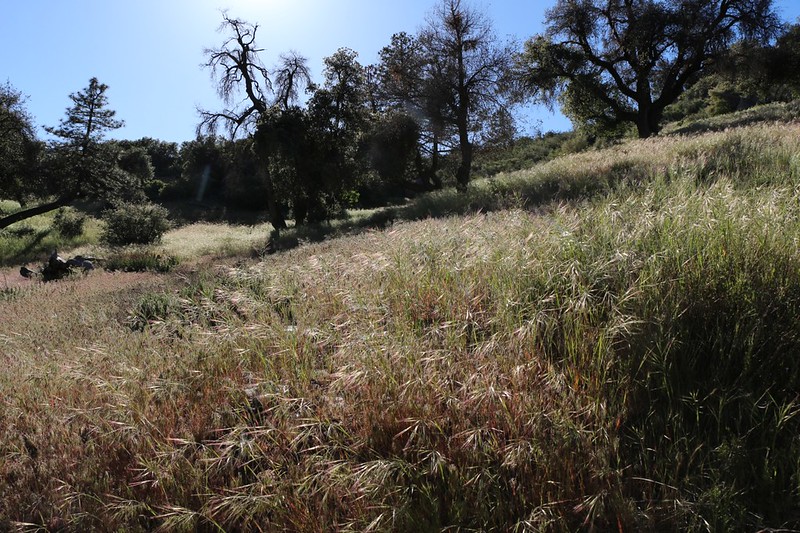 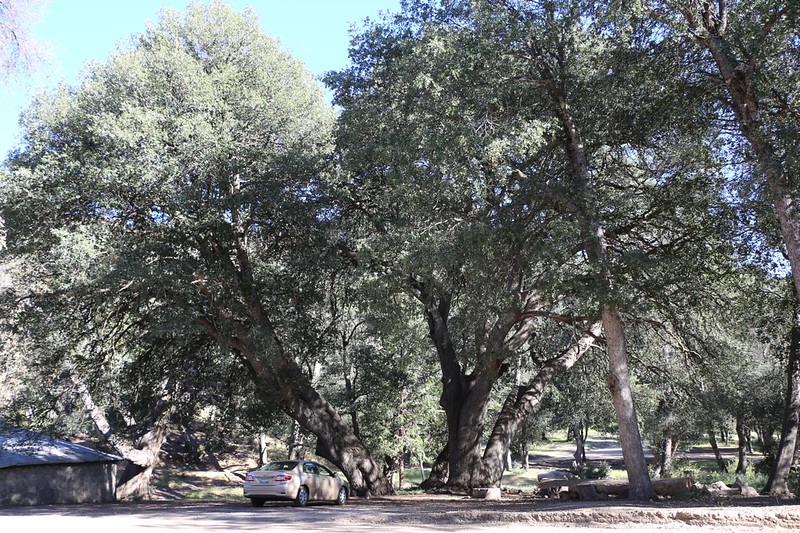 All in all, we both came to the conclusion that we really loved this mountain.  The cedars, pines, and oaks at the higher elevations were absolutely beautiful.  The hike itself was challenging, but fun.  And it was a good place for solitude, as we had only met five people on the trail the entire day.  Truly an unknown gem of a hike.

For more photos and videos see my Flickr Album Page

For a topographic map with GPS Track see my CalTopo Page