It was our final day on the Lost Coast Trail, and it was going to be the easiest day of all.  We only had two miles to hike to the southern trailhead!  So we woke up on the late side (which for us isn’t particularly late) and got dressed.  We went outside to discover a partly cloudy sky, with patches of blue here and there.  As a plus, some lovely low clouds were clinging to the King Range along the coastline.  Very picturesque. 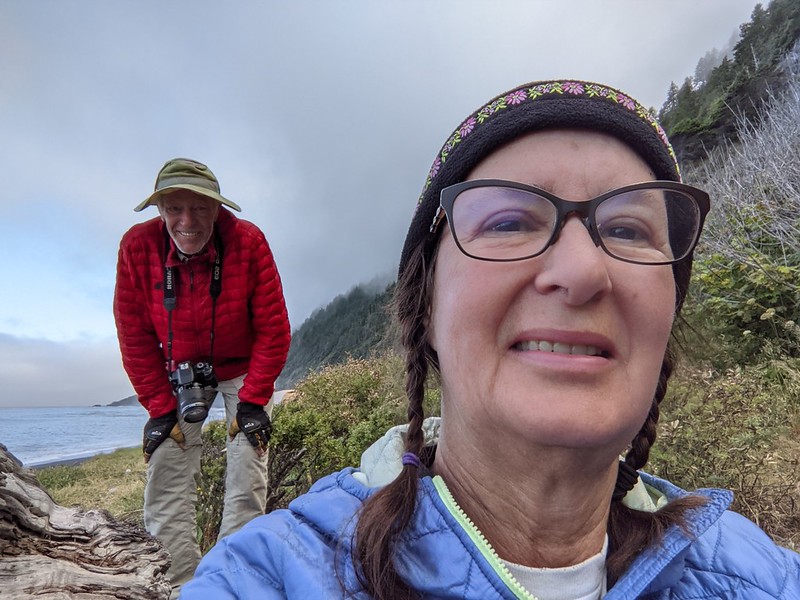 I wandered out to the beach with my camera and took some photos while Vicki boiled some water.  We ate a good breakfast of freeze-dried eggs and hash browns, then hung out on the driftwood log and simply watched the waves breaking on shore for a while.  Very peaceful. 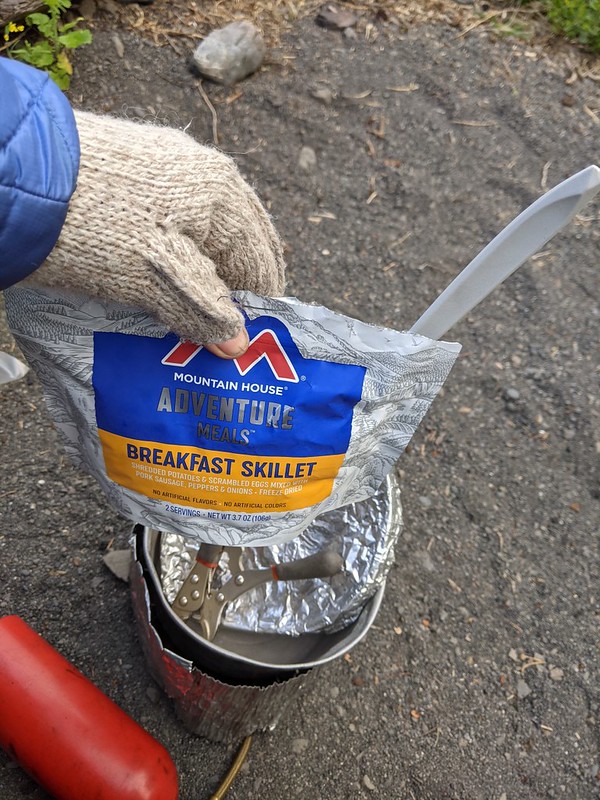 With only two miles to hike, we woke up late and had a tasty breakfast – 7 days on the trail!

Panorama video on a lovely morning, of the beach and our camp at Horse Mountain Creek 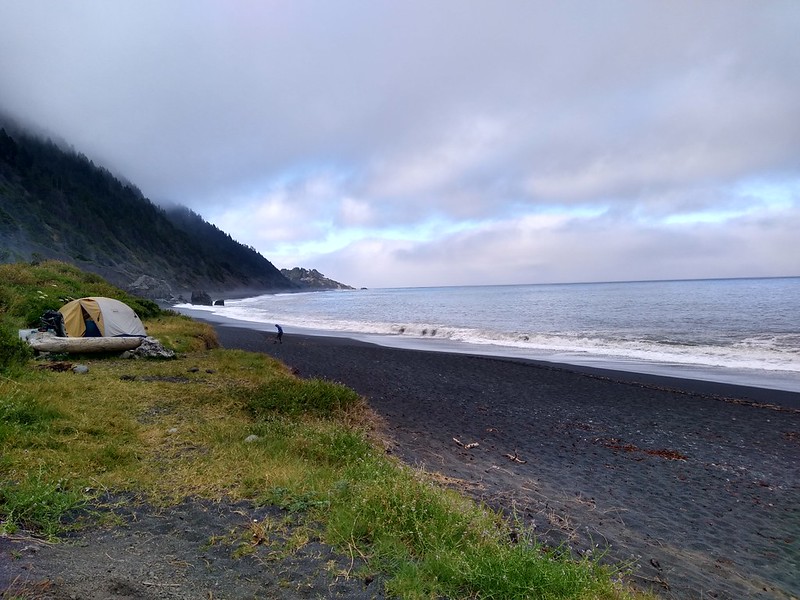 Dawn color was showing in the clouds offshore from our campsite

We spent the next half hour packing up our gear.  Unlike yesterday when we woke to fog, I was happy to discover that the tent was totally dry.  This would save me from having to dry it out later on today at our motel room (to prevent mildew).  We also hung out on the log, just staring at the glorious view.  Such a beautiful rugged coastline.  We waved goodbye to our neighbors as they hiked on out ahead of us, and watched a couple of dayhikers heading north out of Shelter Cove.  It was a great day for a hike on the beach.  And then we headed out.  Only two miles to go! 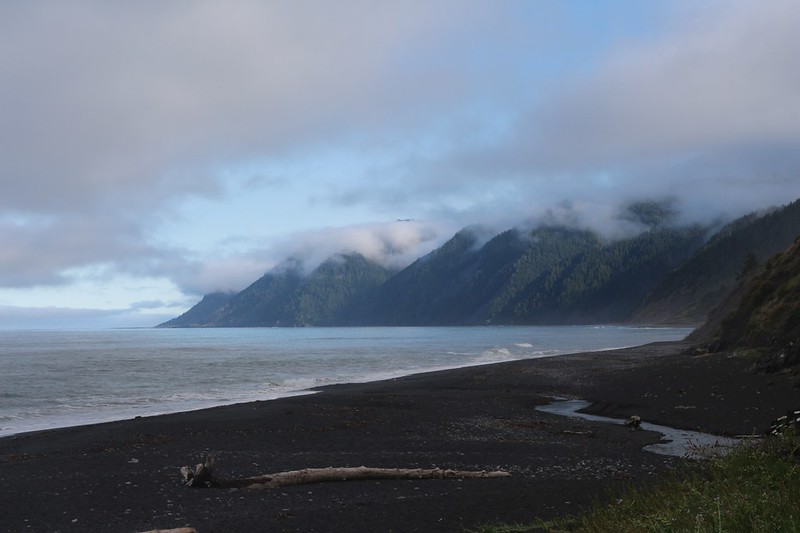 Low clouds lingered on the King Range at dawn, with the creek on the lower right 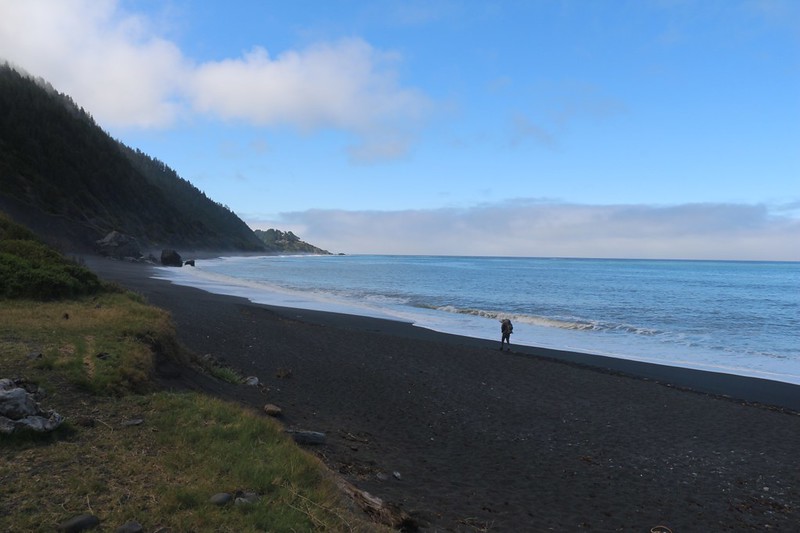 The only significant feature on this section of trail was the Kaluna Rocks.  We were both glad that we weren’t there when they landed on the beach after falling down the hillside!  Since then, the ocean had been having its way with them, slowly and neverendingly grinding them down into more of that course black sand.  The tide was out far enough that we could walk in between them, which was nice, but not high enough to make any dramatic splashes like yesterday, which was disappointing.  Oh well; you can’t have everything. 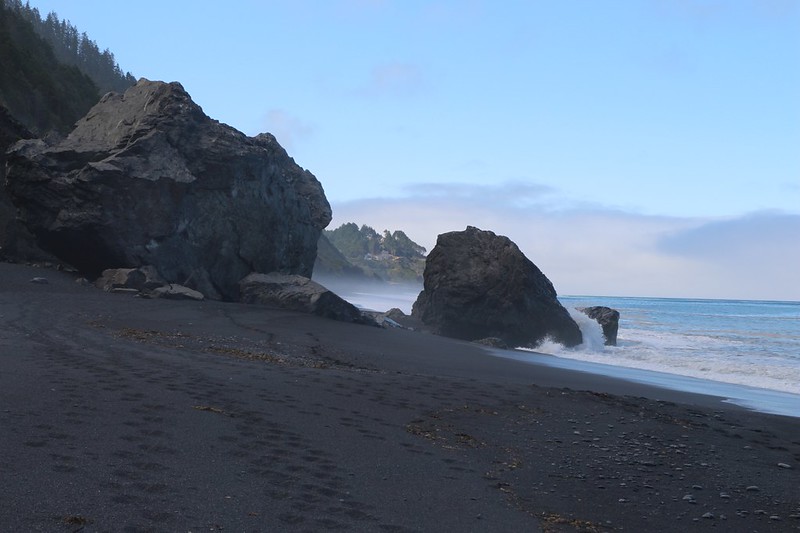 We arrived at the Kaluna Rocks at a low enough tide that we could sneak between them, between sets of waves 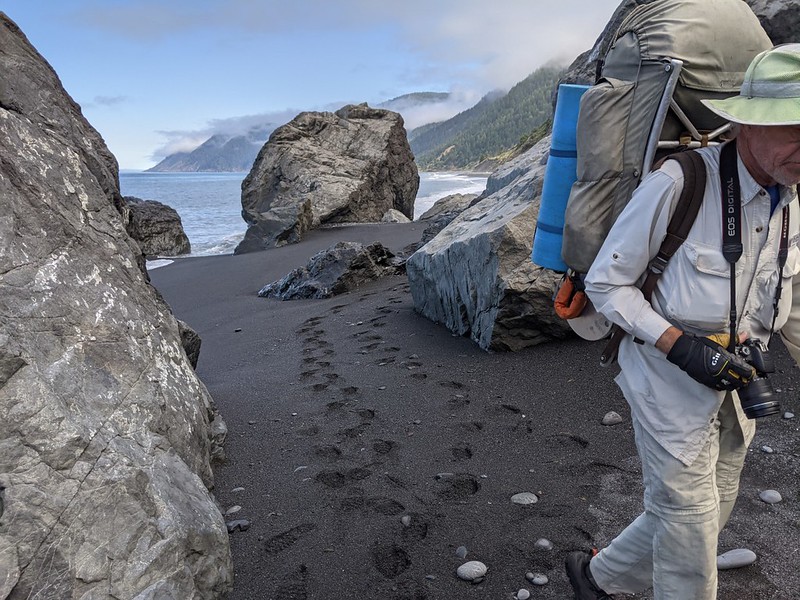 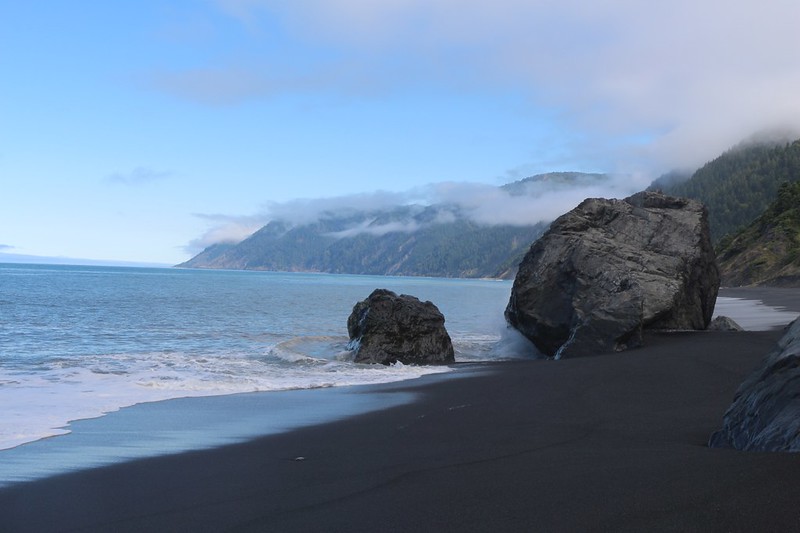 Looking back north at the Kaluna Rocks and the Lost Coast, with clouds still shrouding the King Range

It helped that the tide was lower, but the beach was still quite a chore to hike.  The sand wasn’t fine enough to pack solidly, even down near the surf line, so our boots sank in as we walked.  I could see why the three-day-LCT hikers hated this stretch, as they often had to hike the full nine miles of soft sand in one continuous shot, all the way from Big Flat.  Vicki and I hiked it in three days!  This last two miles of slogging must seem to take forever for those other folks, but we were enjoying it immensely. 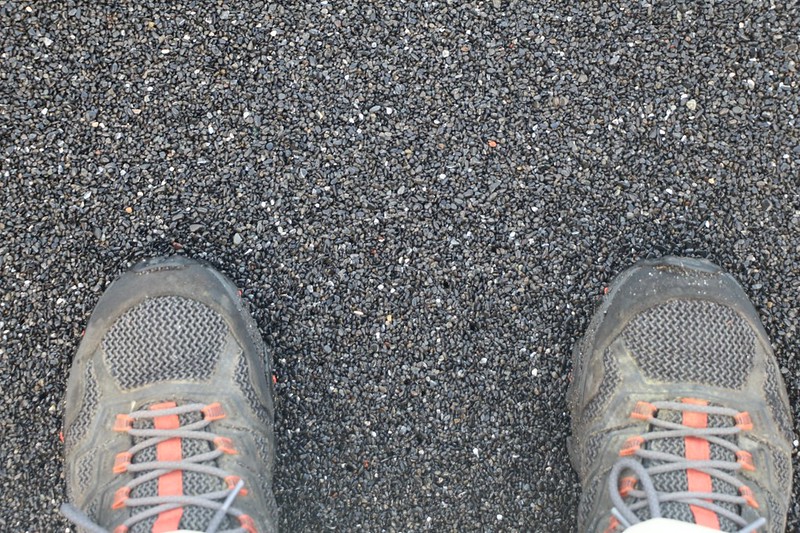 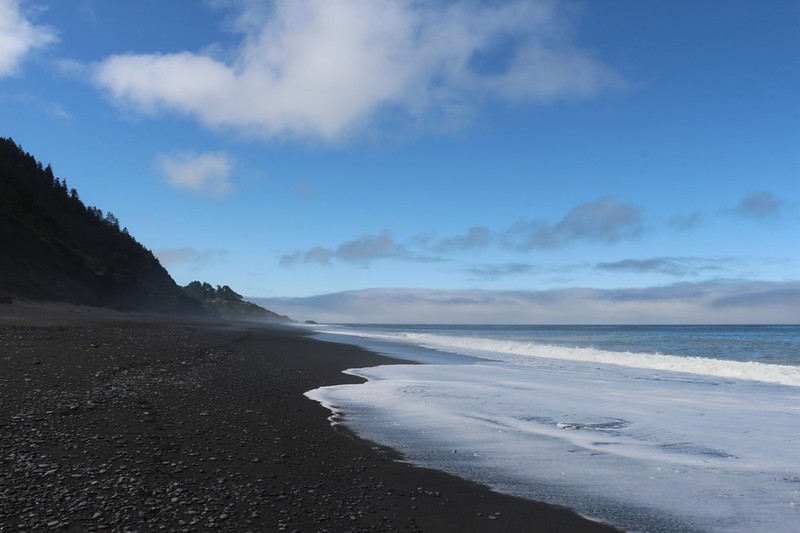 Hiking south on the final mile of the trail, with the town of Shelter Cove just ahead of us

As we hiked, the marine layer clouds melted away in the sun, and soon it began to get a bit warm, although nowhere near as warm as it was during the heat wave of the previous week.  We got some clear views along the coast, and we were able to discern Punta Gorda far to the north, which we had rounded on our very first day.  We also spied many other landmarks that we knew quite well.  It was fun to stop and be able to point out all the places we camped along the way. 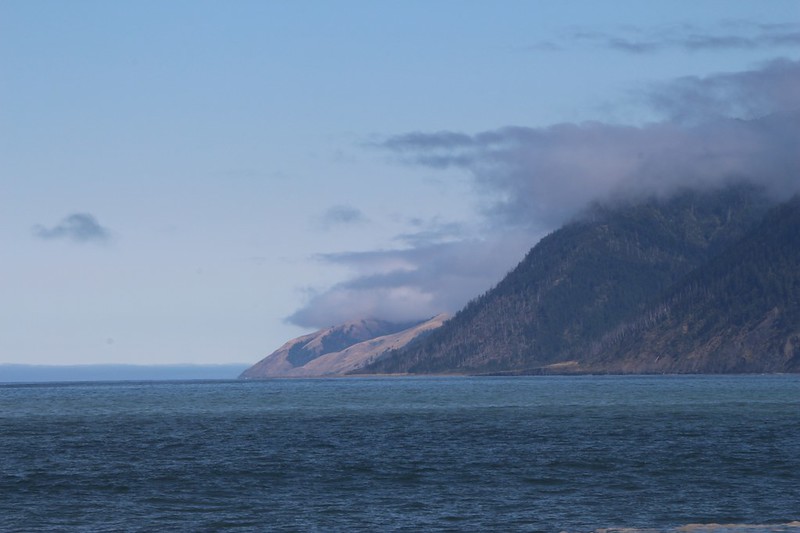 Zoomed-in view north all the way to Punta Gorda, Spanish Ridge, and Big Flat – most of the Lost Coast Trail

After that, we turned our attention south.  The trailhead was just in front of us.  It’s only a few more steps, I told myself, as my boots sank into the soft sand and the sweat trickled down my forehead from under my hat.  I looked at the trailhead area, and remembered that the car was parked way up high on an overlook above the beach.  When I mentioned it to Vicki she groaned.  Uphill at the end of a hike?  This was most unusual, and totally unfair.  We’re used to the mountains, where the car is always at the bottom of the trail.  I told her not to worry, that she could wait for me down low with the packs while I hiked up the road to get the car.  She was much happier after that. 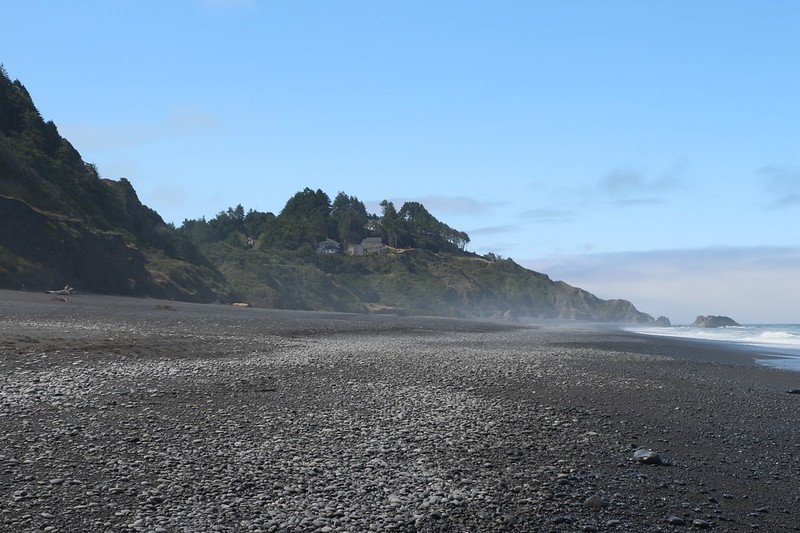 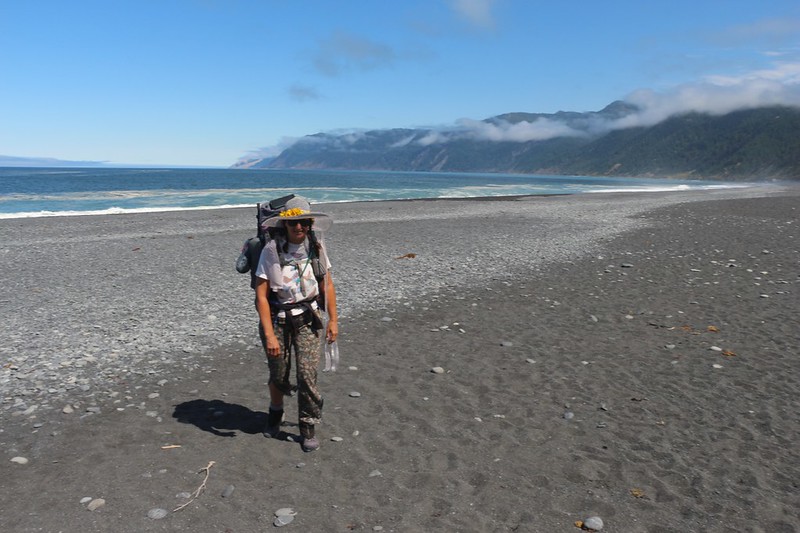 Happy Vicki arriving at the southern terminus of the trail 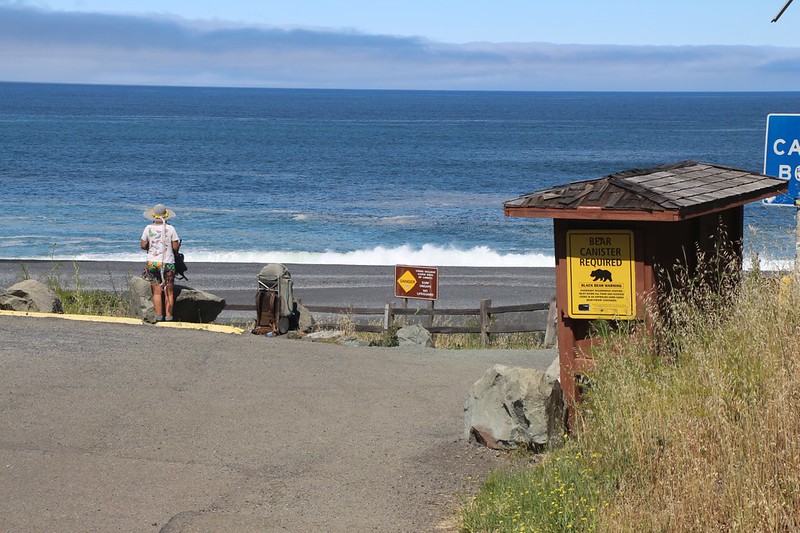 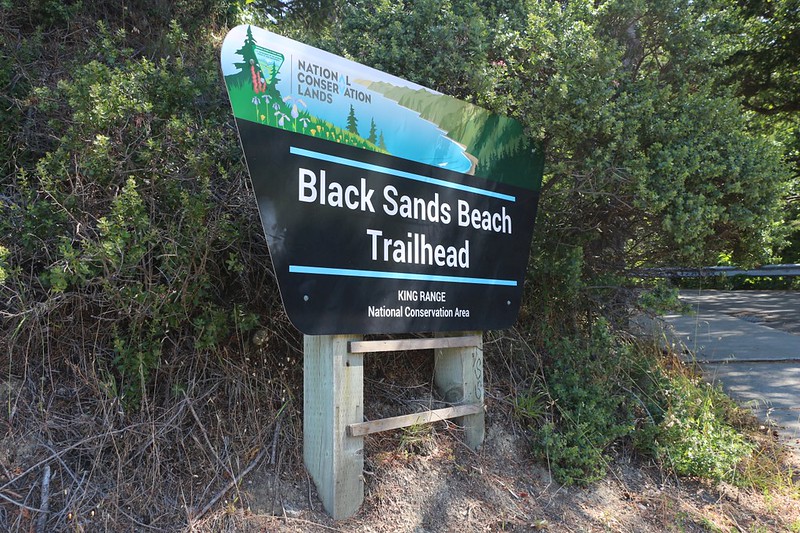 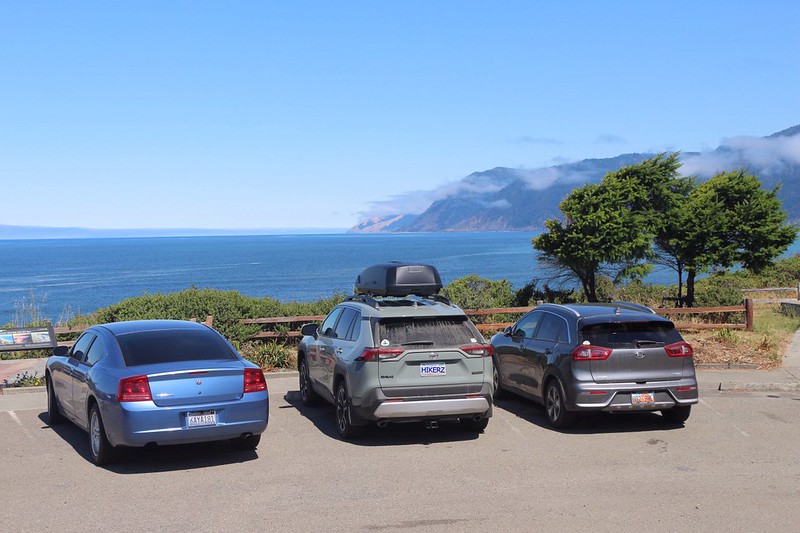 And that’s what we did.  I started the car and drove back down to the trailhead.  We loaded the pack inside, then headed back up the hill to the parking lot and parked in the shade.  There were bathrooms with running water!  Luxury of luxuries!  We hung out in the lot for a while, getting dressed in clean clothes.  I even shaved!  We were truly civilized.  Then we got our gear ready for driving, and headed up the hill, looking for a store.  I needed a Lost Coast T-Shirt and Vicki bought some items for the family.  Plus a bit of real food, of course.

Then it was off and away, on the road north to visit Humboldt Redwoods State Park.  Goodbye Shelter Cove!  Goodbye Lost Coast Trail!  We were done with the beach.  Now it was time for some forest. 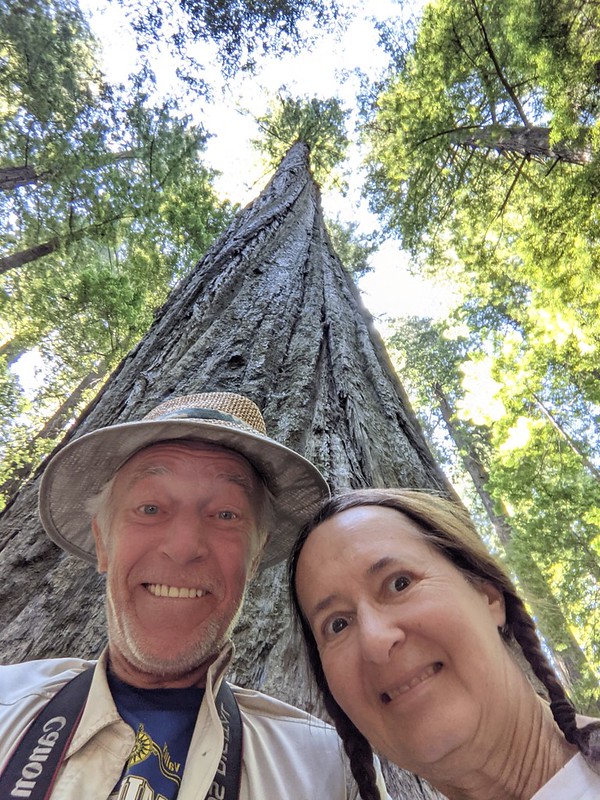 It was still early, so we visited the Founders Tree in Humboldt Redwoods State Park

We had fun in the park and took lots of photos of the trees, but that adventure isn’t really part of the Lost Coast Trail, so I won’t elaborate on it here.  We drove south to the town of Garberville, where we already had a motel reservation, and spent a long time in the shower, scrubbing away all the dirt and stink of the trail.  It felt great to be clean and dry.  Then we went out to eat at a restaurant for dinner.  I was happy to have a juicy hamburger with salty fries, while Vicki was ravenous for some salad.  And it sure was heavenly to sleep on a proper mattress again. 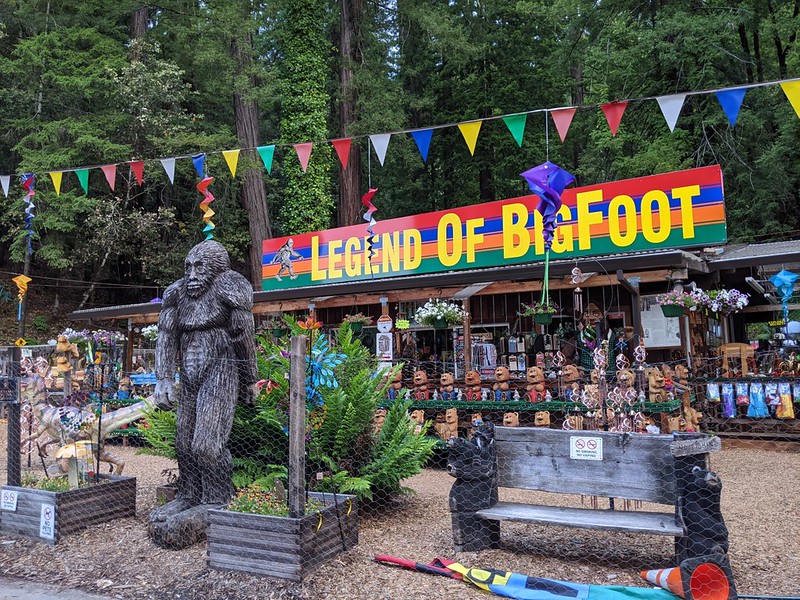 On our way back to San Diego, we just had to take the time to Search for Bigfoot!

We woke up early, dropped the room keys off in the office, and headed south on Highway 101.  It was a 12 hour drive to San Diego, so our plan was to break it up by stopping off at a friend’s house in the Bay Area.  On the way home, we analyzed the trek.  Our gear did well, nothing failed and we brought the right amount of it.  After ten-plus years of long distance backpacking, maybe we’d finally figured out what the heck we were doing!  LCT-wise, We both agreed that seven days wasn’t too long to spend hiking on this marvelous trail.  There’s nothing else like it in the USA.  It was much different than Canada’s West Coast Trail, that we’d hiked back in 2019, but it still had that wild, coastal feel, complete with camping directly on the sandy beach.  Highly recommended!