The highlight of our fourth and final day in Death Valley was hiking with our headlamps, at high noon, into the near-darkness of a deep slot canyon within Sidewinder Canyon.

We woke up on Hanaupah Canyon Road at first light and watched the sunrise for awhile from inside the car.  There was a steady breeze blowing down the big valley and it was a bit cold.  We decided to find sheltered spot to fire up the stove for breakfast, and drove down to Shorty’s Well, but there weren’t any good spots.  And no well, either.  So we got back in the car and kept driving.

Colorful Sunrise Clouds from our camp on Hanaupah Canyon Road

We blasted north on the West Side Road and had fun creating huge clouds of dust along the way.  It was a great road to drive on.  There were lots of high clouds forming in the sky, and the photography became better. 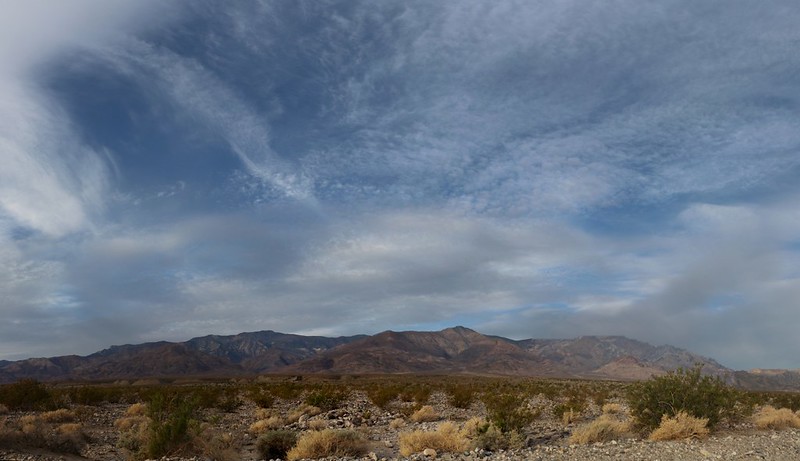 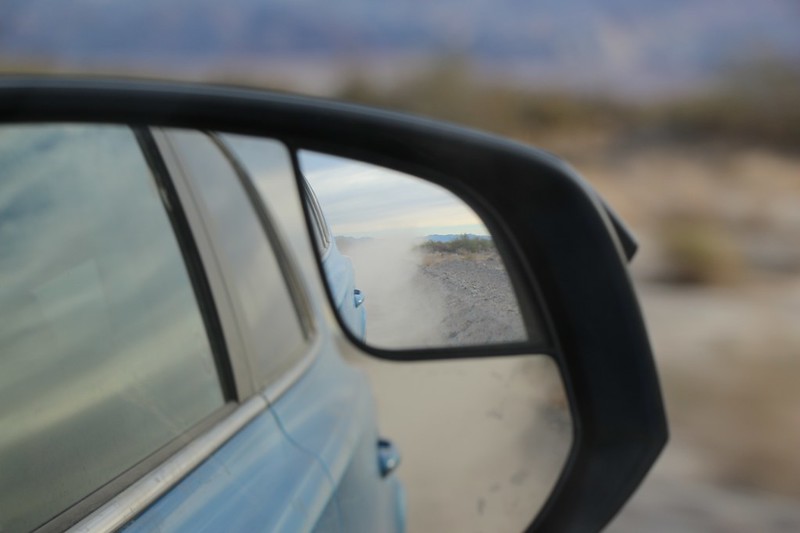 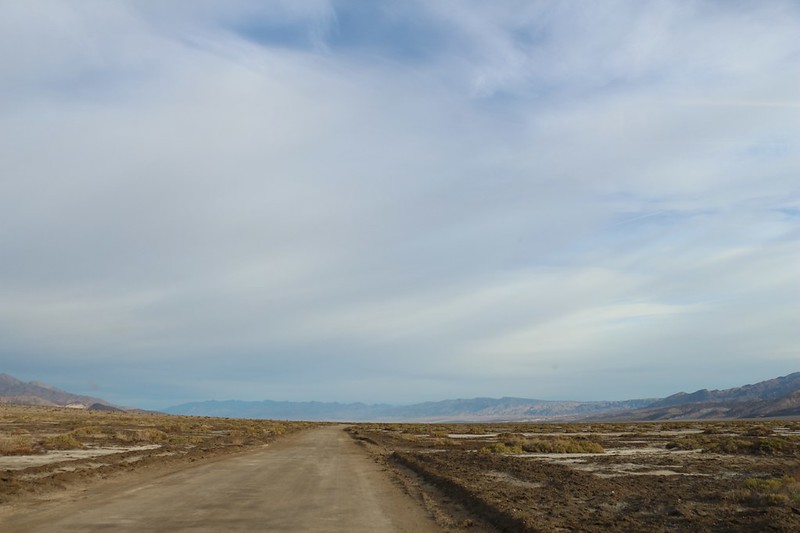 Driving north – you can go 30 mph easily in any car

The road turned northeast and crossed the salt flats of Death Valley.  The only plant that can grow down there is the aptly named Pickleweed, which can tolerate the exceptionally briny conditions.  Life always finds a way to adapt.  We parked at a turnout near the low point of the valley and checked out what looked to be a river of solid salt.  I have a feeling that this was why they called it Death Valley.  Even the pickleweed wouldn’t grow down there. 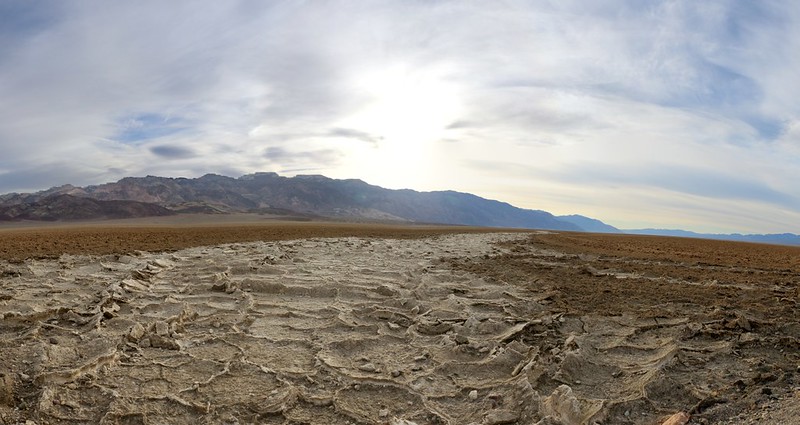 We hung a left and headed to Furnace Creek to top up our gas.  We almost drove away hungry, but luckily remembered about the meal we put off due to wind.  So we found a nearby parking spot that was sheltered by some large bushes and sat down at a picnic table.  Civilized dining.  We got out the stove and cooked some breakfast.  Our stomachs really appreciated it.  We were in much better moods after that.  Cars and people both need fuel.

Then it was time to head south on Highway 178 for about 40 miles or so.  We passed the sites we’d explored on our first day in the park:  Artist’s Drive, Natural Bridge, and Badwater.  Then I got out the GPS and navigated so we wouldn’t drive past the canyon like we did that first day.

In typical Death Valley style, a truly great spot was announced with a tiny sign and little fanfare.  But the road was properly plowed, at least, and that’s also part of their style.  We drove up the sandy road and parked in the relatively large dirt lot.  At this point there were no signs whatsoever stating which of the canyons in front of us was Sidewinder Canyon.  I hate to say it, but this was also their style.  Luckily, we had gotten good directions from the interpretive ranger at the Furnace Creek Visitors Center.  She knew what we wanted to see, and warned us not to take the obvious canyon directly in front of us.  The one we wanted was over on the right side. 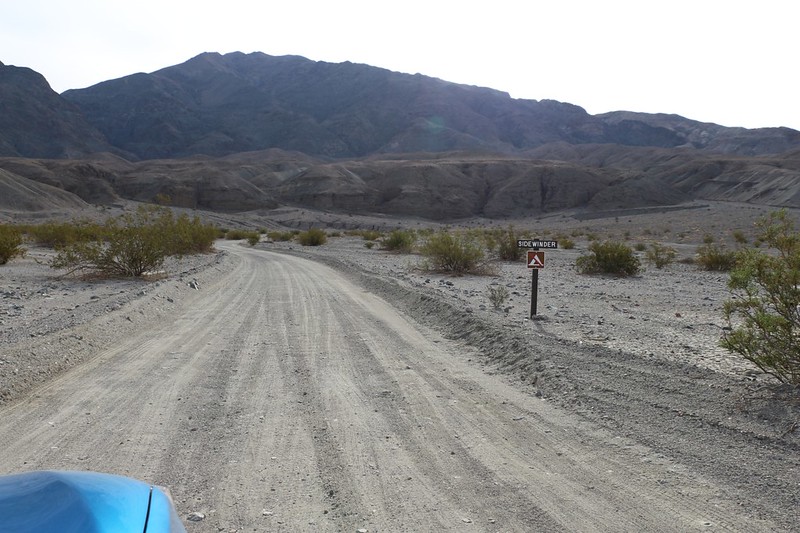 We parked the car and prepared our daypack with snacks, lunch, and plenty of water.  It was looking to be a hot day, so we made sure to dress for the heat.  There was only one other car in the parking lot, and it appeared that they had headed up the leftmost canyon.  It looked like we would have Sidewinder Canyon all to ourselves!  For a short time, anyway.  Maybe keeping this area low-profile and poorly signed is a wise move on the park’s part, after all.

The trail up the sloping alluvial fan was fairly obvious and easy to follow.  It went uphill, of course, and soon we were sweating.  But that’s OK, as they say, because “it’s a dry heat.”  We’re not sure if we agree entirely, although a muggy heat would undoubtedly be worse.  Just the same, it was warm in the sun, and we were thankful for the breeze at our backs as we entered the canyon itself. 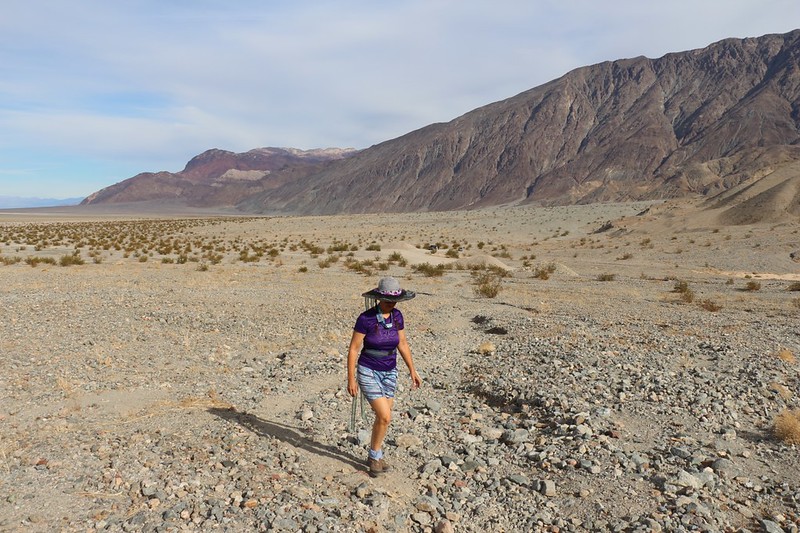 Vicki hiking up the long sloping wash into Sidewinder Canyon 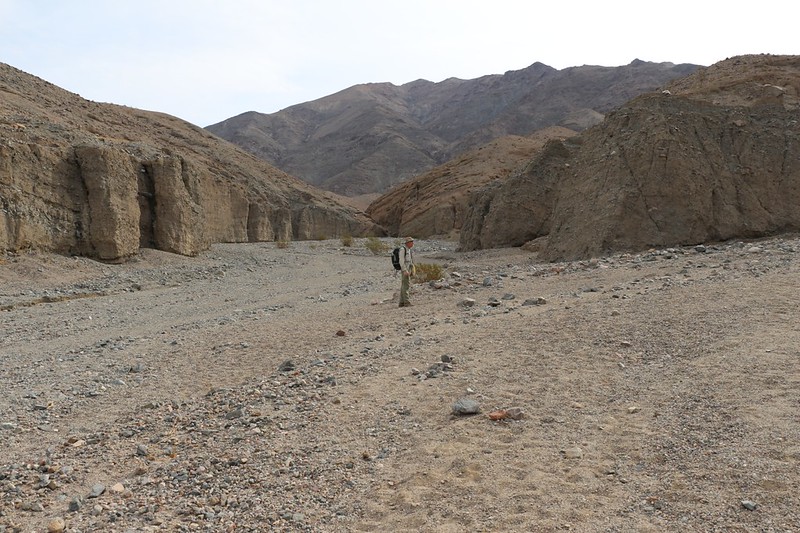 We decided to go directly to the second side canyon, because that was supposed to be the one with the headlamps and darkness.  Of course, the canyons weren’t marked with signs of any kind.  Luckily, I had my smartphone with the Gaia GPS app running, and I had pre-downloaded the Open Cycle Map layer.  The three side trails were shown on that map.  So we hoped the map was correct and headed for slot canyon number two.

And it was correct!  But deceptively so.  When we followed the canyon off to the right, it didn’t go very deep, and it never got dark.  In fact, it was barely worthy of the name “slot.”  So we came back out and checked the GPS.  The trail on the GPS led to the left, not the right.  But when we looked, there was only a pile of giant stone blocks on the left.  It was a dead end.  Or so we thought.  Luckily, Vicki doesn’t give up easily, and she wormed her way under those chockstones and discovered that the canyon became more normal after that initial section.  She had me pass her my backpack, and I crawled in, as well.  NOTE:  If you are obese, don’t bother trying to get through.  But for everyone else, believe me, you really want to get in there.  The slot canyon turned out to be excellent! 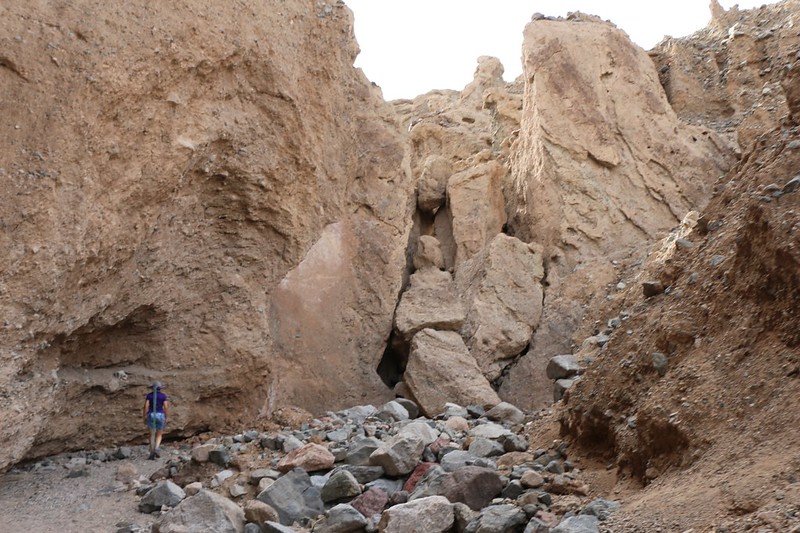 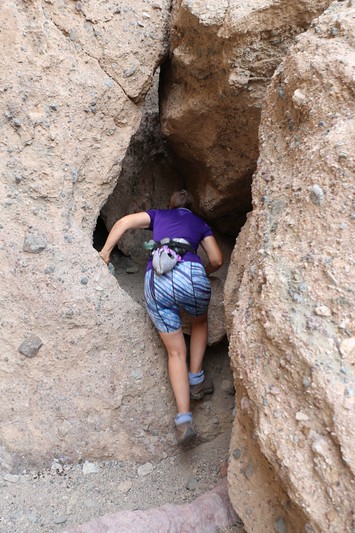 GoPro video of me scrambling through the narrow passage 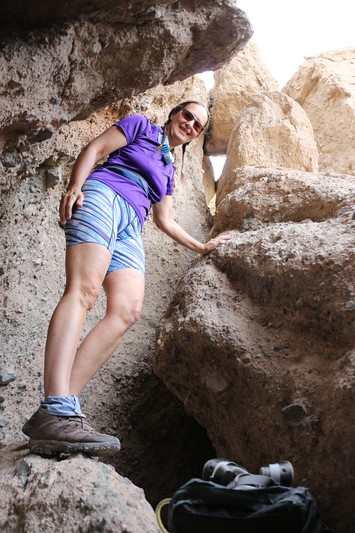 After getting through, we readied our headlamps and proceeded up the canyon.  Initially, it was a typical slot canyon experience, with tall, high walls and a narrow, sinuous passage.  That alone was worth the scramble under the chockstones.  But soon enough, the passage got deeper and darker.  Apparently, sometime in the distant past, a significant section of earth up above us had slumped down and completely blocked the sunlight from entering, so that the canyon was quite dark.  Headlamps were truly needed, and it was high noon!  We were laughing and giggling as we hiked down what had now become a winding cave.  It broke out into even more slot canyon fun, and we explored onwards until we reached a point where there was a steep headwall, or dryfall.  At that point, we decided not to risk an injury by going any further.  And then we got to hike back out through the darkness once more.  It was great, and if we visit Death Valley in the future we will certainly make sure that we visit this canyon again. 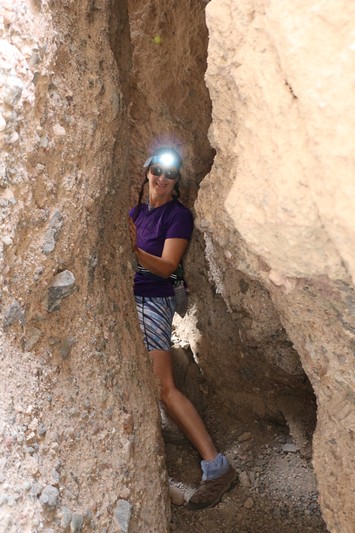 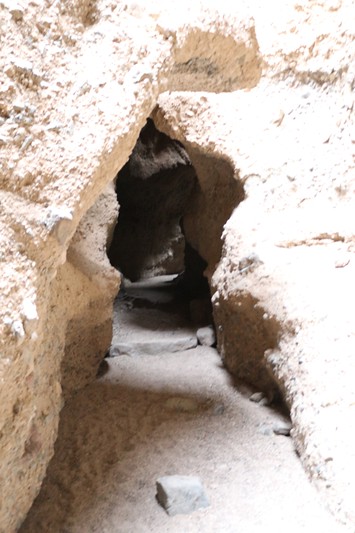 We head into the first of the darker sections

Video as I hike into Slot Canyon Two in Sidewinder Canyon 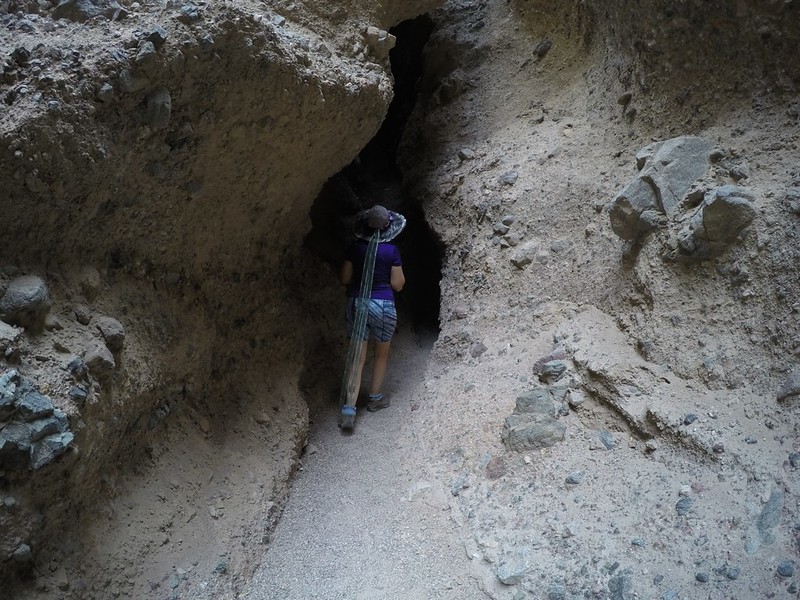 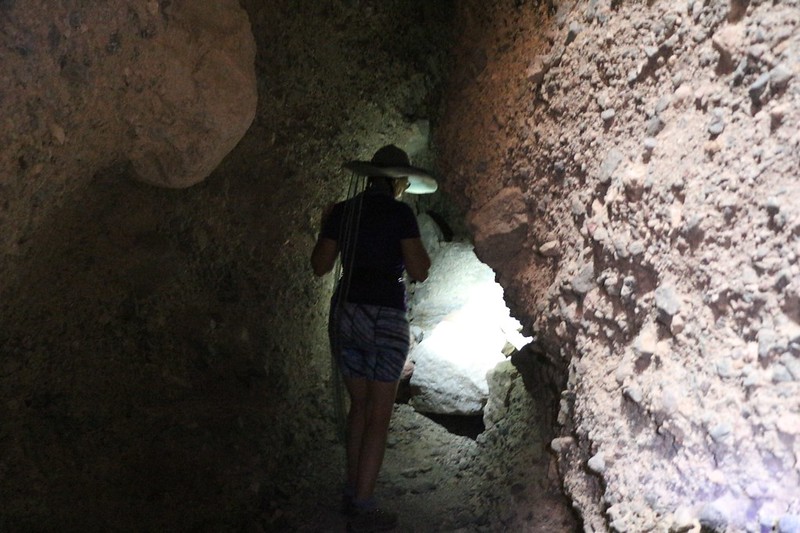 We really needed our headlamps in this part of the slot, Fun! 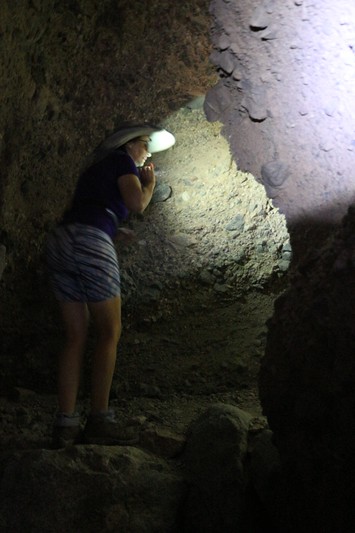 Vicki uses her headlamp as she navigates around a dark corner 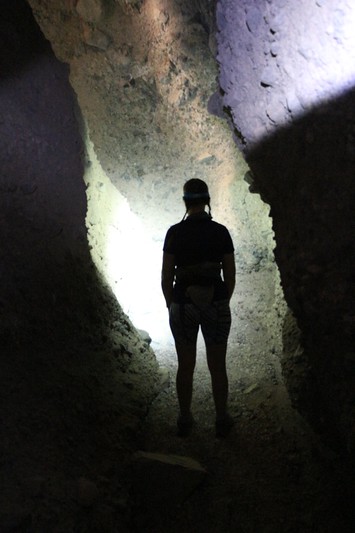 Vicki’s silhouette in the light of her headlamp 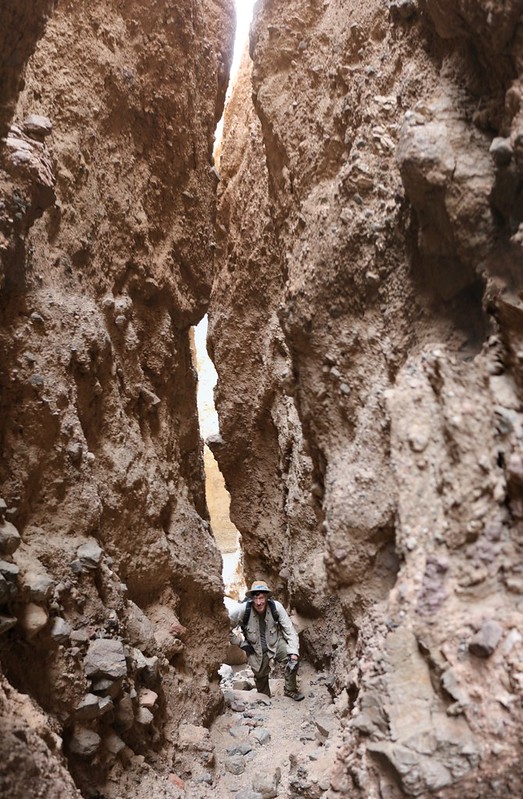 We snuck back out through the chockstones and entered the main Sidewinder Canyon once again.  We turned right, and headed uphill to check out the third side trail, which also was a slot canyon.  And it was very long.  It didn’t get dark, but it was still a lot of fun to hike through.

As we came back down, we heard some voices echoing in the distance.  Soon, we met with two men who were also enjoying the canyon.  We stopped and told them how to find slot canyon two, and how to recognize the chockstones.  I stood back and looked at them with a discerning eye.  They were both big guys, each with the moderate paunch of a thirty-something ex-athlete who enjoys his food and drinks a bit of beer now and then.

“Hmmm,” I said to them.  “Yeah, you’ll probably be able to make it through the squeeze”

“Hey!” they both exclaimed in mock outrage, comically sucking in their guts.  “We’re not that fat!”

We all had a good laugh, and then Vicki and I headed back out to the main canyon.  We both hoped that the two of them made it through to the second canyon, but we never did find out. 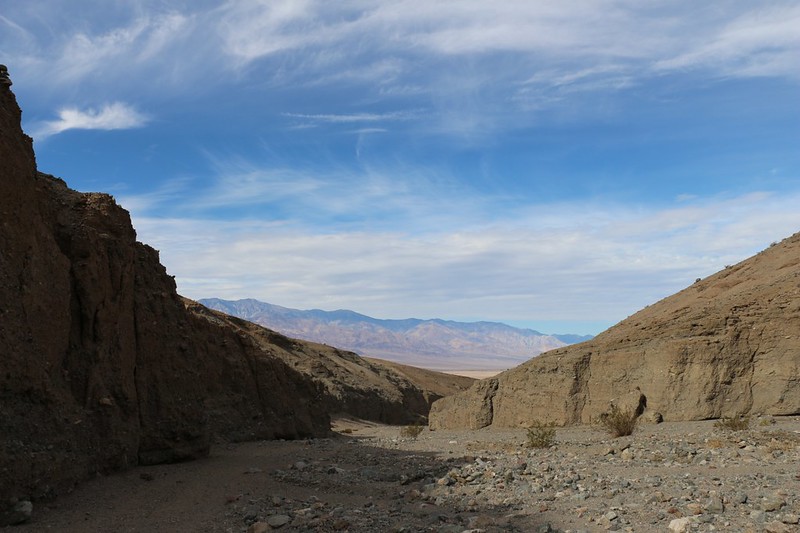 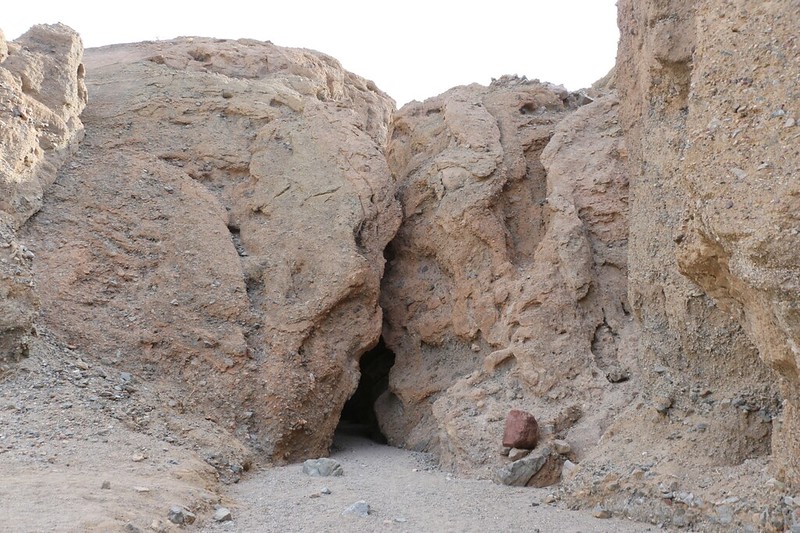 The entrance to Slot Canyon Three

LONG GoPro video as we hike up Slot Canyon Three

Vertical panorama of the deep slot

For the sake of completion, Vicki wanted to head a bit further up the big wash, and so we did, but not all that much further.  It was getting quite hot in the sun by this time, and if there were no more slot canyons up ahead, then what was the point?  So we turned around and headed all the way back down to slot canyon one.

It turned out to be pretty fun, as well, although by this point in the day we were getting used to these slot canyons, and they were beginning to lose their novelty.  How quickly the amazing becomes the usual.  Probably the best thing about this one was that it was cool and shady way down in the slot.  And when we came back out and stood near the mouth of it, the desert breeze was running strong, and cooled us off wonderfully. 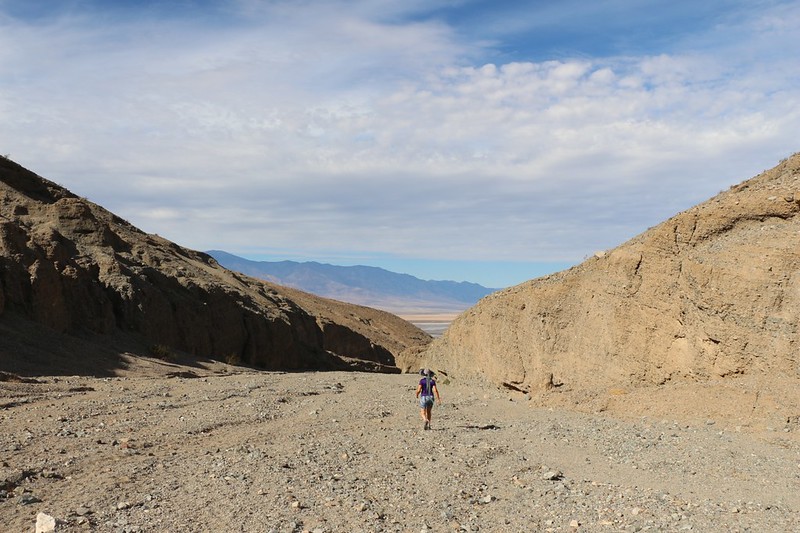 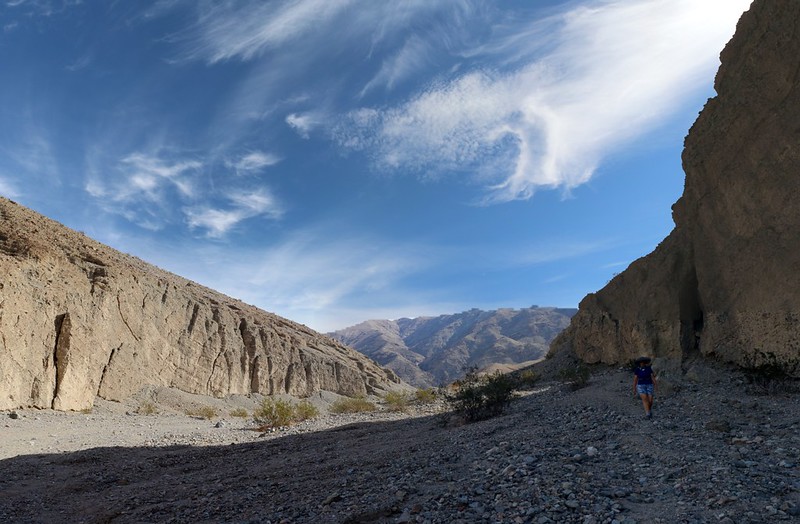 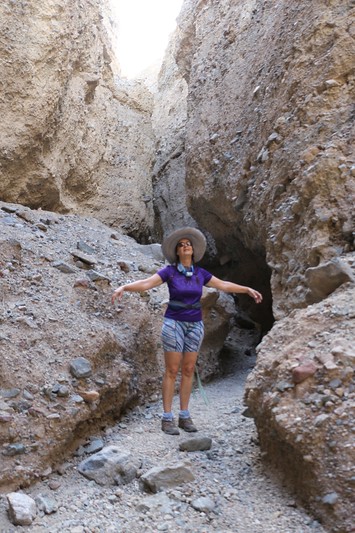 After that, it was simply a matter of walking downhill the rest of the way to the car.  It was hot, but the breeze continued blowing and the high clouds helped obscure some of the heat from the sun.  We love that easy downhill hiking, and before we knew it, our day’s adventure was over. 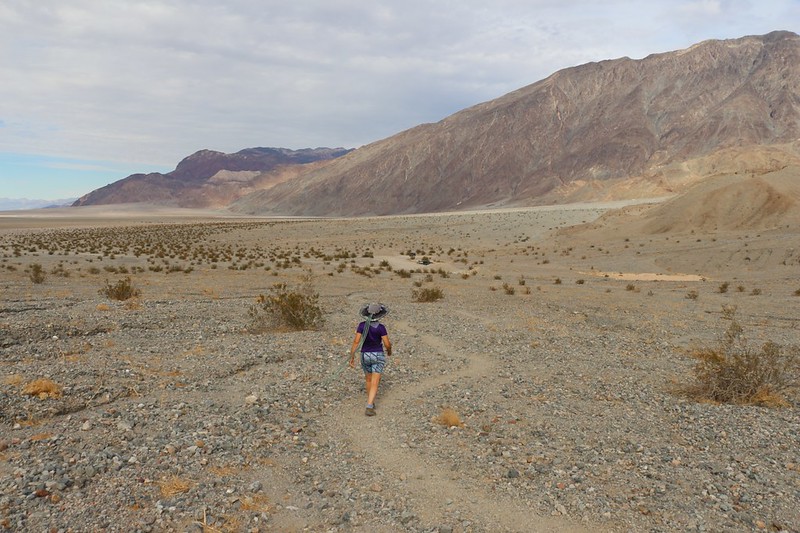 The final hike back to the car

It was still only early afternoon, but we knew that we had a very long drive ahead of us to get back to San Diego.  And it didn’t help that this was Sunday of Thanksgiving weekend,  We knew that traffic would be horrible, but we also didn’t feel like waiting until after dark and getting home by midnight.  We might as well join the throng, we decided.  But at least we’d be able to spend the first part of the drive on the lonely roads of Death Valley National Park. 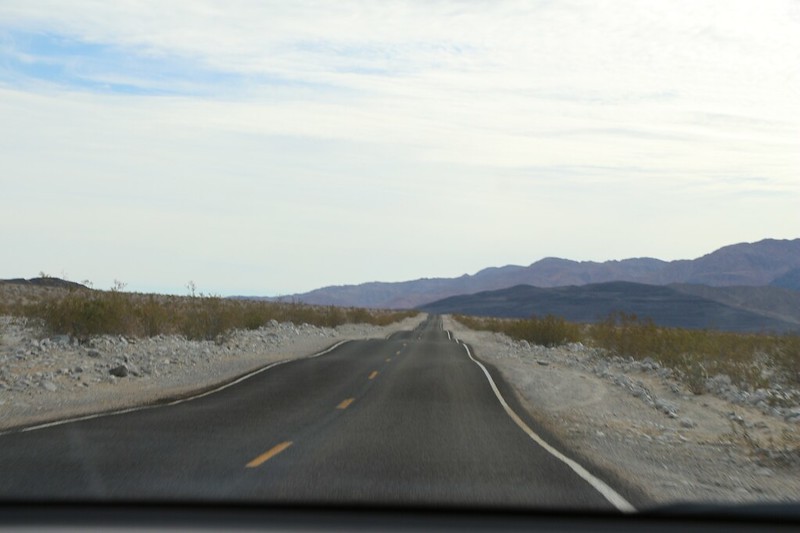 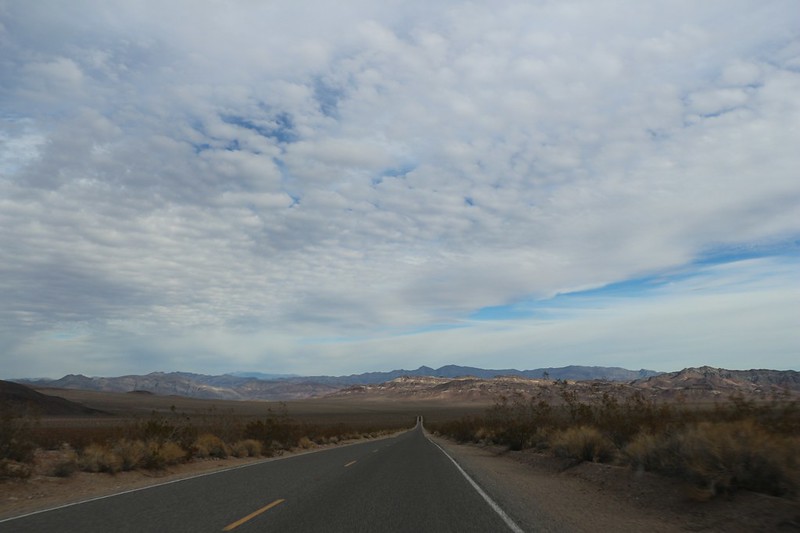 The high clouds and highway as we leave the park, heading down into the Greenwater Valley

As always, we spoke to each other about the trip as we drove home.  Both of us felt good about it.  We were happy that the Rav4 we rented had performed well on the dirt roads and also that we were able to sleep in it comfortably.  I was almost certain to buy one of these within the next year.  In that respect alone the trip was a success.  Meanwhile, the park itself was beautiful, and we lucked out with some fine weather conditions.  Activity-wise, we explored some great places, learned some interesting history, and saw some amazing scenery.  We’d hiked up high at 9000 feet in the snow, and roasted in the sun down below sea level.  We saw some volcanic craters, vast sand dunes, high mountains, barren salt flats, and narrow slot canyons.  Death Valley was truly an excellent place to visit.